The many faces of 'Snake's Cuda

06 Jan 2017
Phil Burgess, NHRA National Dragster Editor
DRAGSTER Insider
Insider readers got such a charge late last year out of James Ibusuki’s detailed recounting of the many faces of the fabled Jungle Jim” Liberman Vega that I’m revisiting the idea again, this time using Don Prudhomme’s first Hot Wheels Barracuda as the subject, but the idea actually originated with Insider regular “Chicago Jon” Hoffman, who sent me his timeline of changes to the fabled Cuda. I shared them with Ibusuki who, as it turns out, also had a deep and well-researched interest in the car. I’ve shared both of their comments below the grouping of photos that Hoffman had gathered from various sources across the internet.
While it’s certainly far from being the first Funny Car, it is the car that launched Prudhomme’s name – and that of teammate Tom McEwen – into the national consciousness as the Hot Wheels toys modeled after them were soon tearing across plastic orange “dragstrips” in homes across the nation. The Hot Wheels deal that McEwen brokered with toy giant Mattel really opened the Pandora’s Box of possibilities for corporate sponsorships of racecars, so it’s a cool car at which to take an in-depth look, and Ibusuki and Hoffman clearly have done that.
Before we get into the many changes that helped the car evolve, Ibusuki shared some thoughts about the body itself, which will serve as a bit of a spotters guide for your own research.

“As you know, 1970 ushered in a new-style Cuda,” he noted. “The Fiberglass Trends (which I’ll refer to now as ftrends) version was more stock and bulky looking than the Fiberglass Ltd. (LTD) bodies. The ftrends had a 3D grille while the LTDs were flat. Additionally, the ftrends bodies looked heavier because their sides were taller and curled under at the rocker panels like an OEM Cuda. The LTD sides were flatter by comparison. Further, the ftrends had more OEM looking wheelwells while the LTDs cut higher upward towards the hood. They were also closer to the front bumpers. The overall effect made the LTDs look slimmer than their ftrends counterparts. I share this background so you can see the major differences between the first and second Hot Wheels Cudas. Look at this photo of Candies & Hughes vs. the Snake-Jay Howell at '70 Indy. You can see how the C&H car looks slimmer and ‘the Snake’ a bit more bulkier. I want to say how fun it is to play detective and analyze these old photos. If you scrutinize them enough they begin to reveal things you missed the first time. With that in mind let's get started!” 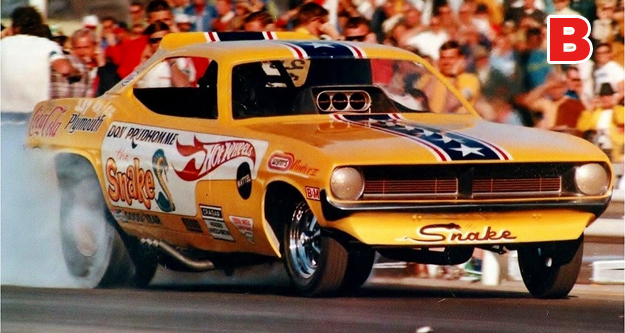 HOFFMAN: With Photos A and B, we see the Mattel ball change colors (from red to black), while the “flip me at halftrack” roof dam stays put. Also, A has a windshield I've yet to see (small port and a recessed-effect as well) while B has the conventional opening.

IBUSUKI: Photo A shows the original Mattel logo. Here's a larger view of the old and new logos for context. As you can see it's a little boy, wearing a crown, and sitting on the letter M. (By the way, I just learned that the Mattel name was derived from the original owners: Harold "Matt" Matson and Elliot Handler!  Mattel's ad department wisely changed the logo to the more simple design right about the time the Hot Wheels Funny Cars debuted.  Hence, we see the old logo at Beeline, the new one at Pomona as show in Photo B. But for whatever reason the "gear teeth" were left off the Funny Cars —they were simple black circles.
As we all know, the roof-mounted spoilers were ineffective (in fact, downright dangerous as they made the rear ends want to lift!) so after Pomona both Hot Wheels Funny Cars moved the rear spoilers to the standard rear deck location.
I don't know the science behind the wide-open windshield holes and small slots. During this period, teams tried a variety of doghouse openings. I've also seen three holes elsewhere while Roger Lindamood mounted the scoop backwards with no opening at all!  But apparently Prudhomme went back and forth between the slot and "no slot" configurations. I say this because the slot is small at Beeline, then gone at Pomona, but back with a larger slot later that year (see Photo H below).  I assumed “the Snake” had dropped the "Lexan slot" after the Springnationals until I found a few Indy pix. The "slot" was still being used in September! Then I found a tiny pic in National Dragster of “the Snake” at Irwindale's October East vs. West bash and I do believe the slot is still there!

HOFFMAN: Photo C shows that the roof dam is gone, which probably did not please Hot Wheels at all (remember the scene in American Nitro when “the ‘Goose” says that kids will write letters going "That’s not how the car is!"), as the toy still looked like Photo D below. Another thing shows up: a Plymouth logo in the grille that will comes and goes over time.

HOFFMAN: With E, we see a black 712 is on the roof. Prudhomme’s NHRA competition number will float all over the place, but with three circuits back then, the non-NHRA races would have other numbers "soaped-on.” 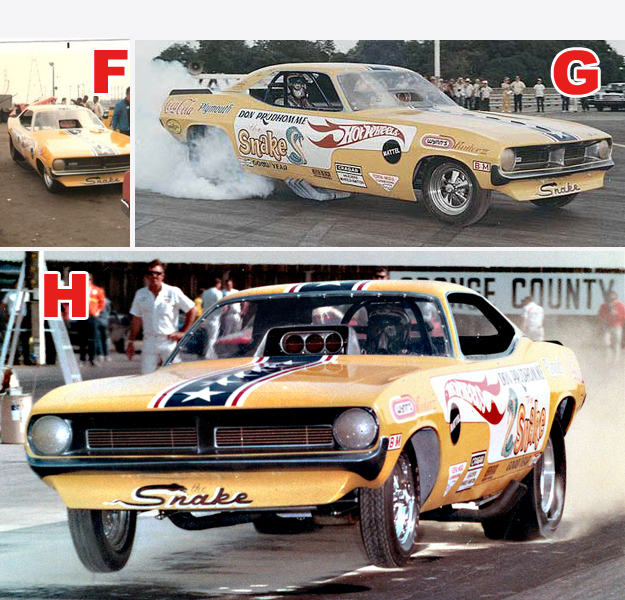 HOFFMAN: Photos F and G: more blower-hole stuff, large versus small, but Photo H has the Plymouth in the grille, and no “mystery logo” on the hood’s lower right (as visible in Photo C).

HOFFMAN: When I saw Photo I, shot at Ontario Motor Speedway, I thought "photo-shoot for the box art" for the Hot Wheels playset but the roof dams are gone, both have different blower holes, neither match the Funny Car Set at all (and what the flop is going on under “Snake’s” car?), and the notion of it being press-work for the inaugural ’70 Supernationals at OMS is complicated by the debut of the ’71 car, as noted below. 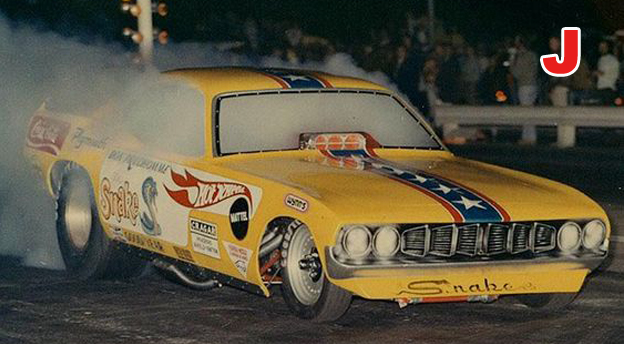 HOFFMAN: This is the '71 Buttera car, cloaked in '70 livery, which was rolled out at the OCIR Manufacturers Meet in advance of the Supernationals with the awesome Kenny Youngblood grille (how great were those?)
IBUSUKI: As Jon said, the second “Snake” Hot Wheels debuted at the '70 Manufacturers Meet. Although the first Hot Wheels Cuda had a dragster roll cage its Exhibition Engineering chassis was still wide like the old Logghes. The new “Snake Cuda” was a narrow Buttera design—essentially a copy of Don Schumacher’s 1970 Indy winner, including its independent front end.  I just read Drag Racing USA's feature on the second Snake Cuda, which said it was a Mr. Ed body. I'm not totally convinced but my key point remains that the second “Snake” Cuda had a more "slim LTD style" body as we see in Photo J.
The Manufacturers Meet was held on the first weekend of November (6-7). The AHRA Grand American Finals was probably held the next week since SS&DI said the Beeline event took place in November. We know the inaugural Supernationals was held on Nov. 21-22 and I don't believe AHRA waited until Nov. 29 for their final race. 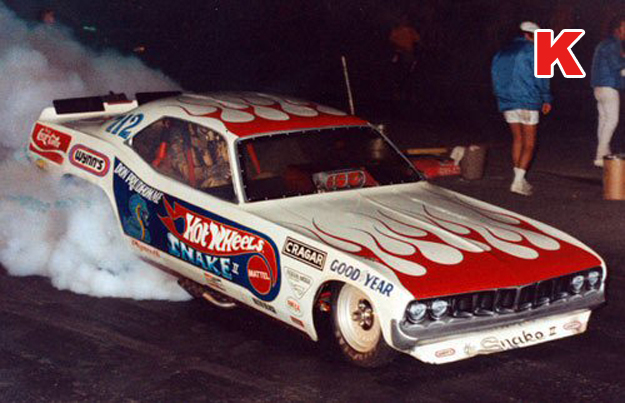 IBUSUKI: Jon mistakenly called the grille the airbrush work of Kenny Youngblood. It was actually the work of Tom Kelly, who was most often associated with George Cerny's paint jobs. Tom created the iconic Candies & Hughes script logo, first seen on their '69 Cuda. While Kelly was a fantastic letterer, his airbrush grilles were not up to Kenny's superb standards.  For some odd reason Kelly decided to angle outward the six grille segments of the '71 Cuda (three pointed to the right, three to the left). Take a peek at Youngblood’s same-season Cuda grille in Photo K above.

This is the replacement body after Prudhomme’s infamous Seattle "in the lights" explosion-wheelie. Notice how more realistic Youngblood's version looked. Additionally, Kelly tried to make his headlights appear as if they were turned on. Note the extra whiteness of the lenses along with the surrounding white rays of light in Photo J!
Kelly's '71 style grilles were also seen on Jim Dunn's first Funny Car and Joe Winter's yellow Swinger I Cuda while Youngblood's versions were featured on Schumacher’s red-white-blue '71 Winternationals Stardust and the Midnight Skulker.
I did a bit of a "flash forward" by showing you the '71 flamed Hot Wheels Cuda. So let's back up a bit. After the yellow version raced at the major fall '70 events it was repainted for the new season. The red-white-blue Hot Wheels debuted at Irwindale's New Year’s Day event. This was mentioned in Drag Racing’s USA’s event coverage. Because Tom Kelly's grillework was carried over to the new paint job it's easy to separate the first '71 Hot Wheels Snake from its post-SIR replacement due to Youngblood's grille.
Also, notice the prototype Cragar Super Trick front wheels on the Cuda. They were new for '71. McEwen and Snow ran them too. Their polished center hubs made them stand out from the finished product that would debut in '72, most notably on the first Revellution Demon. Speaking of front wheels I always wondered why the "fashion-forward" “Snake” and “Mongoose” both ran outdated Cragar S/S wheels in 1970.  They were very popular from '65 to '67 but Halibrands and Americans became the Funny Car standards at the end of the '60s. However, now in hindsight I think the wheels were part of a Cragar support package. If you read under the Cragar logo they also supplied headers and ignition, but the new Super Tricks that would dominate Funny Car for decades weren't ready in early 1970!

And finally, there’s this, from “Chicago Jon”: “Just to please the National Enquirer-fans out there, recently on Facebook a rumor of the original “Snake” 1970 car surfacing has broken loose, as seen above (photo is believed to have been taken by Bigfoot, who was on his way to the Wendy’s on the grassy knoll, where he was to dine with Elvis).”
It sure looks like it could be the right body, and it would be super cool if it were, but it also could just as easily been any old Cuda with the spoiler added. Maybe someone out there who knows can tell us more about. We know that “Snake” had the yellow Buttera car and the white ’71 car (yep, that’s me having a dream-come-true seat in the car) in his possession but not the roof-spoilered body.
Anyway, thanks to much to Jon and James for this run-through of one of the sport’s memorable and important cars and all of the changes it went through in its first 10 months of life. I’ll see you guys next week.