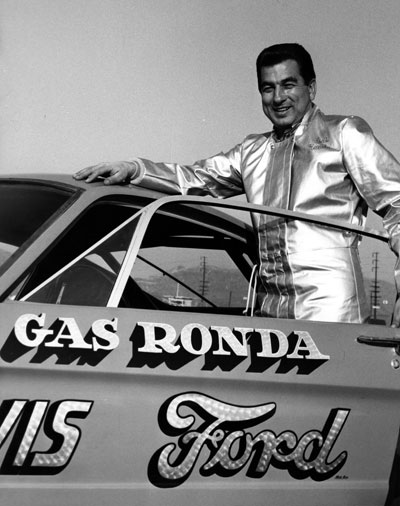 Writing about heroes of the sport that we have lost has always been a curse and a blessing of this column. Naturally, any time that I have to do a “Remembering …” column it’s because time or fate has caught up to one of our heroes and one more connection to the sport’s history has been severed.

On the positive side, I’m able to give them at least one more shot of glory and have the chance to tell their stories one more time either to old friends or fans or to introduce them to newer fans. Then, of course, there’s the feedback I get from his or her family, friends, and fans, who allow me to share more about their lives and careers.

Certainly, that has been the case with Gas Ronda, who passed away last week, and the outpouring of admiration for the man that I’ve seen in my email and online has been impressive.

People whose paths he crossed never forgot him, for not only being a tough racer but also a true gentleman racer. More than a few remembered him as being one of our sport’s most dapper personalities; always well-dressed and well-groomed. (I have one word to describe Gas Ronda: Smooth,” wrote Dick Pruett.). He looked, as his son, Gas Jr., described him to me last week, like Cary Grant whenever he entered a room.

Bob Park’s tie to Ronda was an interesting one. As a teenager he dated the friend of the daughter of early Ronda partner, Les Ritchey, and many of their double dates ended up a Ronda’s restaurant, the Gas House, a popular establishment right on Interstate 10 in Covina. “We spent many Friday and Saturday nights at the Gas House and Gas was a very gracious host,” he remembered. “That was a heyday for racers in the San Gabriel Valley area. You could go five minutes in any direction and there would be racers. From Top Fuel cars to bracket racers. RIP Gas, I think I will put on some platform shoes and an open shirt to honor Gas. I can claim it was a Halloween costume.”

Bob Lastiri knew Ronda from their shared days in the Hayward Head Hunters club back in the late 1970s. “He was racing a Buick in stock class,” he recalled. “Our club was competition cars only, but we made an exception for him because he was a true racer and took it seriously.”

So, as you can see, there was a lot of good memories associated with Gas Ronda, and many more I’m sure will be shared at the celebration of life that the family has planned for Nov 16 in Palm Desert, Calif. After an 11 a.m. service at Sacred Heart Catholic Church, everyone will adjourn to the banquet room there to continue to celebrate him. Both events are open to the public, so if you were a fan or a friend or just want to honor the man, please feel free to stop by. 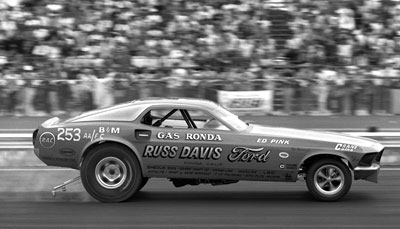 I also to Skip Burroughs, who was Ronda’s only fulltime crewmember through the 1969 and aborted 1970 season and the Funny Car fire that ended Ronda’s driving career.

Although Ronda mostly ran the Funny Car on the West Coast, from Southern California up to Washington state, the team did head eats to compete at the 1969 Springnationals at Dallas Int’l Motor Speedway (pictured at right), and then on to a scheduled match race in Corpus Christi with Texan “Flash Gordon” Mineo, a race that never came off as they carved three-inch-deep furrows into newly-poured and apparently not-yet cured asphalt in some pre-event testing burnouts.

“One time we were at a meet in Spokane, Wash., and the day before, we made a promo appearance at the local Ford dealer downtown,” he remembered. “The car was on the showroom floor on display along with Gas and I. After the dealership closed, the owner coerced us to fire the engine so he may hear it run. Reluctantly, Gas agreed. The showroom was old school with the glass panels above the sales booths. We cranked the engine with some gasoline we used to prime the engine, then Gas blipped the throttle. It shattered one of the glass panels. Another day at the office! The blast from the zoomie was pretty powerful, not to mention the noise in an enclosed space.”

The highlight of their time together was their huge late-1969 victory at the Manufacturers Championship at Orange County Int’l Raceway, which was especially memorable to Burroughs for another reason.

“Ed Pink built a new engine for competition for [that race],” he recalled. “On the first day of qualifying and on the first run, I had left the warm-up pill [jet] in the fuel injection and on that run the engine was lean and we damaged the new engine. The old engine had 105 runs on it and was tired. We went back to the shop and installed the old engine. We returned the next day and qualified. It was a better day for us than others thought having overcome this error. Gracious Gas was forgiving of me. I’m very grateful to Gas for our friendship and the hours of conversation we had together. I have a deep respect for this man and I am praying for his family. He was a true mentor and his teachings gave me a foundation for success.” 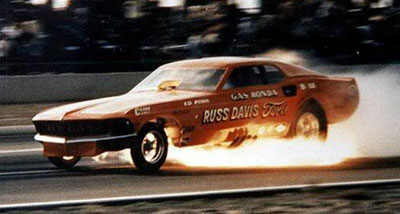 The success of the 1969 season turned into horror early the next season at Beeline Dragway just outside of Phoenix. According to Burroughs, on that fateful qualifying pass, the engine’s left head gasket pushed out, and the jet of flame burned a hole in the nylon line that went from the transmission to the dash-mounted pressure gauge. The highly flammable trans fluid burned a hole in the firewall at Ronda’s feet, severely burning his left leg and other parts of his body.

“There was no Safety Safari like we have today, and we were actually the first ones to get to Gas,” Burroughs remembers painfully. “He had gotten out of the car on his own [popping out of the escape hatch and bailing out of the car even as it rolled down the track] and was just standing there in shock. I could cry right now just thinking about it.”

Ronda was taken to a local hospital, then transferred by Lear jet – which was gutted of its seats to accommodate him -- to a Southern California burn center.

Even though he was just nine, Ronda’s son remembers that time very well.

“I remember that I was with my grandparents when they got a telephone call, and I remember them looking very concerned and distraught,” he recalled. “They gave the phone to me and it was my mom on the other end of the line and she told me that my dad had been in an accident with the race car and had been burned very badly.”

“He finally realized that he needed to get out. He told me later that his father had never approved of him racing cars and that he when he came to see him in the hospital after the fire he said, ‘Are you happy now? Look what you’ve done to yourself.’ He promised his father that he would get out.”

Ronda spent almost a year recovering from the burns, including numerous reconstructive surgeries. He put a couple of different drivers (Dick Poll and Charlie Allen) into a new Funny Car to fulfill match-race obligations, but even with “Famous Amos” Satterlee tuning, the car never reached its true potential and Ronda retired completely from the sport and into the restaurant business.

“I remember that when he opened the Gas House, it was in a location that had never been successful for any of the previous businesses at that location, but he did,” said his son. “He became very successful and ran it for about 16 years before retiring. He was a great businessman.”

And a great racer and hero to many of us. Thanks to all who shared and cared.