I was one of the very few still there on a Monday in Montreal in 1987, when John Force finally broke through for his first NHRA Funny Car win after nine painful runner-ups, and I was there in Dallas in 2011 when Bob Vandergriff Jr. ended his NHRA-record-long 13-runner-up string to get his first Top Fuel win, and as a wonderful and cherished as those memories are, I’m going to have a hard time forgetting the giddy joy I felt when I watched Clay Millican cross the finish line ahead of Leah Pritchett to win the 2017 NHRA Thunder Valley Nationals.

I can remember Force and crew chief Austin Coil, the perpetual bridesmaids, holding a sign in the Montreal winner’s circle that read “Just Married” and I can remember racing out of the tower and onto the still-sticky Texas Motorplex track to snap the photo at right, wading into a sea of fans who swamped Vandergriff as, true to his promise, he ran back up the track to meet his crew.

Both of those are special moments to me, but seeing Millican, his eyes red with tears, mount the stage in front of the Bristol Dragway tower to be serenaded by the fans (and singing heartily along) as the PA blasted “Rocky Top,” one of Tennessee’s official state songs ("Wish that I was on ol' Rocky Top, Down in the Tennessee hills …”), as the homestate hero pumped his Wally-clenched fist in time with the chorus, had me all welled up with tears, too. 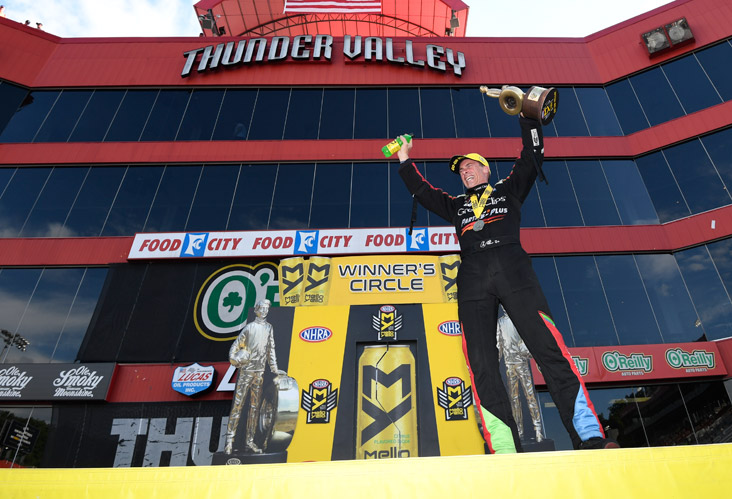 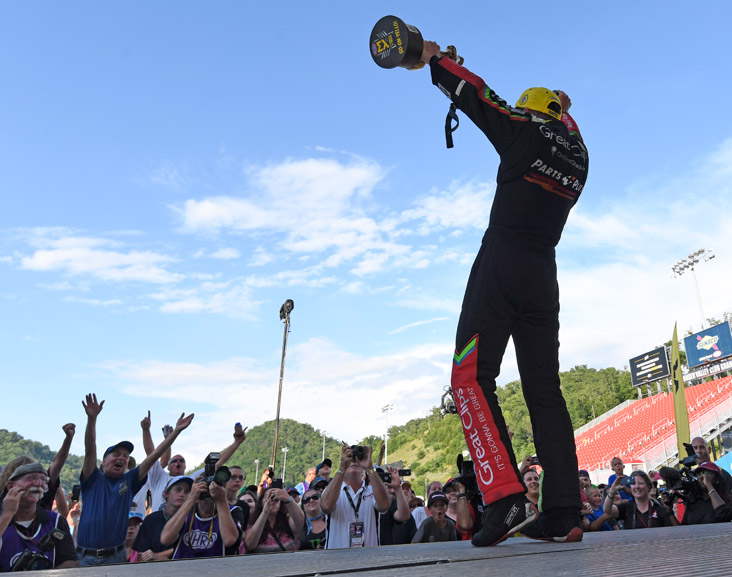 Judging by the outpouring of love shown by the clamoring fans before Millican on the stage -- many holding signs honoring him –- and on social media, where most of his peers all offered their congratulations, it’s likely there are not many more celebrated wins than Millican’s. We’re all supposed to be impartial in the pressroom, but I saw a dozen fists fly into the air -– including my own -– when his win light came on in the final.

It was Clay’s 11th final-round try – two of those came in the Four-Wide Nationals, where he finished fourth and didn’t even get a runner-up to add to his stats – and long overdue, seeing as how he began racing with NHRA way back in 1998 (253 races ago) and especially because of his tremendous success on the IHRA side, where he has six season championships and 51 wins.

No one, including him, could ever explain why he couldn’t go the distance in NHRA, but, ever the good sport, he kept on answering the “When are you going to win?” questions with grace and tact. That’s who he is. Through all the close calls and all the frustrations, he remained one of the nicest, humblest, most approachable guys in our sport, and I always made an effort to stop by and see him at every race, even just to say hello and soak up that “Milli-can” attitude that spawned its own t-shirt design.

The 1998 season is not really nostalgic and in the wheelhouse of this column or its history-hungry loyal readers, but I thought I’d share some of my favorite Clay Millican photos from that that point forward. 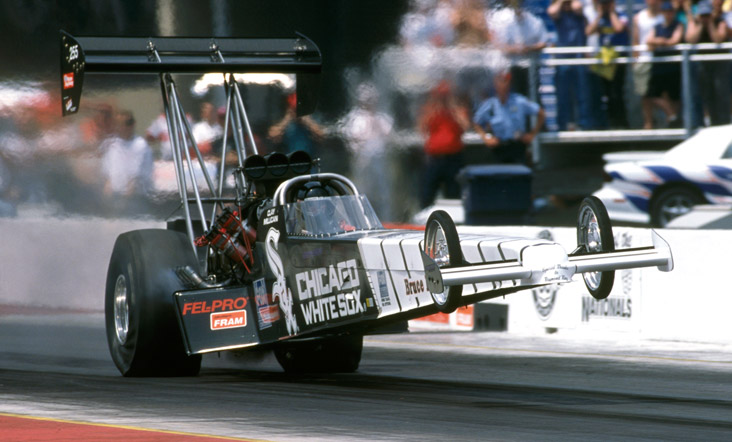 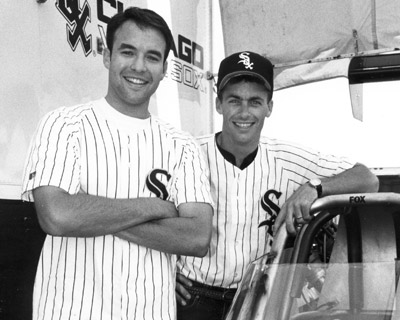 As the legend goes, Millican was just a humble sportsman racer, who spent more time behind the wheel of a forklift at a Kroger supermarket than he ever did in his IHRA Modified eliminator car. Then Peter Lehman came calling, and offered Millican the chance to fulfill a dream of driving a Top Fuel dragster. They debuted at the 1988 Chicago event with backing from the Chicago White Sox, but failed to qualify.

He ran three more NHRA races total in 1999 and 2000 and failed to qualify at two of them, but was enjoying success on the IHRA trail. He was rookie of the year in 2001 and driver of the year in 2001, when he won the first of six consecutive championships. 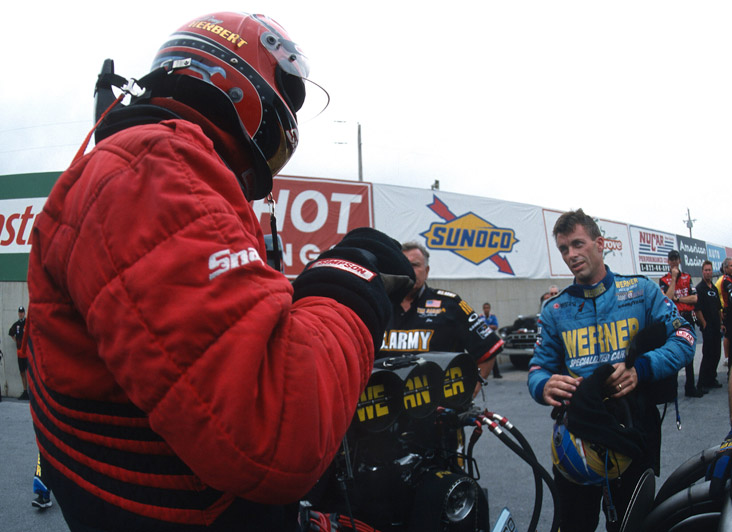 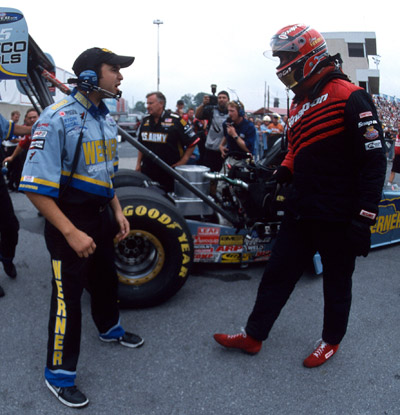 Anyone who was there won’t soon forget Millican’s heated exchange with Doug Herbert at the 2002 Reading event. The two had just engaged in an epic two-minute burndown on the starting line –- both refusing to stage before the other -– before a very unhappy and extremely animated Chief Starter Rick Stewart shut them off and had their cars pushed off the line.

Herbert got out of his car and expressed his displeasure with Millican, who wisely had stayed on the other side of his car. Remember now that "DougZilla" goes 6-foot-4 and 220 pounds and Millican is 5-foot-8 and 145 pounds dripping wet. Then Lehman, no Incredible Hulk himself, jumped in and shoved Herbert, as shown at right. A near brawl broke out, with Millican leaping to his team owner’s defense before NHRA security interceded. Good stuff.

The two didn't speak for a long time but later became friends, and Millican was a strong supporter of Herbert's B.R.A.K.E.S. program, which he started after his young sons, Jon and James, were killed in a highway accident in 2008. Ironically, Millican would lose his son, Dalton, in a highway accident in August 2015, which made his Bristol win, which fell on Father's Day, all the more poignant. 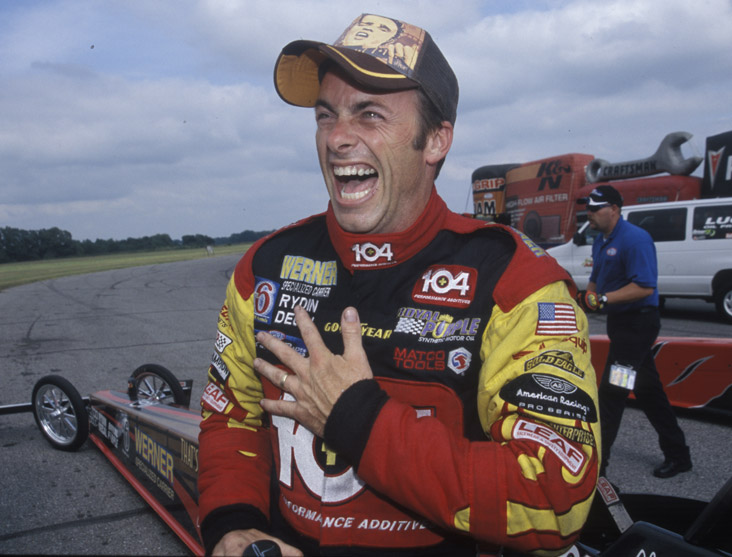 Millican’s first three runner-ups in NHRA competition came all in a row in 2004 – Houston, Atlanta, and Bristol. When I interviewed Clay earlier this year in Houston, on what was the 13th anniversary of his first final, he told me, somewhat prophetically, “At the time, I wasn’t too concerned about it. I remember rolling into Houston fresh off a win at an IHRA race. We assumed with 50 wins under our belt that our first NHRA win wasn’t going to take long. We were wrong.

“I never thought that 13 years later we would still be wondering when our first NHRA win would finally come to us. Our team is doing a great job and working really hard. I am confident this is our year.” 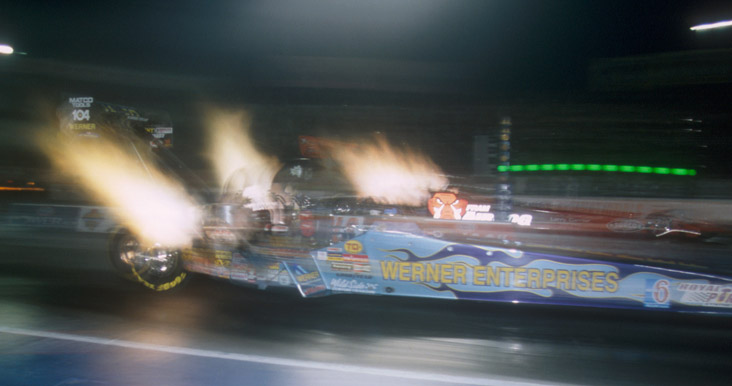 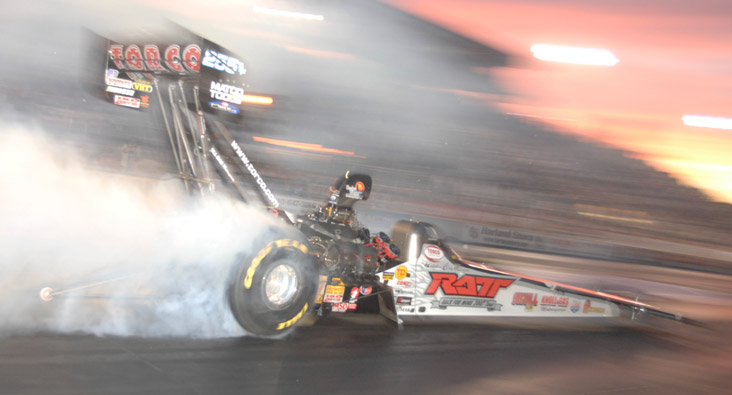 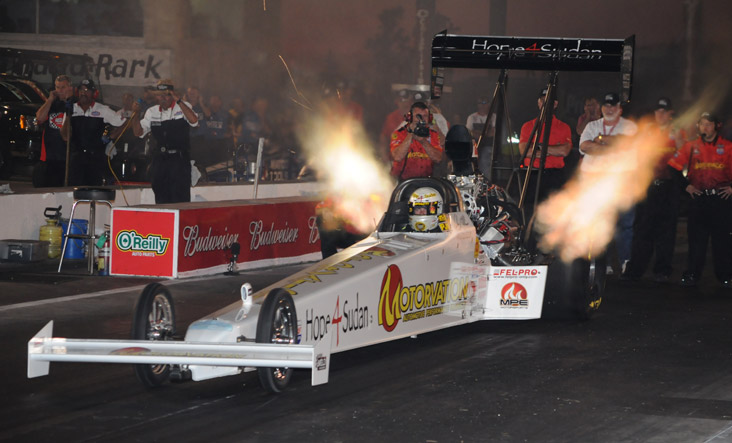 It would be five years and 129 events before he’d reach another NHRA final, in Topeka in 2009, after wheeling a number of cars with quality sponsors like Werner Enterprises, 104+ Octane Boost, Nitro Fish, Motorvation, Knoll Gas, the rock band RATT ("World tour 2007!"), and LifeLock, and quality tuners like Mike Kloeber, Johnny West, and Lance Larsen (who is still with him). 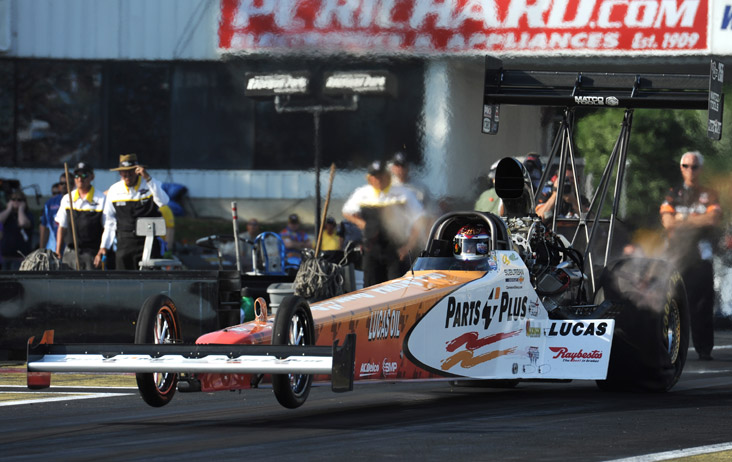 It would be almost another four years and 100 races -– Gainesville 2013 –- before Millican reached another final, but in the meantime, beginning in 2009, he picked up the sponsorship of Parts Plus, which remains with him today. 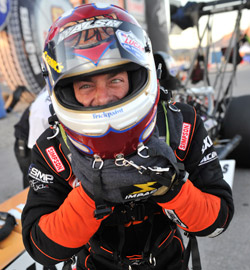 Millican didn’t win that Gainesville final (obviously), losing there to Antron Brown (who would twice stop Millican; Tony Schumacher being the other repeat offender), and he reached three more finals that year, in Chicago, Brainerd, and Las Vegas 2.

He took the losses painfully but graciously, always looking towards the next race as “maybe the one,” and you could tell how much he loved just driving. For him, losing was a part of trying to win, and, as he said so many times, how could he be sad when his job was to “stomp on that loud pedal.”

Even if you weren’t seeing his trademark grin and head-thrown-back laugh in the pits, you could see it in his eyes when he strapped on that helmet that he was loving life. 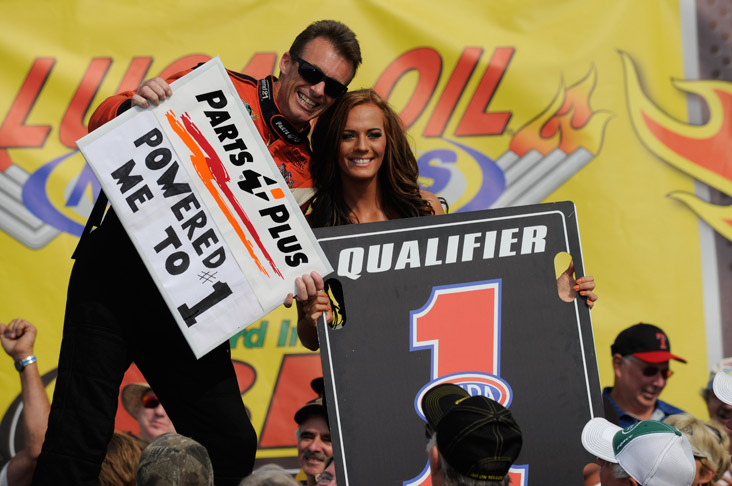 The performance was becoming to come around in that 2013 season, where Millican grabbed his first NHRA No. 1 qualifying berths, in Englishtown and Brainerd, added another in Charlotte 2 in 2015 and two last year, in Indy and Vegas 2. Joining with car owner Doug Stringer and having veteran Dave Grubnic on board were the last key pieces of the puzzle. 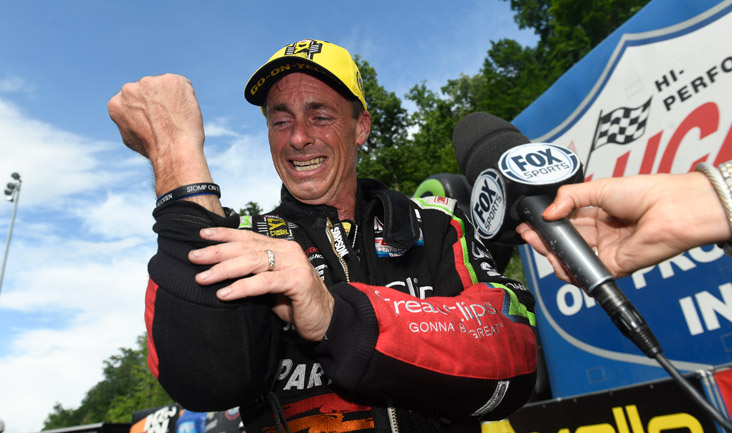 Which brings us to last Sunday. I’ve seen Millican weave his way through eliminations many times, only to get stopped short, maybe in the semi’s, maybe in the finals, and my heart sank a little each time. I’m not saying that all of his Top Fuel peers wanted him to beat them in Bristol, but they’re not crying in their beers either. The outpouring of emotion –- that, obviously, began with Millican at the top end, crying on TV -- swelled through Bristol Dragway. It felt like a community event for the NHRA world, and lifted us all. 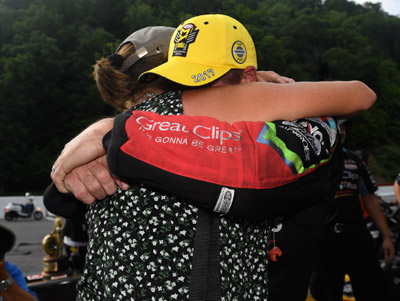 Runner-up Leah Pritchett hugged him, as did her car owner Don Schumacher, as well as fellow winners Ron Capps and Alex Laughlin. The crew smothered him, and he hugged wife Donna like he’d never let her go as he cried into her shoulder -- crying for their shared victory as much as their shared loss and the end of a long journey. It was a touching moment.

I’m not sure how many people he’d hugged before he left the stage after finally getting his Wally, but I’m going to guess several hundred (including me … awww).

As he was being serenaded by "Rocky Top," he kept yelling above the music to the cheering and singing fans, “Thank you! Thank you!” and one fan down front yelled back loud and clear, “No, thank you!”

I couldn’t agree more. Thanks for taking us on the ride with you, Clay, and, especially, thanks for winning. Congrats, buddy. 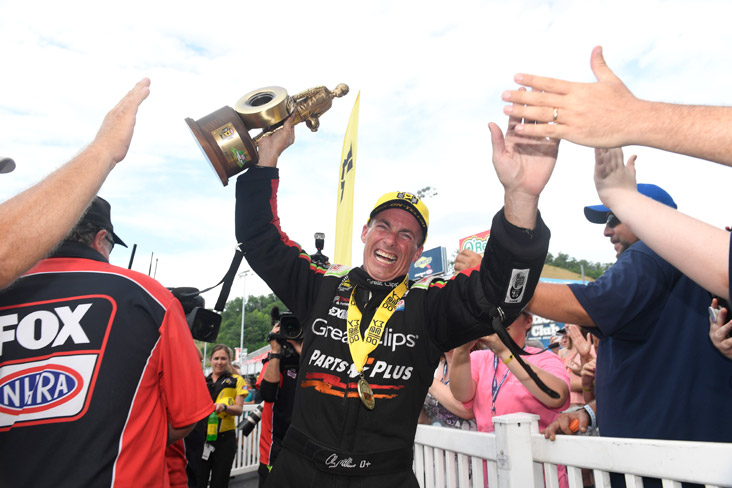