Hot rodding with the Beach Boys

I’m a big ol’ Beach Boys fanboy from way back, and, because they truly are America’s band, they get a lot of play on the Fourth, which is just fine with me. Earlier this week they were again part of the “A Capitol Fourth” concert on the West Lawn of the U.S. Capitol and a series of documentaries and old concerts played over the last week on the AXS TV cable channel.

The Beach Boys, of course, made their big splash with surf music (despite the fact that only one of them, drummer Dennis Wilson, actually surfed) but were encouraged to expand their reach beyond the beach. Me, I practically grew up in the surf on Southern California’s beaches and fell in love with surfer girls –- the whole nine yards -– so I definitely could relate better than, say, kids in Kansas. This was not lost on the group.

To broaden their popularity, they branched out into writing and singing about hot rods, with tunes like “Little Deuce Coupe,” “Shut Down,” and “409,” all great songs packed with lyrics that we all can appreciate with just enough gearhead talk for those of us who know what they were talking about to feel just a little more superior than the guy down the block. We were insiders to their world. When they told us that the Little Deuce Coupe’s flathead mill had been ported and relieved and stroked and bored, we knew they weren’t talking about surfer girls (or were they?).

The brothers Wilson (again, with the exception of Dennis) also weren't big hot rodders, but got help from a couple of local gearheads in singer/songwriter/producer Gary Usher and KFWB radio disc jockey Roger Christian.

Wilson owned up to all of that in his wonderful book, I Am Brian Wilson. “I didn’t know so much about cars," he wrote. "I knew what a 409 was because of the song Gary wrote with us, and I was hip to everything from customs to rails because of 'Car Crazy Cutie,' but I couldn’t tell you exactly what a power shift in second was. Dennis knew more. He worked on cars when we were younger and raced them when we were older.”

According to William McKeen’s encyclopedic book, Everybody Had an Ocean: Music and Mayhem in 1960s Los Angeles, Usher produced and performed on records for bands that did not exist outside the studio, including the Tri-Five (Carl and Dennis Wilson), the Sunsets, the Competitors, the Roadsters, the Super Stocks, the Roadrunners, and the Ed "Big Daddy" Roth-led Mr. Gasser and the Weirdos and during one month wrote and recorded more than 50 car-related songs.

Interestingly, even though Usher penned the ode to the “four-speed, dual quad, positraction 409” as his dream car, he never owned one.

“By that time I had purchased a new 426 Plymouth Hemi Superstock,” he told McKeen. “By the time I had 'saved my dimes,' the 426 was considerably faster. I should have won many events at the San Fernando dragstrip with my 426 and a young, exuberant Dennis Wilson by my side."

The exhaust sounds of the track are from Usher’s 348 W block Impala, recorded on Brian Wilson’s ever-ready Wollensak tape recorder, which he reportedly lugged to the curb in front of his Hawthorne, Calif., house, stretching an extension cord to its limit. The exhaust sounds were created long before the song. 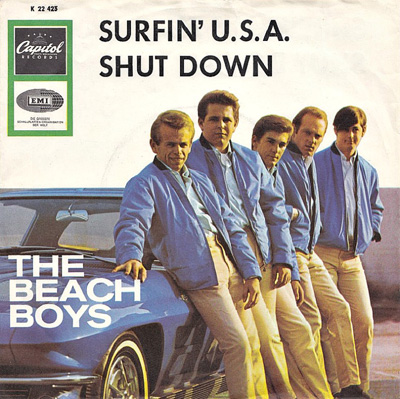 “Shut Down,” regarded as Brian Wilson’s “greatest asphalt drama," was the B-side of "Surfin' U.S.A." and details a race between the protagonist’s fuel-injected ‘63 Corvette Stingray and a 413-powered Dodge Dart 330.

The Beach Boys had other great car songs like the Christian co-written "Car Crazy Cutie, " "Cherry, Cherry Coupe," and "No-Go Showboat,” as well as Brian Wilson/Mike Love collaborations like the unforgettable “"Don’t Worry Baby" (“I guess I should've kept my mouth shut when I started to brag about my car”), plus the classic “I Get Around (“We always take my car ‘cause it’s never been beat”) as well as "This Car of Mine" and "Custom Machine."

I wrote a column a few years ago about hot-rodding songs that I have imported into the new NHRA.com as part of Project Protect (OK, I made that title up), my-long-running and painstaking attempt to get all 10 years of Dragster Insider transferred to the new site (I whined about this earlier this year in this column).

It’s going pretty well -- I think I’m about halfway done –- and has unearthed some great (if I do say so myself) old columns even I had forgotten about. I’ll share some of that work with you next week.

Until then, Tach it up, tach it up, buddy gonna shut you down …