Pro Stock icon Bob Glidden, one of the most dominant forces in the history of NHRA Drag Racing, died Dec. 17. He was 73. In a star-studded career that spanned more than 25 years in the class, Glidden won 85 events and 10 season championships.
17 Dec 2017
NHRA National Dragster staff
News

Pro Stock icon Bob Glidden, one of the most dominant forces in the history of NHRA Drag Racing, died Dec. 17. He was 73. In a star-studded career that spanned more than 25 years in the class, Glidden won 85 events and 10 season championships and was voted No. 4 on the list of Top 50 racers from NHRA's first 50 years in 2000. 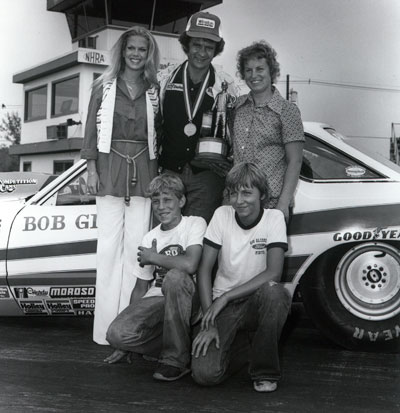 “Everyone in the NHRA community is saddened to learn the news of Bob’s passing," said NHRA President Peter Clifford. "He was a true competitor who left a lasting legacy of excellence both on and off the track. Our thoughts, prayers and deepest condolences are with the Glidden family at this difficult time.”

When asked to what he attributed his success, Glidden once said, "Common sense and the will to survive. I know that I have to hustle to win and that I have to go all out to afford to race."

A Ford campaigner from the beginning, Glidden's success in Pro Stock stemmed from his apprenticeship in Stock and Super Stock. He campaigned a series of 427 Fairlanes before switching to the more potent 428 Cobra Jet Mustangs in 1968. With valuable sponsorship from Ed Martin Ford, where he worked as a line mechanic, Glidden became one of Division 3's most prolific winners before turning Pro in late 1972.

Glidden sold his two Super Stock Mustangs in 1972 and purchased a Pinto Pro Stocker from Wayne Gapp and Jack Roush and made an immediate impact. Glidden, who left his job at Ed Martin Ford to concentrate on racing full time, runner-upped to Bill Jenkins at the season-ending Supernationals in his Pro Stock debut. The following year, Glidden broke through for his first NHRA national event victory, at the U.S. Nationals, where he paced the quickest-ever Pro Stock field with a 9.03 at a national record 152.54 mph and defeated fellow Ford racer Gapp in the final. It was a harbinger of things to come.

In 1974, in just his second full season in Pro Stock, Glidden won three major events, including the Springnationals and U.S. Nationals, and set both ends of the national record en route to his first Winston championship. Glidden's Pinto carried him to a come-from-behind victory over rivals Wally Booth and Gapp.

Glidden's late-season surge that year included a victory at his final Division 3 race in Bowling Green, Ky., where he set both ends of the national record (8.83, 154.90) to earn an extra 400 points (in those days, Pro racers earned points toward the Winston championship at a combination of national and divisional races). He ran even quicker at the season-ending Supernationals, where he reset his e.t. record (8.81) in qualifying and beat Gapp in the final.

Glidden won seven times in 1975, including at the Winternationals, Gatornationals, Fallnationals, and World Finals, to capture his second consecutive Winston title. He also qualified No. 1 five times, posted top speed eight times, and set low e.t. six times, and he did it with three different cars, including his old '74 Pinto, which he reacquired after a midseason slump 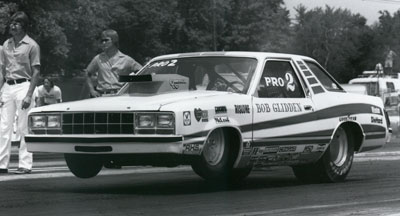 After a disappointing 1976 season, in which he finished a distant sixth behind Larry Lombardo, Glidden rebounded to finish second behind Don Nicholson in 1977 before reclaiming his number-one ranking in 1978. Glidden, who amassed a record 16,035 points and lowered the national record to 8.59, fielded two winning cars that year: The first was his tried-and-true Ford Pinto that carried him to victories at the season-opening Winternationals and Cajun Nationals, and the second was his famed Ford Fairmont, with which he won the Summernationals and finished the season undefeated in national event competition. When all was said and done, Glidden had tied Don Prudhomme for most national event wins in a season with seven, including five straight, and had broken the Pro Stock single-season record of six set by Jenkins in 1972.

In recalling his Summernationals triumph, which he attained by defeating the Lombardo-driven Jenkins Monza in the final (8.55 to 8.71), Glidden said, "That was by far the biggest spread that I ever had over the guys in any race that I've ever ran. We didn't clinch the points title mathematically until just before [Indianapolis], but mentally, we felt that we had won the title right there in Englishtown."

In the summer of 1978, Glidden embarked on one of the sport's legendary winning streaks that included nine straight national event victories and stretched a complete calendar year. He also qualified No. 1 at a record 23 consecutive races, including all 14 events in 1987. 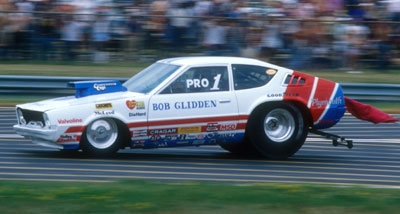 Glidden retired his undefeated Fairmont in favor of a Plymouth Arrow in 1979 and lost only three times all year. After finishing the 1978 season with seven straight victories, Glidden opened the 1979 season with a victory at the Winternationals and didn't lose a round until June, when a foul start in the second round of the Mile-High Nationals snapped his streak at 14 races and 50 rounds. That season, Glidden won seven national events, went undefeated in divisional competition, and earned the maximum number of points available at four national events by qualifying No. 1, setting low e.t. and top speed, and winning the race. He did the same thing at all four of his divisional races. 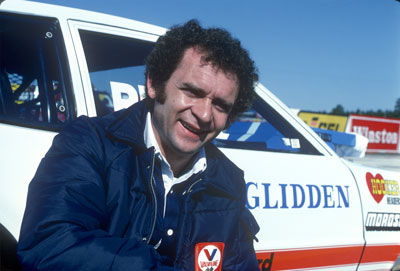 Unlike his 1979 championship season, Glidden won his third straight and fifth title in 1980 in dramatic fashion. Facing his first real challenge in the performance department in quite some time, in the form of the Lee Shepherd-driven Reher-Morrison Chevy Camaro, Glidden led the points chase only once all year: on the last day of the season. Glidden entered the season finale in Ontario, Calif., trailing Shepherd by two rounds and caught a huge break when Shepherd's transmission broke in the second round. Glidden went on to win the race, setting low e.t. and top speed in his final-round victory over Frank Iaconio.

After coming close in 1980, Shepherd succeeded in stripping Glidden of his title in 1981. Ironically, it was Glidden's incredible success that sparked the Reher-Morrison team. "We finally got tired of losing and of Glidden winning so easily," said Buddy Morrison. "We decided that we either had to make the same kind of commitment to racing that he did or get out. We didn't want to get out."

That commitment resulted in four consecutive Winston championships for the Reher-Morrison team (1981-1984), but the satisfaction of claiming their fourth title was tempered somewhat by the fact that they no longer had the quickest car in the country. Glidden's Ford Thunderbird, which he received in mid-1984, was the dominant car in the last half of the 1984 season and for all of 1985. In 1985, Glidden led the points chase from start to finish, winning five national events. 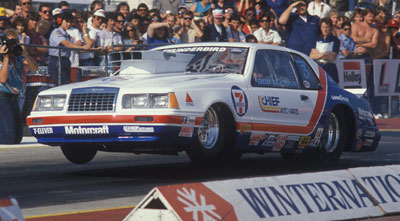 In 1986, in one of drag racing's great comeback stories, Glidden overcame a slow start and a horrific crash at the Southern Nationals in April to win his seventh Winston title. After early-round losses at the Winternationals and Gatornationals, Glidden was dealt a devastating blow at the Southern Nationals when a gust of wind caught his parachute and sent his Thunderbird into a tailspin following a semifinal victory over Butch Leal. After hitting the opposite guardrail, the car barrel-rolled six times and was destroyed. Miraculously, Glidden was not hurt, and he returned to competition a month later at the Cajun Nationals with a new Thunderbird, but his first win would not come until the Mile-High Nationals in July. That victory was the first of three straight for Glidden, who won six of the final seven races that season.

Glidden's remarkable career reached new heights in 1987, when he won eight races, including his milestone 60th victory. He won the last five in succession and reached the final 10 times. He also qualified No. 1 at all 14 races, extending his streak to 22 over two years (his streak was snapped at 23 at the 1988 Gatornationals), and won a record 42 rounds of competition.

Glidden's 1988 Winston championship, his ninth, followed a similar script. After struggling early, he won five of the last seven races and runner-upped at another to capture his fourth straight title. Glidden retired his venerable Thunderbird, which he drove to 19 national event victories, in favor of a sleeker Ford Probe and set the national e.t. record at 7.277, the quickest Pro Stock run in NHRA history, at the Supernationals, which he won to clinch the championship in the car's debut. He put his Probe in the winner's circle one more time, at the Fallnationals, for his 67th career victory.

The 1989 season was Glidden's most dominant campaign, in which he won nine times en route to his 10th and final Winston title. Unlike his three previous seasons, Glidden came out of the blocks flying, winning five of the first seven races and seven of the first 11, and he never looked back. His victory at the season-ending Winston Finals gave him 76 career wins, 49 in the 1980s alone.

Glidden, who had carried the Ford banner practically by himself throughout his career, retired in February 1997 to concentrate on engine development for some of Ford's NASCAR Winston Cup teams. That, and a sponsorship package that he felt was unsatisfactory, convinced him to pull the plug on his drag racing operation just two races into the 1997 season.

Glidden came out of retirement to drive occasionally through the 2010 season, and although never won again, he left a championship legacy.