Friday at the movies

Last week’s bits and pieces column elicited a lot of positive feedback, but none more so than the nostalgic video from the 1973 Popular Hot Rodding Championships. I thought that it was a pretty well-known video — if for nothing more than Paul Longenecker’s oh-my-gawd wheelstand — but apparently not.

I’d imagine a lot of you are like me when you find a cool old video on YouTube, where each video comes with its own supply of endless related videos, and you end up following a trail of breadcrumbs until an hour later you realize that you’ve been way-laid in a haze of nostalgic nitro fumes. Like the old jingle for Lay’s potato chips, no one can consume just one.

What I find really cool about some of these old fan-shot videos is the random nature of their splicing. A burnout here, a launch there, a cool car in the pits, some fellow fans, etc. They're like little vignettes into your memory, a kaleidoscope of sometimes blurry and mixed-up visions of your youth. The lighting’s not always great, nor is the composition, quality, or camera work, but that makes them a little extra special. If you remember those days before video cameras, you bought a roll or two of 8mm film, which, as I remember, was good for about three minutes. You’d shoot it, drop it off at the drugstore for processing, and come back a week later to pick it up, already spooled on a mini reel that you then threaded onto your home projector (the one where you hoped you didn’t accidentally bump the unit when the bulb was hot, lest you break the fragile bulb), set up the folding movie screen (or maybe just projected it onto a white wall), and got to review the work.

Anyway, all of this reminiscing got me headed back to YouTube to see what else I (and you) may have been missing. Here’s five similar clips for your viewing enjoyment, along with my Director’s Cut commentary. Be sure to run 'em full screen!

Irwindale Drag Strip 1975 (running time: 3:27): Cameraman Doug Hayes did a good job of moving around the fabled SoCal facility, which is good for two things: multiple angles and to show you what the place was really like: big on character, low on flashiness, but beloved by all. Great old West Coast cars like the California Charger Mustang (gotta love those big ol’ Mach Is), the Pisano & Matsubara Vega, Mickey Thompson’s U.S. Marines Grand Am, Mike Halloran’s Charger, Lil John Lombardo, Tom McEwen, Jim Dunn, my old Insider buddies Simon Menzies and Jeff Courtie, and more. If only it had sound …

1970 Nationals (running time: 8:21): Not the greatest camera work, but you can’t beat it for the sheer number and variety of cars shown competing at that event. Lots of recognizable Funny Cars (Don Schumacher, Malcolm Durham, Tom McEwen, Ramchargers, Hawaiian, etc.) and some nice panoramic footage of the facility. You’ll see all manner of Sportsman cars, from doorslammers to Comp dragsters, and even fuel bikes burning out against the back bumper of the tow vehicle (remember that?). Alas, no footage of the Don Prudhomme-Jim Nicoll Top Fuel final. The oddest part of this video (besides its official name: Roland Leong "Hawaiin" 1970 Dodge Charger AA/Funny Car NHRA 1970 Nationals Winner) is the random soundtrack of engine noises and announcers — including the late Richard Schroeder telling a wild tale about a wet T-shirt contest at the famed Moroso-sponsored pit parties of yore — that clearly are not from this event. Still worth the watch.

1972 NHRA Supernationals (running time: 19:58): Great stuff from Ontario Motor Speedway and from one of NHRA’s most historic events and a real work of love by Doug Gordon, who shot, edited, and subtitled it himself using the old 8mm literal cut-and-paste technique. All kinds of cool shots of cars in the pits, including Keeling & Clayton’s California Charger, Don Prudhomme’s wicked Snake III black ’Cuda, the Lisa & Rossi “flying doorstop” Top Fueler, Larry Bowers’ canopied dragster, the Barry Setzer Vega, and, of course, Jim Dunn’s rear-engine Barracuda, plus personalities like Jerry “the King” Ruth, Tom “the Mongoose” McEwen, and Raymond Godman, and pit action, including parts and pieces and Top Fuel cars being warmed up in the pits without jackstands. He added subtitles (“Saturday: Qualifying is frantic!” along with the bump spots or “Sunday, First Round Highlights” or “Clayton Harris defeats Rick Ramsey”) to help you know what you’re about to see.

The on-track qualifying footage is nice, shot from either a grandstand spot on the starting line or downtrack, but Sunday is low-angle, ground-level stuff somewhat obscured by photographers and hangers on. Check out those Top Fuelers with their small wings sticking up straight over the rear tires, a far cry from today’s laid-back monsters. You’ll see Mike Snively’s historic 5.97 and Doug Moody’s even-quicker 5.91, plus Dunn’s unprecedented rear-engine Funny Car win. I’ve never seen any footage of these runs, so it’s very cool. Alas, no sound, but still the coolest 20 minutes I’ve spent in a long time.

1973 National Challenge (running time: 19:26): Another Doug Gordon production (this guy is quickly becoming my hero) showcasing the action from Tulsa. Of course, event protagonist Don Garlits is there (along with sidekick T.C. Lemmons) and a whole host of great ’70s floppers, including Don Schumacher’s slick Wonder Wagon, Dunn’s blue rear-engine car, “Jungle Jim” Liberman’s Vega (and, of course, “Jungle Pam”), “Superman” Jim Nicoll, Mickey Thompson’s original Grand Am, Pete’s Lil Demon, and many more. The starting-line footage is great, but once fans start standing up, we lose any downtrack action. Again, no sound, but, still, half-track burnouts (Schumacher … wow) and dry hops aplenty from the Funny Cars and Top Fuelers with front wheel pants — that’s my kind of scene.

At around the 16:30 mark, you’ll witness the craziness of the Funny Car final. I had only ever read about this and seen photos in Drag Racing USA, so to see it in video was astounding. Nicoll starts leaking while backing up from his burnout to face “the Snake” in the final. His crew is waving for him to shut it off, the body is raised, when around the corner, with the pipes lit, comes Schumacher’s Wonder Wagon, getting in on the break rule and apparently just waiting in the wings for that chance. Nicoll wants no part of this and edges his car forward to block Shoe, who dry hops around him and to the line. Only slightly less wild is the Top Fuel final, where Marvin Schwartz loses fire on the burnout against “Big Daddy.” His push truck roars onto the track to try to push-start him, but Schwartz’s engine unzips in the process, and Garlits solos for the win. Crazy!

Man, those are some great and timeless videos. Some may wonder why we care, but Eagles co-founder Don Henley, for my money one of the great songwriters of our time (listen sometime to “The Last Resort,” his masterpiece about “how the west was lost”), said something recently that really resonated with me. 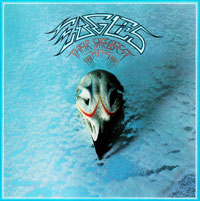 The Eagles’ Their Greatest Hits, the best-selling album of the 20th century, is among the latest batch of sound recordings headed for the Library of Congress’ National Recording Registry. The library is tasked each year with identifying 25 historical sound recordings — music, spoken word, TV, or radio broadcasts — that are deemed “culturally, historically, or aesthetically significant” for preservation in the Library of Congress.

“Some anthropologists say that humankind has about 1,000 more years of existence on this planet,” Henley told the Los Angeles Times. “So, one might logically ask, ‘What’s the point of archiving these recordings?’ We do it for the same reason ancient cave dwellers made drawings on the walls of their caves — to say, ‘We were here, and this is what our life was like.’ ”