I had a lot of fun last week reliving the story of the tumultuous 1992 season-long battle between John Force and Cruz Pedregon for Funny Car supremacy –- capped by their crazy Dallas final round -- and judging by the volume of email, so did a lot of you. Thanks first to Force and The Cruzer for sharing their memories. Both were kind of stunned when I told them that was 25 years ago as for both of them it’s still pretty fresh in their minds.

It’s very cool to me that they’re still racing in the class, with the kind of longevity that we don’t really see anymore. I looked at the entry list from that ’92 Dallas race and of the 23 Funny Car drivers who took part, only five –- Force, Pedregon, Del Worsham, Gary Densham, and Jack Wyatt -– are still competing, though Paul Smith is still involved with son Mike’s career and Mark Oswald is, of course, one of the crew chiefs for Antron Brown.

A trio of them –- Chuck Etchells, Al Hofmann, and Gordon Mineo –- are no longer with us, but we still see Tom Hoover hanging out every time we go to Brainerd, and Whit Bazemore, Dale Pulde, and Jim Epler are still semi-public figures, but whatever became of guys like “Fast Freddie” Neely, Norm Wilding, Jerry Caminito, Gary Cellone, Rick Sherrill, and my old buddy Brent Fanning?

(The “survivors” from Top Fuel field at that ’92 Dallas race are really slim: Of the 19 drivers entered, only Tommy Johnson Jr. and Jim Head are still active, and T.J. is the only one still driving, albeit in Funny Car now.) 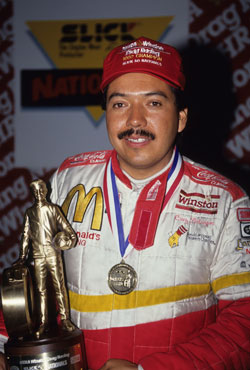 Other facets of that wild and wooly Dallas Funny Car final between Force and Pedregon keep popping up. In his On The Run column published right after the event in National Dragster, Pedregon had extremely complimentary things to say about Force (“The way John Force drove his Oldsmobile displayed the mark of a true champion. He has my respect. When you go up against Force, you go against the best. And he brings out the best in me.”), an admiration that would be tested several times over the next two decades.

In the interview that Pedregon gave me last week, he said he never saw Force hit the guardwall but did remember seeing the body off the chassis (the crew had apparently removed it to inspect for damage to the steering before towing back to the pits). At the time, he mistook it for the body of Force’s Alcohol Funny Car Castrol teammate, Pat Austin, who also was competing at the event.

“I remember seeing a body next to the guardwall and thinking, ‘What is Pat Austin’s body doing there? Is it for sale or something?’ It was all lost on me in the elation of winning until someone told me later what happened,” he explained. 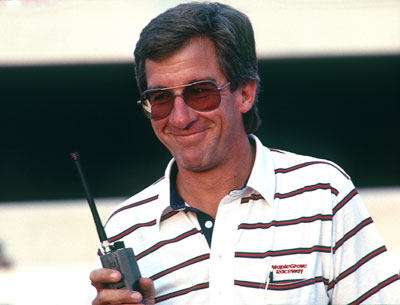 Current Don Schumacher Racing vice president Mike Lewis, who was part of NHRA's announcing crew and doing top-end interviews at that event, remembers well those crazy moments after the final.

“I arrived in time to catch Force removing his helmet,” he recalled. “He grabbed the mic and wanted to reassure the crowd that he was OK and then quickly turned to Steve Evans, who captured the moment for TV. I was walking away to prepare for the Top Fuel final when Force found me and yelled, ‘Lewis, I need to tell everybody I’m OK,’ as if we hadn’t already done a trackside interview. He was serious and yelled again, frantic to reassure the fans that he was OK. He had a puzzled look when I reminded him that he had already done a trackside interview and finally backed down as the Top Fuel cars did their burnouts. Good thing he was done for the day. Without today’s concussion protocols he would have argued to race again.”

(Interestingly enough, as Lewis also pointed out, those protocols were put to good use this past weekend in Dallas after Steve Torrence’s wild second-round wreck and immediate return to action for the semifinals in a backup car. The Texan can sure take a beating; tough guy right there, folks.)

I went back and reviewed other info on the wreck, including follow-ups in ND in the issues following the Dallas event, and Force insisted that he’d never been knocked out in the initial hit, had spent the rest of the evening (until 2 a.m.!) in the Baylor emergency room, and that his only injury was to his tongue, which he had bitten in the crash.

When I mentioned that to Pedregon last week, he was impressed. “If he didn’t get knocked out, he can take a punch, because that’s like taking a punch from a pro boxer,” he opined. “Remember this was all before we had all of the extra safety padding in the cockpit like we do today. I hit the wall once and I woke up in an ambulance.” 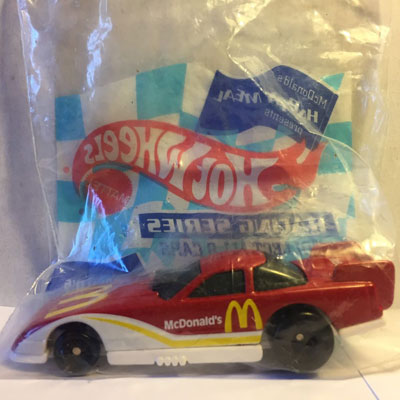 Force being a bit loopy after this crash is understandable (who could forget Kenny Bernstein’s slurring “Nastin Cup” interview after his bell-ringing final-round crash at the 1993 Winternationals?) but until Insider regular Al Kean reminded me of it, I had completely forgotten about Force’s Western Swing meltdown earlier in the year in which he stomped on a McDonald’s Funny Car Happy Meal toy Brittany had gotten on the way to Seattle. Force had mentioned it to me in passing last week (“I was just being stupid,” he admitted) as part of his normal stream-of-conscious semi-answers to my question, but Kean was nice enough to clip the article from ND to remind me.

The full story actually came to public light a full year later, after Force had won the Seattle event in 1993 and had a huge points lead. On the victory stage, he flashed back to the previous year, where Pedregon’s relentless pursuit of him and all of the attention that the rookie driver was getting with his success and the new McDonald’s sponsorship had driven him quite mental.

“This time last year I went to sleep dreaming about Cruz and the McDonald’s car,” he confessed to the crowd. “I decided to drive my wife and three girls up from [Sonoma] to Seattle last year, and all the way up, it was ‘Cruz Pedregon this, Cruz Pedregon that.’ I couldn’t stop talking about him.

“We’re up in Grants Pass, Ore., when the kids get hungry, and so I pull over and, I’ll admit it, to a McDonald’s. We order and one of the guys behind the counter asks Brittany, ‘Do you want a Barbie doll or a car with your Happy Meal?’ She takes the car, which I didn’t see at the time. 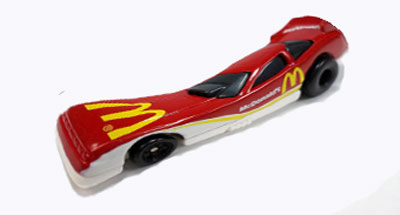 “We’re back in the car and goin’ down the road, and I ask her what she got. She reaches into her little bag and pulls out the McDonald’s Funny Car. I couldn’t believe it. I grabbed that toy, stopped the car, and jumped out onto the interstate. I put that car on the ground and stomped all over it. I told her we’d pull into town and I’d get her something new.

“I get back in and my wife’s staring at me. She said, ‘You really are going crazy.’

“We aren’t the Winston champions. We still have a lot of work to do, but I don’t think the boss is as crazy as he was last year.”

One more quick thing before I go. The long-running and slowly progressing status of the Dragster Insider archive inched another step towards completion with the addition of all 2010 articles.

If you’ve been around this joint long enough, you’ll remember that year for some of the ludicrously long story threads that just would not die, including 13 separate and almost continuous columns on wedge Top Fuelers and their spinoffs and a dozen more later that year on ramp trucks, Man, those were some good times. You can enjoy the madness again by clicking on the archive link below and then clicking on the 2010 link at the top of the archive page.

There are already more than 600 articles archived there, with another 100 or so still to go, all from 2011. After that, the complete library of Dragster Insider archives (give or take a few throwaway columns that I decided not to foist on you again) will be available.

The work has absorbed my life for the last decade and I’m extremely proud (and quite amazed) at the depth and breadth of the subject material available, and thrilled by the community we have created here. Thanks again, as always, for your contributions, support, emails, and handshakes.