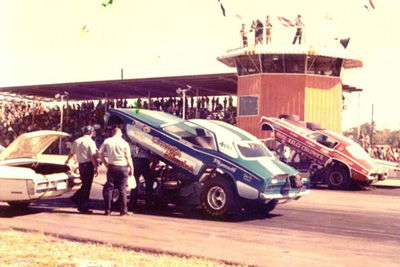 The holidays are all about family and gathering everyone together to enjoy one another’s company, to share great memories, and laugh a lot, and that was spirit of the celebration that took place down in Louisiana Dec. 1-2 at the Southland Dragway reunion, which celebrated the 48th anniversary famed racetrack, which closed in 1979 after just 10 short years of operation.

You may remember (and, thanks to the refurbished and nearly complete Dragster Insider archives, can revisit) the “Ghost Tracks" article on did on the facility way back in 2008. Southland, built by the Baker and Grezzafi families, was loosely modeled on SoCal’s famous Orange County Int’l Raceway, right down to the octagonal (although less-glassy) starting-line tower, had covered grandstands to battle the Louisiana heat, and was the hometrack from the famed Candies & Hughes team.

My “Cajun buddy,” Gary LeBoeuf sent me a long a report on the festivities.

“Although in existence for only 10 years from 1969-1979, it was a remarkable hot bed for drag racing in the area,” he wrote. “Notable pro racers from the area were Candies & Hughes, Robert Anderson, Sydney Foster and the gang from Shreve Automotive, among many others. It also had the honor of having some of NHRA's greatest that worked there also, Dave McClelland was one of its first track managers, along with Cary Menard and Norman ‘Moose’ Pearah and finally finished being run by the famed South Louisiana racing family of Joe Teuton.

“Steve Robichaux, a local businessman and fan of Southland, got the idea of hosting a reunion for the racers and fans of the track. He began by forming a committee to look into the feasibility of doing such an event. The word soon spread, and the meetings began to attract racers and fans alike. It was decided that the event would consist of a meet and greet on Friday night and a car show on Saturday with as many original cars as could be found that raced at Southland and also local area race cars and street rods. It soon became apparent to the committee that there was a lot of interest in the event, but it was really unknown of exactly who could we attract to attend. The night of the meet and greet we had approximately 90 pre-paid tickets sold. Soon there was a line winding through the halls of the Marriott hotel and in a short period of time we had well over 400 in attendance.”

According to LeBoeuf, they had an amazing turnout of racers, highlighted by Leonard Hughes himself and his former driver, Mark Oswald. As you probably remember, Oswald won events driving for the Candies & Hughes team in both Top Fuel and Funny Car (and, of course, the Funny Car championship in 1984) and even though he original raced out of Ohio with the Thomas-Oswald-Kattelman dragster, he’s obviously still got some love and respect for the bayou bunch. Oswald, who attended a number of the planning meetings, brought along his current driver, three-time NHRA Top Fuel champ Antron Brown, and Louisiana’s first lady of drag racing, Angelle Sampey – another three-time world champ and longtime friend of AB – also juiced up the star power, along with Preston Davis of Tennessee Bo Weevil fame and Freight Train “engineer” John Peters (Freight Train). There was also plenty of home-grown talent on hand with former NHRA world champ Cajuns like Craig Bourgeois (Comp, 2106), Richie Rosen (Comp, 1975), and Sammy Pizzolato (Stock, 1988) and famed chassis builders Boogie Scott and Chuck Hasse. 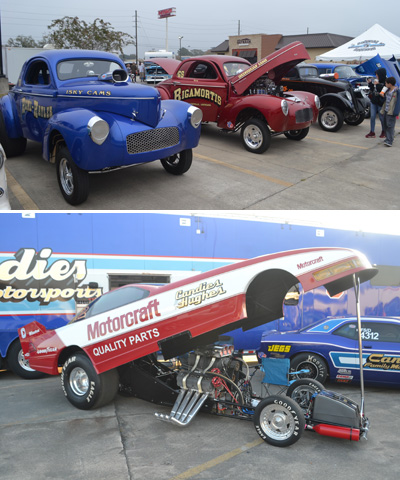 “The car show to honor the track and it racers was being held in the Hooters and Walmart parking lots in Houma the next day,” LeBoeuf added. “From prior meetings we had heard from a number of local racers who were bringing out old racecars that were restored or were still in original condition from when the racetrack was open. We were again overwhelmed with the response to the car show, we had a little over 100 pre-registered cars but on the day of the show hundreds showed up. Included where vintage Top Fuel cars and race cars from the 1960s through current day.

"We had a number of scheduled events during the car show including autograph sessions and planned Cacklefests at 1 p.m. and again at 6 p.m. to end the show. Some of the racers that gathered at the car show and the meet and greet had not seen each other in years.

"A great time was had at the meet and greet with many stories being told and old friendships being renewed. It was great hearing their stories and watching quite a few of them overcome with emotions. We are losing some of these greats of racing very quickly and events like this bring the old, current and future racers together and prove once again what a great family sport this is. We cannot wait to do this again.”

You can read more and see more photos and videos at the event’s Facebook page. Thanks for sharing, Gary. 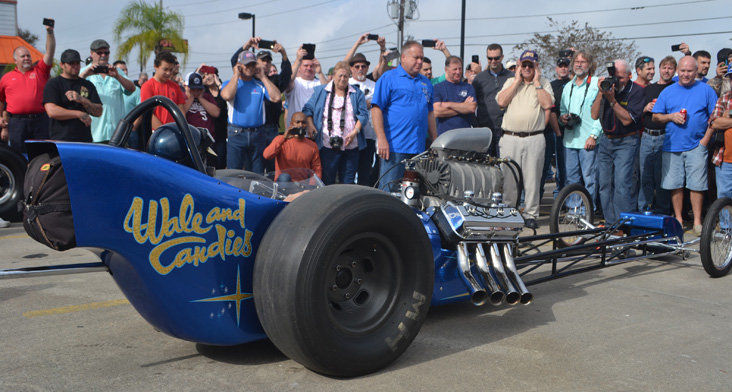 Speaking of old tracks, you can revisit some of my Ghost Tracks columns at the following links:

That's it for the week. I'll be back next Friday for what is probably the final 2017 column. I'll have an update on the Top 50 Racers list remake idea I floated last week (spoiler: not well received), and other stuff before we head into the holiday break.