The Art of Matt Levonas

Northwest Division Director Matt Levonas' passion for racing goes far beyond his divisional duties, as he's also a talented artist whose work spans the history of the sport. Here's a look at some of his nostalgic pieces.
17 Feb 2017
Phil Burgess, NHRA National Dragster Editor
DRAGSTER Insider

When I was five years old, I made a drawing in my first grade class of George Washington astride a horse that my teacher raved about. Unfortunately for me, that’s probably still the level of my drawing skills. Sure, I can paint a picture in words, but don’t ask me to put it to canvas.

Fortunately for me, I get to enjoy the artwork of others, and in my time with NHRA have become friends with and marveled at the artistic handiwork of geniuses like Kenny Youngblood, James Ibusuki, David Peters, Greg Ozubko, and our very own John Jodauga. Most of these guys are professionally taught and focused, and can devote the time needed to create their masterpieces. 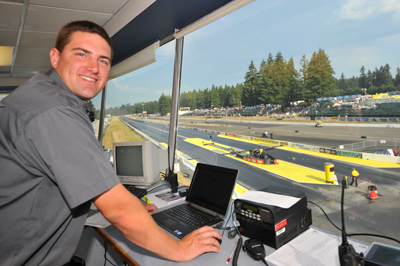 Then there’s Matt Levonas. You may know him as the hard-working NHRA Northwest Division Director, but there’s an artistic side to him that provides a release from the stressful job of running the division. He’s been sharing his work with me for years, and a lot of it is nostalgia-based, so I thought I’d share it with you guys.

“I’ve always had an interest in the history of the sport, and it’s really a romantic history,” he said. “The older cars were very visually interesting.

“I’ve always been artistic, even as a kid, when I would express my love of the subject through drawing,” said Levonas. “If I’d watch a movie and get fired up by it, I’d draw it, and, obviously, when I started going to the drag races, I’d draw the cars that I had seen. It was just how I expressed myself. Today, it’s a real release for me from the pressures of the job.”

He uses his collection of old drag racing magazines as source material to make not just the cars, but also the backgrounds as authentic as possible. The subjects and their composition come from those images as well as his imagination and sometimes from famous places. Colored pencil is his favorite medium.

Here’s a look at just some of the wonderful work he’s done, with comments from the artist, including the title and medium. To see more, visit www.LevonasArt.com. 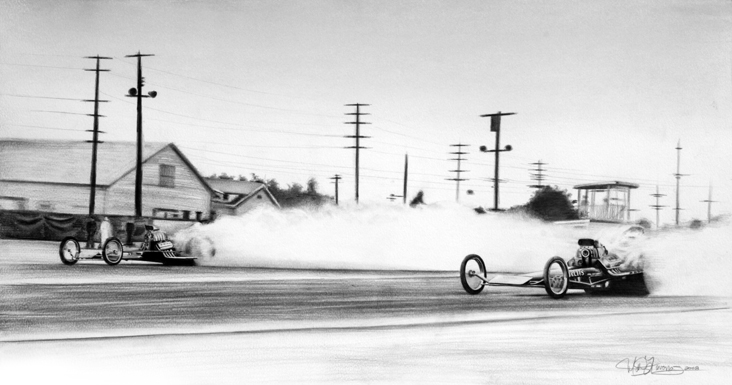 NUMBER 1 (pencil and charcoal): "I saw this picture on the front Page of an old Drag News issue from when the Frantic 4 beat Garlits in a best-of-three match race to win the No. 1 spot on the Drag News Top 10 list. It’s kind of funny how the sport has come full circle with the recent rise in Call-Outs and Lists in the drag racing scene." 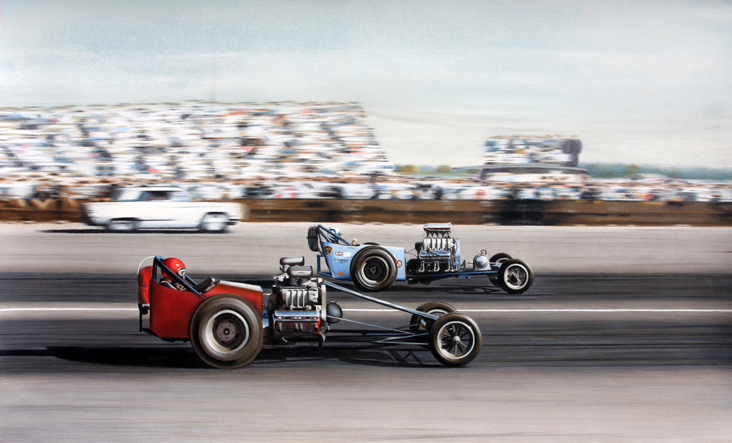 OUTSTANDING PERFORMANCE (pencil and pastel): "For the 3rd annual March Meet, Gene Adams and Tom McEwen decided to tip the can to their "usually" gas dragster and add nitro. McEwen and the "Shark Car" were one of the fastest cars of the weekend. In maybe the best race of the event McEwen came up against Garlits' SRIII car, the car to beat, being driven by Connie Swingle. Adams added 25 percent to the tank and fired up. In a great race McEwen beat SRIII with an 8.24 at 181 mph. They lost the next round, the semi-final, with a hurt motor, but they did receive the "outstanding performance of the race" award for beating Garlits' SRIII." 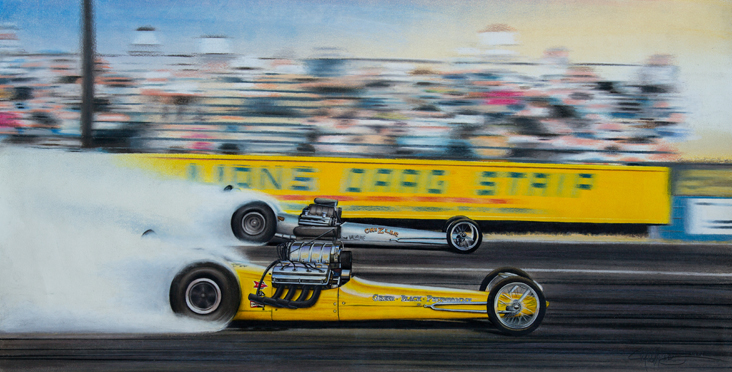 PRUDHOMME AND THE GREEK (pencil and marker): "The Greer-Black-Prudhomme car has always been one of my favorites. The car was gorgeous with sleek bodywork and gorgeous yellow paint. With the legendary Keith Black tuning and Prudhomme driving the car, amassed quite a win record. I did this depicting the car a match race at Lions Dragstrip the team had with Chris “The Greek” Karamesines, who was about as hot as Prudhomme in ’64." 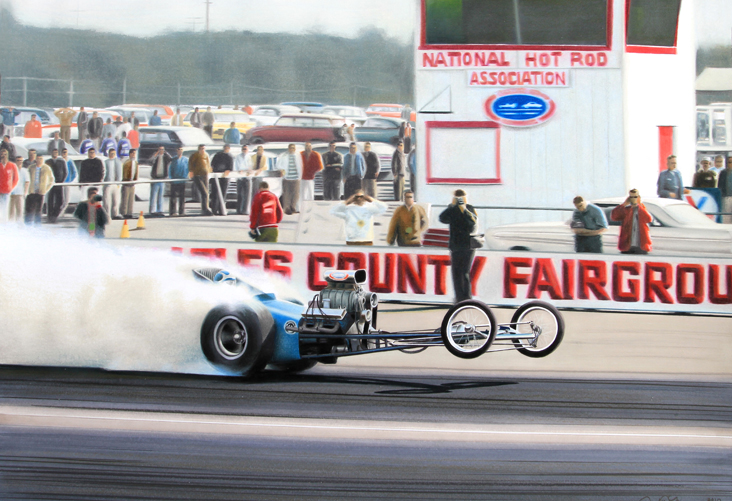 SAFFORD-GAIDE-RATICAN, POMONA '64 (pencil): "Also one of my favorite pieces, I can almost feel the event as the car roars past the old tower with the staging lanes and pits in the background. While not the popular 392 Hemi combination, Kenny Safford more than held his own with the Olds powerplant." 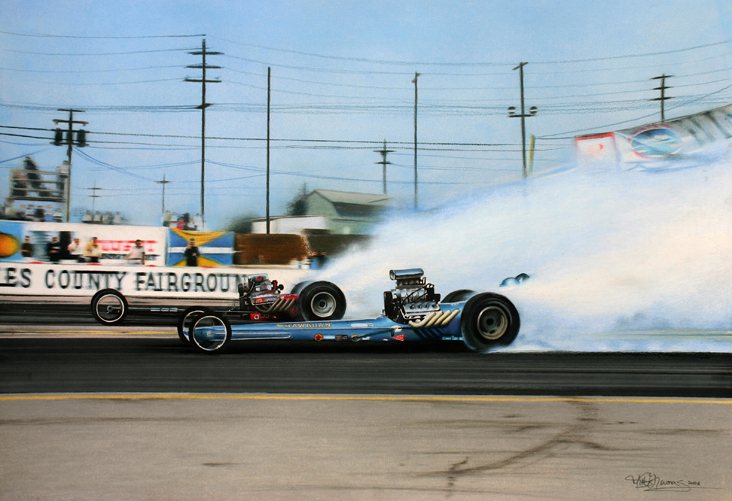 A HAWAIIAN WINTER (pencil): "I just love everything about this one. Two Fuelers, Pomona, and the Winternationals banner floating above the starting line. The Hawaiian was such a beautiful (and hard to beat) car as well." 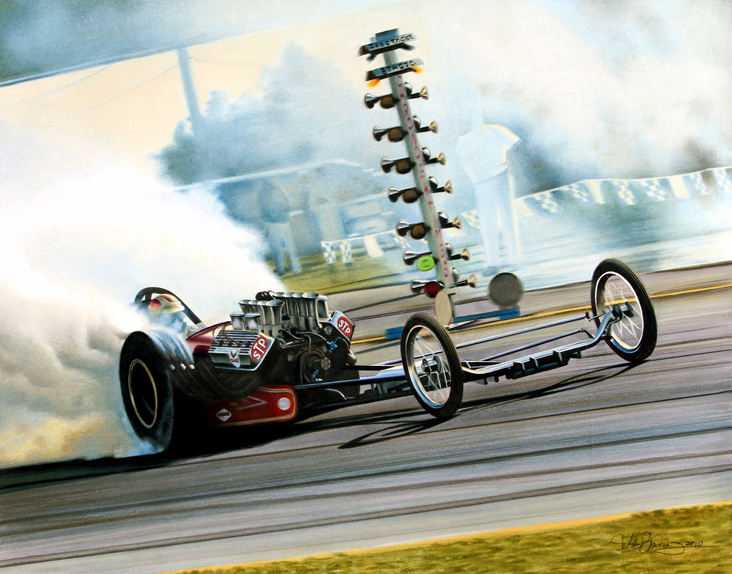 JR. FUELER (pencil): "This was done off a picture I came across in an old 1960s drag calendar. To me the warm tones with afternoon light in Indy combined with the cool tones in the shade and the attitude of the old Jr Fueler just give evoke a real feel for the time and the event. It’s always special to be running late in the day on Labor Day in Indy. This is probably one of my favorite artworks I’ve done to date." 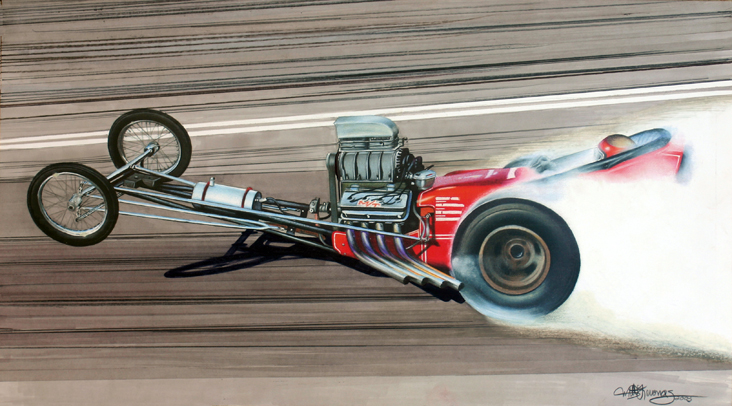 FRANTIC 4 (pencil and marker): "Working off an old photo, I loved the simplicity of the composition. It really showed off the unique combination that Weekly-Fox-Holding-Rivero ran: a 354 Hemi, “weedburner” headers in a ‘62 Pepmuller chassis with the bodywork that wrapped around the entire cage/shoulder hoop area. The team ran predominately up and down the west coast from Arlington, Wash., down to Pomona. The non-traditional angle just shows off the car so nicely." 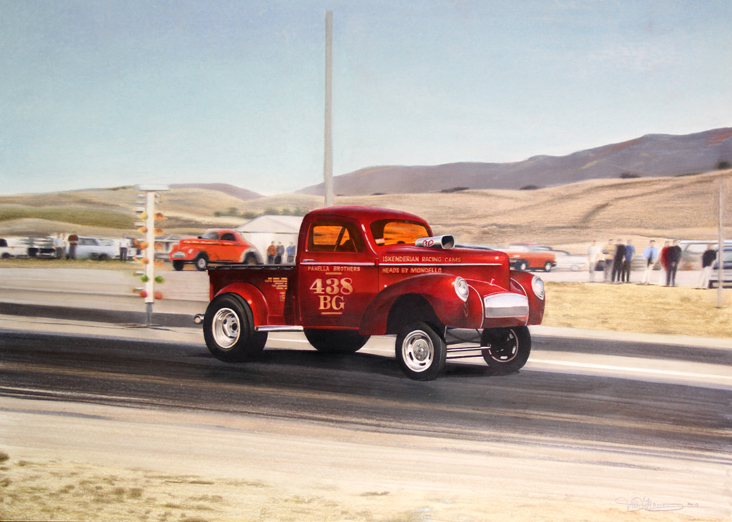 TRUCKIN’ (pencil): "From the beginning Panellas have always been known for having some of the best looking cars (and trucks) at the track. Bob Panella Sr.’s Willys was no exception. I completed this work as a commissioned work as depiction the old gasser back at Half Moon Bay." 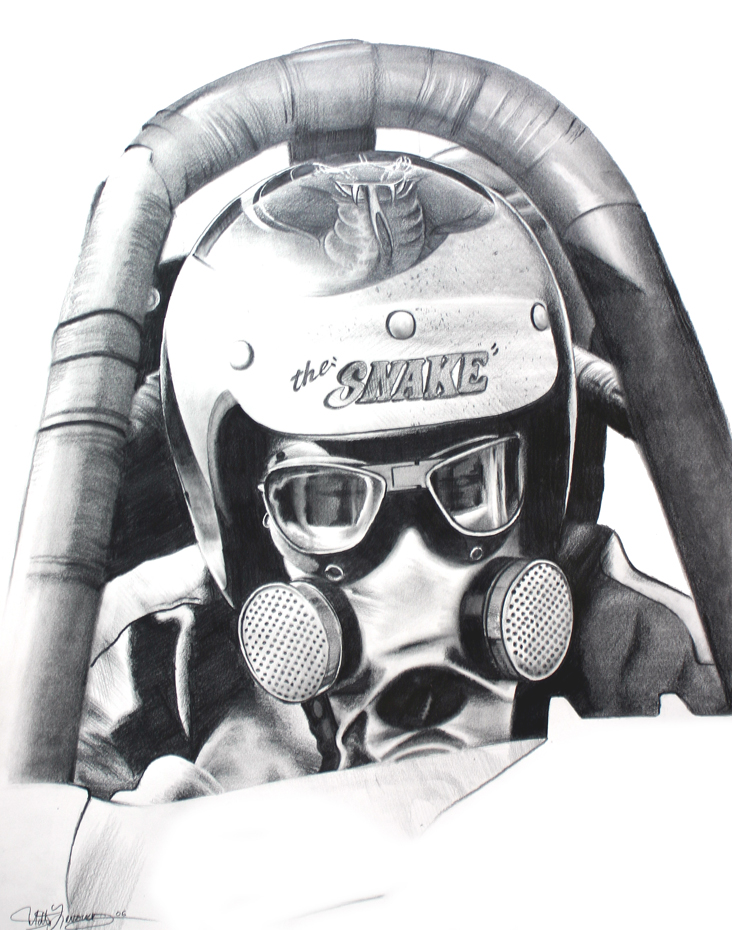 GETTING READY TO STRIKE (pencil): "Black and white pencil sketches while simple are always fun. You can’t deny how cool the old masks and goggles look either."

OK, that's it for this week. He's got a bunch of cool 1970s Funny Car art that I'll share with you next week. Thanks again to Matt for not only creating these beauties but allowing me to share them with you.