As hard as it may be to believe – and the fact might change this weekend at Indy – but Ed “the Ace” McCulloch is still the king when it comes to Funny Car victories at the Chevrolet Performance U.S. Nationals, even 27 years after his fifth and final win there.
29 Aug 2017
Phil Burgess, NHRA National Dragster Editor
DRAGSTER Insider

As hard as it may be to believe – and the fact might change this weekend at Indy – but Ed “the Ace” McCulloch is still the king when it comes to Funny Car victories at the Chevrolet Performance U.S. Nationals. 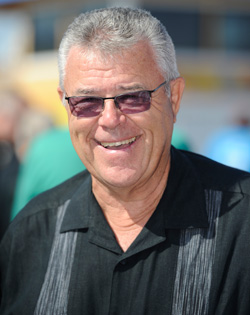 Yes, that’s right. Even though he hasn’t competed in a Funny Car at “the Big Go” since 1991 – 26 years ago -- McCulloch’s five Funny Car wins at Indy are one more than the total owned by the class’ all-time winningest driver, John Force, or even that of four-time world champ Don Prudhomme (also four wins). In fact, McCulloch’s last Indy Funny Car win, in 1990, came a full three years before Force’s first.

Although Prudhomme has more total Indy wins than McCulloch – seven, counting his first three, which came in Top Fuel – McCulloch also has a fuel dragster win in Indy (1992), putting him alongside “the Snake” on the short list of four drivers to have won the U.S. Nationals in both nitro classes (along with Kenny Bernstein and Jim Head).

Before hopping the silver bird to Indy Thursday, I spent an enjoyable 90 minutes on the phone with “the Ace” reminiscing about his Indy successes and other great moments from his career, enough for more than one column. Today, with Indy now revved up, we’ll talk about his “Big Go” successes and then next week I’ll share some wonderful observations and memories from the remainder of our conversation. It’s great, great stuff. Thanks, Ace. 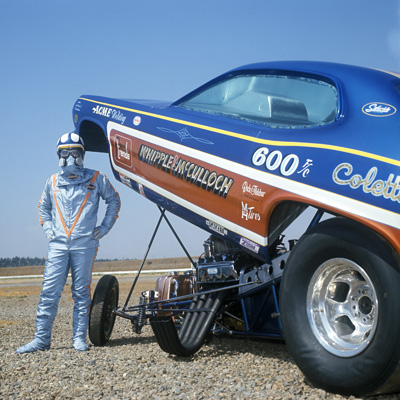 McCulloch’s first Indy win, in 1971 with partner Art Whipple, came as the supreme payback for the previous year’s tragedy, which ended before it ever began when their beautiful national-record-setting Duster –- one of the first (if not the first) with full side windows and an escape hatch –- burned to the ground inside the trailer on the way to Indy.

“I was actually on the way to Seattle to do a display for Steve Woomer [Competition Specialties] before heading to Indy,” McCulloch recalled. “I was driving by myself when I saw smoke coming from out of the trailer. It started with an electrical short and caught the carpeting on fire, then got into the fuel jugs. When I pulled over it wasn’t much of a fire, and I tried to get the car unloaded, but we had packed cases of oil and stuff under the car, and by the time I got that out and the ratchet straps untied, fire was 10 feet out the door. I crawled up on the bank and watched it burn to the ground.” 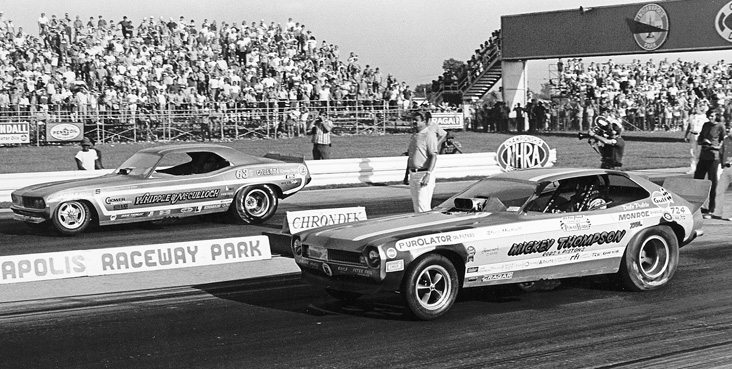 The team rebuilt, fielding a new Woody Gilmore-built Barracuda and made it to Indy in 1971. McCulloch qualified his Barracuda No. 2 behind Henry Harrison and defeated Sammy Miller, Jim Dunn, Connie Kalitta, and, in the final, Dale Pulde, for his first NHRA win. 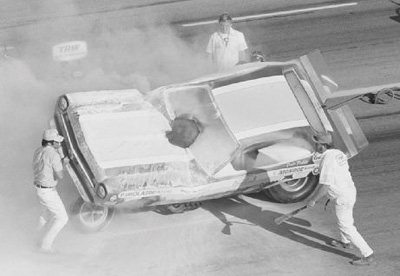 Pulde, at the wheel of Mickey Thompson’s lightweight (1,700 pounds) titanium-infused Pinto, lost twice in that final, riding out a huge top-end conflagration.

“We had never been back east touring, so we were the new guys on the block,” he remembers. “To win that race was just amazing, then I looked back up the track and saw his car sitting in the middle of track all up in smoke. Still, it was a huge honor to win the race, especially for our first win. I felt like I was set for life.”

McCulloch gained the backing of plastic-model maker Revell between seasons and started on his 1972 hotter than Pulde, claiming wins at the season’s first three races (Pomona, Gainesville, and Columbus) behind the wheel of his Revell-sponsored Revellution Dodge Demon, and also won the fabled March Meet in his Indy winner, which he had sold to Jim Murphy. Don Schumacher ended McCulloch’s national-event reign of terror at 15 straight rounds when he defeated him in the final round of the Summernationals, but “the Ace” –- who had amicably parted company with Whipple after Pomona -- bounced back to win Indy for the second straight year. “The Ace” again qualified No. 2 (his 6.47 just a tick behind Sush Matsubara’s 6.46 in Joe Pisano’s Vega) then beat Larry Fullerton, Al Hanna, Danny Ongais, and, in the final, relative newcomer Gordie Bonin to claim the title.

You would think that with four wins and a runner-up in eight events that McCulloch would have been that year’s world champion, but back then the title was still decided on the outcome of one race, the World Finals, where McCulloch lost in the quarterfinals to No. 1 qualifier Butch Maas and Fullerton took the overall crown.

Incredibly, McCulloch made it back to the Indy final again the following year, but lost to Prudhomme, who earned his first U.S. Nationals Funny Car crown. Indy ’73 was Prudhomme’s from start to finish: He was the low qualifier with a 6.35 (which became a new National Record), and also had Low E.T. honors with a first-round 6.27 and had low e.t. of three of Monday’s four eliminations rounds. McCulloch had qualified eight (6.42). McCulloch stepped up to a pair of 6.40s to beat Billy Meyer and Bobby Rowe, then ran 6.48 to beat Matsubara in the semi’s to earn final-round lane choice over “the Snake,” who managed just a 6.52 in beating Leroy Goldstein. Prudhomme recovered his mojo for the final, wheeling his yellow Barracuda to 6.38 to beat “the Ace’s” 6.44.

“The toughest loss I ever had,” McCulloch admits. “It went out there, picked the front end up and was driving to the centerline. I pedaled it to set the front end down and he poked a fender out on me and beat me. I still think about that one a lot; it will probably bother me forever.” 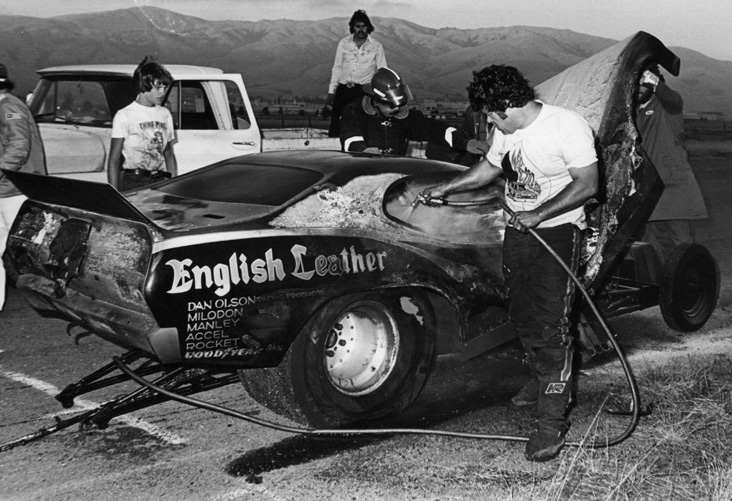 It would be seven long years before McCulloch reached the Indy final again. They were not particularly kind years to “the Ace” as he reached just five final rounds and lost them all (and the car in the above 1977 fire at Fremont Raceway). By the end of a half-hearted ’79 season, a weary McCulloch had sold his own operation. He did not stay idle long as Ed Pink lured him into his Super Shops Arrow previously driven by Dave Hough and Pat Foster. 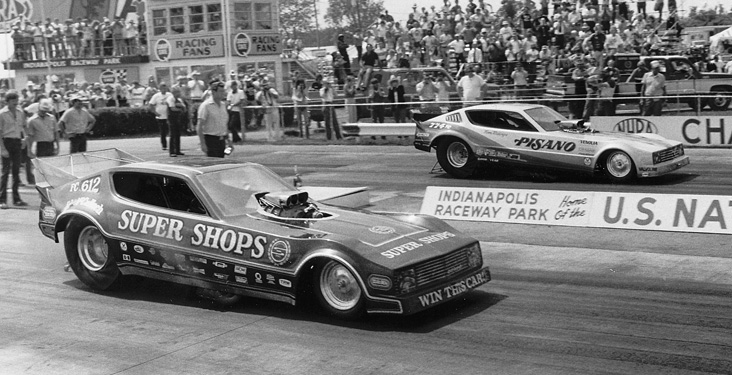 The car was not especially quick at Indy in 1980 – his 6.36 pass in round one was more than two-tenths behind the 6.13s of Prudhomme and Meyer – and even his improved 6.25 in round two left him little hope. Fortunately for McCulloch, Tim Grose, who had run 6,15 in round one, was upset in round two by Roy Harris – who in round one had also upset world champ Raymond Beadle – and McCulloch, Pink, and crew chief Bernie Lewis finally found the tune-up with a 6.19, but that run was well behind the stunning semifinal 6.12 of former Alcohol Funny Car pilot Tom Ridings’ surprisingly stout 6.12 (low e.t. of eliminations) in Pisano’s Arrow.

The final got rained out and was completed on Tuesday, where the veteran showed the kid the quick way home in the final, though, scoring a 6.27 to 6.24 holeshot victory for a triumphant return to the Indy winner’s circle.

“Joe [Pisano] always told me that loss crushed him; that was the closest he ever got to winning Indy," said McCulloch. "He gave me [crap] for years about how I’d ruined him. He gave Ridings a good car, but I guess I got out on him. The thrill of winning on Tuesday was everything it always is at Indy; there just wasn’t anyone in the grandstands."

Unfortunately, the Super Shops deal ended at the end of that season, and McCulloch was largely on the sidelines for the next three seasons until Larry Minor came calling with an offer to drive his Miller-sponsored Funny Car. It took a few seasons to get the car to the winner’s circle (1986 Gatornationals) but once McCulloch was paired with tuner Bernie Fedderly, they proved a steady winner and Top 10 finisher after that, leading up to “the Ace’s” 1988 Indy triumph, and another one that came just two years later. 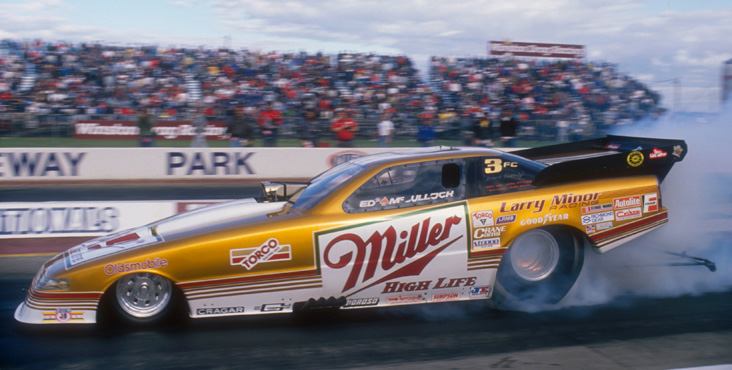 The ’88 title, McCulloch’s fourth, broke his four-win tie with Prudhomme and came after a thrilling final-round battle with Kenny Bernstein's Budweiser King Buick in the quickest and fastest side-by-side NHRA Funny Car race ever, a holeshot-aided 5.355, 271.16 to 5.347, 270.83 victory.

“Bernstein was hands-down favored to win that final, and I beat him in a holeshot,” recalled McCulloch gleefully. “He was crushed. He was pissed. He did not take it well, which I understand. At the next race, in Reading, he beat me in the final. At the other end, he said, ‘I gotcha; payback for Indy.’ I told him, ‘I’ll give you Reading for Indy any day of the week.’ “ 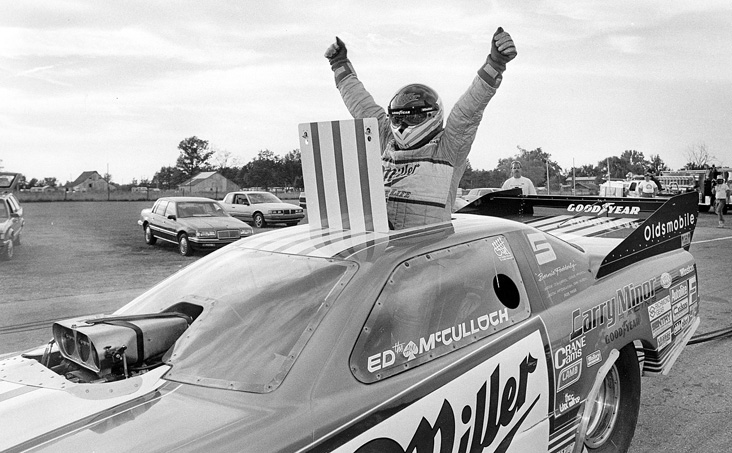 Prudhomme again tied McCulloch’s Indy mark with a dominating 1989 Indy win, but “the Ace” bounced right back to reach the final the following year, with a semifinal conquest over popular-but-unlikely opponent D.A. Santucci, whose previous Indy-defining moment had been passing out during a Top Gas run in 1969 when a wad of chewing gum got stuck in his throat. McCulloch then added the coup de grace with a final-round victory over Tom Hoover.

The big win bolstered McCulloch’s best chance for a first season championship -- and a second-round besting of points leader Force didn’t hurt -- but he ultimately finished in second place, just two rounds behind Force, who claimed his first of what is now 16 championships.

McCulloch added to his Indy legacy again in 1992, where his Top Fuel win in Minor’s McDonald’s dragster made him at the time just the third driver to win in both nitro classes in Indy.

Cruz Pedregon had joined the team in 1991, driving Minor’s Otter Pops-sponsored dragster while “the Ace” was driving the Otter Pops Funny Car, but McCulloch wanted to rejoin his old pals, Prudhomme and Bernstein, who had switched to Top Fuel in 1990. Minor agreed and put Pedregon in the Funny Car, and both ended up winning the U.S. Nationals that year. It was McCulloch's sixth and final U.S. Nationals triumph.

“I have a tremendous respect for the U.S. Nationals,” he reflected. “It’s meaning, and what it is. I think that as time goes on, with this newer generation, they’ll talk the talk about it being Indy, but I think way down deep inside it doesn’t have the meaning it did to us guys in the earlier days. I just have such reverence for the place. I’d get goosebumps pulling into the racetrack. The privilege and the honor to have won it once, let alone as many times as I did, stays with me. It made me who I am in the world of drag racing.”

Who he is, as I said, is the king of Indy Funny Cars. Still.