Twas the Friday before Christmas

Twas the Friday before Christmas, and all ‘cross the Nation
Insider fans were fretting, thinking Phil’s on vacation.
The browsers were loaded to the designated page
In hopes of a column with which to engage.

With letters all nestled correctly in place
And verbs well conjugated, between each word a space.
And Phil at his keyboard, and you at your screen
Were all buckling into our nostalgia machine.

Then out on the web, there arose quite some chatter
There’s no column here, what the hell’s the matter?
Reloading your screen, your fingers they flash
Hoping it’s just something, in your browser’s old cache.

The glow of the monitor on your frowny face
Reflected your dismay at the usual screen space.
When what to your wondering eyes should appear
But a stupid old poem; that's nothing to cheer.

What a tired old idea, to rewrite a poem
You knew in an instant, it’s time to groan
More rapid than nitro, your anger did wake
Why not a column instead on ol’ “Snake”?

Now Garlits! Now McEwen! Now Shirley and Ivo!
On Jungle! On Beadle! On Chrisman and Nicoll!
To the ramp trucks of yore, or streamliners of past
Get us a real column, and please do it quite fast.

As dry heaves that come from utter distaste
When you look at a column written in such haste
Your anger boiled over, to the top it arose
Hopeful still I’ll write more about Jungle's nose.

And then, like nitro fumes, your mind it had cleared
This wasn’t as bad as originally feared
Even as you read, and settled in place
You still hoped I’d write something ‘bout “Ace.”

You’re still in your jammies, your hair’s all a mess
‘Cause you read the Insider before you get dressed.
It’s your Friday routine, I know how you roll
But just keep going, continue to scroll.

My brow how its wrinkles, imagining your distress
I wrote this on Wednesday, this much I confess.
My cool ideas for a topic so bold and solemn
Vanished midweek into this here column.

The end of my pen clenched too tight in my teeth,
Gushed ink on my shirt and the skin beneath.
It bled through the fabric in less than a blink
Though McEwen once said there’s no such thing as bad ink.

I was fumbling and fuming, and raging aloud
So much for a column of which to be proud.
A website of words that provided the rhyme
Soon gave me hope I’d finish in time.

I typed all the words, and went straight through the poem
And filled all the lines; there, that’ll hold ‘em.
And hitting the Save button with one last stroke
Wished I’d written instead about quarter-mile smoke.

I posted the column, and made a little vow
To start the new year, with a column of wow.
So order a round of jolly hot ciders
Until next year, happy holidays you Insiders. 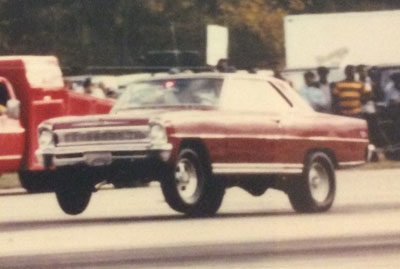 Sure, I know. With all the brainpower I invested in that waste of digital ink I could have cranked out something else, but you only have one of your own to blame, fellow reader Mark Whitmer, who shared with me his version of the classic poem. He wrote it 37 years ago, in December 1977, when he and brother Don and partner Ben Roby held the K/Stick national record at 12.64 with their Chevy II.

“Don was the genius when it came to building and tuning the 220-horse 283, but on this day, Nov.12, 1977 at Suffolk Raceway. I was fortunate to be in the driver’s seat,” he wrote. “I warmed the slicks with a 4th gear burnout and it bit pretty good at the starting line. The shift into 4th cracked the side cover of the T-10, which necessitated holding the Mr. Gasket shifter pretty firmly to keep it gear for the duration of the run. Knocked five-hundredths of the old record. Great, great memories.”

’Twas the night before Christmas, and all through the house,
Not a creature was stirring, not even a mouse.

The reason that things were so quiet that night
Is we were all in the garage, discussing our plight.
We knew that St Nicholas had too much to do,
‘Cause of all his deliveries, he’d never get through.

Our children knew better, to them we can’t lie.
In order to save Santa our Chevy must fly!
People were promised bigger camshafts and gears,
And JEGS would be closed ’til after New Years.

Under the hood, in a search for more power,
We changed the orange small block in less than an hour
Defying all reasons for racing a Ford or a Dodge,
A K/Stocker was finished that night in the garage

The moment it started you could tell from the sound
That the Moroso front tires would be leaving the ground
As it went through the burnout and moved into the lights
We knew that 12.40s weren’t out of sight.

Then like the violence of war, and with traction to spare
The concrete was smoking as it tore into the air.
We don’t know for sure who was driving that night
But his fire-suit was bright red and trimmed out in white.

At 800 feet he hammered fourth gear
And we heard Santa shout, "Merry Christmas and a Happy New Year!" 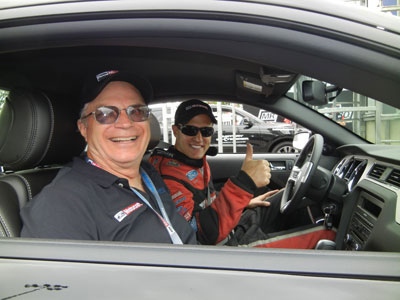 Thanks, Mark. That was fun.

Insider readers might be interested (or not) to know that I met Don on what assuredly was one of the happiest days of his life. (Yeah, well, sure … meeting me one any day can easily be the highlight of your life.)

It was on Sunday of the 2013 national event in Norwalk, where Mark was lucky winner of a new Mustang GT thanks to a Mustang 5.0 Fever drawing held by Ford Motorsports and Quick Lane. He had entered the drawing at the 2012 U.S. Nationals and got his car prior to Sunday’s final eliminations. I walked up to congratulate him and snap this photo for posterity. That’s Mark in the passenger seat and Ford Funny Car ace Bob Tasca III, who took him for a tour down the return road to show off the winner, in the business seat.

I can’t promise you a Mustang or anything else special beneath your tree this year, but I plan to continue deliver the fun times here beginning in January. Have a safe and joyful holiday with your friends, families, and loved ones. And thanks again for another great year.