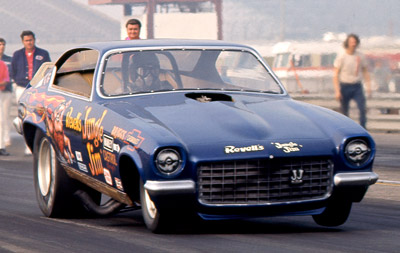 With the big reveal coming this weekend on which of the three finalists in the Top 20 Funny Cars list will make the final pairing, it’s time to take a look at the third car on the list: “Jungle Jim” Liberman’s 1973 Vega Funny Car.

The Vega — built by Romeo Palamides and campaigned from mid-1972 through the end of ’73 — wasn’t the car that got him started, the car in which he last competed, or even the car in which he won his one and only NHRA national event title. It was the only “Jungle” car on the list, so I have to believe that some of those fans who voted for this car were voting for the man as well as the machine. 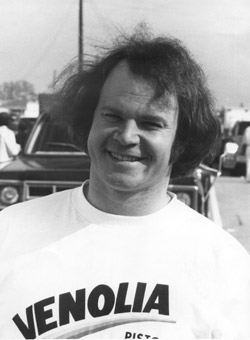 When it comes to Funny Car heroes, there are few whose accomplishments are not measured in championships, national event wins, and record-breaking e.t.s, but Russell James Liberman is surely one whose career transcended those kind of stats.

He died early — just two days shy of his 32nd birthday — in a puzzling highway accident near his West Chester, Pa., home, and like gravitational celebrities before him, like James Dean and Jim Morrison, that may have only added to his mystique (weird, too, that Elvis Presley died Aug. 16, just 24 days after “Jungle’s passing; two “kings” gone in less than a month). Almost a quarter-century after his passing, Liberman was still so highly regarded that he was voted No. 17 on NHRA’s Top 50 Drivers list in 2001.

(Before we get too far in this story, it’s worth noting that, although you, I, and everyone else have for decades have heard “Jungle’s” surname pronounced as Lee-ber-man, it was, in fact, Lib-er-man; kinda like how Connie — and Doug and Scott, for that matter — Kalitta is Kuh-let-ta and not Kuh-lee-ta and how Jim Nicoll was Ni-cole and not Nick-el. But I digress ... )

Unlike Dale Pulde and John Force, whose cars make up the other two-thirds of the finalists, “Jungle” obviously is not here to bask in the glory of the moment, so I got the next best thing: his longtime girlfriend and partner in dragstrip showmanship, “Jungle Pam” Hardy. 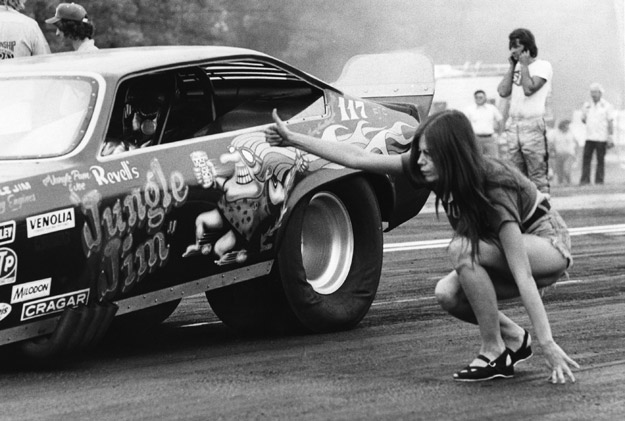 She was an 18-year-old high school senior just weeks from graduation in their shared West Chester hometown when he spied her walking down the street in May 1972. He pulled over in his screaming yellow ’72 Corvette and changed both of their lives. She had never been further from home than the next town over, had already been accepted to the local college, but hit the road and spent the next five years in snug-fitting halter tops and cut-off jean shorts backing him up after his traditional long burnouts and giving his fans even more to look at than his trademark Chevy floppers.

Although she also backed up his Camaro and Monzas, she says that the Vega is without question her favorite Junglemobile because it was on that car that the vine-swinging caricature came to life, personifying the car and the driver. The ’72 Camaro that preceded it had a caricature, too, but not as refined as the one on the Vega. 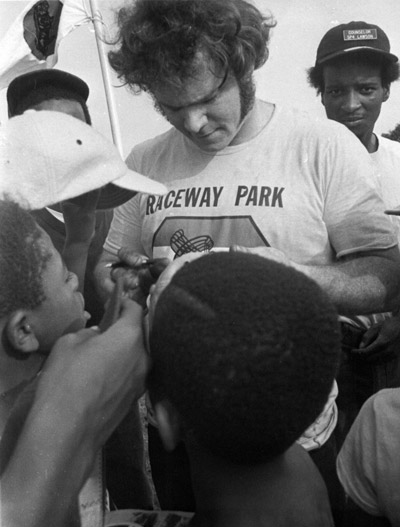 “It doesn’t surprise me at all that ‘Jungle’ made the list to begin with, but it does surprise me it’s so high, mostly because he’s been gone for so long,” she said. “But ‘Jungle’ fans are pretty passionate about him, and it seems like every one that I talk to has a story. It wasn’t just an autograph they got from him, but how he interacted with them, how he said or did something that just stuck with them. He was larger than life, and his enthusiasm for life always came across.

“When you add that with his skill of driving the car and then you put the sex angle out there [with her], it was the whole package for the ’70s. I’m not sure why no one else tried to duplicate what we were doing; I think maybe we were just lightning in a bottle.”

“Berserko Bob” Doerrer, another part of the “Jungle” entourage, was very familiar with his friend’s charm and almost Pied Piper-like following. In an interview several years ago in National Dragster, he remembered, “[Liberman] was a maniac, and everybody loved him. He was always playing his harmonica between rounds, and after the race, he’d invite fans to his pit area for a party. At any given time during the match-race season, there would be six to eight racing ramp trucks at ‘Jungle’s’ house in West Chester, Pa. It seemed like all of the other racers gravitated toward him.”

The fact that Liberman or one of his second cars — driven by a number of drivers, including Pete Williams, Jake Crimmins, Russell Long, and Roy Harris — were seemingly omnipresent on the match-race trail built him a large and loyal following, but it wasn’t always easy. Often it was just “Jungle” and Pam and “whoever fit on the bench seat in the truck next to us,” roaming gypsy-like across the country, filling hundreds of match-race dates,

“We’d run three days a week, and it was nothing for us to drive from Budd’s Creek, Md., to Maple Grove [Raceway] and then to Wisconsin all in a week’s time, then turn around and go back home, rebuild everything, and do it again,” she said.

Invariably, his constant overbooking led to many a late arrival at a track, with the ramp truck pulling into the pits just in time to unload and run — if he even got that far. 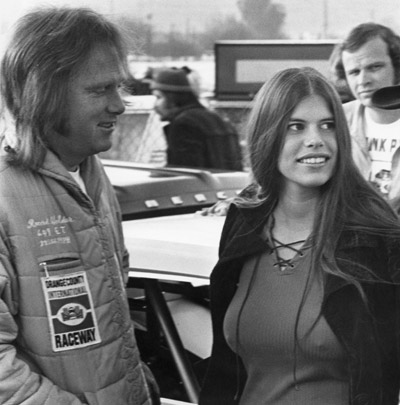 The late, great Pat Foster shared a funny story about “Jungle” and a match race against the Vega at Atco Raceway in 1972.

“We were supposed to race ‘Jungle’ in a match-race deal. First round went down at 8 p.m. sharp! Well, its 7:45 and still no ‘Jungle’ (hard to believe, huh?). The track lines up some local leaker and says to me, ‘Run this bozo, and maybe he'll show by the second round.’ We pull up, and I'm dressed and just getting in, everyone in the joint stands up and begins chanting, ‘JUNGLE! JUNGLE! JUNGLE!’ All eyes are on the highway that goes by the track.

“The starter starts yelling at my guys, ‘Get him in the car! Get him in the car!’ I look where everybody is looking, and here comes ‘Jungle,’ strapped in, motor lit and sending flames above the roof, driving that bitch from where they unloaded it out by the highway, past the gates and the ticket booth, through the parking lot and one end of the pits, right out onto the starting line, and then through the water for a huge, smoky burn out! And the crowd went WILD! I had time for one squeaky little chirp behind the line; they booed us. Then we blaze the tires against ‘Jungle,’ and again the crowd goes INSANE!! Tough gig running ‘the Jungle man’ in his part of the country or anywhere else for that matter; Jim was the king, a hard-ass racer and a great showman!”

I have plenty more on “Jungle” with thoughts from Pam, John Force, and Austin Coil that I’ll save for a later column. This weekend, look for the top-two reveal on the NHRA on FOX coverage from Las Vegas on FOX Sports 1.