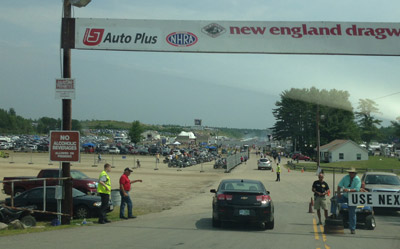 As the NHRA Mello Yello Drag Racing Series tour heads back to New England this weekend, the 2016 season is about to get real busy with four races in as many weekends, keeping us all on the fly, so to speak, traversing the East Coast and surrounding regions for all of June.

I attended the first New England Nationals waaaaay back in 2013, and it was a kick for me to see. It still has that match-race-track feel: no three-story VIP tower and no skyboxes lining the top of the grandstands, and a pretty humble entry point. After years of rolling into places like Pomona and Indy and Gainesville, I was so taken by the approach that I snapped the photo at right, which I keep on my cellphone for when I want to get a little nostalgic. It’s not the greatest photo ever taken, but it definitely set the mood for me that great weekend.

It also brought to mind a column I did back then for the National Dragster site that noted that even though it was the first NHRA national event ever held in the New England area, the region itself had a strong history of great cars and drivers from Maine, New Hampshire, Vermont, Massachusetts, Rhode Island, and Connecticut. I thought it would be fun to share the Funny Car portion here.

Bill Lawton, of Cranston, R.I., was the fine wheelman for the high-performance, East Providence, R.I.-based Tasca Ford dealership entry. This Mustang followed the team’s successful Thunderbolt and was the scourge of the Factory Experimental and Funny Car wars. Dubbed Mystery 8 for its goal of breaking the eight-second zone, perhaps the car’s biggest victory came at the 1965 NHRA Winternationals, where it won Factory Experimental honors. 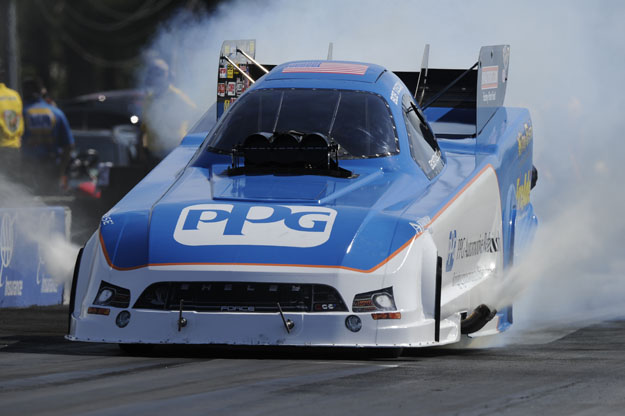 Bob Tasca III, whose grandfather ran the Tasca Ford empire, continues the family’s winning ways today on the NHRA Mello Yello Drag Racing Series tour with his Hope, R.I.-based Mustang. Tasca had dubbed the car Mystery 4 for his dream of breaking into the three-second zone. He just missed that mark in Topeka two weeks ago with a 4.000.

Bill Flynn, of New Haven, Conn., waged war with the Tasca Fords in the 1960s with his Yankee Peddler Barracuda and had a competitive heart from the beginning. The former New England Junior Archery champion and two-time minor-league batting champ was working in the service department of an auto agency and fixing up his car on the side. A trip to Connecticut Dragway in 1962 ended in a humbling defeat and an “I’ll show them” attitude, and he did.

Flynn, in his Yankee Peddler Charger, took on his former driver, Enfield, Conn.’s Al Hanna, in this 1970 match race at Maple Grove Raceway. Hanna had a long and successful string of Eastern Raider Funny Cars (below) before transitioning to jet cars, with which he’s still involved today. 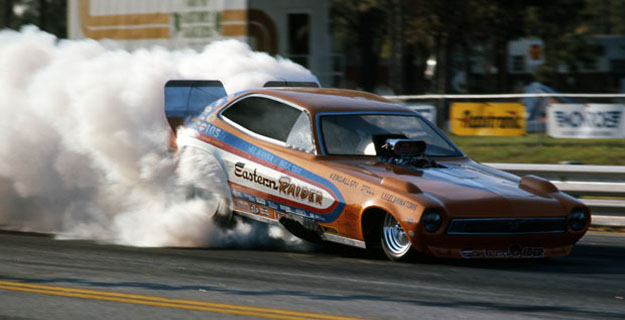 Flynn, right, also partnered with tuner Tim Kushi, left, of Pittsfield, Mass., and Kushi eventually took over the wheel of their rechristened Flynn & Kushi Racing machine, then went on to field his own line of Yankee Sizzler entries into the early 1980s. 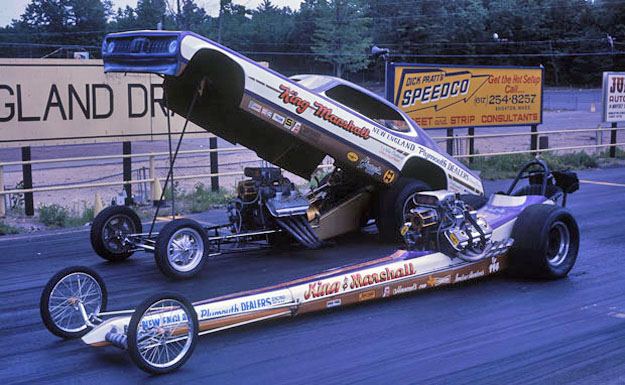 Warren, R.I., was the home base for the famed King & Marshall team of driver Jimmy King and tuner Don Marshall, who together competed in 1969-71 with a slingshot Top Fueler (known for its infamous overbackward wheelie at the 1970 Nationals) before transitioning into Funny Car with this Duster, which did not meet NHRA specs and raced only (but prolifically) on the match race trail. They were inducted into the New England Hot Rod Hall of Fame in 2006.

Rodalyn Knox, of Weare, N.H., impressed fans and fellow racers in a relatively short stint in Funny Car racing in the 1970s with her Country Girl entries. She raced first in the injected-nitro ranks before she and husband John bought this ex-Bill Leavitt Monza and went blown-nitro racing in 1978. The Knoxes left drag racing the next year but rekindled their passion for performance in the National Tractor Pullers Association. Rodalyn was named rookie of the year in 1990 and son Brian earned Mechanic of the Year honors, and the next year, she became the first woman to win any class at the NTPA’s famed Indy Super Pull. In 1995, she won her first of three NTPA Grand National points titles in the Unlimited category (the first woman to win a title in NTPA competition). She retired after winning her third title in 1998 and 10 years later became the first woman inducted into the NTPA Hall of Fame.

Kosty Ivanof, of Brighton, Mass., began racing Funny Cars in the late 1960s with his Tuff Enuf Corvettes and became a crowd favorite with his Boston Shaker Funny Cars. He almost pulled off a major upset when he was runner-up (to Gordie Bonin) at the 1979 U.S. Nationals. Five years earlier, Ivanof had reached his first NHRA final round but lost at the 1974 Grandnational to that year’s world champ, Shirl Greer. He also was the low qualifier at the 1974 Gatornationals and the 1980 Winternationals.

Long before he transplanted to Florida and became a regular winner on the NHRA tour and a thorn in John Force’s side, Al Hofmann was running his low-buck Funny Car out of Southbury, Conn. The China Syndrome cars, sometimes as volatile as their namesake, never gave a clue about what he ultimately would be capable of. Hofmann scored 15 times in 32 final-round appearances and was a regular in the NHRA top 10 from 1991, when he finished seventh, through 1996, highlighted by a five-win 1995 campaign in which he finished second in the standings to Force. He finished third in 1992 and 1994 and fourth in 1993 and 1996. Hofmann was the second Funny Car driver to exceed 300 mph. He recorded a run of 301.10 mph Feb. 19, 1994, in Phoenix to become the 13th member — and only one of two Funny Car drivers — of the Slick 50 300-mph Club. He died March 20, 2008, of a heart attack at his home in Eustis, Fla. He was 60.

As you probably read in this column earlier this year, Al Segrini, of Easton, Mass., was a hugely successful driver in the 1970s and 1980s with a number of cars, including his own Super Brut machines, sponsored by the cologne maker. He scored his first national event win at the wheel of Jim Beattie’s Black Magic Vega at the 1974 Summernationals, where he defeated “Jungle Jim” Liberman in the final. Although he also won the NHRA Cajun Nationals (1983), he’s best remembered for winning the NHRA Winternationals three times in four years (1982, 1984, and 1985, the latter two in explosive fashion in the final). He drove for a number of Funny Car owners, including the aforementioned Ivanof and Leavitt, the Castronovo family, the Hill brothers, the Petosa brothers, Joe Pisano, and Steve Plueger, and even competed in Top Fuel later in Billy Lynch’s dragster, which was based in Quincy, Mass. 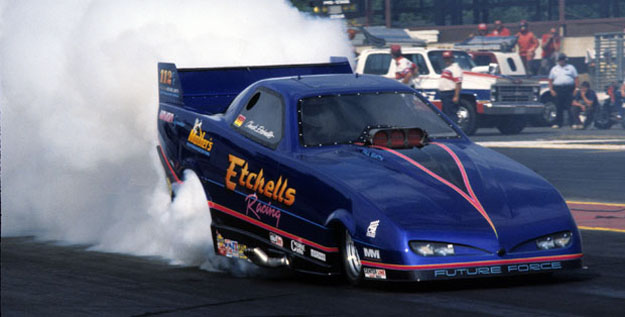 Chuck Etchells may well be the New England area’s most successful racer. The Putnam, Conn., resident began as an independent in 1979 with a line of Future Force entries, and the name proved apt as he ultimately scored 13 NHRA national event Funny Car wins and 13 runner-ups and at the 1993 event in Topeka became the first Funny Car driver to run in the four-second zone. He finished in the top 10 seven straight years (1992-98), including a career-best second-place showing behind John Force in 1993. He also was the 1990 IHRA champ.