The Mystery of the Blue Mustang 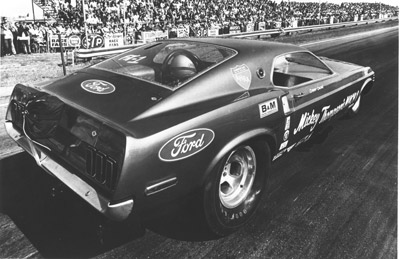 Last week’s video collection of vintage Funny Car clips was met with glee by the Insider faithful, what with all of the vintage fiberglass and dry hops, but it was the clip of the Mickey Thompson/Danny Ongais Mustang that drew the most oohs and aahs, not just for its fine camera work and sound bites from Ongais but for the car itself, surely one of the fabled cars in class history.

As we know, this car, built by John Buttera and Pat Foster with one of the first dragster-style chassis to ever see life beneath a Funny Car body, was powered by a 427 Ford SOHC engine tuned by “Famous Amos” Satterlee and won two of NHRA’s four national events in 1969, the NHRA Springnationals in Dallas (where Tom "the Mongoose" McEwen shelled a rear end on the starting line in the final) and the Nationals in Indy (where Richard Siroonian wasted a great 7.24 performance in “Big John” Mazmanian's candy-apple 'Cuda with a final-round red-light), and had there been a points-based championship back then, they undoubtedly would have won it. 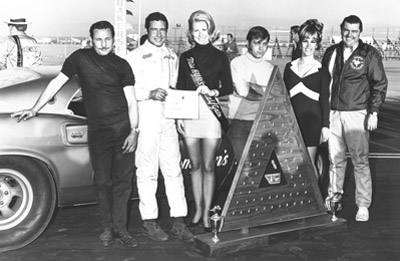 Ongais also wheeled the car to victory at the famed March Meet, again beating Mazmanian’s flopper in the final round and setting low e.t. at 7.56.

As I mentioned last week, the video is so cool in many ways. Opined Insider regular Robert Neilsen, “This particular video is one of my favorites. I love to see these cars running down the track and bouncing around from the top-end shots. This video demonstrates exactly how unruly the cars of this period were to drive. They were similar to the fuel altereds of that same time period as they were apt to go anywhere but straight.”

And therein Thompson’s team saw a problem that they tried to fix by adding airfoils to the top of the car, as you can see below. They tried it mounted on the roof and, just before the Bristol event, with another mounted on the hood. The first photo is from the National Dragster archives and the second was sent to me by “Flyin’ Phil” Elliott. 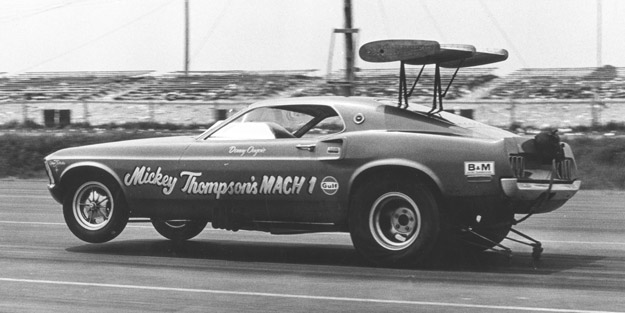 In the photo below, also from the National Dragster archives, you can plainly see the holes in the hood after the wing was removed, in part at the insistence of tech officials, who noted the body couldn’t be lifted in case of emergency, and partially because it provided too much downforce and was causing the engine to burn pistons.

So what happened to the fabled blue pony car? I’m glad you asked because it’s an interesting story unto itself.

According to Insider reader Lee Oilund, the blue Mustang was heavily damaged in a postseason crash during a testing session on an airport runway in California with Team MT driver Arnie Behling at the controls. Oilund says his info on this — previously unknown to me and some of my drag-history-geek friends — came directly from Satterlee, who said the whole mess was hushed up due to the car’s notoriety and the fact that Ford, which was still sponsoring them at the time, might not have been too keen on the location of their impromptu test.

Oilund may be one of the foremost experts on the car, having done his homework to an A-plus degree by interviewing not only Satterlee and former MT drivers Dale Pulde and Foster but also Thompson’s sister Colleen, son Danny, and daughter Lyndy and by poring over the pages of magazines from the ‘60s and '70s.

So what’s Oilund’s stake in all of this? Why does he care so much?

Well, it turns out that he got the chance to buy what he thought was the fabled blue car (plus the body of the Pulde-driven Revellaser ’72 Pinto) from a fellow Canadian, who had previously bought the cars from Thompson. The first buyer had documentation stating such and even photos of the cars coming across the Canadian border at Bonner's Ferry, Idaho, so Oilund bought them. 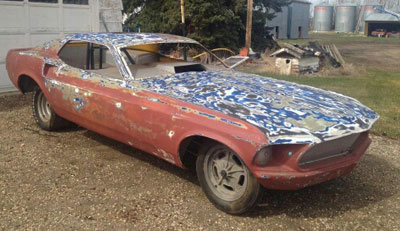 It wasn’t until much research and investigative sanding that he says that he found out that what he really owned was the white Mickey Thompson Mustang, driven in 1970 by Johnny Wright. Although it was painted blue when Oilund got it, the sanding revealed other colors, including yellow (run in preseason testing) and the 1970 white, and a subsequent gold and red scheme covered by blue, all above the primer coat. Perhaps most telling was that the body had ’69 Mustang side-marker lights and not the ’68 Cougar lights that had been on the original body. The body was also missing evidence of the above-mentioned hood holes and had been stretched 6 inches with an insert just ahead of the windshield.

That’s the bad news. The good news is that, according to Oilund, the ’70 Mustang was actually a bit of a Frankenstein, composed of components from both the wrecked blue car and Foster’s semi-twin red car, which was destroyed in a nasty two-car crash at the 1969 Springnationals that claimed the life of Gerry Schwartz. (I say “semi-twin” because Foster’s car was built on a 123-inch wheelbase and Ongais’ on a 116-inch frame.)

(The 1970 car also was used as a test bed for Thompson’s “oxygen” car, which used compressed air in place of a supercharger, an experiment which looked good on the dyno but basically went nowhere on the track, as was the case with a subsequent experiment by Gene Snow.) 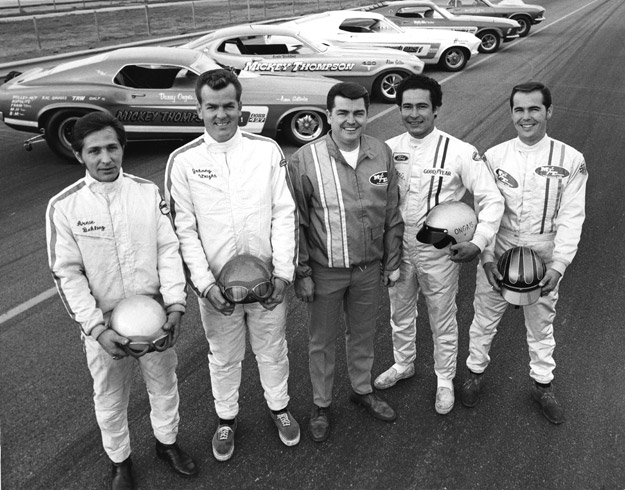 The Pinto body that Oilund has is definitely from the Revellaser car (shown here in a publicity photo), as confirmed by Pulde, who told Oilund that the previous three versions of the jinxed Pinto had been destroyed in crashes. The surviving body was not run long as it was replaced at the end of the 1972 season by Thompson’s Revelleader Grand Am, which debuted under Pulde’s control at Lions’ Last Drag Race in December.

As to the famed titanium frame that once sat beneath the Pintos, according to Pulde it was broken beyond reasonable repair while racing in Calgary, Alta., and, to Oilund’s knowledge, is still hanging in the rafters of the shop of the unnamed Calgary-area gentleman who bought it, fixed it, broke it again, and refuses to part with it.

In the meantime, Oilund has raced the Pinto body, sliding a period-correct Dixon chassis beneath it and powering it with an alky-burning 350 Chevy just for fun. The Mustang chassis was too old to be recertified and raced and, honestly, too much a bit of history to race.

Thanks to Lee for sharing his story and filling in some missing pieces of the puzzle of one of the sport’s greatest Funny Cars.