Key players from the Keystone State

Another week on the road, and another “retro” column from the Phil Burgess Archives to tide you over. When this column is published, I’ll be in Reading for the Dodge NHRA Nationals (Keystone Nationals for all you old-timers), and with Pennsylvania having such a wealth of drag racing history, it’s only appropriate to look back at some of the extreme talent that has come out of the Keystone State.

Of course, the state’s most famous racer remains Joe Amato. In addition to his five NHRA Top Fuel championships, the Old Forge, Pa.-based legend scored 52 victories in Top Fuel and five behind the wheel of an alcohol-fueled dragster before that. Amato competed in 99 final rounds in Top Fuel and won the Budweiser Shootout in Pomona a record six times. He finished in the top 10 an incredible 19 straight years, from 1982 through his sudden retirement at the end of the 2000 campaign due to ongoing vision problems after suffering a detached retina earlier in the year. Amato’s Top Fuelers, tuned by longtime crew chief Tim Richards, were the first to exceed 260 mph (1984) and 280 mph (1987). Amato's final victory as a driver came at the 2000 Keystone Nationals at his home track, Maple Grove Raceway, in front of a large number of friends and fans.

It goes without saying that the king of the jungle back then when it came to match race dates and popularity was the “Jungleman” himself, Jim Liberman. With his show-stopping performances and theatrics and gregariously open nature, he was John Force before John Force was John Force. Or maybe John Force is the latter-day “Jungle Jim.” Either way, there’s no disputing his popularity, or the transplanted Californian’s ties to Pennsylvania when he moved to West Chester, which lies about 25 miles west of Philadelphia. 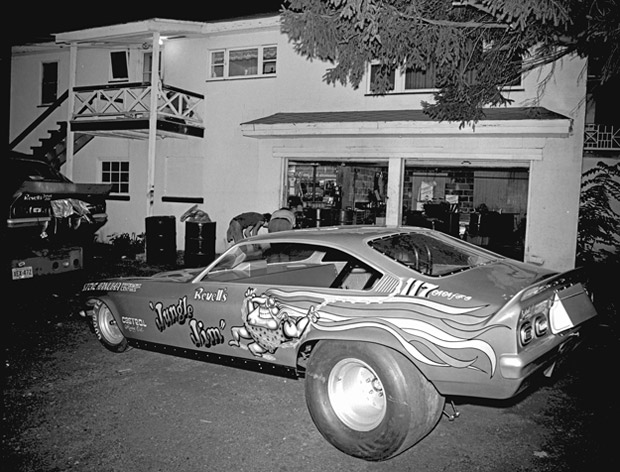 “Jungle’s” digs in West Chester were actually made semi-famous by this seminal Steve Reyes photo showing his rig outside the two-story home, which was located on Route 202 between West Chester and Wilmington. 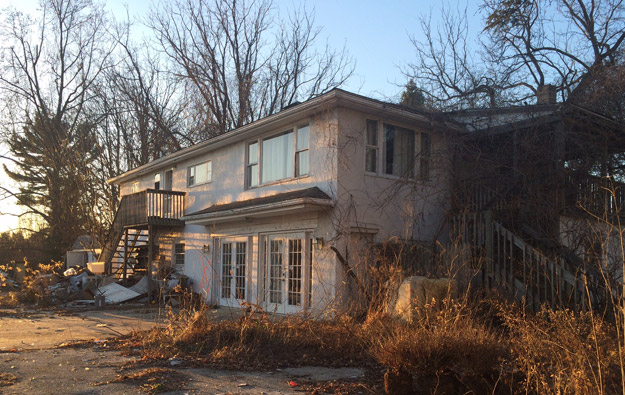 Earlier this year, Competition Plus’ Bobby Bennett drove by the residence that at one time was a gathering place for the quarter-mile elite and found it in extreme disrepair with ominous large X’s on the walls. The home has since been demolished.

If there was a rival to Liberman’s popularity and match race calendar on the East Coast, it was Bruce Larson, whose red, white, and blue USA-1 Chevys — such as this Camaro, shown at the 1972 Summernationals — were a staple from the mid-1960s through the mid-1980s and eventually led to the 1989 NHRA Funny Car world championship (sadly though, not in USA-1 colors).

Liberman’s pal and longtime rival and foil on the East Coast scene was Lew Arrington and his monstrous and mean-looking Brutus Mustang, shown boiling the hides in Englishtown in 1972. Like Liberman, Arrington was originally based out of California but later became a resident of Pennsylvania. Although Arrington, who died in February 2008 of heart disease at age 69, raced through 1979, he drove other Funny Cars and, famously, the first rocket-powered Funny Car. The Mustang pictured here, the last of the Brutus line, burned to the ground in a nasty 1972 fire at New England Dragway.

The Lewis family’s long relationship with Maple Grove Raceway extends beyond the running of the track; brothers Mike and Kent also raced Top Fuel dragsters out of their Narvon, Pa., base in the 1970s, first with a front-engine car with Ed Crafton driving until a wreck in 1971 and then a rear-engine car — the first of the Sparkling Burgundy line — with a number of pilots, including Sarge Arciero, Fred Forkner, "Satch" Nottle, Dale Thierer, and Kerry Sweigart. They did a lot of winning of big local events, including Capitol Raceway’s Mr. USA Fuel Eliminator, and came within a round of winning the division title in 1973.

The aforementioned Arciero, of Broomall, Pa., had a long and colorful career, beginning with Funny Cars behind the wheel of Jim Fox’s Frantic Ford Mustang in 1970 and 1971 before switching to Top Fuel. After driving for the Lewis brothers through 1972 –- actually splitting cockpit time with Forkner –- Arciero got the ride for which he is best remembered, the Thomas-Lenhoff-Flurer Jade Grenade (pictured), which also later had drag racing journalist Jon Asher as a partner. In 1974, they stunned the troops at the U.S. Nationals by setting low e.t. of the meet in round one with a 6.01 to earn the coveted John Mulligan Memorial Low E.T. trophy from M&H. It was Arciero’s last ride in the car; Ron Attebury replaced him the following season. Attebury later was replaced by Ted Wolf and then by Don Roberts.

Fans attending this year's Maple Grove event will get to relive a little of the magic when Arciero is welcomed into the Maple Grove Walk of Fame, Mike Lewis drives a Sparkling Burgundy tribute car (the A/Fuel Dragster of Anthony Dicero), and Rich McPhillips converts his green A/FD to a Jade Grenade tribute car. That should be big-time fun! 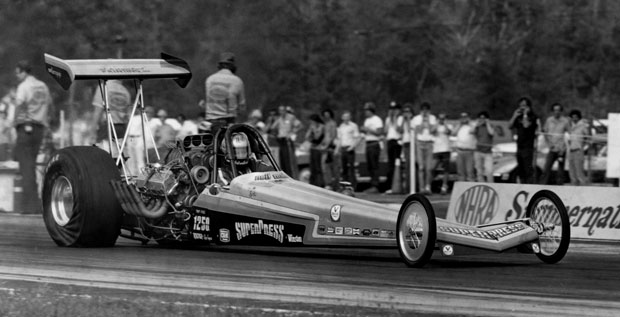 Drag racing fans might remember Neil Mahr for the exquisite line of Superstars of Drag Racing calendars that he printed out of his Pennsylvania-based Mahr Printing and Superpress, but he also had a surprisingly competitive Top Fueler for a short period in the late 1970s and early 1980s. After running nothing faster than a Street Roadster in Comp, the fiercely competitive (and sometimes short-tempered) Mahr jumped into Top Fuel with a Don Garlits-built car that carried him into the five-second zone. He later opened one of the largest campgrounds in Michigan, next to Michigan Speedway, and, after retirement, established Villa Mahr, a vacation getaway in the Virgin Islands.

As mentioned, Thierer, of Whitehall, Pa., had a pretty good run in the Lewis brothers’ machine; he also had a quality ride for a few years with Jim and Alison Lee and pretty much bookended his driving career with the Hemi Hunter Chevy-powered dragster (pictured) of Jim Johnson, Gary Peters, Dan Rauch, and Wayne McCullough. Beginning in the late 1960s, he drove the original, which won the Division 1 championship in 1971, and about a decade ago was part of the car’s resurrection as a Nostalgia Top Fueler. Also as noted above, Walter “Satch” Nottle was another of the drivers for the Lewis brothers’ Sparkling Burgundy car; he also drove for Forkner (Division 1 champs in 1973) and was supposed to replace Ted Wolf in the Jade Grenade car but suffered a heart attack a few weeks before their 1975 season opener in Gainesville. Don Roberts ultimately took the seat and crashed the car on his first run. Nottle recovered and went on to drive Joe Siti’s Philadelphia Flyer in 1977; he was killed in a plane crash on his way to the Gatornationals in 1978.

Pittsburgh's Wolf drove a number of Top Fuel cars, including for Jim and Alison Lee, plus (as mentioned above) the Asher-Arciero-Flurer Jade Grenade and Jim Bucher's Chevy-powered rail, but this was his own car, the Wolf & Niemeyer Katz & Jammer Kids dragster. Perhaps Wolf's finest day was at the 1974 U.S. Nationals, where he reached the third round (when it took five rounds to beat a 32-car field; today, that would be a semifinal finish) in the Lees' machine, falling to Dwight Hughes, who then lost to eventual surprise winner "Marvin Who?" Graham.

Fox’s line of Frantic Ford entries was among the region’s most popular throughout the years as the Broomall, Pa., owner fielded a number of Mustangs from the late 1960s through the late 1970s with sponsorship from K&G Speed Associates. Ron Rivero, Arciero, and Roy Harris all drove the car, and the old-school Mustang was later replaced by a Mustang II. Fox partnered with Freddy Frey mid-decade and with driver Dodger Glenn and experienced great success on the match race trail as well as some success on the national event tour. In 1976, the team won the prestigious Dutch Classic, the Division 1 race in Englishtown, and the Funny Car Nationals at York and made it to the semifinals of the Summernationals. After the 1977 season, Fox and Frey sold the operation to Glenn, who was killed in the car in July 1978 at Maple Grove Raceway. Bobby Frey resurrected the famous name as a Nostalgia Funny Car a few years ago.

A Pennsylvanian by way of California, Mike Dunn made a name for himself in Funny Cars, following in the footsteps of his famous father, Jim. He first came to fame at the wheel of Roland Leong’s Hawaiian Punch Dodge in the early 1980s when he won the Golden Gate Nationals in 1981. In 1986, he began driving for legendary Joe Pisano in an Olds-bodied car that perpetually set top speed and made the class’ first 280-mph pass in 1987. Together they won the U.S. Nationals in 1986 and four other races through 1989. Dunn moved from Southern California to Mount Joy, Pa., in July 1990 and quickly partnered with Pennsylvania businessman Ed Abel on a Funny Car that was sponsored by Snickers candy bars and tuned by his father. They won almost immediately in Dallas, were runners-up in Topeka in 1990, and won three times in 1991. In 1992, Dunn moved to Top Fuel, driving for former baseball slugger Jack Clark, and ran 297 mph in Houston; they were the favorites to break the 200-mph barrier until Kenny Bernstein did it in Gainesville. In 1993, Dunn began a long association with Darrell Gwynn and crew chief Ken Veney that lasted through the 2001 season and produced 12 event wins.

“Rapid Roy” Harris, of Drexel Hill, Pa., was in on the ground floor of Funny Car, beginning with a wild altered-wheelbase Plymouth in the late 1960s, then drove the Frantic Ford for a few years and drove for “Jungle Jim” Liberman before running his own operation again beginning in the mid-1970s. With partner Tom Ryan, he broke some new sponsorship ground in 1979 with a Budweiser sponsorship (Kenny Bernstein’s famous Budweiser King machines began in 1980) on a quick Trans Am. He used Arrington’s old Brutus name on a number of his cars, including Arrows of the early to mid-1980s and a later Thunderbird.

The late D.A. Santucci, of Glenwillard, Pa., first came to national attention not just because of his surprising Top Gas win at the 1969 U.S. Nationals but because earlier at that event he had blacked out after a piece of chewing gum became lodged in his windpipe during a qualifying pass. After Top Gas went away, Santucci moved to the Funny Car class in the late 1970s with a string of solid-performing Black Magic cars — Vega, Omni, Mustang, Thunderbird, and Cutlass — through the early 1990s.

Nick Boninfante, of Upper Darby, Pa., began his career with gas dragsters and went on to become one of the East Coast’s steadiest Funny Car owners for three decades. He progressed into factory experimentals with an ex-Malcolm Durham Corvair, injected on fuel, then a short-lived Firebird that was lost to fire. In 1973, he began a long association with Pat Walsh on a series of 427 Chevy-powered U.S. Male Top Alcohol Funny Cars, including a Vega, Mustang II, Dodge Challenger, and Datsun Z car. In the mid-1980s, they made the leap to the nitro ranks, first with Walsh behind the wheel, then veteran R.C. Sherman, Richard Hartman (with whom he won the 1989 IHRA Funny Car championship), and others driving for him. He campaigned with the cars bearing that moniker until 1991, when he decided to concentrate on his business, Boninfante Performance Clutch Parts. We lost Nick a little more than a year ago, but his spirit lives on in his son Nicky, part of the defending world championship DHL team of Del Worsham. 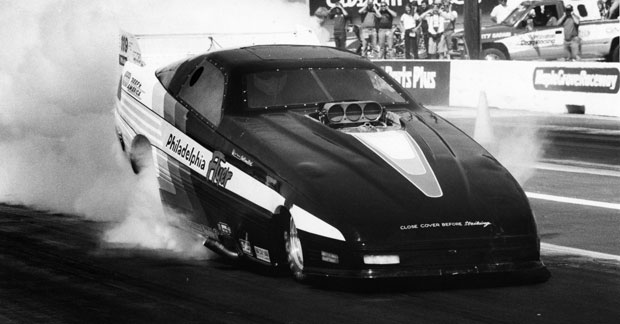 Frank Kramberger stepped up from the alcohol ranks to nitro with a series of Philadelphia Flyer entries, including this Ford Probe, which he bought from the Candies & Hughes team in 1990.

OK, that’s it from the road. The pace slows a little from here on out, so I’ll be back next week with some new original stuff to share as we churn forward toward the end of the season and the final reveals in the Top 20 Funny Car list.