Response to last week’s column full o’ photos was deliciously marvelous, with lots of my pals here digging my amateurish attempts because, after all, even a bad photo of a great Funny Car is worth seeing, right?

As I’ve said numerous times, sometimes the quality doesn’t matter as much as the fact that A) sometimes we’re seeing an image that has never been shown in public, retrieved from some old shoebox in the attic, and B) we’re all seeing the past through one eyewitness’ exact view, how he or she saw it and is helped to remember it, which either stokes the memory, refreshes the memory, or even brings the memory to light from the dark corners of Forgottenville.

(Images are powerful. My kids are always telling me they remember somewhere we went or something they said we did from when they were 1 or 2, but it’s really just that they’ve seen the video I took and made the memory theirs because of it.) 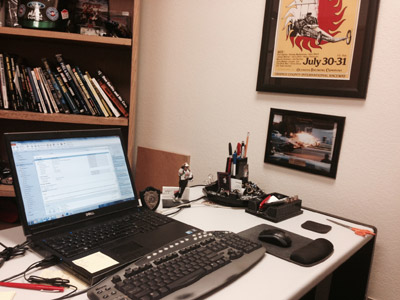 Kean's photo in my office, below an OCIR poster 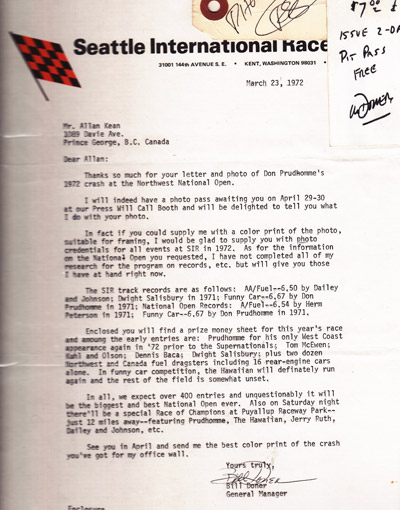 The story of my forged photo credential resonated with longtime Insider reader and contributor Al Kean, who, when just a teen like me, captured one of the most dramatic – and certainly one of the wildest – photos ever taken when he caught Don Prudhomme’s fiery Hot Wheels 'Cuda nearing takeoff at the top end at the 1971 Hot Wheels Northwest National Open in Seattle. Prudhomme was racing Dave Condit in the L.A. Hooker Maverick in the final race of the day.

"I was watching everything through my camera’s viewfinder," Kean told me a few years ago in a column about the photo. "The cars staged and launched. I was following the cars, and I thought I saw flames coming out of 'the Snake’s' windows as he neared the finish line. I remember thinking that it must just be glare off something – he couldn’t really be on fire, could he? I kept following the cars and clicked the shutter when they crossed the finish line. I then took the camera away from my face and looked downtrack to see Prudhomme’s car, with NO body on it, still in a wheelstand. It was at least 300 feet after the finish line before the car’s front wheels returned to earth.

"I had no idea what I had gotten in the photo. I had to wait several days for the color slides to get developed after we got home. It was pretty exciting to finally see the photo that I had taken.”

Kean, who last year at the Gatornationals presented me a copy of the photo with a personalized inscription plaque, wrote me again this week to recall how track manager Bill Doner used the photo in the centerfold of the 1972 program and offered Kean a season photo pass as payment. (Good ol’ “Dones” … the photo could have commanded some big bucks, but he got it from Kean for a photo pass that cost him nothing; the man is legend.) Doner also made a copy of the photo for his wall.

“His directions were to report to the will-call trailer to pick up my credentials when I arrived,” Kean remembered. “Upon arrival, there was no photo pass waiting for me, but the person there called Bill on a radio, and he said he would be right there. A couple of minutes later, he showed up, got my pass and tickets taken care of for me, and gave me a program that had my photo in the centerfold. He then drove me to the pits in his new Datsun 240Z and introduced me to Prudhomme and [Tom] McEwen. Wow! For a 15-year-old kid, this was awesome!

“I then used my (rather nondescript; would have been easy to forge!) photo pass to check out some spots along the guardrail. I made my way to the finish line just as Top Fuel was getting ready to start qualifying. I stood a couple feet outside the guardrail just past the finish line. The first car down was Hank Johnson in the front-motor Daily & Johnson car, now with a wing over the engine. I was not prepared for the noise and huge gust of air produced by a dragster at 230 mph, and it blew me onto my behind. I am sure anyone there would have found this scene very funny. I can imagine that one seeing this would have thought something like, ‘Stupid kid is going to get himself killed.’ And that photo didn't even turn out!

"Common sense prevailed, and I found some good spots closer to the starting line to get photos like the one above. Steve Evans was once again the announcer at this event and several times talked on the PA about my photo in the centerfold of the program, probably to increase program sales. All in all, a great weekend for that kid named Al Kean.

“Doner will be back in Seattle for this year's Northwest Nationals (for the 50th Funny Car anniversary) and has suggested I look him up, which I will try to do. Thanks for letting me share my experiences.”

Quite a story, Al; all I ever got from my teenage photo pass was a 35-years-in-the-coming scolding from Pat “Ma” Green, who handled credentials at Irwindale back in the day. After reading my confession of that counterfeit job a few years ago, she wrote to tell me that she would have kicked my butt right off the starting line if she had caught me. Love you, "Ma."

Thanks to all of you for sharing and enjoying these great stories of the day.