'Jungle's' Vega: Who knows which nose? 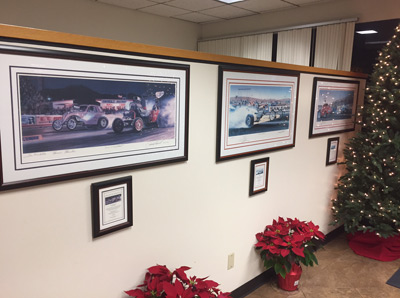 Many longtime NHRA fans may remember artist James Ibusuki, who burst onto the scene in the 1990s with a series of stunningly accurate, photo-realistic lithographs depicting great scenes from drag racing history.

Although his business was a casualty of the recession of the early 2000s, many of his works still hang on the walls at NHRA headquarters, including these three in the holiday-attired main lobby, and he still actively follows the sport and this column, which brings us to today’s subject.

Ibusuki’s eye for detail, which was evident in his artwork, extends across his enjoyment of the sport, and after reading the recent columns about “Jungle Jim” Liberman’s Vega and its missing nose, he shared some interesting insights about the Vega or, more precisely, the multiple versions of the car that existed and create confusion in the timeline and raise questions about which car (or pieces of cars) are in various collections.

After studying multiple photographs and consulting the records he began keeping in the 1970s, Ibusuki believes there were, in fact, three “Jungle” Vegas in the 1973-74 time frame on which we have focused. I’ll turn the column over to him to let him share his findings: 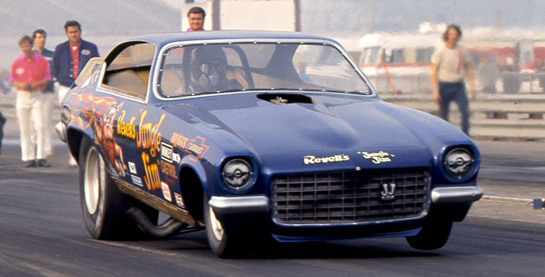 The first Vega was the Romeo Palamides creation that won NHRA's Top 20 all-time Funny Car countdown. It debuted in August 1972 and came to California that fall. This was SoCal's first chance to see "Jungle Pam" with the same J.J. Vega that was on the memorable Hot Rod magazine cover.

Several things made this Vega unique from the subsequent Liberman Vegas. First, this was Ron Pelligrini's (Fiberglass LTD) original version of a Vega Funny Car body. They were noticeably different from the West Coast bodies of Fiberglass Trends, J&E, and Kirby-Buttera. The LTDs drooped downward from the windshield toward the nose. Second, the early LTD Vegas had a larger grille shell rectangle than the West Coast bodies. And finally, the West Coast Vegas had a full-width front spoiler while the LTDs were only the width of the grille. 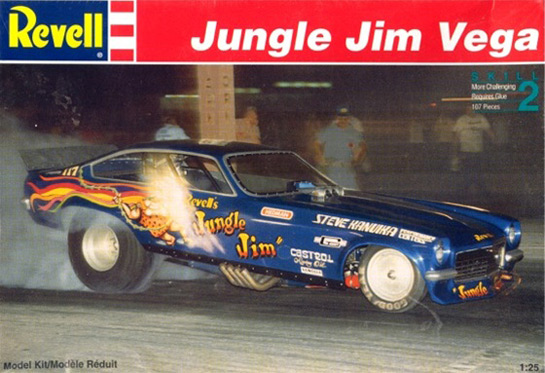 Here's the second J.J. Vega: This is a Steve Reyes shot taken at York in 1973. Although J.J. drove this Vega on occasion, Roy Harris was the main driver. Notice the differences between these two Vegas. This one doesn't have the nose droop and has a smaller grille opening and a full-width front spoiler. The first version had a darker candy blue while this one was much brighter like the earlier J.J. Novas and Camaros. The No. 2 J.J. Vega is easy to spot by noting the diagonally stacked lettering of "Jungle Jim" on the doors. The Nos. 1 and 3 were stacked normally like the Novas/Camaros. While the No. 2 Vega is closer to Stine's souvenir, I don't think it's a match. Most notable is the full height of the front spoiler. On the No. 3, it was shaved down, which resembles Stine's Vega nose. 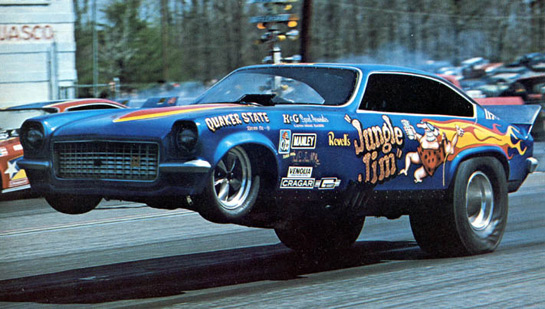 So now on to the No. 3. This is a pretty well-known Jeff Tinsley shot, taken at Aquasco and most often seen in Quaker State Oil ads. Although No. 3 debuted in early 1974, it wasn't a slant-nosed Vega. 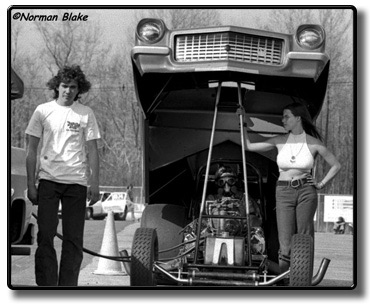 Here's a Norman Blake shot of No. 3: Notice how the Stine matches this Vega grille much more so than the No. 1. No. 3 has the full-width, shaved-down spoiler, and the grille shell sizes match.

Now let's zero in on the smaller details. Notice how Stine's "JJ" grille badge is in gold. Even at its small scale, you can see this in the Aquasco photo.

However, if you look at the No.1's grille badge, it is noticeably larger and in silver. You can also see how No. 3's horizontal bars of the grille match, in particular, the exaggerated perspective angles as they move toward the top. Stine's souvenir also lacks the "Revell's Jungle Jim" lettering above the grille we see in the No. 1 photo.

The Blake photo also shows duct tape over the central area of the spoiler lip, the same area where Stine's souvenir has a chunk missing! 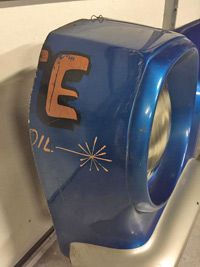 However, here's the final kicker that convinced me this is the No. 3 Vega. Look at the side-view photo that shows a gold-leaf "E." You can see the word "oil" just beneath it. The full fender read "Quaker State Racing Oil" on the No. 3, which you can see in the Aquasco photo. If you refer to the No. 1 photo, you'll notice that the front fender tips were bare and that J.J. was using Castrol oil.

So, why was Stine's Vega grille sawed off? I used to think it was because J.J. had an on-track mishap, but since the nose is preserved, we now know this isn't true. I've concluded it was done to update the '73 Vega to a '74 model. This No. 3 became much more well known as the gold-flamed '74 slant-nosed Vega that pulled the giant wheelie at the 1974 Summernationals! I know this because all of the lettering matches. Also, note the distinctive yellow/red top center stripe on the No. 3. That remained on the gold-flamed Vega!

This is a great image because it shows the No. 2, near lane, racing No. 3 at Maple Grove. Roy Harris is in No. 2 with Liberman in No. 3. From 1970 to 1974, I created what I call my "FC Notebooks." Because we had a large family, I couldn't afford to save every issue of ND, so I used to type up the key facts from every fuel match race and clip the best photo captions into a notebook. (Yes, I was a Funny Car nerd! LOL)

I found the caption to this "dueling Jungle Jims" photo: An all-"Jungle Jim" final round for Funny Car Eliminator was a side-by-side affair until Roy Harris, driver of Liberman's
No. 2 car, could not shift into high gear and had to shut off. Liberman's winning time was a 6.55, good for Low ET. (Photo by J.R. Cutler)

So I cross-referenced this race to my lists of races in the same notebook. It was May 11, 1974, 4th annual Pennsylvania Dutch Classic, the biggest race at the Reading track back in the 1970s. The 6.55 low e.t. time was mentioned, too. 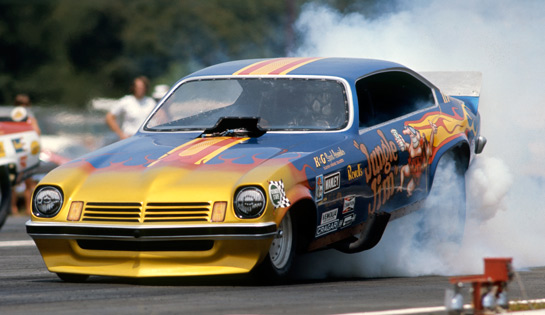 The No. 3 still has the '73 Vega grille in that photo, but by the July Summernationals, it would be lopped off and replaced by a '74 slant-nosed grille. They hid the "surgery" with the yellow flame design.  This updated version was my favorite J.J. Vega because "Jungle Jim" was in gold leaf for the first time, and the candy blue was closer to the Novas and Camaros, which were my all-time-favorite "Jungle Jim" Funny Cars!

In this case, I believe you have misidentified Stine's Vega nose. It is not the first Revell J.J. Vega but the third. The car Garlits has in his museum is No. 1. I visited the museum in 1996 and wondered why J.J.'s first Vega had a '74 slant nose. Then, years later, I heard the story of it going to Nick along with the facelift. So the No. 1 nose is the one we've never seen.

OK, did you guys follow all of that? Wow, thanks to James for what amounts to a "Jungle Jim" Vega spotter's guide. I had hoped to talk to Stine before this column went live this morning (and actually exchanged an email with him), but that didn't happen. I hope to speak to him this morning, and, if I do, I'll share his thoughts.