NHRA’s annual SEMA Breakfast Wednesday saluted the yearlong 50 Years of Funny Car celebration and was the site of the official reveal of the top two cars in the yearlong fan-voted Top 20 Funny Cars list, though most people already knew that the Sunday announcement of Dale Pulde's War Eagle Pontiac as No. 3 left just two cars: “Jungle Jim” Liberman’s ’73 Vega and John Force’s ’96 Firebird.

Force, “Jungle Pam” Hardy, Don “the Snake” Prudhomme, Tom “the Mongoose” McEwen, and current NHRA Funny Car world champ Del Worsham were on hand for the announcement and to take part in a panel discussion emceed by Bob Frey. The 90-minute affair was broadcast on Facebook Live.

A lot of history was covered – how the Mattel deal got started, etc. – for the newbies in the crowd, but most of you guys know all that, so I thought I’d instead share some of the better quips from the show.

When asked by Frey if he was just born cool, Prudhomme surveyed his fellow panel members and said, “They didn’t think I was cool when I was whupping their butts.” 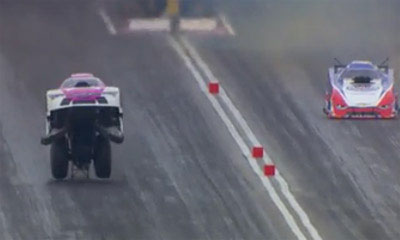 Force, on Cruz Pedregon’s monster finish-line-crossing wheelstand last Sunday: “After seeing that, the guys who really drive the wheelstanders, they packed their [stuff] and went home."

“Jungle Pam” shared a bit of info I’d never heard about that ill-fated final. “Our fuel tank had blown up on the starting line [on a previous run], and someone loaned him a fuel tank, but it was a smaller one than he’d been running, which didn’t seem like a big deal because we didn’t push that much fuel. We get up there for the final round, and he didn’t compensate with the lead weight on the front, and he’s out there, stabbed it going for the gold, and up it went. That was a real heartbreaker. He didn’t talk to anyone for about half a day.”

Force also recalled how Pedregon’s wheelie reminded him of Al Kean’s famous photo of Prudhomme’s wild and fiery flight through the lights in Seattle while racing the L.A. Hooker in 1971, which was owned by Force’s cousins, the Condit Bros., and his uncle, Gene Beaver.

“His front end was four feet in the air – on fire! – and my Uncle Beav came to me and said, ‘Look at this picture. You can’t even beat that son of a bitch when he’s [flying through the air on fire].’ ”

Prudhomme explained of the wild ride, “We didn’t know much about aerodynamics back in those days, but the fire ate up all of the oxygen under the car, and it changed the aero, and the car lifted off.”

Prudhomme, on the match race days: “We’d go to all these different tracks; we were like a rock band: We’d go in, race, and get paid. That was an incredible way for a bunch of young people to make a living.”

McEwen remembered how the harmonica-loving Liberman would call him in the middle of the night and tell him, “Hey, ‘Mongoose,’ I learned a new song,” and then play for hours while McEwen laid the phone down and went back to sleep.

More McEwen: “One time, ‘Jungle’ showed up at Fremont, it was at the end of a long tour, and he rolled in there and didn’t have nothing but a short block, and he went around and borrowed all the parts he needed, then won the race.” 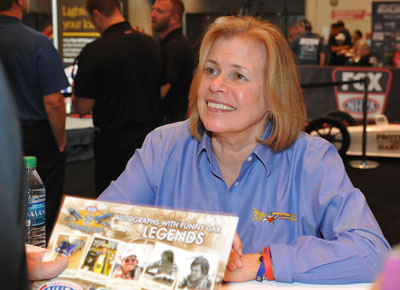 There was, of course, some spirited conversation about “Jungle Pam’s” skimpy attire of the 1970s. After Frey asked her where her wardrobe came from, he swears Prudhomme muttered “heaven” before she said that it was coordinated by Liberman, who gave her a handful of cash and instructions on what to buy. She admitted later that certain sheer clothes were probably “not a great choice,” but “it was just our shtick.”

Hardy remembered one track official at Atco trying to kick her off the starting line. “I was out on the track, and an official walked up and said, ‘What are you doing out here? There’s no women allowed on the track,’ so I went back and told ‘Jungle,’ and he told them, ‘If she’s not out there, I’m not running.’ We ran.”

After McEwen swore that track operators booked Liberman as much for her as for him, she talked about the team cars that Liberman had to fill his many match race bookings. “ ‘Jungle’ would license his name out and have, say, Russell Long or Roy Harris and send them to Connecticut while he raced Maple Grove. The problem with that was that [the track operator] wanted ‘Jungle,’ and we even got to the point where I’d go with the other car so maybe they would think it was ‘Jungle,’ but it never worked out that way. ‘Jungle’ was the car. He built them, he tuned them, he drove them; the other guys could drive the car, but they couldn’t make it run like ‘Jungle’ could." 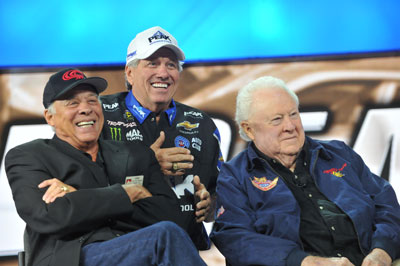 Blue Max fan Worsham, on his earliest Funny Car memories: “My dad would drag me out there on Wednesdays and Saturday nights, and Don Prudhomme would be out there, John Force would be out there, Tom McEwen, and then the Blue Max would show up. His car ran good, looked good, sounded good, and did big burnouts. I saw ‘Jungle’ there one time, and I believe he did a fire burnout, and they had to hose the car down because it caught on fire.”

Force: “I remember the first lesson that McEwen taught me. We were at Orange County [Int'l Raceway], and he sent one of his guys over, who said, ‘McEwen’s car’s broke; he’s got a broken crank. He’s not going to make the final. He’s going to up there and fire it, and you go ahead and single.' So I do a big ol’ burnout to the lights – I didn’t care if I ran out of gas because I’d already won it – and I’m backing up, and there goes McEwen past me [on his burnout]. We got up to the line, and he smoked me, and he told me, ‘Never believe a drag racer.’ ”

OK, well, it’s off to Pomona for the Finals to crown our Funny Car king (and some season champions). I’ll preview the top two next Friday, with the promised quotes from Force and Austin Coil about “Jungle” and more insight from “Jungle Pam.”