A 'fiberglass forest' in Indy

It was only appropriate during this yearlong celebration of 50 Years of Funny Car that the world’s biggest and greatest drag race host the best display of vintage Funny Cars this season, and so it was that at the Chevrolet Performance U.S. Nationals, we assembled a “fiberglass forest” of eye candy for flopper fans.

Just take a look at some of the photographs I’ve gathered below from a monster display in the pits, a collection that spanned three decades of Funny Cars, from some of the earliest altered-wheelbase pieces to some iconic cars from the 1970s and 1980s. We’ve all seen photos of these in black and white, so it’s a treat to see them in living color. I’m not sure which are restorations and which are re-creations, but it’s sure cool to see them. 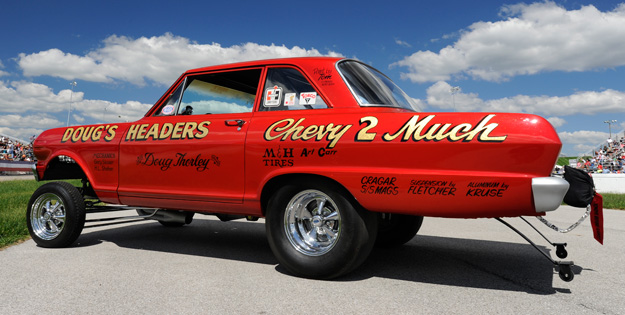 Here’s an early branch of the Funny Car family tree from 1965. Doug Thorley’s altered-wheelbase Chevy 2 Much machine, as the name suggests, was a Chevy II. Power came from an injected nitro Chevy engine tuned by Gary Slusser, who decades later would make a name for himself tuning the Joe Pisano/Mike Dunn Olds flopper. Thorley, of course, would win the first U.S. Nationals Funny Car title in his Corvair in 1967. Owner: Paul Brown 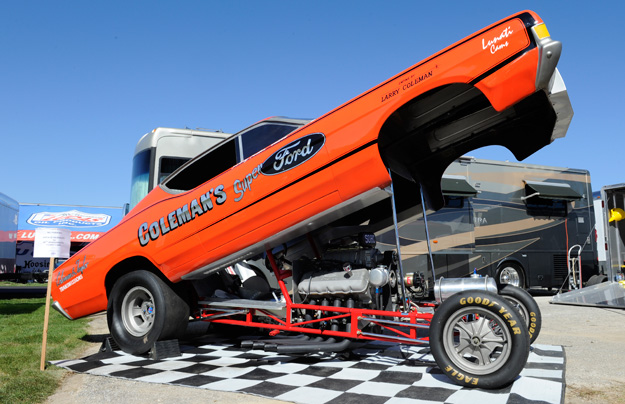 There weren’t many Ford Torino Funny Cars, but the Larry Coleman/Billy Taylor Super Ford was one of them. The ‘68 Torino, built by the Logghe brothers, was powered by a 427 SOHC powerplant and driven by Sidney Foster. The car ultimately ran low sevens at just more than 200 mph. Owner: Larry Coleman

Bruce Larson’s famed USA-1 Camaro, the follow-up to his groundbreaking Chevelle, was pure Chevy at a time when the engine still had a foothold in the class in the late 1960s, and Larson’s was among the best of the breed. 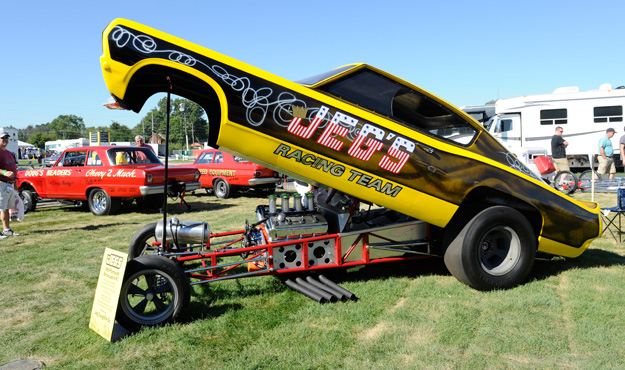 Here’s Jeg Coughlin Sr.’s injected-nitro Barracuda from 1969, and the body, I’m told, is the original one under which “the Captain” once crawled before he moved on to Top Fuel. The chassis was a Stage II Logghe model. 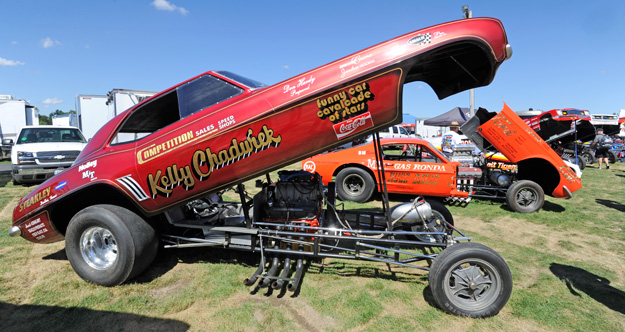 Before Warren Johnson, Kelly Chadwick was “the Professor,” and he taught a lot of lessons to his Funny Car peers with a string of quick-running Chevys such as this Camaro, which was a staple of the Coca-Cola Cavalcade of Stars circuit. In the background is Gas Ronda’s long-nose, blown 427 SOHC Ford-powered Mustang, the follow-up to his similar injected Holman & Moody Mustang built in 1966. Without a flip-top body (but, as obvious here, a flip front end), it’s a bit hard for me to call this a Funny Car because by this time the tilt-up body was the norm, but Ronda quickly joined the flip-top brigade with another Mustang a short time later. Brent Hajek now owns both. 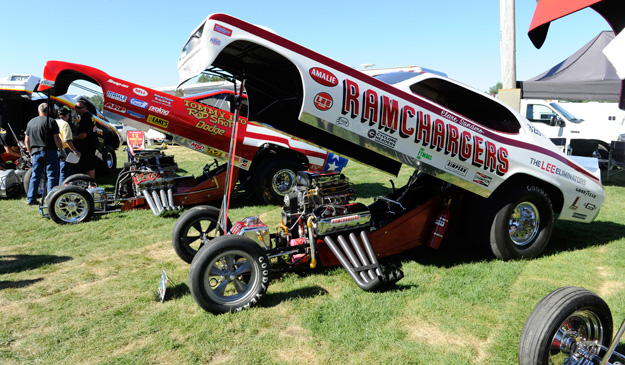 In the foreground is the 1972-73 Ramchargers Dodge Demon, which was driven by Clare Sanders, who took over for Leroy Goldstein for the candy-striped killers. Owners: Jim & Julie Matuszak. Behind that car is “TV Tommy” Ivo’s ‘76 Dodge Dart, which Tony Pedregon put together a few years ago. Owner: Jason Ailstock 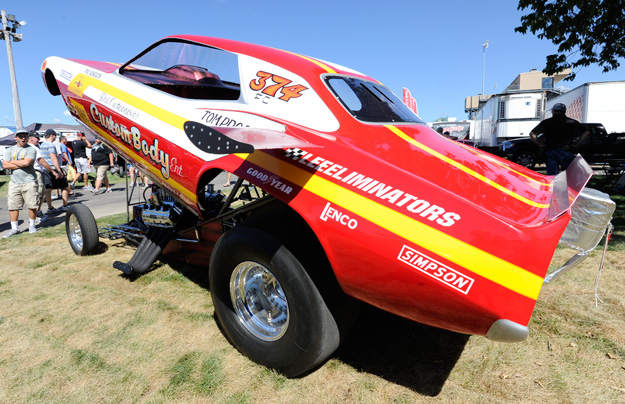 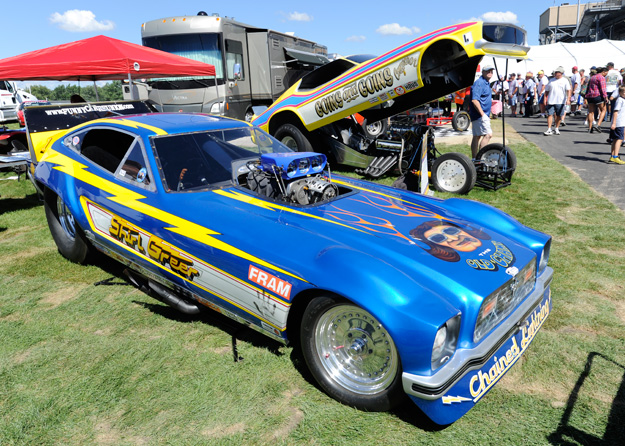 After melting his Mustang to the ground to win the 1974 NHRA Funny Car world championship, Shirl Greer had this follow-up entry, a Mustang II emblazoned with “the Old Champ’” likeness on the hood, which is owned by his son, Brian. Behind that is the Mustang of “Nitro Nellie” Goins, a pioneering African-American Funny Car racer whose career I traced in this column. Owner: Rick Lucas 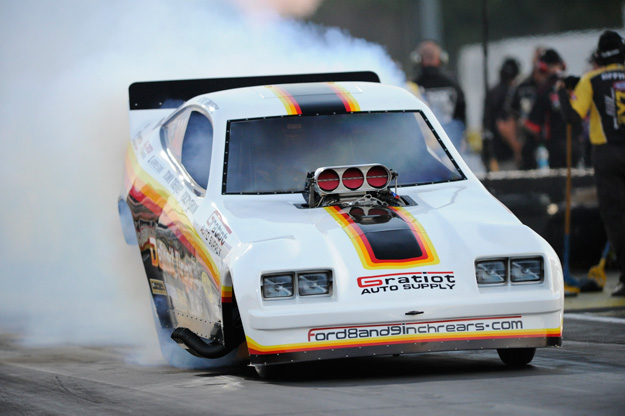 The only car of the bunch that made a pass was the re-creation of Tom Prock's Detroit Tiger Monza Funny Car with Steve Timoszyk behind the wheel for exhibition runs. The mid-1970s car even posted a period-correct 5.9-second pass after a smoky burnout and dry hops. Sweet! 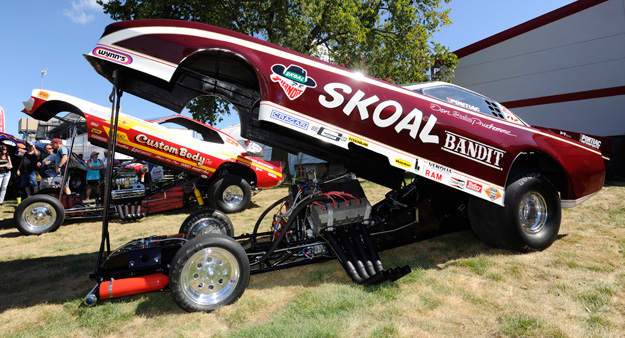 Don Prudhomme’s Skoal Bandit Trans Am left its mark on Indy in 1989, when “the Snake” won the Big Bud Shootout and the U.S. Nationals and set the national record at 5.19. Owner: Dave Harrington 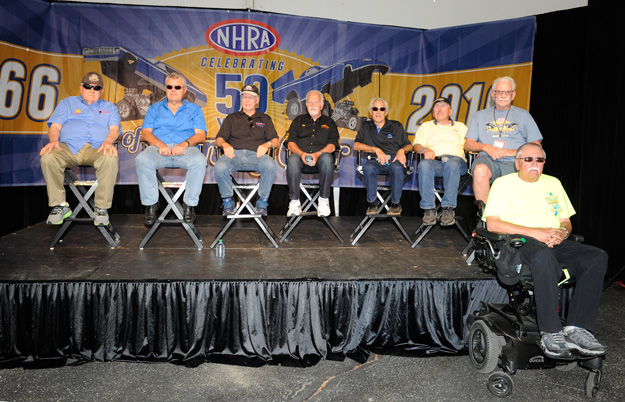 Last weekend’s unveiling of "Dyno Don" Nicholson's revolutionary flip-top '66 Comet as the No. 7 car in the top 20 Funny Cars fan poll means we’re well into the top 10.
Here’s what has been revealed so far, with a quick recap of the fan vs. Insider vote.

As you can see, there are some HUGE disparities between the fan vote and the vote from the Insider Nation, perhaps none more polarizing than Beckman's car scoring 10 places higher in the fan vote (no doubt due to differences between a general audience and the hard-core, old-school folks who read this column). Beckman will probably hate seeing that No. 20 score from the faithful here, but I know he was thrilled to be on the list anywhere, and there's no denying that the Jimmy Prock-tuned car gave Funny Car its most significant performance lift in years. We'll have to see how history treats it in the future.

The other eye-opener for me was how high the Insider legion rated the Chi-Town Hustler, the undisputed early king of the burnouts and through which many of us first became aware of Austin Coil. It was in my top 10, but not my top five. That's why I love polls.
So, what that all means is here's a look at who’s still in the hunt (no spoilers; presented in chronological order):
Don Prudhomme Hot Wheels 'Cuda (1970)
“Jungle Jim” Liberman Vega (1973)
Don Prudhomme Army Monza (1975)
Raymond Beadle Blue Max Mustang II (1975)
Dale Pulde War Eagle Trans Am (1977)
John Force Castrol Firebird (1995)
It's a good mix of cars, and I think that Dale Pulde ought to be as proud as any that the War Eagle is as well-regarded as it is among the general populace, if not the Insider voters, who had the car in the top 10 but not the top six.
Tony Pedregon, in his role as NHRA FOX analyst, also has been offering his personal top-20 list, though his criteria seem to be more personal than analytical, which makes for a cool juxtaposition with the other voting. Here are his picks so far, which, as for many of us, are very 1970s-centric:
7. "Big John" Mazmanian Barracuda ('68)
8. Tony Pedregon/Castrol/KISS Ford Mustang ('03)
9. Cruz Pedregon McDonald's Olds Cutlass ('92)
10. "Lil' John" Lombardo Mustang II ('76)
11. "TV Tommy" Ivo Nationwise Dodge ('76)
12. Bruce Larson USA-1 Camaro ('69)
13. Roland Leong/Ron Colson Hawaiian Monza ('77)
14. Joe Pisano/Tom Ridings Arrow ('78)
15. Dale Pulde War Eagle Trans Am ('77)
16. Jim Green/Richard Rogers Green Elephant Vega ('77)
17. Gordie Bonin Bubble Up Trans Am ('77)
18. Al Segrini Black Magic Vega ('74-'75)
19. Dale Armstrong/Mike Kase Speed Racer Omni ('80-'81)
20. Tom Prock Detroit Tiger Monza ('75-'76)
So we plunge into the top six next weekend, during Saturday night’s FS1 program from Charlotte. If you miss it or don’t have FS1, I’ll post it on NHRA.com Sunday morning.
Thanks for reading and contributing. I’ll see you next Friday.