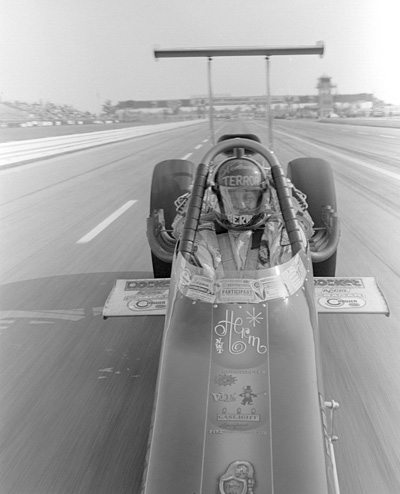 Based on feedback from last week’s column, it looks like a lot of you are on board for another ride down the in-car highway as photos and suggestions have come flowing in since the column was published.

Those of you who read the column early Friday may not have revisited it to see the note that I added to the Herm Petersen item. I had mentioned that I remembered one of the frames from the motordrive sequence shot at the 1972 U.S. Nationals appeared to show Petersen with his arms practically crossed on what I assumed was the butterfly steering wheel, perhaps attributable to the car becoming a handful at the stripe, but Herm dropped me a quick note to explain that was merely him using his right hand to reach across the cockpit to pull the parachute, whose lever was on the left side of the cockpit. That, of course, begged the obvious question on why the cockpit was set up that way.

“I always kept my left hand on the wheel,” he explained in response. “I would trip the chute with a sweeping motion and then go directly to the brake handle on the right and never had to let go of the steering wheel!” I guess that makes sense.

I asked Herm about the mount that our own Leslie Lovett had used to get the great pics, and he said that he was pretty sure that Don Long had built the tripod-style mount for Lovett out of 4130 chrome-moly tubing. All they had to do to mount the tripod was to take off the front portion of the body; two legs went on the left upper frame rail and one on the right and stood at about 3-4 feet tall. “It was a very safe mount; I was very comfortable with it,” he added. 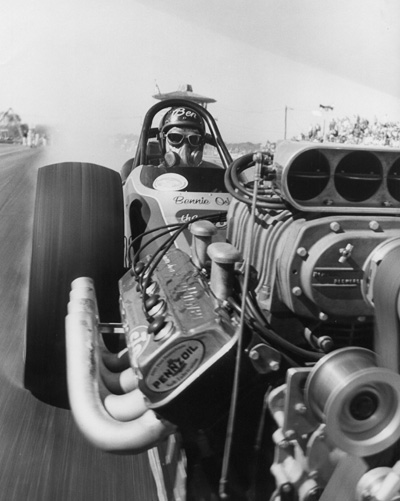 The Lovett sequence of Bennie Osborn blasting down the track at Tulsa Int’l Raceway brought back good memories from Bill McLauchlan, as the 1968 Finals was his first NHRA national event. “I remember that Lovett attached a tripod-like mechanism on the framerails (the nose piece was removed from the car for the photo shoot during qualifying),” he wrote. “I have attached a picture showing Osborn suiting up prior to the run, and you will notice the absence of the nose piece as well as one of the tripod legs; however, the camera is out of the shot. I’ve seen another picture of the car launching off the starting line, which shows a better view of the camera setup.”

It’s hard to say whether the same rig was used for both the Osborn (1968) and Petersen (1972) images, but my guess would be they’re the same. McLauchlan was also one of many who sent me other in-car shots that, as he pointed out, have become “Internet staples” that I’ll be rolling out as we go.

You’ve always read a lot of admiration from me for Lovett, who was National Dragster’s longtime photo editor from the late 1960s until his passing in 1996, so I got to work with and learn from him for 14 years, but I’m not sure that I’ve shown many photos of him. The Insider’s good pal, Steve Reyes, was happy to rectify that for us while staying on topic with this photo he took at a divisional event at Southern California’s Carlsbad Raceway in 1969, setting up the rig to shoot John Peters’ famous twin-engine Freight Train Top Gas dragster. I’ve never seen the result of these photos published anywhere, but I’ll keep my eyes open.

Reyes also passed along another photo, showing Don “the Snake” Prudhomme, at the wheel of the Shelby's Super Snake Top Fueler, carrying along a Hot Rod magazine camera at the 1968 PDA race at Orange County Int’l Raceway. The resultant image can be found in Tom Madigan’s book, Fuel & Guts: The Birth of Top Fuel Drag Racing, as well as in the gallery to the right.

Henry Timmerman, a frequent photographic contributor to National Dragster in the past, correctly pointed out that the in-car photo of Bruce Allen at Indy appeared to be still in the bleach box and not a little downtrack as I had surmised from the location of the shifter levers. “I believe back then Pro Stocks typically started their burnouts in 3rd gear,” he noted. “When I looked above the hood scoop and saw what seems to be people and the lane divider wall, it confirmed what I thought.” Good call!

Kevin Rowe sent in the photo above that shows the Des Moines, Iowa-based Rowe and Jones Top Fueler owned by his dad, Ralph, and Bobby Jones with Dave Anderson at the wheel in a photo that was taken at a Division 5 meet in Brainerd in 1971 by the staff of the Des Moines Register and Tribune. “A writer and cameraman came with us and did a big story about the team as, at that time, my dad and Earl Binns, also one of dads’ future drivers, were the only people in the state with Top Fuel cars,” he remembers. “In that photo, the motor was just letting go at the top end of first round, and we won but did not have another motor. Earl Binns, at the time, had his own car, came over, took the motor out of his car, and put it in dad’s car! How cool is that? From there, I am not sure how that race turned out.” Anderson left the team to drive the famed Pollution Packer rocket car, in which he later lost his life March 1974.

OK, that’s it for today. Next week, a look at some early attempts at in-car video.