A history of AMC Funny Cars

“If you had to compete with the three biggest car companies in America, what would you do?” This was the tagline on some American Motors television commercials back in the early 1970s, and it’s a valid question, for which AMC had some good ideas.

Strong engines like the 390 and 401 gave lots of power, and innovative (if not critically received) styling were part of the answer, but, let’s face it: It’s tough being an American Motors fan, believe me. Even though the Kenosha, Wis., car maker actually built some pretty nice (and fast) cars, it was always looking up to its “Big Three” brothers at General Motors, Ford, and Chrysler, and so were its admirers. I mean, who would rather have a ’69 AMX when they could have a Z/28 or a Shelby Mustang? Sure, those AMXs came with a pretty stout 401 powerplant but nothing like the legendary engines from Chevy and Ford, especially when it came to aftermarket add-ons.

As I mentioned last week, my first hot rod was an AMC Javelin, and before that my stepfather had a '66 Marlin, a fastback-looking thing somewhat akin to the Dodge Chargers of the era. (In what I find a very amusing corollary, AMC designer Bob Nixon described the Marlin as "like trying to build a Corvette on a Buick sedan body. It just doesn't work" and dismissed the project as an "ugly embarrassment," yet a few years later, he designed the Gremlin. Ha!)

I don’t know that many Marlins made it to the dragstrip (I know of just one, the Preston Honea-driven ’65 Marlin that ran out of Bill Kraft’s Rambler dealership in Norwalk, Calif.), but there were quite a few racers who took advantage of the racy look of the AMC Javelin/AMX. As promised last week, here’s a look at some of the other wild American Motors machinery that hit the quarter-mile in the 1970s, focusing mostly on the nitro Funny Car ranks.

American Motors was among the last of the major manufacturers to abandon the Automobile Manufacturers Association’s 1957 decree that automakers not be involved in racing nor promote racing products for their cars (leading to the brief but popular “police” line of high-performance cars). Both Ford and Chevy had jumped ship from the mandate (created in the wake of the tragic 1955 LeMans accident that killed 77 people) in the early 1960s, and AMC, battling financial problems, finally joined the race in 1966 by creating the Grant Rebel program to gain exposure, publicity, and a performance image.

An AMC 343-cid  engine was bored and stroked to 438 cubes by “Famous Amos” Saterlee and topped with a GMC 6-71 blower. Initially driven by "Banzai Bill” Hayes in June 1967, and painted red featuring a blue racing stripe with white stars, established star Hayden Proffitt soon took over the Grant Funny Car program. A new car was built in 1968 and renamed the Grant Rebel SST and painted in the new hash red, white, and blue AMC corporate racing colors.

Proffitt sold the car to Pat Johnson, and it was driven by 1970 March Meet winner Hank Clark. Clark was from Bell Gardens, Calif., and anything fast that came out of Bell Gardens in those days had a tie to the Beaver family, as apparently did Clark’s machine, but to what extent I’m not sure. It appears that they and Clark were part owners of the car that Ron Rosenberry also drove at times. I also found a listing for Illinois-based Kenny Dobson racing in Division 3 with a Grant Rebel SST Funny Car. 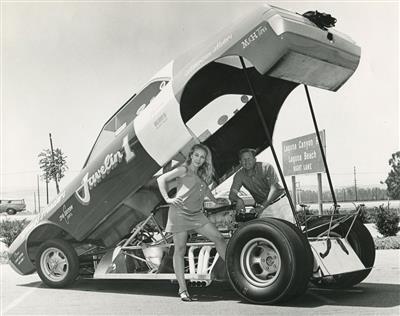 While it wasn’t the first AMC Funny Car, one of the wildest to hit the track was the mid-engine Javelin 1 built for header manufacturer Doug Thorley by Woody Gilmore in 1968. Thorley was tapped by AMC for the project thanks to the success of his 1967 Indy-winning Corvair flopper.

At the time, the AMC Funny Car body of choice was the big-bodied Rebel and no aftermarket Javelin bodies existed, but the owner of Randall Rambler, an Arizona AMC dealer, also owned a boat business and used his fiberglass experience to make the body for Javelin 1.

Reath Automotive’s Gary Slusser was tapped to work on the engine, which AMC first demanded be based on their 390 wedge, but when that engine proved underpowered, they later converted to 392 Chrysler power. A dragster-style B&M Torkmaster automatic transmission was used. 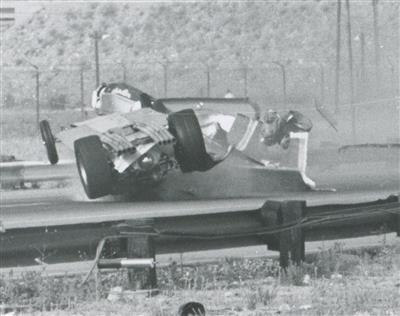 Because the engine was underpowered, Thorley had the car built super light — 1,665 pounds wet — which, combined with the unusual configuration of the rear-engine car, may have contributed to the car’s spooky handling. Thorley initially drove his car, which Norm Weekly also piloted. Jim Dunn, who was between rides then (and, of course, would go on to become a big part of rear-engine Funny Car history), reportedly nearly drove the car, but he would have had to quit his job at the fire department, so he backed out. Bob Hightower finally flipped it over backwards in the lights at Irwindale Raceway in June 1969.

Thorley’s Javelin wasn’t the only one to meet a dramatic end. Future national event winner Bob Pickett had a Javelin Funny Car in 1969-70 that eventually took flight at Orange County Int’l Raceway seriously injuring him.

Pickett built the chassis in his garage, copying the frame designed by Pat Foster for Thompson's famous Mustangs right out of a magazine article. “We knew how long the chassis was, so we copied the design right out of the magazine,” he admitted. “We chalk-lined it on the garage floor, tacked it together, then had someone else weld it up. I did all the tinwork myself. I’d never built a car before that. I was just driven.”

Pickett cloaked his new creation with an AMC Javelin body, and the car flew … literally. After racking up an eye-opening best of 7.25 at 201 mph, the car took flight in the lights May 2, 1970, at Orange County Int’l Raceway’s Big 4 race.

“They said I was dangling the front tires off the ground at 800 feet, and then right in the lights, it went straight up,” recalled Pickett, who was knocked unconscious and suffered a broken back in the wreck. “It went as high as a telephone pole and went a long way and went into the guardrail. I was just telling myself, 'It's not my time.' "

As could be expected, AMC’s sport Javelin made an attractive and swoopy race car, and fans in the late 1960s could see them throughout Southern California.

After the failure of the rear-engine car, Dick Bourgeois and Earl Wade fielded the Javelin 2 in 1969-70, a Logghe-built entry powered by a 440-cid Chevy engine tuned by Earl Wade and sponsored in part by Thorley. Bourgeois and Wade had been running Thorley's second Corvair and updated the car to this Javelin, which ran on the Coca-Cola Cavalcade of Stars circuit in 1969.

As the owner of fiberglass body manufacturer Fiberglas Trends, Marv Eldridge had his choice of bodies, and for three seasons, he ran the Javelin in a car driven quite successfully by SoCal’s Rusty Delling. The 392-powered machine scored several big wins, including the 1969 World News Nationals in Kansas City. Eldrige also had his own car, an AMX.

The Genuine Suspension AMX-1, which was owned by Jim Thomas and driven at times by Kenny DuBose, Tom Ferraro, and Gerry Walker, ran on a fuel altered chassis and powered by a 35 Chrysler Hemi. Clyde Morgan’s EXP Javelin was another Southern California machine, his built by Dick Fletcher and powered by a 427 Chevy, and future fuel dragster star Gary Read had the Nutcracker 392-powered Javelin (above).

AMCs weren’t limited to the Golden State; Texan Ken Hare had the Logghe-built 427 Chevy-powered Ramblin' Rose Javelin and Oregon’s Larry Palmer had the Can-Am Scorpion Javelin, both in 1969.

AMCs also enjoyed some time in the spotlight in Pro Stock in the mid-1970s, with Hornets driven by Wally Booth and partners Dick Maskin and Dave Kanners. As I wrote last week, Booth had the first AMC factory entry in 1972 but, after little success with a Gremlin, joined Maskin & Kanners in fielding a Hornet.

Booth earned AMC its historic first Pro win at the 1974 Gatornationals when he defeated Wayne Gapp in the final round and went on to add wins at the 1976 Springnationals, Grandnational, U.S. Nationals, Fallnationals, and World Finals en route to a third-place finish that season behind Larry Lombardo and Warren Johnson. (According to Insider regular Franklin Amiano, Booth used 392 Chrysler valve guides in his AMC engines. The stock AMC valves had 3/8 stems, but by using the 392 guides, he could run small-block Chevy valves with a 5/16 stem. They were the same length, used Chevy keepers, retainers and springs, and were an ounce lighter, which equals a pound of valvetrain weight [16 valves]).

That 1976 Finals at Ontario Motor Speedway may have been AMC’s single greatest day of drag racing as Booth defeated Kanners for the title. Kanners, the 1967 U.S. Nationals modified champ, never scored in Pro Stock but had two runner-ups, at the 1975 Gatornationals and the 1976 Finals.

AMC did score a pretty good publicity coup in the early 1970s when they wooed H.L. and Shirley Shahan to the AMC family. Shirley, of course, made NHRA history in her Drag-on Lady Mopar in 1966 when she became the first woman to win an NHRA national event (the Winternationals), but the Shahans, who raced out of the central California town of Tulare, had a flying 390-powered AMX Super Stocker in which they sometimes were able to compete in Pro Stock.

In an impressive feat, the couple actually qualified two AMXs for the 32-car Pro Stock field at the 1971 U.S. Nationals, at which more than 80 cars were entered. H.L. clocked a 9.892 for the No. 20 spot and Shirley a 10.006 for No. 31, but both lost in round one. Ironically, H.L. lost to Butch Leal, who had grown up in Pixley, not far from Tulare, and had run one of his first cars, a 409 ’62 Chevy, with Shahan’s help. Shirley lost her opening-round race to “Fast Eddie” Schartman’s Comet, and a woman would not win a round of NHRA Pro Stock competition until 21 years later, when Lucinda McFarlin became the first at the 1992 event in Memphis.

So, there you have it, a brief history of AMC cars in the NHRA Pro ranks. They had to compete with the three biggest car companies in America and did all right for themselves. Until next week, I’ll AMC-ya later.