Welcome back aboard for another column of onboard camera work. The first part of today’s column will focus on moving pictures, followed by a recap of more onboard images I’ve received.

Even though videos from in-car cameras are expected coverage from any motorsport today, there are quite a few good examples of in-car footage from back in the day, shot, of course, on film rather than recorded live to video. Perhaps the finest, in terms of quality, were shot for the 1971 film Drag Racer. Bruce Dyda clued me in to the YouTube video at right – “If you don’t think that this is the greatest, you must be dead,” he insists – that neatly compiles the film’s in-car footage shot at Irwindale Raceway.

The car is the 1970 Schultz & Glenn dragster, driven in the film by Glenn, and it’s shown – on two different runs incorporating two different angles, looking back at the driver and looking forward from just in front of the engine – as the car is push-started on the return road, makes the swing in front of Irwindale’s iconic blue-doored tower, then burns out and makes a run. The producers also shot at Lions and Orange County.

Although Steve Reyes is well noted for his still photography, he also dabbled in moving pictures in the late 1960s, strapping an 8mm camera to the roll cages of some of Northern California’s top cars. “In 1966, ’67, and '68, I mounted my 8mm movie camera on The Whiz Kids AA/FD, Don ’Mr. 223’ Cook's AA/FD, the Californian AA/FD, the Cow Palace Shell AA/FD, and ‘Fast Frank’ Bradley's AA/FD. 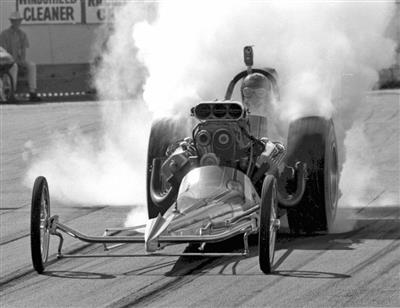 “The Whiz Kids ran off the end of Fremont and through a wood-plank fence with the camera on the front axle. No damage to car or camera, but it looks cool. The Jackson Bros. have the footage. I gave it to them to include in some of their videos. I can tell you one thing: That camera was never going to rust. Talk about oil baths. I think the racers oiled every time I mounted the camera on the roll bar.

“The coolest and scariest footage of a movie camera mounted on a car was when Rick Stewart crashed the Bay Harbor AA/FD at Lions in 1966 or ‘67. Stewart's engine failed in the lights, and you go with him on one wild crash. How the camera made it through the crash was amazing. Stewart was beat up but lived to drive again, but the car was junk, and it was a brand-new AA/FD.”

Also included in this gallery are two other images Reyes sent me, one showing “Gentleman Joe” Schubeck carrying a camera at Riverside in 1965 and one of Don Garlits at the 1970 Supernationals. The final photo, sent by Johnny Cola, shows Leland Kolb with a high-mounted camera on his four-wing dragster at the Supernationals in (I’m guessing) 1972.

Reyes also sent along the photo above, showing a filming fail at Lions. Someone set up a movie camera on the front end of the Sugar Cane AA/FD and got some rather unexpected results. “It was a nice setup, but they forgot to tape the camera shut, so when it left the starting line, the camera popped open, and the film covered the fuel tank and engine,” said Reyes. You can see the exposed film pretty clearly in this shot, trailing away from the camera at the far right of the image.

Deftly shifting a manual four-speed transmission while flying down the dragstrip may be one of the more impressive accomplishments any drag racer can do, and while early Super Stock/Pro Stock icon Ronnie Sox was dubbed “Mr. 4-Speed” for his skill at the task, his Chevy rival, Bill Jenkins, certainly knew his way around an H pattern, too.

At right is a pretty great little snippet of video that I found online showing Jenkins at work behind the wheel of his Super Stock Camaro at the 1968 Nationals in Indianapolis. If I coded the video correctly, it should start at the proper place, just before Jenkins launches on a pass down the fabled Indy quarter-mile (if it doesn’t, then just fast-forward to the 5-minute, 55-second mark, or watch the whole video; it’s really pretty great) in the first round of eliminations. Anyway, from a camera view on the floor of the passenger side, you get to see Jenkins – trademark cigar clenched firmly in his teeth – launch hard and work the shifter purposefully as he rows his way down the track. There’s more in-car footage at about the 8:45 mark from his losing semifinal race with eventual event champ “Akron Arlen” Vanke. “Grump” lost traction, and you can see him acknowledge that he knows he’s going to lose with a disappointed head shake. Great stuff!