Now that the four in a row on the NHRA Mello Yello “big show” stage is history — with a week off before the three-in-a-row Western Swing — I get a brief chance to catch my breath after a busy month. Norwalk was great fun, as it always is. It rained every day but never enough or at the “right” time to put a dent in the show, and against all forecaster odds, we got out of there on Monday.

Thursday was the Fourth of July, and we were in town a day early to save costs — it costs a ton more to fly on the Fourth than the 3rd — so we had a rare “day off” and went into Cleveland to the Rock and Roll Hall of Fame, then tried to catch a fireworks shows later that night by freeloading on the Cedar Point show from the opposite shore, but it was a bust. The Bader family fireworks show Friday night at the track was about a 100 times better, and we didn’t have to fend off dime-sized spiders (that’s a whole other story).

It’s not uncommon while I’m at the races to run into a resident of the Insider Nation — thanks to all for the appreciation; I love to hear your thoughts and ideas — but on Sunday, I got the chance to meet reader and sometime contributor Mark Whitmer, who was having a pretty good day himself. He was picked as the winner in Ford’s Mustang 5.0 Fever drawing — he entered last year at Indy — and won a sweet new Mustang (black). He got the royal treatment at the event from the Ford and Motorcraft folks, and even though the pre-race ceremony was canceled due to threatening weather, NHRA officials were able to acknowledge him as he rode down the return road in his shiny new ride with Ford Funny Car driver Bob Tasca III at the wheel before he was handed the keys.

He had sent me an email before the event asking for a meet up, and I was only too happy to help make his special day a little more special. As you can see in the photo, he was enjoying life. He also wanted to show me his pride and joy — tucked away safely in the trunk — Darrel Kimble’s cutaway drawing of Kenny Bernstein’s 1984 Budweiser King Tempo Funny Car, which dovetailed with the recent X-ray art I’ve been showing. Whitmer had gotten it from a local Ford dealership parts department, and it’s become “a family treasure.”

I didn’t get a chance to shoot a pic of it, but, coincidentally, a few days before the racer, reader Mike Currie had turned me on to his image of the same drawing (above) that’s super cool and a bit different in that, as you can see in the blowup at right, it also offers a view of inside the cylinder head — you probably can’t see it so well here in this version, but click on the photo to get a bigger view — showing parts of the valvetrain and even a piston. Pretty cool.

“I know that it came from a centerspread and that it must have been around 1984, but I'm not sure what magazine or anything else related to a possible article to go with the drawing,” he wrote. “I do remember taking a great deal of care when cutting the drawing out of the rest of the page as it has always bothered me when someone in a magazine ‘art department’ would do a hack job of trimming a subject car from the rest of a photo, resulting in a distorted image, usually around the tire/wheelwell area and corresponding shadows. I mounted my cutout cutaway to a piece of foam core and still enjoy it very much. I know David Kimble has done many other similar cutaway drawings — Corvettes, Ferraris and other types of race cars — but this is the only drag car I have ever seen done by him.”

Currie also included the image at left above, which was the cover of the September 1972 issue of Drag Racing USA, showing a huge wheelstand by “Flash Gordon” Mineo (photo by Gary Densford) and was one of a handful of images sold within each issue of DRUSA through Newport Productions, but somewhere in the production process, as you can see in the photo at right, a hand was added to the poster, flashing the ‘V for Victory’ symbol so popular then.

This, of course, was pre-PhotoShop but certainly within the skills of any capable art director but is a very curious addition. The poster version also is cropped more loosely and reveals the venue to be Orange County Int’l Raceway, but I also saw something that Currie didn’t (or at least that he didn’t mention): a considerable amount of smoke seems to have been added surrounding the rear tires for the magazine cover. And it’s clear from visual background references that the car hasn’t moved yet the smoke in the cover photo looks so real. Hmmmmm.

So, this whole thing got the ol’ brain whirring (a dangerous thing, as you all know), and I dug a bit deeper into the story. According to our good pal Steve Reyes (two of whose photos were among those sold by Newport), Newport Productions was owned by — guess who? — Gary Densford.

And I hate to burst anyone’s bubble  — especially mine! — but it turns out that the entire photo is a fake. (then again, that’s why you come here, right, for “the stories behind the stories?”)

According to Reyes, “Mineo and Densford propped up an engineless Funny Car with taped-on headers. A hose was run into the exhaust pipe of a piece of junk car that Densford drove to the shoot. With the car running, Gary had Ann Mineo pour oil into the carb, producing billows of smoke. Gary hits the shutter on his camera as the oil smoke covers the starting line. Gary got his photo and cover, and Mineo got a cover without firing or having an engine in his car.”

So, obviously, the extra smoke in the cover version is from an alternate take with the immobile car. Awesome. The arm in the window is either Mineo's after he climbed up into the car or a fake arm (maybe Willie Borsch's arm, no?)

Reyes also offered some behind-the-scenes commentary on the cover image from that final issue of Drag Racing USA, as he was (big surprise) in on the shoot.

“It took place about a mile from where I was living in Playa Del Rey,” he recalled. “Jeff Tinsley was staying with me and needed a place to shoot his cover of Dennis Fowler’s AA/FC, so I took him over the hill in Playa Del Rey where all the houses were torn down. Playa Del Rey had about half of the city torn down because it was on the landing path of LAX. All the streets were there and light fixtures with sidewalks, just no houses. And yes, it was kinda fenced off from the public — at least most of it.

"We found a large fence opening and pushed the Funny Car in and waited for the sun to set. Tinsley then started to rapid fire his Nikon. He got his cover in about 20 minutes, and we got the heck outta Dodge. They did have an airport police patrol car come by after we had finished, but since we were on the correct side of the fence, they couldn’t do anything — another fun photo shoot.”

Having grown up in that area, I'm very familiar with the place Reyes is talking about. It was definitely an eerie place, something right out of The Twilight Zone, and a place where some young, car-crazy, would-be filmmaker and aspiring journalist I know might have — and I stress might have — found the urge to get together with some of his hypothetical friends to film some questionable automotive acrobatics on a "closed course," as the commercials say. Alas, had this happened it would have been shot on Super 8 movie film in the pre-YouTube days but since converted to DVD for use as a purely instructional video for the next generation to learn from my his misdeeds. Hypothetically, of course.

One of my Norwalk disappointments was a missed connection with Frank Mazi, the genius (?) behind the idea to let me drive his short-wheelbased supercharged Opel way back in 1984 for a story that still gets mentioned almost every time my name does. He was only at the track on Saturday, and, due largely in part of the poor cellphone reception at the track, we traded missed phone calls and never met up.

As I wrote two weeks ago, Mazi is finally back behind the wheel of a race car, Rudy Tomsich's Expensive Noise Arias Hemi-head Chevrolet-powered A/Fuel Dragster, and made his first run, a half-track shutoff pass, in Thompson, Ohio, last Wednesday. Daughter Dawn and her husband, Mark Hovsepian, naturally were on hand to capture the great (and somewhat emotional first pass) with their video cameras, including an onboard view, as you can see here.

“It was thrilling to experience a Mazi-controlled throttle once again,” Mark wrote me, “and an amazing and stark contrast from the Opel. Long wheelbase vs. short, injected vs. blown, nitro vs. gas, digger vs. door car, etc. He was 'Prudhomme cool’ through the day.”

He looks right at home in this video, even though he did tell me — on a short phone call once we did catch up — that Dawn’s editing made him look better than he was. 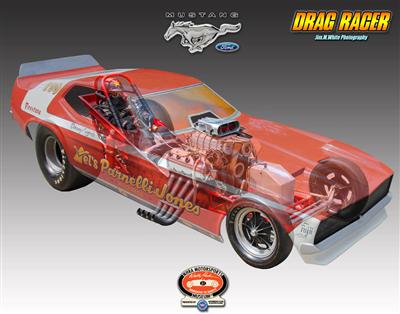 And finally, check out these photos sent to me by photographer Jim White of the Vel’s/Parnelli Jones Mustang Funny Car that’s currently housed at the Wally Parks NHRA Motorsports Museum presented by AAA. White shot the car last week for an upcoming article in Drag Racer magazine on cars of the NHRA Museum and, noting the recent thread here, included an X-ray version for our enjoyment.

“We took the body off for the first time since the '70s; the car is completely untouched, even the inspection tags said 1975 on them and also a lot of fire damage, too,” he said. “They just parked the car. My buddy Cory Lee and my artist bud Dave Peters were there in 102-degree heat to be stuck in the car, and we even did a fantasy shot of the old girl running again." 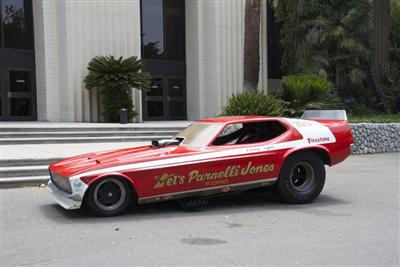 “The whole point in doing this was to promote the museum and the cars in it through the magazine and tell the story of the cars and people who drove them," White added. "Because this car has such a history not only as Danny Ongias’ last ride but also as the last Mazmanian Funny Car, I chose this one first. We are going to do Mike Mitchell's 'Vette Gasser next.”

Great stuff, Jim, thanks for thinking of us. I’m sure the readers here will really dig the photos and the feature once it hits print.

That’s it for this installment; thanks for reading and, as always, for your contributions.