Although the Mayans were wrong and the world didn’t end on Dec. 21, the road did end for a number of our friends since I last wrote a column here before the Christmas break, so before we move further into 2013, I’d like to acknowledge those we lost during the holidays.

Obviously, the biggest shock to the system for someone like me who has been a part of the NHRA family for more than 30 years was the loss of Dale Ham, NHRA’s longtime former Division 4 director. We lost “the Hammer” Dec. 23, and though I can’t say it was unexpected, it nonetheless was painful to lose another of the old guard upon whose sweat and hard work the NHRA was founded.

Ham was named a regional adviser in the South Central region in 1954 and then Division 4 director by NHRA founder Wally Parks in 1961 and stayed at that post until the end of 1986. He was one of the original division directors whose name and reputation is well-cemented in the NHRA annals. When I look back at all of those early DDs whom we have lost, it’s truly heartsickening – guys like Buster Couch, Bob Daniels, and Bernie Partridge, and, of course, irreplaceable characters like Parks, Bill “Farmer” Dismuke, Jack Hart, and others who helped forge the path.

Ham was the personification of the Division 4 motto: The Good Guys. Glenn Menard, longtime Division 4 track operator and announcer and one of the many people taken under Ham’s wing, wrote to me, saying, “He was THE major force in D-4 and in many of our racing lives. I remember going back to their motel room after a points race as a college student to write in the winners names on the DRAGSTER sheets, placing the roll of undeveloped film into an envelope, then going to the post office with Dale to put it into whatever ‘express’ mail there was in the late ‘60s so that the results would make it to the paper. Then he drove me home (no car). How times have changed.”

Longtime NHRA Competition Director Steve Gibbs added, “Division 4 was referred to as The Land of the Good Guys, and Dale was truly the gang leader, the best of the good guys. Much could be written about his contributions to drag racing, his amazing family, his accomplishments in the world of Native American art, and how to have a damn good time.”

Longtime drag racing photographer and chronicler Forrest Bond added, “Dale signed my first NHRA press pass, in May of '65, and it's framed with a handful of other passes that still hold special significance for me. I was 21, green as could be, and I'll never forget how much he helped me get up to speed and how generous he was with his time, which was always in demand. Dale was just a great guy to know, the racing aside, and with respect to doing the business, the epitome of a division director. Most of all, I always thought Dale was incredibly fair and balanced in dealing with the inevitable contentious situations and always the voice of calm and reason, though one needed to be careful not to push him too far.”

Longtime Division 4 campaigner Bob Gibson added, "Dale Ham was a friend to all racers and fans, and for sure, he could be a hard-ass to a racer that didn't want to follow the rules. He would take the time to visit with you regardless if you were a famous racer or a nobody. He was free with his good advice. His advice and encouragement helped me get involved in drag racing in the mid-'60s when we were just wild teens that loved drag racing. I always thought Division 4 was known as The Land of the Good Guys because of Dale's character and leadership. After we won the Springnationals in '70, he and [wife] Glynanna made a point to come to our celebration party and even brought a bottle of booze for the bar. How's that for supporting the Division 4 racers? Something he didn't have to do but wanted to share the enthusiasm."

Ham’s passing comes less than two years after the love of his life, the effervescent and charming Glynanna, passed away in April 2011. Ham, who had been in hospice care since September, suffered a heart attack about a week before his passing and died as a result of complications from the attack, according to Beth Ham, wife of Ham’s son, Brad, and a physician herself, who chronicled his past few years for me and his declining health after the passing of his wife.

“We thought he would last about six days, but he lasted 20 months,” she wrote. “You may remember, 22 years ago, he had a massive heart attack and lived through that one! After that, he really did change his lifestyle dramatically and got another 22 years! After Glynanna died, he really just wanted to go be with her. There were personal reasons for wanting to hang on as long as he did, but once he got things straightened out, he went with hospice.”

At Ham’s request, there was no service, and his and Glynanna’s ashes were spread together above Red River, where they dated as teenagers. 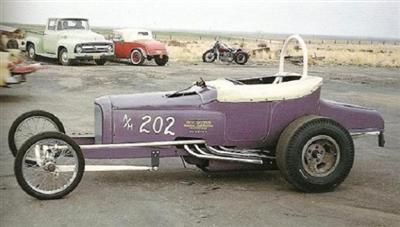 Another pretty major passing was the death of Tony Waters, who died Dec. 22 at age 85 after an extended illness. Waters, who drove fuel-burning altereds and dragsters throughout the 1950s and 1960s, was most famously runner-up to Art Chrisman at the first U.S. Fuel and Gas Championships in Bakersfield in 1959. In that historic final, Waters -- driving the Waters-Sughrue-Guinn A/FMR – got out on Chrisman (who was wheeling the Chrisman Bros. & Cannon dragster) but got loose farther downtrack, allowing Chrisman to blast by for the 9.36, 140.50-mph final-round win. Waters was an original member of the Smokers Car Club that staged the event. Waters, who also drove the roadster on dry lake beds, had remained active in the sport and most recently was the owner and tuner of a nostalgia A/Fuel Dragster driven by his son, Darrell, in NHRA’s Hot Rod Heritage Racing Series. 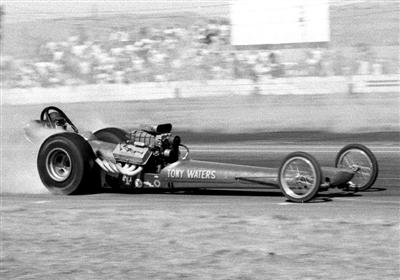 In an article on the Bakersfield.com site titled “Famoso, Hot Rods and Hot Potatoes,” author George Gilbert Lynch reported that Waters won the Smokers first big event, in 1954. “The Smokers membership voted to incorporate their Club, then presented their first Famoso two-day meet in March 1954. It was touted as ‘The West Coast Championships.’ Eight to ten thousand fans attended the big meet, and most of the fastest cars on the Pacific Coast were competing. After this race, the Smokers Inc. realized they had become ‘THE drag strip of the West Coast.’ Tony Waters of the Smokers Club was the top eliminator of that show. Waters, in his six-cylinder GMC track roadster, ran against ‘Jazzy’ Nelson, driving a nitro-fueled flathead Ford; winning speed was 127 mph. Tony Waters removed all doubt he was West Coast champion by winning the next five monthly Famoso Drags with his consistent and reliable GMC roadster.”

After he left the cockpit, he had a number of quality cars driven by others, including John Edminds and Butch Maas, as can be seen in the mini gallery of photos generously sent by Steve Reyes.

We also lost jet-car pioneer Theodore "Teddy" Austin, who died Dec. 27 at age 74 at his home in Lenoir City, Tenn. Austin, a U.S. Navy veteran, is best remembered as a driver for Walt and Art Arfons, for whom he wheeled the jet-powered Cyclone Mercury Comet and the final entry in the line of famed Green Monster dragsters in the late 1960s and early 1970s. After his retirement from racing, he owned his own alignment shop, worked with cutting horses on a ranch in Texas, and drove 18-wheelers across the country. He is survived by his longtime companion, Mary Williams; son Teddy; grandson Harley Austin; "daughter" Kristi Sherrod; and many grandchildren and great-grandchildren. Thanks to Dennis Warren for getting me the info and the photos at right.

The sport also lost Roy Steen Dec. 28. He was best known as chassis builder partner with Frank Huszar at their fabled Southern California Race Car Specialties shop – both were members of the famed Throttle Merchants car club -- but also was involved significantly on a number of cars, most notably with Chet Herbert, including on a twin nitro-burning injected F-85 Olds-powered dragster driven by Jeep Hampshire and the "Herbertliner" land-speed car.

Mike Golightly contacted me to let us know about the passing of his father, Roy, a pioneer in Colorado drag racing from the mid-1950s, on Dec. 13, the result of advanced Alzheimer's disease. He was 84. Golightly laid claim to having the first dragster in Colorado to reach 160 mph in 1955 with a car that he built himself. He was a charter member of The Strippers, a Denver-based car club. He retired from racing in 1965 and was inducted into the Colorado Drag Racing Hall of Fame in 2004. The U.S. Army veteran of the Korean conflict is survived by his wife of 39 years, Lucille; his son; stepdaughter and son-in-law, Carol and Michael Jess; and stepgrandson, Adam Jess. The family requested that in lieu of flowers, memorials be made to the Alzheimer's Association-Great Plains Chapter.

On the other side of the racing spectrum, we also lost Aaron Green, a promising announcer and racer from the Division 2 area. I met Aaron on the job here in the early 1980s, and we stayed in contact for some time about this, that, and the other thing. A family tragedy a number of years ago sent ripples through his life, and he had been ailing for some time before we lost him on Christmas Eve.

So, as you can see, it was a rough December for the history of our sport. It wasn’t my desire to begin the new year with this type of entry, but I wanted to pay respects to those we lost and not let their accomplishments and contributions be forgotten.

I’ll see you next week.