It was more than two years between Shelly Anderson’s blowover at the 1996 Brainerd event and the next one to befall a racer, but Pat Dakin won’t soon forget when his number came up in Topeka in the fall of 1998. Racing Doug Kalitta in round one, Dakin’s mount reached for the sky, flipped overbackward, and glanced off the top of the guardwall and slid to a stop, right-side up, in the shutdown area.

“That car has never wheelstood in its life, so that was the last thing on my mind,” Dakin told me via email this week. “It went into tire shake and I pedaled, and the next thing I knew, I was in trouble. The first thing I thought of was, ‘How quick can we get the backup car ready?’ This was while the car was going over. That is all I remember until going to the helicopter on a stretcher. I woke, and the medic asked if I could move my legs and did, so no paralysis; that was good, but I broke all but three fingers on both hands and fractured my skull. It took 18 months and 12 operations before I regained all of the use of my left hand and most of my right, which did not help my golf game.”

Dakin’s crash ended a promising season; the two-time winner from the 1970s had reached the final round earlier that year in Atlanta. As serious as Dakin’s injuries were, 20 years later, he returned to the sport and the class he loved so much, relicensing after the 2008 Gatornationals, and today is a semi-regular presence on the tour.

The following year, former Top Alcohol Dragster racer Randy Parks joined the Quarter-Mile-High Club, turning his Fluke/Rydin Decal-sponsored dragster over during Friday qualifying at the 1999 Phoenix event. Parks’ car started to climb at about the 200-foot mark, went straight up at half-track, then spun around in midair and landed on all fours facing backward on the track before sliding across the finish line on an 8.46, 62.14-mph pass and grinding to a safe halt, but the team’s 35-run-old Murf McKinney-built car was a mess.

Ironically, that was the team’s first pass without a wheelie bar, which had been removed in an attempt to improve the car’s performance after a DNQ at the season-opening Winternationals. The car weighed a portly 2,215 pounds, and removing the 30-pound wheelie bar was a bid to mitigate that weight, albeit one that went disastrously wrong. Crew chief John Smith and the crew, however, thrashed all night to put their undamaged powertrain into their backup car (Gary Scelzi’s 1997 championship-winning Brad Hadman car). Their first run Saturday resulted in another disaster as two dropped cylinders led to an engine hydraulic so severe that it damaged the left framerail. Fortunately for them, Hadman was on the grounds and repaired the damage in time for the final session, but they spun the tires, leaving them outside of the field. 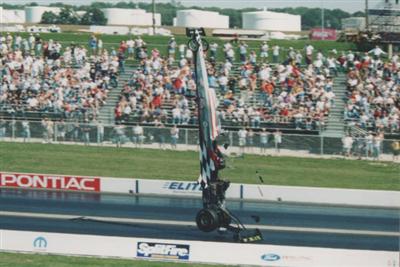 Vandergriff’s car headed skyward at half-track, flipped, and initially landed flat on all fours but got on its side as it slid downtrack. The rear tires eventually contacted the guardwall, and the car then tumbled, barrel-rolling down the track in the shutdown area. What’s pretty clear in this fan-shot video is the effect of the air on the car; you can hear his lift and see the car just float along for quite some distance, teetering on the precipice of a blowover before finally tipping over.

This video contains the full blowover and concludes with footage of the wrecked car being returned to Vandergriff’s pit area, bent and mangled, and with the roll cage missing, having been cut off by the NHRA Safety Safari when he was extricated.

In an interview a year later with Competition Plus, Vandergriff said that, after much consultation with a lot of experts and crew chiefs, the car probably had been set up in a way not favorable to such an inexperienced driver as himself.

Two years later, all the experience in the world didn’t help Clay Millican as the IHRA hitter flipped his dragster at the July 2005 event in Milan, Mich. Interestingly, Millican’s car was bannering the Dukes of Hazzard film, and he made like the ol’ General Lee in getting airborne.

"We did a one-race deal with Warner Bros. promoting the release of the movie, and strangely enough, when I crashed the car, it happened to be orange with an 01 on it, so it was very ironic,” he admitted.

Racing against perennial rival Bruce Litton, Millican ran into tire shake and pedaled the throttle, but the car hooked hard, and the nose climbed. Millican took the blame for staying in it because he was ahead of Litton, telling himself, “You’re a macho guy; you can handle this.” The car went up and over and landed completely upside down, cushioned by the rear wing, which folded neatly yet slowly under the weight.

Millican was unhurt in the crash, as was the chassis. "We lost the body, the rear wing stand, and that was it," he said. "We did have it fronthalved before the next race. We had Brad Hadman come in, and after he looked at it, he said, 'Why am I here? The car’s not hurt.' "

Thankfully, there hasn’t been a Top Fuel blowover in the seven years since, and I asked Millican for his opinion on that matter.

“I think part of the reason we haven’t seen any lately is that wheelie bars are now mandatory, and we have a different rear tire than we used then," he said. "Will it happen again? It will if a driver makes an error like I did that day.”