In the last two weeks, in addition to the normal writing that the National DRAGSTER editorial staff has been doing – Sportsman stories from Phoenix, previews for the Tire Kingdom NHRA Gatornationals presented by NAPAFilters.com, points meets, etc. – we’ve been concurrently working on stories for this year’s Readers Choice issue, which ships Wednesday.

Readers Choice is always one of the most popular and highly anticipated issues of the season – both for our readers and the staff – because we devote almost the entire issue to fulfilling those dream stories that our subscribers have always wanted to read. We usually choose just six to seven stories because the research and legwork is pretty intensive since they almost always are of a nostalgic theme.

This year marks our 20th anniversary of this annual feature, and we’ll be presenting 10 – count 'em, 10! – articles this year, with each staff writer tackling two. The subjects again are largely of a nostalgic nature – great news to those who follow (and write) this column – and cover a wide range of topics. We’ll have the history of Top Fuel Bikes and station wagons in drag racing, features on gasser hero Chuck Finders, drag racing painter/illustrator Kenny Youngblood, and women of the 1960s, and a detailed map of Southern California in the 1960s, pinpointing the locations of the various shops, manufacturers, and racetracks of that era. On a more contemporary level, we’ll take a look at the hotbed of Top Alcohol Funny Car racing that has always been New England and chronicle the efforts of the Top Fool Alcohol Crew, which each year in Indy creates a themed float that is enjoyed and admired by fans and racers alike.

I jumped on a pair of other nostalgia-themed stories, the first being a detailed look at life on the road for the touring match racers of the 1970s and the second focused on Lions Drag Strip’s Last Drag Race.

Those of you who have followed this column for years know that I covered the Last Drag Race a few years ago as part of a  follow-up to a feature I wrote on Top Fuel racer Don Moody, so I drew from those notes, which also included an interview with Top Fuel winner Carl Olson, but decided to go it much further with interviews with Funny Car winner (and hometown hero) Tom McEwen, Lions starter Larry Sutton, and Don Gillespie, who not long ago produced an epic three-DVD history of the track.

My story not only covers the raucous Last Drag Race, but also the circumstances that led to that fateful December 1972 evening. The night itself is well-chronicled (including Sutton’s infamous “last pass” down the track in a wooden outhouse). Gillespie and Steve Reyes also were kind enough to supply a ton of photos from that evening. I ended up with a well-rounded story that I hope goes a long way toward explaining why Lions was so special in the eyes of so many.

While I had McEwen on the line, I interviewed him for the road story, getting his recollections of not just his Hot Wheels tours with Don “the Snake” Prudhomme but of his years before that with his dragster. Most people know that when you get “the ‘Goose” going, he can go on for a long time, and our chat at times meandered from the main topics as he went through his amazing history, tidbits that didn’t make it to the stories but deserve to be told.

“One thing I remember about [Lions manager] Mickey Thompson was that every night, he’d get into an argument with a racer about the rules, and they’d want to fight,” recalled McEwen, who began racing at the track when it opened in 1955. “He would tell them, ‘I’m working right now, but see that field over there? I’ll meet you over there at 10 o’clock.’ Hell, there’d be six or seven guys over there waiting."

“He did very well,” said McEwen.

McEwen also talked a lot about how those early days were about experimentation and how safety was learned on the fly, at great expense.

“We learned the hard way on everything -- fires, parachutes, clutches – from people getting hurt,” he said sadly. “In the beginning, we wore leather because we didn’t know any better and because that was what the motorcycle guys all used, but leather is probably the worst thing you could have; it would just melt to your skin. I saw it happen. Then Simpson and Deist started making the Nomex suits.”

McEwen also shared the story of how he developed the now-iconic breather masks with the screw-in filters that were worn for years with open-face helmets as fire protectant and, just as important, a protection against fumes, the latter a need that arose when zoomie headers replaced the down-and-out-pointing “weedburner” headers.

“Frank Cannon had a guy from Rocketdyne come out to Lions one time who was a thrust engineer,” he recalled. “He looked at our weedburners and thought we were wasting thrust because he figured we had about 50 pounds of thrust out of each pipe. He said, ‘You ought to make some headers that go up for down pressure and back for forward thrust.’ But once we bolted them on the cars, you couldn’t breathe because of the fumes. I went down to a paint shop and bought a painter’s mask and took it right over to [Bill] Simpson's garage. He was a one-man show then with one sewing machine in his garage in Torrance [Calif.], and I had him sew that paint mask into something that you could put on under your helmet. It got real popular.”

I also interviewed Prudhomme, Roland Leong, and Ed “the Ace” McCulloch for the touring feature and gained a new admiration for the hard work that went into making their appointed rounds. They all shared great and funny stories of trips gone wrong, stingy (and pistol-packing) promoters who haggled over their appearance money, rowdy fans who wagered in the stands and demanded explanations for their losses, and so much more.

Half of the fun of these stories is interviewing the drivers, and half the challenge is getting them to say what you’re hoping they’ll say, and every time one of them said, "Well, here’s a story about that," or "Let me tell you about this one time," man, my ears were open as wide as my grin. Even though I know they’ve probably told these stories many, many times, they all enthusiastically answered my questions and shared as if it were the first time, and I appreciate that.

I had grand visions of also interviewing Tommy Ivo and Don Schumacher for the touring story, but because both are tough to reach sometimes – Schumacher obviously has a full plate with his race teams, and Ivo doesn’t get up until 4 p.m. each day – I ran out of time and space after hours of transcribing the interviews I did complete, but there’s always another column and another story coming down the road, and I’d love to be the guy to tell it.

McEwen joked with me about a recent gathering at Prudhomme’s house, where he, Prudhomme, legendary promoter/track operator Bill Doner, Billy Bones, Tom Prock, and others sat around swapping war stories about life on the road and about “the dark side” of those adventures – stories not fit for a family column such as this – and how someone (me?) ought to write a book on that, but all agreed that, to protect the not-so innocent (which, of course, included none of those present), they'd have to “wait for a few more wives to die first.” 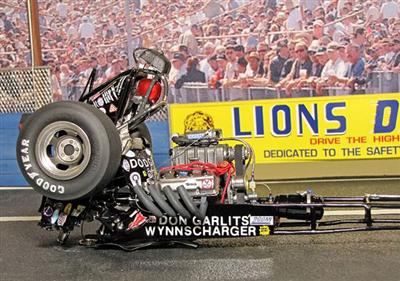 While I was researching the Lions story and looking for images I might not have previously seen, I came across a message board with an incredible diorama of Don Garlits’ famous 1970 transmission explosion at “the Beach.” Built by avid Southern California modeler John Teresi, it shows the moment of disaster for Garlits as featured in several famous photos of the incident that paved the way for Garlits’ successful rear-engine dragster.

According to Teresi, he made the 1/16-scale diorama in 2008 to share his love of Lions. He started with a Revell Garlits rear-engine kit as a donor and added Garlits in the driver’s seat. Then, using the famous black and white photos for reference, he scratch-built the body panels using aluminum sheets, then wired and plumbed the engine. He added the famous Lions wall-of-people background, and, as you can see in the sequence in the gallery at right, he also added a small smoke pot under the explosion point for increased realism. Amazing work.