I'm such a T's: Traxxas, Tripp. and Tributes

I hope you all had a wonderful Thanksgiving and got to spend time with your loved ones to share your thankfulness. My folks – both of them big racing fans -- drove down from Oregon, and after a couple of days of sightseeing, we met up with the rest of the family – also rabid race fans – and spent last Saturday oohing and ahhing about the season ahead while they worked me for the latest gossip. I had known about the whole Kalitta Funny Car deal for some time and had gotten wind of the Massey situation yet managed to keep most of it under wraps until it was announced earlier this week, but it was fun to tease them with what I was holding close to the vest.

Anyway, we’re back in action to finish the publishing season for National DRAGSTER with all of the annual year-end goodies and stories. We spent part of Monday at Auto Club Raceway at Pomona driving Funny Cars – OK, Traxxas radio-controlled Funny Cars – for a feature story for ND. We tried unsuccessfully to get them to go straight on the rubbery yet slick surface that made them more closely resemble fuel altereds than Funny Cars, and by the time we transferred the action to the more grippy – yet bumpy – staging lanes, they had plenty of “Pomona stripes” on their bodies.

They’re incredible little machines with multiple adjustments beneath their tilt-up bodies, and we barely got a chance to explore the wonders in the time available. We also had at our disposal the Traxxas DTS-1 timing system that allowed us to set up a scale dragstrip complete with Christmas Tree, timing lights, and more. I gotta say that if you’re looking for the ultimate Christmas present for the race fan in your life, you need to look into them. Look for my story in the year-end issue of ND.

OK, on with column business. I was delighted not only that still more memories of Tripp Shumake rolled in, but also that a couple came from those closest to him.

Daughter Heather tells me that she has been inspired to write a book about her father that will include contributions from many of those who knew him. I’ll keep you up to date as that project progresses. I also delivered to her a nice surprise from Insider regular Jim Hill, who was at Crane Cams during the days of the 250-mph Club of which Shumake was a member. For one reason or another, Hill never could track down Shumake to present him with his club jacket and incredibly has hung onto it for the last 30-plus years, and he will be sending it to Shumake’s surprised daughter. 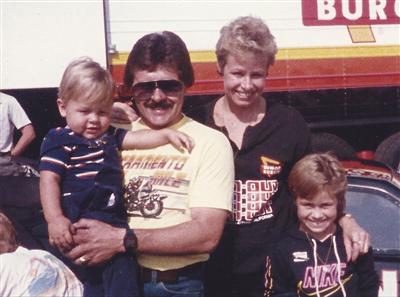 Heather may have to fight her brother, Travis, for it, though – even though it might not fit him -- as he good-naturedly weighed in recently. “Don’t let Heather fool you: Drag racing is a HUGE part of my life even though I didn’t make it in any of the winner's circle pictures as a child like she did,” he wrote. “I spent 15 years of my life in the pits and the tower at Firebird as the proud son of nice guy Tripp Shumake. I will share that one of my last memories of my dad was sitting in Paula Martin’s Funny Car in our garage; they were dating for the last three years of his life. I would put on his old Chief Auto Parts helmet, strap in, and he would lower the body. We would go through the motions of what to expect someday when I was a Funny Car pilot. He would stage me, pound the hood, and I’d open up the fuel pumps. He would sometimes go to the back and shake the body to simulate tire shake so I could practice pedaling. I was an expert at escaping out the roof hatch in a fire and even practiced a few celebratory dances on top for when I won the U.S. Nationals.

“When you lose someone at a young age, they say you forget all the bad things and remember only the good. I’ve believed for 13 years that there was no bad side to my dad, and this article and responses assure me that the image I keep of my dad is true. I wear his 250-mph ring on special occasions, and if I wasn’t 6-foot-4, I’d wear his many jackets and T-shirts on the weekend.”

Speaking of Paula Martin, the female Funny Car sensation from Arizona, I also heard from her via Facebook, and she shared memories of the man with whom she shared her life in his final years.

“I recently read the blog on Tripp,” she wrote. “Thank you for doing it. He and I lived together the last three years of his life, and he was the REAL deal. I never heard him speak badly of anyone. He was always willing to help people, and he walked the talk of the religion he practiced. He always had an easy smile, and he loved playing practical jokes. He loved his kids, and he loved racing everything. He had been over at Irwindale the Wednesday before he was killed, getting his NASCAR truck license. And, wow, did he love riding his Harley. About a year before his death, in one of those somber discussions that couples have at times, I asked him, if he had a choice, what he would want to be doing in the last moment of his life, and he responded, driving a race car or riding his motorcycle. The man that killed Tripp stated in court that he did not even remember the incident, and so it is difficult to say whether he ever felt really remorseful about the accident or not; but I do know that Tripp would have forgiven him for doing it anyway because that was the kind of man he was. The world truly is a lesser place without him.”

David Allgeier was another of Shumake’s many fans and enjoyed a fun give-and-take throughout the years. “Tripp and I were about the same size physically, and I naturally gravitated to him,” he wrote. “As has been said, he was warm, friendly, imminently patient, and funny. I forget the year and which race it was at OCIR, but I stopped by his pit, and, recognizing me from past visits, he came over for a bit. After shaking hands, I asked him who the No. 1 qualifier was. He replied, ‘That guy with the red, white, and blue car.’ [Don] Prudhomme. I don't remember where Tripp qualified, but I do remember his analysis of the qualifying pass: ‘It didn't hit the right guardrail; it didn't hit the left guardrail. I'm thinkin' to myself -- this is a pretty good pass.’ A great guy taking time out to chat with an ordinary fan and bringing with him the real flavor of drag racing. Sorely missed. Never forgotten.”

Nunzio Valerie Jr. got to know Shumake through his father while Tripp while working at Lou Patane's Dodge dealership near Phoenix. “They both helped Lou with the Top Fuel car he ran for a while; I believe Tripp made a few passes in it,” he said. “I lived out there in '95-97 and got to know Tripp myself. He wasn't a big guy, but the fact that he was an accomplished nitro racer who had set records, won races, drove for many owners, and survived several fires and crashes made him seem larger than life to me when I first met him. He always worked the tower at Firebird during the national event there, and I remember one year walking through the pits with him. We couldn't go 12 feet without a fuel racer pulling him into their pit to catch up. Everybody loved that guy, and I'll never forget learning about his passing while watching the races on TV, and I believe Joe Amato brought it up. It was a horrible shock. One thing many people probably don't know about Tripp is that before he passed, he had become an accomplished shifter kart racer; I believe he won a pretty big championship in Arizona. He routinely beat guys half his age, and his kart hit 100-plus mph on the straights! Definitely one of the good guys, and I'm glad I was able to get to know him.”

It has been a sad couple of weeks with some notable passings. Former Top Fuel racer Larry “Shorty” Leventon died Nov. 18. Leventon began his career in drag racing in the early 1960s as a driver for many Northern California-based owners and eventually campaigned his own car. Also just got word that former Funny Car driver Danny Miller died Sept. 25 after a long illness. Miller began racing in Funny Car in the late 1960s, first in an ex-Ramchargers Dart and through the early 1970s with his own line of Plastic Fantastic entries. He later founded Danny Miller’s Rear Gears, specializing in 9-inch Fords, and not long ago began competing on the nostalgia Funny Car circuit with his Rear Gears Maverick.

Just yesterday, we learned that longtime nitro wrench Dana Kimmel had passed away Tuesday night, at the too-young age of 54. Kimmel, who generously contributed to conversations in this column, was well-known and respected in the nitro community for his work with superstars such as Jerry “the King” Ruth, Shirley Muldowney, Don Prudhomme, Gary Ormsby, Pat Austin, and a host of others.

Ruth was the first to break the news to us, and, like many who knew him, he was stunned and saddened by his death.

“Dana worked for me for over 10 years,” he said. “He was extremely talented, very intelligent, one of my prized crewmembers. Dana could have had a career as a crew chief; he was that good. He chose to raise his family first. Almost had that done. Would have loved to gone fuel drag racing again. We stayed in touch all these years.”

Shirley called me next, clearly devastated over the loss of one of her best and most loyal friends. Through tears, she testified, "He gave so much to drag racing. Out of all of the people who have been with me, all the people I can even remotely put a finger on, Dana never left my side. He never dropped the ball, he never turned on me; he was always there. He was a very, very special man."

I remember him well from his time on "the Snake's" Skoal Bandit Funny Car crew in the late 1980s, a car that -- as Prudhomme liked to say of his good-running cars -- ripped their throats out, especially in Indy in 1989, where they won the Bud Shootout and the U.S. Nationals and set the national record to boot.

Word is that Kimmel was close to making his return to tuning with a very notable name -- that information may well be disclosed in the coming weeks -- that would have surprised many people and given him the chance to showcase his skills.

Kimmel, who began his career on the Jr. Fueler of Larry Klienbrook, was the crew chief for Muldowney during her final season in 2003 and stayed busy after motorsports in several non-motorsports businesses and even led the creation of a baseball field in Fife, Wash., from fundraising to helping build the complex that will benefit youth in that area for years to come. He'll be missed but not forgotten.

OK, that’s it for today. Enjoy the rest of the week and your weekend; I’ll see you next week.