If you’re a real drag racing fan – and you wouldn’t be here if you weren’t, right? – when you think of Chicago, you think of Chris Karamesines. With the Chicago national event looming just ahead, my thoughts certainly turned this week toward “the Greek,” and I thought it was time we talked about one of his most memorable race cars.

No, I’m not talking about any of the famed Chizler slingshots or even the wedge dragster previously discussed here. Today's topic is solid gold, baby.

At the 1975 Gatornationals, Karamesines wowed everyone when he rolled his new dragster out of the trailer. There, gleaming in the Florida sun, sat a dragster the likes of which had never been seen before, covered from wing tip to front axles in 24-karat gold. And I do mean covered. We’re talking rear wheels, wing struts, spill plates, injectors, valve covers, roll cage, steering wheel, hand brake, and windscreen all the way down to the nuts and bolts, and even the Dzus fasteners had been plated in pure gold. Even his helmet was gold-plated.

Surprisingly, there’s not a lot of documentation on this car to be found. Internet searches found virtually no details, and there doesn't appear to be any magazine articles about the car, probably because of its short initial life, which I’ll get to. I emailed a trio of Insider regulars with vast archives of Drag Racing USA and Super Stock & Drag Illustrated collections, but none could find any articles on the car.

I called “the Greek” a few days ago for the story behind the story, but his memory was a bit fuzzy on the details – that’s what happens when you race for more than 50 years with dozens of cars – but his explanation for the gold-laden rail was pretty simple.

“You’re always trying to do something nice with your cars, and I thought that would be a nice thing,” he said, low-key as always. “Plus, people were already calling me ‘the Golden Greek,’ so I decided I’d put as much gold on it as I could.”

He couldn’t remember a lot of the details of the actual process, nor the amount of precious metal that went into the car, other than that the plating had been done through a company associated with his longtime benefactors at Strange Engineering.

Thankfully, Jeff Stange – son of company founder Bob – remembered it well, and what he couldn’t remember, he was kind enough to get for me from his dad.

According to the Stanges, the work was done for Karamesines (at Strange’s expense, as it turns out) at Precision Plating in Chicago. Strange had become involved with the company not by being a customer, but by custom-building production-line machines for Precision to use in its business.

According to Jeff, the gold was electroplated to the steel in a time-consuming multipart process that involved extensive polishing of the steel parts, followed by a triple-plating process of copper and nickel and then the gold, which probably was no thicker than .005-inch.

“The Greek’s” helmet also was specially treated with a coating so that it would take the electric charge necessary to bond the gold to it. 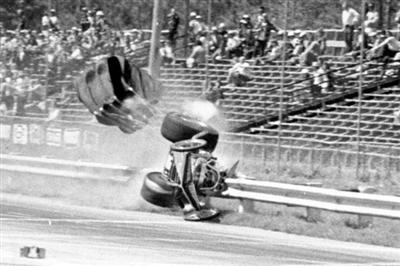 The rub on the story, of course, is that “the Greek” crashed the beautiful car on a qualifying pass after a tire blew – with the car going onto the gold-plated cage at points – setting off a top-end treasure hunt for bits and pieces covered in the precious metal.

“A lot of people got different parts of it,” he told me. “The NHRA museum still has part of it.” Indeed, part of the gold-plated front axle is included in a Karamesines display at the popular Southern California shrine to the sport.

How many dollars worth of gold are we talking about? Good question.

A photo caption of the wreck in National DRAGSTER – the only reference to the car that I could find in ND – reported that the car was covered in 22 ounces of gold, which, at the 1975 cost of $200 per ounce (I looked it up), would be about $4,400 (minus the actual plating costs). In SS&DI's coverage of the event, a caption reported that the car was "embellished with $8,000 worth of gold plating," which would have been about 40 ounces.

Though it would make a much better story if either number were indeed true – $8,000 or even $4,400 at a time when you could buy a turnkey used fueler from a big-name team for about $10,000 – by the Stanges’ best recollections, only about an ounce and a half of gold was used in the process.

"There's no way there was that much gold on the car," Jeff confirmed, saddened somewhat to debunk a great myth. "Even two ounces is pushing it. I know that doesn't sound as good as 22 ounces. Maybe 'Greek' said that pulling someone's leg."

Karamesines built another car later that year – “that was one that was even prettier, with a Phoenix bird painted on it in gold leaf,” he recalled – that he ran for a while, then sold to “someone in Las Vegas.”