By basic appearance, today’s Top Fuelers haven’t changed much since “Big Daddy” Don Garlits debuted his successful rear-engine dragster at the 1971 Winternationals. The small tires are still in the front, the big ones in the back, the driver still sits in front of the engine, and a rear wing in the back still glues the rubber to the road (Yes, I know that Garlits didn’t have a wing on the car when it debuted in Pomona, but work with me, OK?).

Sure, there has been some experimentation with the configuration: streamliners, ground-effects tunnels, long wheelbases, short wheelbases, different engines, even Garlits’ own sidewinder, but one car still stands out uniquely for its bizarre shape: the Lisa-Rossi wedge. As you can see in the accompanying photos, it doesn’t fit the traditional definition of the wedge dragsters that we explored here for three months in 2010, that being a V-shaped, hinged body that cloaked the rear of an otherwise standard Top Fueler.

Nope, this car, derisively nicknamed “the flying doorstop” by some, featured a hexagon-shaped body with a wide, flat top and, at least in its earliest incarnation, no rear wing.

The car has a history as intriguing as its shape, and, like all good tales, it’s a story cloaked in controversy, which I’ll get to in a bit.

Roy Fjastad, an alumnus of Scotty Fenn's famed Chassis Research dragster factory, built the car at his Speed Products Engineering (SPE) chassis shop in Santa Ana, Calif., ostensibly for his own efforts. Master sheet-metalsmith Tom Hanna built the body, which, it was hoped, would provide enough downforce to forgo the rear wing. The story takes a twist there because, before it could be completed, veteran Top Fuel racer Fred Farndon came into the shop looking for a new car and fell in love with the concept as it sat on the jig and bought the car. Farndon, however, was in the midst of a sticky divorce and had to abandon the car he also thought would be too heavy to e.t. anyway and sold it to Vince Rossi and Tommy Lisa.

Rossi and Lisa had been a part of the Top Fuel scene in the mid-1960s. Rossi, in fact, along with John Garrison, had tuned Lou Baney’s famed Tom McEwen-driven Yeakel Plymouth Center dragster, and before that, he and Lisa had been partners on the Baney-Rapp-Lisa-Rossi dragster and numerous others. Rossi was the tuning genius, and his longtime best friend Lisa, a successful West Coast-based women's clothing manufacturer, was the wallet.

According to Rossi’s son, Jim, “My father and Tommy wanted to go back racing in 1970, so they called [Jack] Ewell and asked him to be the wrench and to go find a car to buy. Somehow, Ewell knew this car was available and brought a Youngblood sketch over to our house to show Vince what he felt was going to turn the racing world on its ear. They bought her, and the rest is history.”

In that history were a number of drivers – including Billy Tidwell and Danny Ongais – two national speed records, and, according to the team, the sport’s first five-second pass.

According to his son, Rossi had taken the car to Lions Drag Strip one Wednesday in 1972 during one of the track's doorslammer nights to do test runs, trying to dial in the clutch.

"The car launches and makes a picture-perfect blast," he remembered. "The time light flashes a 5.99 e.t., and the announcer goes crazy. It was the first five-second run ever in a Top Fueler. As fast as the announcer blurted that out, the mike went dead for what seemed like an eternity. All of a sudden, the announcer comes back on with a ‘We're sorry, folks, but obviously that was an incorrect read, and we apologize for the error.’ Well, my father and Tommy ran up to the tower and saw for their own eyes the 5.99 e.t. still lit up on the clock and started to ask [track manager] Steve Evans what was up. Steve came up with some story that it had to be wrong -- the sun must have been setting on the beams, triggering the error in reading -- and he was not going to allow the reading to be logged in as official. You could imagine the disappointment Vince and Tommy felt when Steve disallowed the run. One thing is for certain: This car was the unofficial first car in the fives, make no mistake about it."

The car did make it twice into the official record books. Tidwell set the national record in the car in July 1972 at Lions with a speed of 239.64, and Ongais bettered it to 243.24 at that year's Supernationals at Ontario Motor Speedway for the first 240-plus-mph national record. Jack Martin also drove the car, which was sponsored by popular surf-wear manufacturer Hang Ten in 1974.

The Hang Ten sponsorship came via Lisa’s clothing connections, and some may also remember the car being briefly sponsored by Vel's Parnelli Jones Ford in Torrance, Calif. Rossi was the manager of the facility at the time and had gotten co-owners Vel Miletich and Jones to sponsor the effort. According to Jim, Miletich’s sister was the business manager of the dealership and was “very, very upset that they were involving themselves in this drag racing adventure financially, so it only lasted a few short months. Vince removed their name from the car and ran on his and Tommy's own dime until Hang Ten climbed onboard the last year that we raced (1974).”

Lisa and Rossi also fielded a conventional Top Fueler, which was driven by a number of shoes, including the famed “Loner," Tony Nancy.

“I lost my dad in April of ’99 and miss him terribly," continued Jim. "Ongais was a good friend of ours and very close to my dad. He came to Vel's every day, and my father would buy him lunch and shoot the bull. When my dad and Tommy quit racing in ‘74, he asked my father to hook him up with Vel and Parnelli, and they started that short-lived digger/Funny Car team, but Ongais' real passion was Indy, and that's how he got his Indy start, through that introduction to Vel and Parnelli. That digger Danny had with Vel and P.J. was the exact replica of our last digger we had in tandem with the wedge that Tony Nancy drove now and then.

“I loved every car that my father owned over the years, but the wedge is one that I can never truly get over,” he added. “This car was just a blast to roll out to the track and watch the people’s eyes pop out of their heads. My brother and I begged my father to keep the car, but he wasn't the kind of guy to hold on to things once he was done. Good ol’ Gene Beaver came in and sold both the wedge and the red car and the trailer to different people, and that was the end. I have been trying to locate this wedge for years, and according to Garlits, it’s hanging in some garage in Texas. If ya ever catch wind of where she be today, let your ol’ pal Rossi here know.” 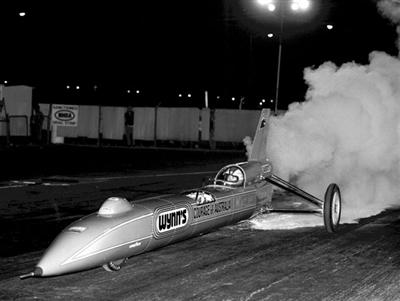 OK, I said that we were done with rocket cars, but that was before good pal and photo ace Steve Reyes weighed in with this shot of the Courage of Australia dumping peroxide all over the starting line as outlined in Glenn Menard’s story here Friday.

Recalled Reyes, “There was rocket fuel all over everything. I was lucky and had my camera case closed, but I still got burns on my hands, and that fuel melted my tennis shoes off of my feet. Everyone on the starting line smelled like rocket fuel, and the track surface was boiling where it had received the biggest dumping of fuel. Just another fun evening at Irwindale.” (And you wonder why they were outlawed …)