Feedback2. I think that’s right. I was never very good at math that didn’t involve elapsed times. (I am pretty good at Photoshop, though. Except my drawing here would seem to indicate feedback to the fourth power or something, or feedback reversed or turned upside down or both … or something.) Anyway, feedback to your Friday feedback feeds the always-hungry Insider blog today. 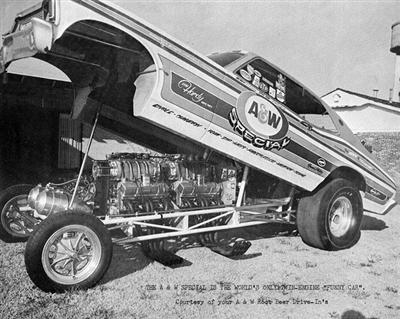 Friday’s little foray into the multiengine Funny Car microtrend (three cars that we know of) elicited a good bit of interest and a similar amount of disbelief. I was thrilled to get the image at right from Ross Howard of Dean Dillingham’s Don Hardy-built A&W Root Beer twin-engine Nova, which is by far the best image I’ve ever seen of the car, even if it is in black and white. Howard got it while working as a carhop at his local A&W (Didja know that carhops got their name because originally they hopped onto the running boards of cars to take the orders? That was before roller skates I hope).

I also got a note from John Waters informing me of Dillingham’s recent passing. I did a little poking around and found out that, indeed, he passed away very recently, Dec. 5, at age 74. It would have been great to have asked him more about the Nova, which also was featured in the September 1971 issue of Car Craft.

Modeling enthusiast Tom Haman was excited to see the photos of Don Hampton’s American Bandstand Corvette because he’s trying to replicate it in 1/25th plastic scale. “I am trying to duplicate this incredible plastic-fantastic execution using a resin '69 Corvette coupe Funny Car body from Slixx Decals. The body duplicates Gene Conway's 'Vette Funny, but it's the best available. I really needed details of the V-Twin small-block configuration (I used to have it in the original Hot Rod or Car Craft, but those are LONG gone!). I think I can at least make a reasonable copy (in plastic, of course!).” If anyone has info on how that all worked, dropped me a line, and I’ll pass it on to Tom. In the meantime, here’s a second look at the AB Corvette, also from Orange County Int’l Raceway.

Perhaps the spookiest bit of feedback from Friday’s column came after Insider regular Cliff Morgan wrote in, remembering the demise of Leo Gaskey’s Killer Whale Funny Car at Irwindale. Morgan couldn’t remember the driver’s name or date (Don Dieckman, April 21, 1973), but the memory of the wreck lives on. “[It was] the first time I ever saw anyone die in a crash. When he crashed, I knew he had died -- just had the feeling that the crash did him in. Not something I wanted to remember. I've seen a lot of crashes, but you always pray the driver gets out OK.”

I hit up Leo’s son, Glenn, who, along with crewmember Tom Ridings, was watching from the back on their ramp truck and well remembers the car getting loose and Dieckman overcorrecting. “It went straight across the track and hit the guardrail almost head on,” he recalled. “It rolled down the top of the rail a couple of times, and from what I remember, it was one of the rail posts that hit him in the head.”

After the accident, Gaskey – who tried but found driving a Funny Car a little too claustrophobic and turned over the reins to Dieckman, who had helped build the car -- sold all of the parts and pieces of the operation and gave the money to Dieckman’s mother, then sat out a few years before making a comeback with Ridings and the ex-Littlefield & Sublett Vega.

“After the Irwindale deal, he stayed away from the track for a while,” said his son. “He only went out with Tom a couple of times to race Rolling Thunder, his last drag race for a while anyways was the day that Herm Petersen got burned at OCIR. He was good friends with Herm, and he quit going to races for a long time after that.”

I asked Glenn where the interesting name for the car came from. And here’s where it gets a little spooky.

“Donny came up with the name before he ever drove the car,” he explained. “Donny was a surfer. My dad said for some reason, he hated whales when he was surfing and had a fear that one would get ahold of him in the water.” (shivers) 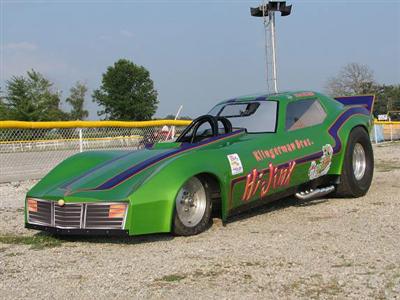 In other breaking news, interest in rear-engine Funny Cars remains at an all-time high, and we have another current-car sighting. Mark Klingerman sent images of his trick-looking Hi Jinx Corvette, a car whose chassis began life on the asphalt.

“This car has interesting history because it ran as a rear-engine Funny Car back in the first part of the '70s, then was turned into a sand car in 1975 by Terry Henderson of Phoenix,” he said. “It was then called the The Phoenix. [Henderson] was the one who mounted the 'Vette body on it in ’78. Terry is still alive, remembers that a previous owner (no name) ran it on asphalt and that it had been built in San Bernardino Calif., in 1971. That's as far as his memory will work; I’m still trying to work out the rest. I sent pics to Pat Foster (he worked for Woody Gilmore and built [Jim] Dunn's car) before he died and Don Long; both agreed the car was professionally built in that time period but couldn't ID the builder. They both concurred it may have been a one-off, built in someone’s garage. The chassis is all chrome moly, TIG-welded. The mystery continues.

“It ran [on the sand] until the early '80s, then sat dormant for 20 years. I bought the car 10 years ago and then converted it back to an asphalt car. I had a big-block Chevy and ‘glide mounted in the car but have since removed them.” 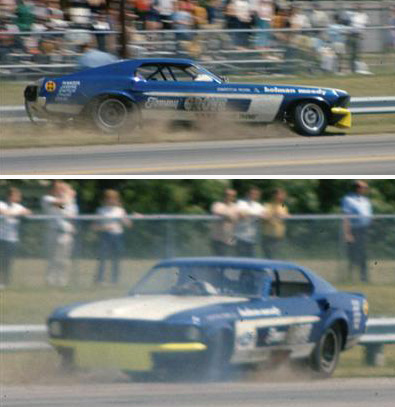 In cruising back through my email, I stumbled across this sequence of photos that Fred Militello sent after I published the story of Rob Bruins spinning out the Green Elephant in Columbus (How the Elephant Crushed the Guardrail). Militello, who worked at dearly remembered Tri-City Dragway in Saginaw, Mich., from 1973-77, sent in this neat little three-photo sequence shot by Don Ruppel of Funny Car great Tommy Grove losing the handle on his Mustang during a burnout at Tri-City.

Stuff like this, and Friday’s hair-raising Fremont photo of Jerry Ruth’s Mustang hiking the front tires while smoking the rears, reminds me of how wild and woolly those early Funny Cars were. Look at any video from YouTube that shows drag racing in the late 1960s through early 1970s, and almost every class of car provided white-knuckle launches. Roadsters skitter about and look ready to tip over, Top Fuelers rear up and do crazy things; even Pro Stockers – today’s paragon of precision – make like fuel altereds on occasion.

I’m certainly not saying it was a better time for racing, though one could argue that it was more entertaining. Today’s crew chiefs and technology are so good – and the stakes so much higher – that the cars make good run after good run like clockwork. There’s pretty much no way you could have talked me into driving a 1970s slingshot Top Fueler, but I think that the majority of us with any kind of wheel savvy could get a Top Fueler from A to B if it just hooked up and went down the track. Of course, what happens on that other 2 percent of the runs is what separates those men from us boys, so I’m not volunteering.

And finally, much in the vein of this column, we bid a fond farewell to Jim Lytle, whose multi-engine Allison-powered Big Al machines certainly have a place in Funny Car lineage. His ’34 Ford Tudor featured a one-piece liftoff fiberglass body covering a 3,000-horsepower Allison aircraft engine. According to Dave Wallace, the liftoff fiberglass body directly inspired Mercury racing boss Al Turner, who saw Big Al II at the NHRA Winternationals car show in early 1964, and led to Don Nicholson’s flip-top Mercs.

His good friend Phil Smith wrote, "As you know, Jim was known far and wide for his many Allison-powered drag cars and trucks along with numerous hot rods he built as a young man in the '50s, with virtually all his cars being featured in numerous magazines, often on the cover. Most famous was probably the car that started the Allison legacy associated with Jim, the mail-slot chopped blue '34 Ford two-door sedan. Jim pioneered a number of firsts with this car, including the first t one-piece liftoff or front-lift-up fiberglass body and the multi-disc clutch setup, which produced the first smokeless runs of any high-horsepower drag car."

Lytle died Dec. 8 in Lahaina, Maui, Hawaii, where he had made his home for years.