The return of Fan Fotos

There has been so much to talk about lately that I’d forgotten how long it has been since I reached into the vault for Fan Fotos. In this column’s earlier years, I ran these pretty regularly as a way to thank everyone for their support and interest and, more important, to show off photos that haven’t seen the light of day in decades and that, with good certainty, have never been published. I mean, after all, we’ve all seen the same wonderful professionally shot images of great moments and cars in our sport’s history so many times that they’re as familiar as our kids. (Or pets, for those of you not inclined to have kiddos.)

I try to hang on to everything that everyone sends because you just never know what might come in handy (I have digital file folders full of all sorts of arcane stuff that would take me weeks to identify but might make a fun future column), and that includes reader submissions, so I just closed my eyes and clicked an email for this week’s choice.

So, let me introduce you to this week’s contestant, Butch Massoni, and a selection from his photo collection (it rhymes!).

Massoni started going to the drags in 1966 while a resident of our state capital, Sacramento, which of course meant visits to Sacramento Raceway (“Sacto,” to us old-timers), Infineon Raceway (back when it was Sears Point), Fremont/Baylands Raceway, Kingdon Raceway (Lodi, Calif.), and Vaca Valley Raceway. He even journeyed south to good ol’ Orange County Int’l Raceway (“I considered OCIR a temple,” he admitted) a few times to see the Manufacturers Meet. When he joined the Marines in 1972, he was fortunate enough to be stationed at El Toro, just about a mile from OCIR, so he became a frequent visitor there as well as at Irwindale, Lions, Pomona, and Ontario Motor Speedway.

“I loved Funny Cars but always enjoyed fuel altereds as well,” he wrote. “I saw some real nasty stuff along the way. I loved to get the nitro deal where, as kids, you'd just smell it and almost get a nosebleed. I shot these using everything from a Kodak Instamatic to a real camera, a Nikon.”

The photos are his, the descriptions mine. Enjoy. 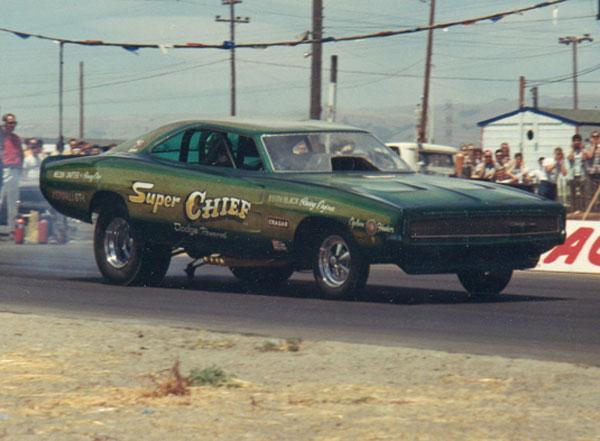 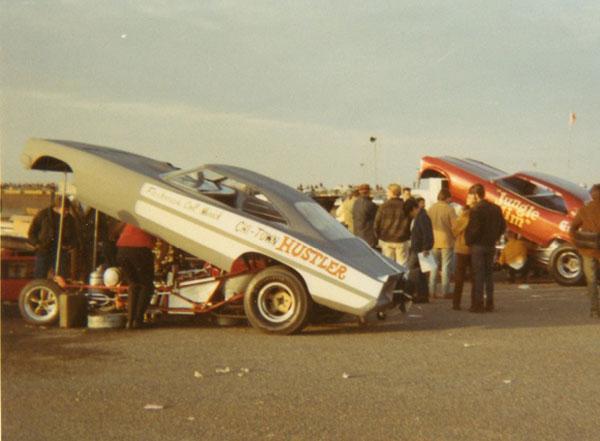 A primered Chi-Town Hustler got serviced alongside “Jungle Jim” Liberman’s red Nova, circa 1969. 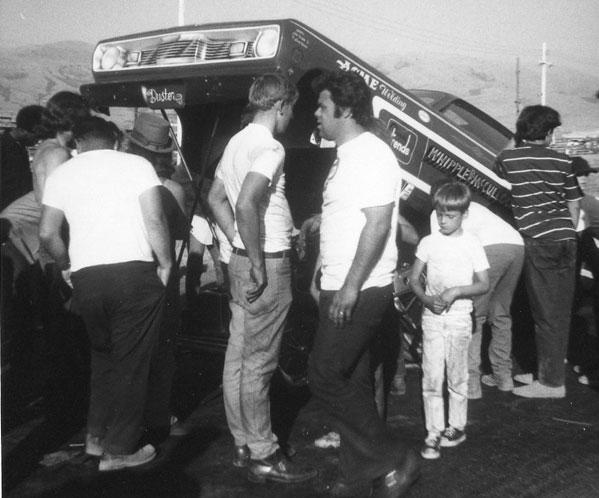 Ed McCulloch walked past the Whipple & McCulloch Duster, one of the first (the first, claims "Ace") floppers with side windows. Looks like Fremont again 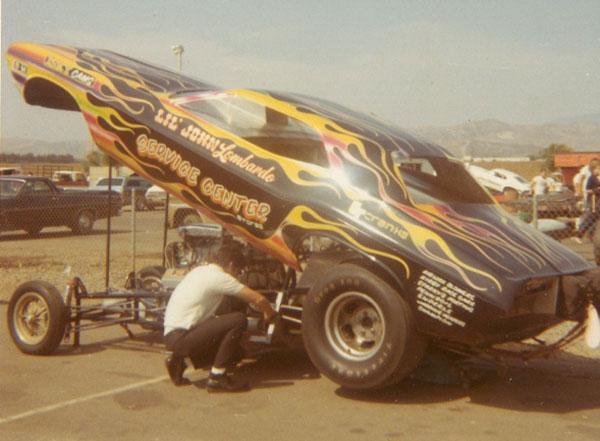 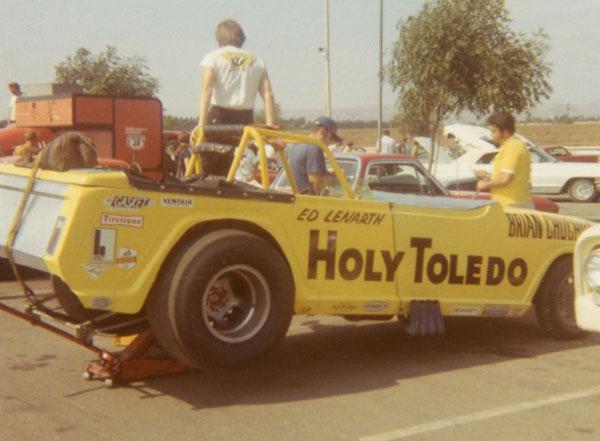 Back when men were men and Funny Cars sometimes were Jeeps. The late Ed Lenarth; looks like OCIR 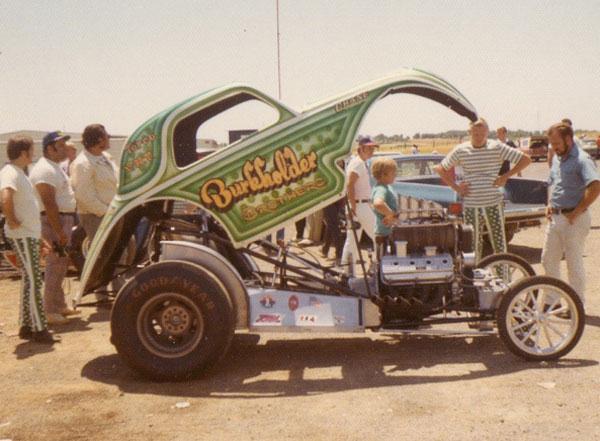 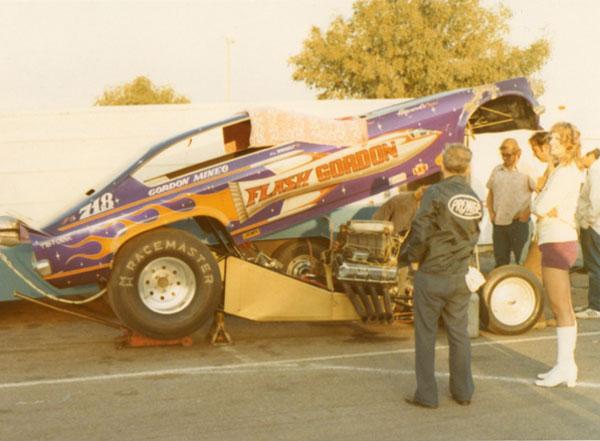 Everyone thinks of the late "Flash Gordon" Mineo as being Texan through and through, but "Flash" ran most of his early career based out of Huntington Beach, Calif. (note 718 permanent number). He sat out from 1979 to 1988, then reached two national event finals in the 1990s. This is in the pits at OCIR. 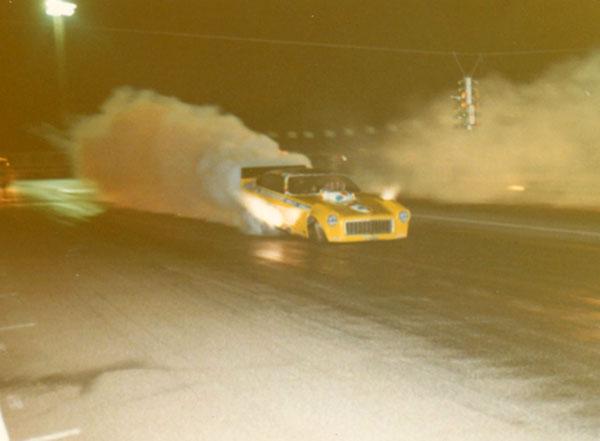 “
I lied about my creds and got a press pass at OCIR and was able to stand right at the starting line for this photo,” confessed Massoni. The slick Wonder Wagon Vega of Don Schumacher laying down a smoky one under the lights at the ‘County.'

Updates and more info on these photos can be found here.

I also wanted to share with you a note I got from Art Marshall, whose Top Fuel victory at the 1972 Grandnational I wrote about here several weeks ago. As most of you know, Marshall’s victory, in an ex-Don Prudhomme dragster, was the last win ever by a front-engine slingshot Top Fuel dragster in NHRA national event competition.

Marshall shared his story with me, and in subsequent interviews with two of the racers he beat, I learned there was a little controversy surrounding the perceived use of pre-race tactics by Marshall’s team specifically -- that it might have delayed its startup in an attempt to have its opponents overheat. I felt a little conflicted to include the info in what otherwise should have been a happy-happy-joy-joy tale, but the motto here is “The stories behind the stories,” and, well, that seemed to be one.

Despite my casting a bit of a cloud on the nostalgia party, Marshall was thrilled to have been remembered and his greatest day relived but wanted to go on the record about the whole starting thing. So, in the interest of fair reporting, here goes …

“Since I nor my partner nor any of my crew had ever heard about the comments alluding to our attempting to burn down my opponents, I felt compelled to respond. To set the rest of the record straight, neither I nor my crew did anything intentional to overheat the other guys. Although my late-model Hemi could take more heat than an early model, it needed more temperature to make horsepower. Therefore, waiting to fire up would not have been to my advantage. If memory serves me correctly, Clayton Harris had a late model and the other two were aluminum Donovans, which could take more heat than a cast-iron motor.

"At a Top Fuel meet that year, prior to suiting up for first round, I went to my opponent (a well-known driver) and made an agreement to let me push down first to get some heat in the motor without overheating his cast-iron early model. When we were given the sign to go, the other driver shot off ahead of me and rushed through their burnout and pre-stage. No heat, no power. I lost. So much for being a naïve nice guy.  Nothing was ever said by me or my crew.

“Overheated clutch? Hey, they’re slipper clutches; set it up correctly! The Tricky Tipster listed me as an outdated dark horse. There was water in my motor, too, and the puke tank (overflow) was mounted behind the rear tires.

“In winning the Northeast Division points championship, we qualified at every race we entered, including the Summernationals, where we were definitely outclassed. We won our share and set multiple low e.t.s and high speeds in the points chase and never had a complaint from any other racer. My team and I are proud of what we accomplished during the 1972 season.”

Also for the record, Marshall never asked for this to be printed but agreed after I asked.