Feedback on your feedback

The countdown to Pomona continues -- now at an even 40 days before the kickoff of NHRA's 60th Anniversary season – while around here, the cleaning continues. We devoted a good portion of Wednesday to the final (and ugly) part of completing the move of the Editorial and Photo departments, which was cleaning up the flotsam and jetsam that accumulated in the 17 years that we were in those offices. We filled the better part of two Dumpsters with excess issues of National DRAGSTER and old press kits and discarded worn-out office items and furniture.

The cleanup continues as well at Insider Central, though the task is much more pleasant, as I sort through feedback to the feedback that you have sent in the past few years and that I have shared here the last two weeks.

The photo of the ex-Don Schumacher Funny Car body in England drew a lot of response, including from Graham Warley, who was part of the crew of Peter Crane's Stormbringer Top Fueler, which is credited with the first five-second elapsed time outside of the United States, and confirmed that the body in the photo is indeed the Stardust Barracuda that Schumacher raced in the United Kingdom in 1972 and 1973. At right is a photo of the car in action, which was supplied by Peter Walton from the UK Drag Racing Nostalgia website.

"Santa Pod Raceway bought both Schumacher's flopper and Paula Murphy's car, which I recall was a Plymouth Duster, when she raced as Miss STP," wrote Warley. "I can't recall how many times they raced, but when Don and Paula returned to the States, the cars were then run by Santa Pod. Roy Phelps ran the Stardust with the late Allan 'Bootsie' Herridge driving, and Nobby Hills ran the Murphy car with Owen Hayward driving.

"I have no clue as to whether the chassis in the pictured car still survives, but I very much doubt it. The body was used in the form you see it as an injected car (hence the odd scoop) for a Capital Radio DJ called Mike Allen. The name on the front spoiler of Gary's Shack was a custom car shop in South London."

Reader Steve Pointon of San Diego called the arrival of the cars in England "one of the most important events for British drag racing" because it was the first time since the 1960s that American racers competed there. Pointon backed up Warley's info about the drivers of the cars that were left behind and added that Tony Nancy's Revelliner Top Fueler also was there, and, with Nancy's help, Hills' team built an "almost exact copy" for themselves.

It wasn't all smooth sailing for the Brits, according to Pointon. "On one of Allan's first passes in the car, it had a huge blower explosion that took the roof off of the car and launched the blower about 50 feet into the air. This was one of the first big blower explosions in the UK and was an incident that Allan never forgot. Luckily, Santa Pod was run by the Phelps family, who were experts in fiberglass repairs, so they managed to perform an immaculate repair on the shell and decided to keep the original paint scheme. The car was driven by Allan for a number of seasons until it was sold to the Stone family team and driven by Dave Stone, They must have loved the paint scheme as they had all their cars painted the same way (the car was retired by the Stones around 1980 and was replaced by the ex-Raymond Beadle Blue Max car, yet again painted to look like the original yellow Stardust car [as shown here in these photos taken by Alan Currans]. The original Stardust car was then fitted with an injected alky motor and painted in the Capital Radio color scheme you see today. The Paula Murphy/Miss STP Duster was destroyed in a crash at Santa Pod.

"I also can remember Don Garlits leaving his Swamp Rat in the UK for a few months after he visited and it being driven by British racer Dennis Priddle, who had to use one of his own Ed Pink motors, which looked very odd with the non-Garlits-style three-butterfly Bugcatcher. Gene Snow's Snowman Plymouth Arrow Funny also was sold to Santa Pod (ironically renamed The Force), as was Leroy Chadderton's Vega Funny Car. One of Tom Hoover's Corvette Funny Cars was sold to a Swedish racer and another sold to a British racer. As you can see, Europe, and England in particular, really is the Funny Car graveyard."

You can find more of Currans' photos and info about some of these cars on this page of  the 70sFunnyCars.com site. 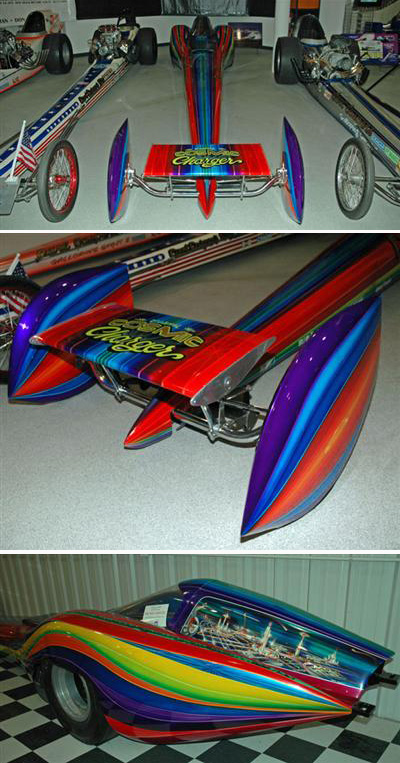 The photos of Carl Casper's Cosmic Charger and Bill Traylor's Bold Attempt streamlined Top Fuelers also elicited comments. Rick Howard sent me sone photos  that he took of the Cosmic Charger a few years ago at the Kruse Automotive & Carriage Museum that give us a much better look at the car. Howard said that museum personnel told him that although no record of drivers or times could be found for the Cosmic Charger, the car did attempt to qualify for several races

Added Howard, "According to museum personnel, the Galloping Ghost I ran a best of 6.95 at 209 mph. The Galloping Ghost II was driven to victory at the 1969 AHRA Nationals at New York Int'l Speedway by Butch Bryant. The All-American won the 1971 AHRA Winternationals and had a list of drivers that included Leland Kolb, John Kraneberg, Danny Ongais, Gary Cochran, and Don Culp. Another interesting tidbit about the All-American is that it was once stolen while in Keith Black's shop. 'Big Willy' Robinson of the Brotherhood of Street Racers fame was asked to help put the word out to find the rig, and it was suddenly returned unharmed and sits in the Kruse museum today. Only the Cosmic Charger lacks information, but museum personnel have promised to stay on top of it for me after I told them I was interested in doing a story of their cars and museum."

The Kruse museum, in Auburn, Ind., sounds like an interesting place. According to Howard, one side of the museum is dedicated to military vehicles of all kinds from World War II, and the other side houses a wide range of special vehicles, including horse-drawn carriages, stagecoaches, fire engines, the latest Batmobile, NASCAR and Indy cars, a '35 Packard that once belonged to TV star Andy Griffith, and about a dozen or so Casper custom show cars, including the Popcorn Wagon, the Paddy Wagon, Peanut Machine, the Vanturian, and the Pinball Wizard.

Irv "Butch" Vetter was the only one to respond with info about the swoopy Bold Attempt, but it was pretty good stuff, and he supplied our best look yet at the car. Vetter reported that he bought the car from a racer in Palatine, Ill., "who did race the car with [a] needle-nose body to get it squared away, then he was planning on running the fiberglass body, but he never got the chance to because of cancer. When I bought the car, it was offered to me at a price I couldn't pass up! I was running a Top Fuel car built by Lee Austin of Chicago, and I needed new tubing, but this car came to my attention. I had the car about a year, but my roofing company took off, and I decided to sell the car. I sold it to a guy who told me he was going to make a sand dragster out of it. I thought, 'What a shame,' but I later heard he had no money and didn't race it, either."

Jeff Foulk's in-depth recounting of his GT40 Ford LeMans-bodied Funny Car flipped the ol' memory switch for Jim Gorman, who remembered having seen that car in the not-too-distant past. "I took this photo of the car at a Geezers at the Grove festival at Maple Grove in late summer of 2009," he wrote. "Sorry I can't tell you anything about the owner, powerplant, etc. as the owner was not around at the time. It's a very distinctive car from a time when the cars really were a product of their builders' skills and imagination." Just looking at his photo, I can read the name Tim Hansberry under the window, whom Foulk had indicated is the current owner, but it's nice to see a clear and modern photo of this most unusual entry.

Veteran track operator Glenn Menard enjoyed the great shot of Jim Annin and Mike Snively in Seattle and offered a humorous side note to the pair's historic 5.97 pass later that year in Ontario that occurred while Menard was managing famed Irwindale Raceway.

"The week before that famous run at Ontario, I thought Annin was going to throttle me," he remembered. "They were at Irwindale to test the week of the Supernationals, and after one run, a dip in the return road right next to the e.t. shack ripped the pan right off of that Keith Black Hemi. I thought 'Diamond Jim' was going to blow a gasket and take it out on me. They made a run to Black’s shop for a replacement, made another run, and the rest is history."

OK, that's it for this topic for now. I have a lot of other older e-mails that I'll be sorting through and perhaps sharing, and I'm sure that some of you may be surprised to see something that you sent two years ago that didn't fit at the time finding its way to publication.

Speaking of publications, yesterday we officially began work on Issue 1 of the 2011 volume for National DRAGSTER, which will cover all of the news for 2010's top 10 Pro finishers. We've been working the phones already for more than a week, but yesterday began the official production cycle for 2011. The issue will ship next Wednesday, so it's almost time to start checking your mailboxes.

Enjoy your weekend; I'll see you next week.