Another column, another collection of awesome ramp-truck shots sent by the Insider Nation. Anymore, I'm finding it cooler to ogle the cars on the backs of the trucks than I am the trucks themselves. As we are rediscovering/re-remembering, the use of ramp trucks was not confined just to the Funny Cars of our most prominent memories.

Like the wedge-dragster thread that we reference for its similar runaway nature – we went from talking specifically about the very few wedge Top Fuelers to a discussion and show-and-tell of all manner of streamlined vehicles – this thread long ago seems to have left the tracks (hence my Photoshopped sign) and devolved into something much broader.

I appreciate all of the mailings because the photos truly offer us a look back at that aspect of our sport. We're always so interested in what these cars looked like on the track – smoke billowing from the rear tires or the front wheels hiked on a ripping run – that we sometimes forget all the rest of what it took to get them there, and, again, it's not just the nitroburners. Some very creative thinking was going on back then about how to get the race car to the track not only in the most efficient way but sometimes in a battle of one-upsmanship.

Anyway, as we head into the weekend and many of us are finishing off our to-do lists before heading to Indy next week, I'll leave you with another batch of reader-submitted ramp trucks that covers a variety of cars and classes. This may be the last batch because I'm beginning to see a bit of repetition in the ranks, and I'd hate to bore you to tears with that. Besides, I have a very interesting thread to begin next week that's sure to inspire debate among the masses. 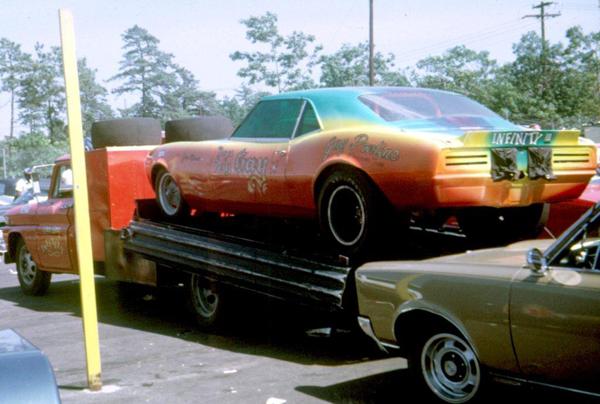 Bill Baldwin sent me a half-dozen shots, some of which he took, from 1965 to 1969 at York Dragstrip and New York National Speedway. Here's Don and Roy Gay's amazing Infinity Firebird. 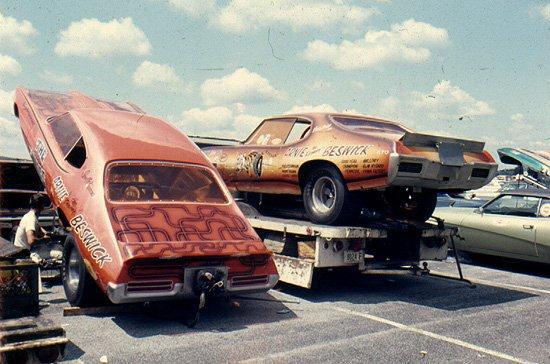 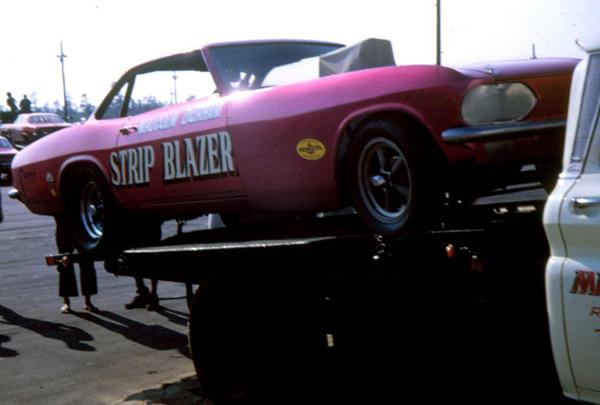 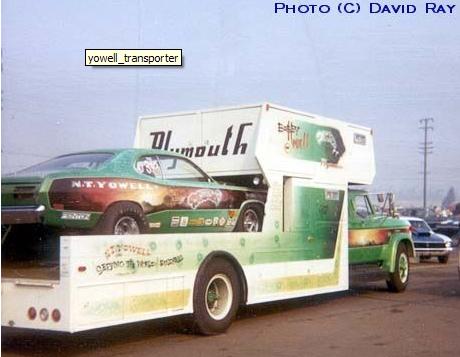 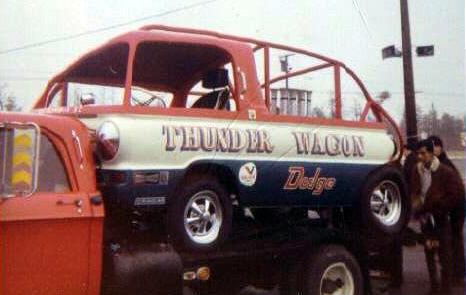 Robert Nielsen sent this shot of Carroll Claude's F/MP Shoebox on the back of his ramp truck at the 1970 Super Nationals at Ontario Motor Speedway. "I always used to hate to see this car show up because at this time, I was running in the same class, and make no mistake about it, this was THE car to beat, not only in the class but in Modified Eliminator!" he remembered. 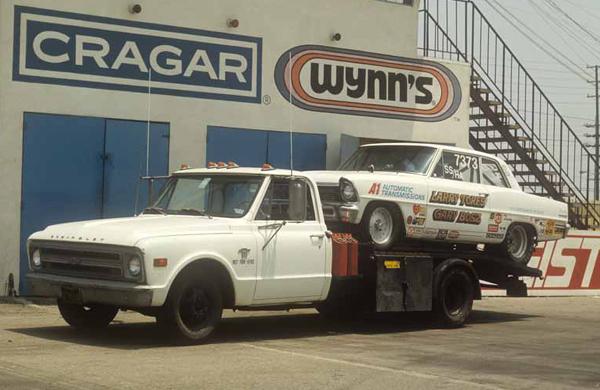 Dave Kommel of Auto Imagery fame sent along this pic of the Tores and Bosz Nova on the back of Larry Tores' ramp truck. "I spent a lot of hours in that truck, both driving and as a passenger, and we had a lot of good times," he recalled. "This pic was taken at Irwindale on a Saturday morning. Gary Bosz was off on his yearly Army Reserve duty, and Larry rented Irwindale for a few hours in the morning before it opened to the public. I ran the clocks while he hotlapped the car. I'm guessing this was somewhere between '73 and '75."

In response to my query about Don Schumacher's Funny Car being loaded into an enclosed car carrier bearing Tommy Smith's name, James DeSalvo, who grew up next door to Schumacher, remembered The Don buying the hauler from Smith and going right out on tour with it before he got around to having the truck repainted. "It was an awesome sight at night to see the car loaded in the back of that truck all lit up by the spotlights," he remembered.

After running a shot Tuesday of the enclosed trailer carrying Dick Titsworth's Seaport Automotive flopper, I heard form his son, Jeff, who sent this link with a whole lot of photos of the truck in its many phases. "You can see that it went from short and standard to stretched with sleeper to enclosed as your picture shows," he wrote. Check it out.

I received an interesting note from Mike Hooks, who said that Mattel is going to make the Cha Cha Mustang Funny Car (featured in Tuesday's column) this year to add to its DragStrip Demons lineup as well as another go-round of "the Snake" and "Mongoose" wedge Top Fuelers. He said that there also have been a lot of rumors of ramp-truck sets coming later. How cool would that be???

Quite a few of you found significant humor in Leigh Buttera's tongue-in-cheek request for a wedge Top Fueler on a ramp truck to combine the subjects of two of this column's longest-running threads. "Those two angles were meant to be together," agreed Trevor Caswell.

Well, try as I might – and as could probably be expected – I couldn’t find any reference to (and certainly no photos of) a wedge dragster strapped to a ramp truck, so I made my own. First off, do you know how hard it is to find a photo of a ramp truck that doesn’t have something on its back? Or a nice side shot of a wedge Top Fueler? So I ended up digitally removing the enclosed portion of a ramp truck and using the only side shot I could find – of Kenney Goodell's wedge – for this quick conceptual look of how one might have looked. To be fair, I didn't spend a lot of time in Photoshop to create this, and I certainly didn’t add whatever bracing would have been necessary for anyone to even think about this. But, nonetheless, here's what it might have looked like. Maybe someone actually did have one, but I doubt it.