For a guy who created and lived a lot of it, Don Prudhomme sure digs drag racing history, especially the equipment that helped make him a megastar in the sport. He began by tracking down and restoring a lot of his old Funny Cars – six of them reside in his Vista, Calif., shop – before focusing on his old Dodge ramp truck, which he and Willie Wolter spent a year restoring to its early-1970s glory.

Then "the Snake" went on the hunt for the truck's brother, the '67 Dodge D-700 that hauled on its back the Plymouth Duster Funny Cars of Wildlife Racing partner Tom McEwen. You may have seen a note here a few weeks ago asking for clues to the whereabouts of "the Mongoose's" old hauler as I knew that Prudhomme wanted desperately to have the matched set (he already owns an ex-McEwen Duster).

I received an e-mail this week from team manager Skip Allum, and the accompanying first-look photos as proof of the rare find with the assurances from Prudhomme that this one, too, will look as it did when it wowed fans across the country decades ago.

Prudhomme's truck had been used by "King Richard" Petty, and McEwen's rig was originally ordered by Plymouth for drag racing's Sox & Martin team. After he bought it, McEwen had the truck modified, copying the features on Prudhomme’s. The era of the ramp truck lasted only until enclosed trailers became popular in the mid-1970s, and the prospect of having their precious cargo not only secure but also out of the harsh elements during their cross-country treks soon led Prudhomme, McEwen, and every other ramp-truck-owning team (save for the Chi-Town Hustler gang, which used a ramp truck well into the 1980s) to sell their trucks and place orders with companies such as Chaparral Trailers. The convenience of being able to leave their car and trailer at the track and head to the hotel or to eat in a duallie opened up a whole new world.

Many of the ramp trucks were quickly lost to history, gobbled up by circle-track racers and others, and no one really looked back until Prudhomme got the itch to find his. Remarkably, wife Lynn still had the original bill of sale with the VIN on it, and before long, they had tracked it down – it had remained in California – purchased it, and restored it. (Read my account of the restoration here.)

Prudhomme's truck has been a huge hit wherever it has been displayed, including at last year's California Hot Rod Reunion presented by the Automobile Club of Southern California and as part of this year's Golden Corral at the 50th Anniversary Kragen O'Reilly Auto Parts NHRA Winternationals presented by Valvoline, not to mention at prestigious events such as the Barrett-Jackson Auction, the SEMA Show, and the Dana Point Concours d’Elegance.

Once his truck restoration was completed, Prudhomme began the search for McEwen's rig but was not making a lot of progress until a chance encounter at the recent L.A. Roadster Show in Pomona, where he was approached by former Winston West stock-car racer Don Lowery, who said he had purchased the truck from McEwen in the 1970s. Lowery not only had the records and photos -- including the one at right -- to prove his ownership claim, but he also showed Prudhomme something even more valuable: the name of the guy in Arizona to whom he had sold it. 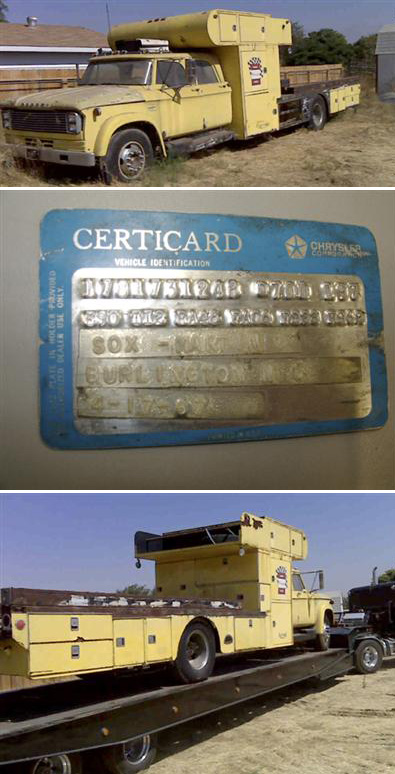 With Lowery's help, Prudhomme tracked down the owner, who had moved to Riverside, Calif., 15 years ago, somewhat simplifying the process. Still, Prudhomme probably had reservations on the trip. When he found the truck, it was in far from pristine condition, and the owner, knowing its history, had asked for a princely sum. It took some negotiating before Prudhomme got his prize, and I'm sure he was wary, but he had brought along a flatbed truck … y'know, just in case.

Like his own, the former McEwen truck was "not in the greatest condition," according to Allum, but what convinced Prudhomme to buy it was a small, credit-card-sized piece of tinwork in the glove box, the original vehicle-identification Certicard from Chrysler Corp. as issued to “Sox-Martin, Burlington, N.C., April 17, 1967.”

Prudhomme's guys loaded up the truck and took it to "the Snake's" shop, where the restoration is already under way and, like that of Prudhomme's truck, is expected to take 18 to 24 months. Once completed, Prudhomme will paint the truck and car in matching colors, as on  this Hot Rod magazine cover, and display the two together, which is sure to bring tears of joy to the eyes of many people my age, who remember as teenagers seeing the two-car operation rolling into the pit gates, immediately swarmed by fans.

I can hardly wait.