You guys had a lot of spare time on your hands this weekend, right? I don't know how else to explain the avalanche of ramp-truck photos that appeared in my Inbox the last several days. Seems that a lot of you have either been scouring the Internet for old ramp-truck photos or digging out your personal shots, so I'd like to share some of the treasures.

I received so many that I can't begin to show them all efficiently in this space –- Eric Widmer sent me about 100 alone -- so I'll show some below, though they're really only a fraction of what I received and only those that didn’t have a copyright watermark or other credit. I've been given a fantastic amount of leeway by many of our sport's legendary lensmen to reprint their work here without prior permission, but I don’t want to turn that into a carte blanche rule.

Most of the photos do not have obvious credit lines, and the ones that do, I have received permission to run.

These are in no particular order, and I've annotated them as best I can. 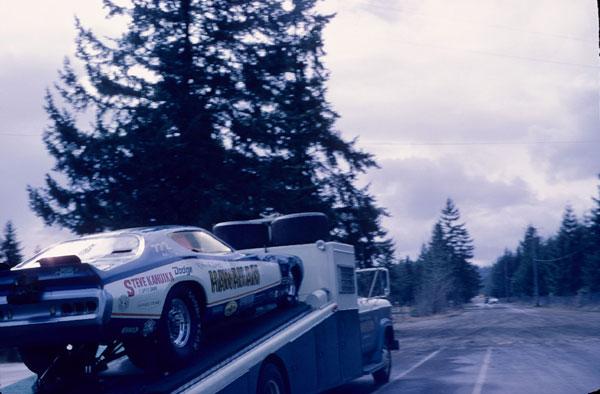 Man, I love this photo by Al Kean. Here are Roland Leong and the Hawaiian gang heading out of Seattle, bound for who knows where and the next match race date. 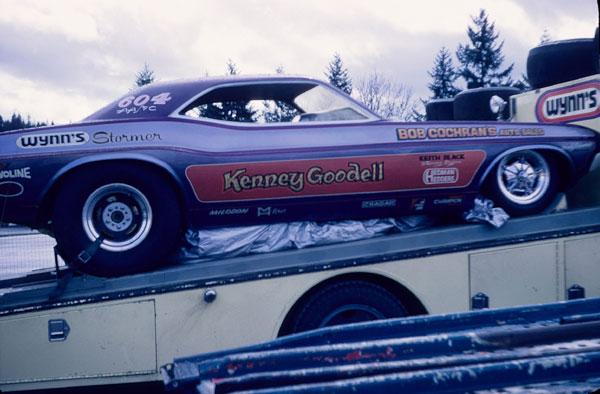 More of Kean's work from Seattle: the rig of the late "Action Man," Kenney Goodell. What I like about this is the detail. You can see the tie-down strap through the rear wheel and the protective silver car cover stashed under the car. 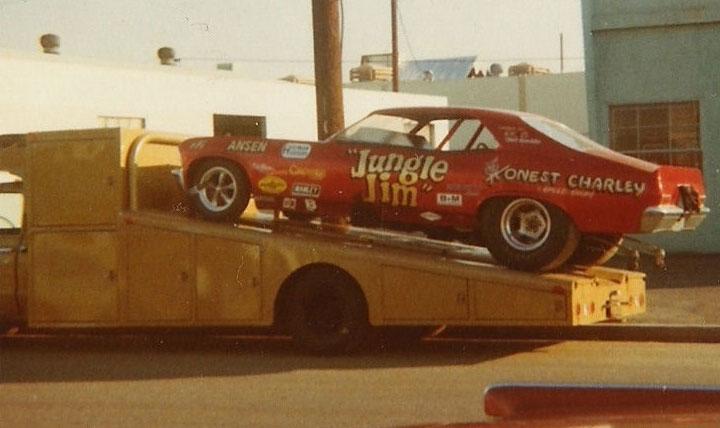 Sent in by "Beserko Bob" Doerrer, here's a shot of his then boss, "Jungle Jim" Liberman, set to head out from Garden Grove, Calif., on tour in February 1970. 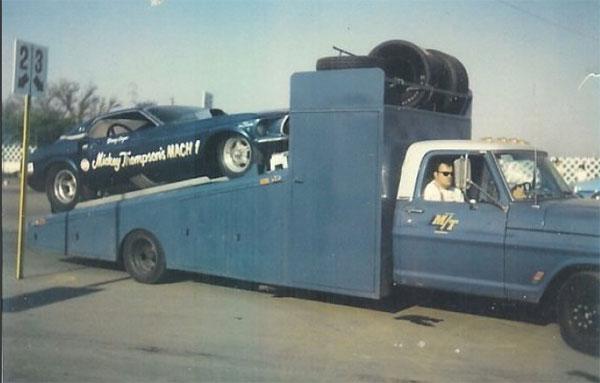 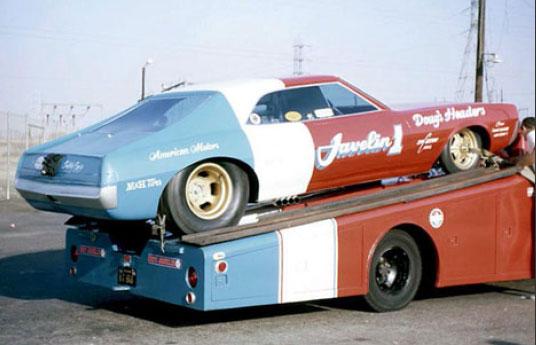 Doug Thorley's cool Javelin 1. I love how the car's red, white, and blue paint lines up exactly with the truck's. 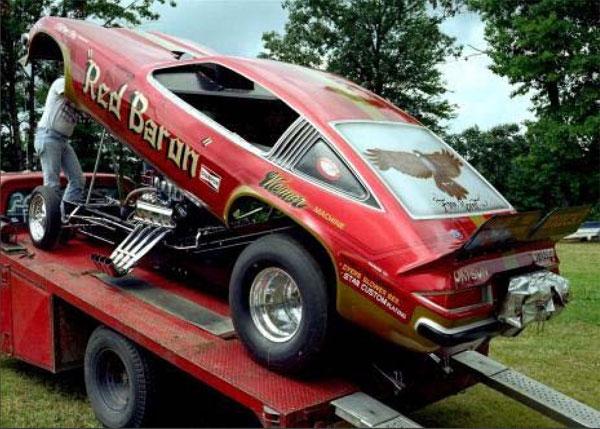 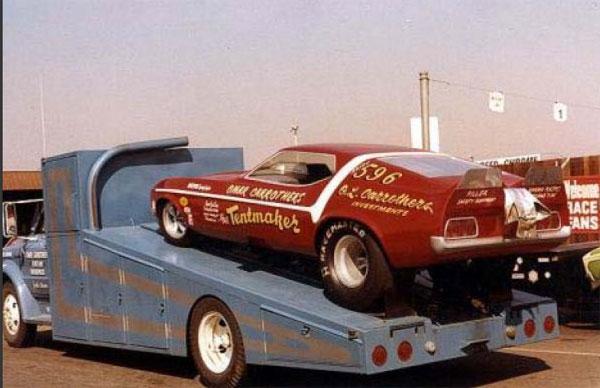 If you don't know whose car this is, you're reading the wrong column. 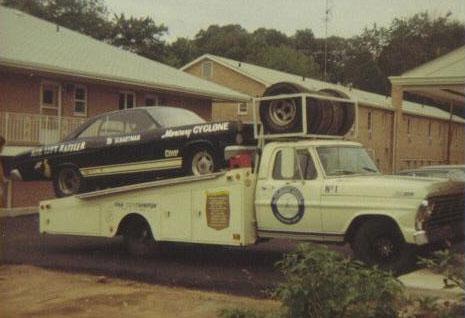 Bob Barktus was heading to Connecticut Dragway early one Sunday when he spotted Eddie Schartman's Air Lift Rattler rig in the motel lot on Route 66 in Middletown, Conn. 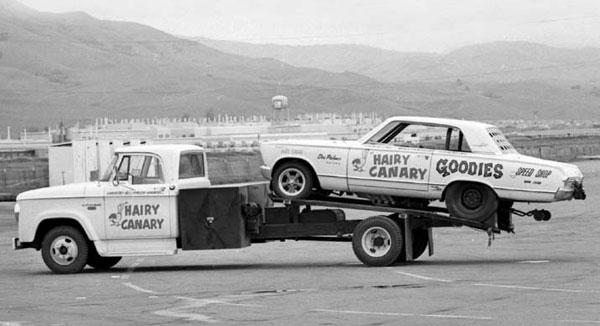 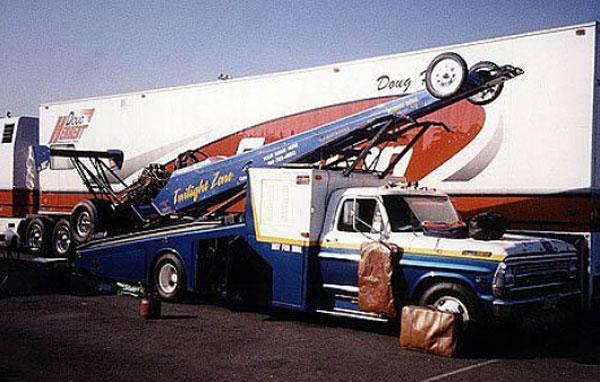 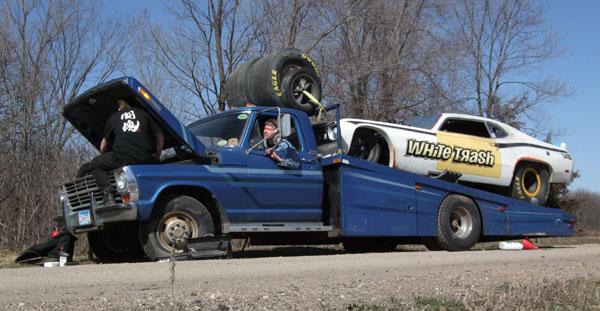 Ted Guth, who owns a nostalgia Funny Car, the White Trash Duster, with what I think is one of the most original paint schemes ever, sent this funny pic. "We're still using ours!" he said of the team's appropriately vintage ramp truck. "It is reportedly an ex-M/T truck that we use when we need to 'take out the trash.' " 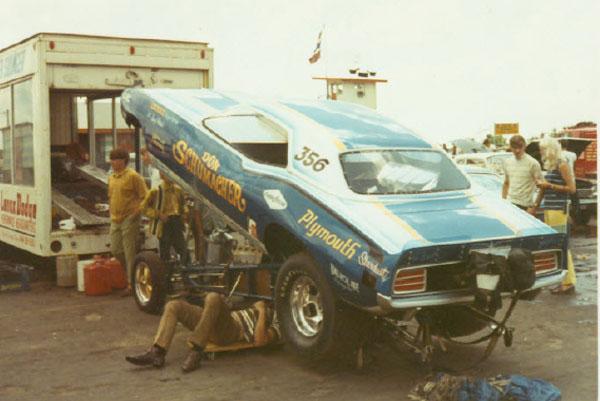 Here's Don Schumacher's Stardust flopper about to be loaded into a glass-sided ramp truck. I found another angle of this that shows that the truck was adorned with Tommy Smith's name to haul his Super Swinger. Not sure why Shoe was using it. 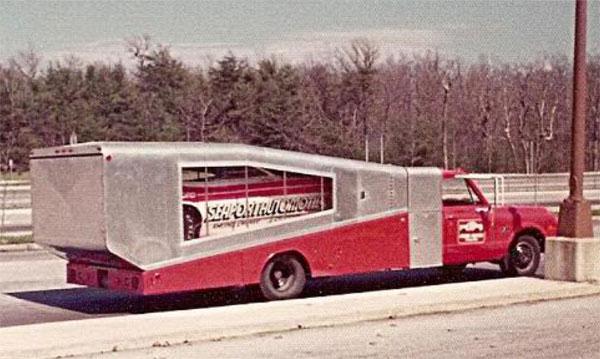 A great shot of another enclosed ramp truck, this one with Dick Titsworth's Seaport Automotive Funny Car

If you can't get enough of ramp trucks – even those not involved with drag racing – check out Vince Putt's Fotki page. He has about 100 other photos of all sorts of racing haulers.

And finally, I sometimes think that the Insider Nation is tuned into one another's wavelengths. Alan Collums wrote, remarking on Leigh Buttera’s joke about wedge dragsters on ramp trucks, saying that it reminded him of the late, great Comp racer John Lingenfelter, who used to haul his fast econo dragsters on a ramp truck.

"I don’t think I have any pictures of it but remember seeing it very well," he said. "John had built these long, skinny ramp extensions that bolted to the roof of the truck. The front tires of his dragster were right over his head when he was driving the truck. I live close to I-55 just north of Jackson, Miss., and remember seeing John coming down the interstate heading to Baton Rouge for the old Cajun Nationals. It was certainly an odd sight. So in response to Leigh’s joke, while John’s wasn’t a wedge car, it was truly hauled on a ramp truck."

And by pure coincidence, among the handful of images that Steve Reyes sent me this week to share is this great pic of Lingenfelter himself, lounging on the bed of said truck. You can’t see the ramp extensions that Collums mentioned, but you get the idea.

OK, that's all for the day. I'll see you later this week!