It's Ramp Truck Tuesday at the Insider … OK, well, I guess it doesn't need its own day of the week anymore because stuff just keeps pouring in. I've received a ton of ramp-truck photos – including many from beyond the Funny Car ranks – that I'll share today because, like wedge Top Fuelers, the trucks seem to strike a very touching nostalgic chord with many.

This first photo, one of many shot at Southland Dragway in Louisiana and sent by Gary LeBoeuf, is very interesting to me because it answers a question that came to light during my recent visit to Don Prudhomme's shop, where they're restoring this Tom McEwen truck.

Willie Wolter gave me a walkaround tour of the truck, pointing out where work needed to be done, where rust needed to be removed, etc., and when he pulled back the floor liner in the passenger side of the cab to show me the rust there, there was a clear buckle in the floorboard; we surmised that the truck must have been in a fender bender, and this photo, with primer on the right front fender shows, seems to bear that out. This may also have been where the truck lost its 1967 grille in favor of a later-model grille, as previously pointed out by one of our readers.

Added LeBoeuf , "When I read the recent Insider with Glen Menard's comments about the rained-out Hot Wheels race in Houma, La., it brought back memories of that day. Yes, I was one of the 5,000 or so that bought tickets for that day. It was one of those nasty rainy days we get down here in Cajun country, and it always seemed to me as a teenager that most of those rainy days happened on an important race day at Southland Dragway. But when somebody with the stature of Don 'the Snake' Prudhomme and Tom 'the Mongoose' McEwen came to town, you just had to be there! Of course, also scheduled to race on that day was our beloved local heroes, Candies & Hughes." LeBoeuf enclosed a shot of the legendary Louisianans' 'Cuda flopper and the really cool see-though trailer for the Fireball Vega. "The Fireball Vega was a fairly frequent visitor for a while at our track," he recalled. "I saw this particular trailer a couple of times, and then it disappeared."

Mike Goyda sent some very interesting ramp-truck pics, including these two. The first is perhaps the best that I've seen of the McEwen truck when the Sox & Martin team owned it.

You can see the paint scheme, and although the top is different (square instead of rounded edges), you can tell that it's the same truck by looking at the extended rear overhang and the location of the cabinets. It also looks as if it may have been the same red that McEwen's was … I wonder if he even had to paint it when he got it.

Prudhomme and Wolter did tell me that when McEwen got it, he worked to make it a twin to Prudhomme's truck, but it already looks pretty sweet. The second pic appears to be the same truck before the top box was enclosed, but don't hold me to that. I ought to give Buddy Martin a call to see what he can tell me. These may be two separate trucks

Still, it's pretty cool to see the truck in all of its Super Stock glory.

The photo that I ran last week of McEwen's rig in a parking lot at a motel was shot by the father of Gary Newgord, who wrote not only to claim ownership of the great shot for his dad but also to report that it was taken at the Holiday Inn in Racine, Wis.

"The picture was taken by my father, Noel Newgord, on a weekend of an event at Great Lakes Dragaway," he noted. "The parking lot would just be full of cars. One of the weekends, the whole United States Drag Racing Pro Stock team stayed there."

He also sent this pic of the Chi-Town Hustler ramp truck and pointed out the Bounty Hunter-style tombstones on the rear of truck listing all of the teams that had been "hustled." The Chi-Town team labeled that little section "Boot Hill." You can find it in the gallery at the end of this story.

We had a discussion here a few weeks ago about "Jungle Jim" Liberman's enclosed trucks, and Eddie Buck of Eureka, Mo., has the photos of it as well as a funny story. You can see the truck here behind McEwen's Duster.

"It was built  by Oleynik in April 1972 for Briggs Chevrolet," reported Buck, who now owns it and is restoring it. "Since I've owned it, I have heard many stories from the likes of  Fred Frey, 'Berserko Bob' [Doerrer], and 'Jungle  Pam' [Hardy]. The best I have heard so far was told by Pat 'Mouse' Walsh. In fact, he told me on the exact spot it happened. He said he and  Raymond Beadle were standing in the pits at Atco and saw  the truck pass by, enter the grounds, and come rolling up to them. 'Jungle' gets out obviously proud of his new truck and asks Beadle what he thinks of it. Without missing a beat , Beadle says, 'That looks like an ant carrying a loaf of bread.' " 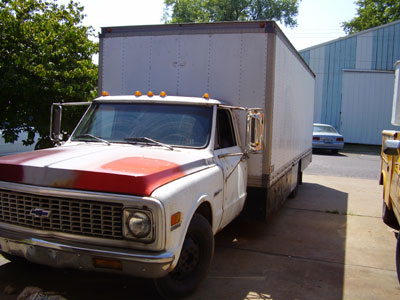 Buck reported that he found the truck, which later was used by Pro Stock racer Ken Dondero, in Pennsylvania about six months after finding Liberman's last Camaro, which also is being restored.

Mark McClelland wrote to express his appreciation for the column and offered a suggestion: "You have covered lots of great stuff! I can’t wait till you do a feature on one of the best competitors in our sport's history: Gary Burgin." 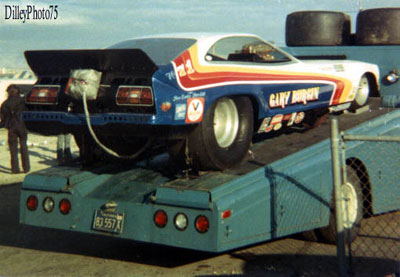 I can partially fulfill that request while maintaining the subject at hand. Burgin was an amazing Funny Car racer throughout the 1970s – we all remember him beating Prudhomme in the Indy final in 1976 to hand "the Snake" his only national event round-loss that season – and I coincidentally just received this photo of Burgin's ramp truck in the pits at National Trail Raceway at the 1975 Springnationals, a great pic shot (with a Keystone 126 camera!) by Ron Dilley, who was attending his first drag race that weekend. Great timing all around.

Speaking of the great state of Ohio, Mike Coughlin, of JEGS fame, forwarded this photo of his dad Jeg Sr.'s operation from 1972. That's the Dale Emery-driven JEGS Camaro Funny Car on the truck.

I also received a very interesting e-mail from Bill Sampson, who said that his former brother-in-law still owns a ramp truck that Dale Armstrong used during his early days. "It was a '60s Chevrolet ramp truck with a 472 Cadillac engine installed in it. It was silver in color when he purchased it and was nice for that period of time," he wrote. I mentioned this to Armstrong when I saw him at the Prudhomme gathering, and "Double A Dale's" eyes lit up. He'd love to get his hands on it. I put the two together, so we'll see what happens.

Speaking of the Prudhomme deal, Chuck Wright wanted to know why longtime "Snake" pal and mentor "T.V. Tommy" Ivo wasn't there. "I've been to many of the Night of Champions events at the museum on Friday nights at Pomona, and Tommy is ALWAYS there." 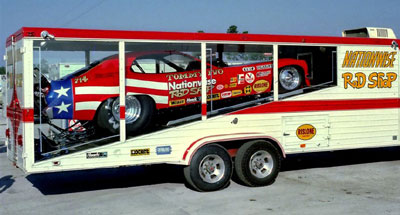 The simple answer is that the 11:30 a.m. meeting time was WAY before Ivo ever gets out of bed. He's quite the night owl, and, as we've mentioned here, he lives on what he calls "Ivo time," in which the day begins at about 3:30 in the afternoon and ends in the wee hours of the morning. He was still probably having his Wheaties while we were wrapping up lunch. And speaking of Ivo, Insider pal Tom Nagy sent this great shot of Ivo's Dart inside the glass-sided trailer, taken at the 1976 Gatornationals.

And speaking of glass-sided trailers, I heard from reader Ray Rains, who knows where Jim and Betty Green's glass-sided Green Elephant trailer is. "The trailer was brought to Hawaii by Carlton and Jane Fererra, but Carlton passed a few years back, and Jane still has the trailer," he wrote. I again did my matchmaker thing and passed on the contact info to Betty.

Finally, here's a gallery of ramp trucks that shows that not just the Funny Car crowd had ramp trucks. Pro Stockers, Super Stockers, and all kinds of iron (including more floppers) are "riding the ramp" in these pics. 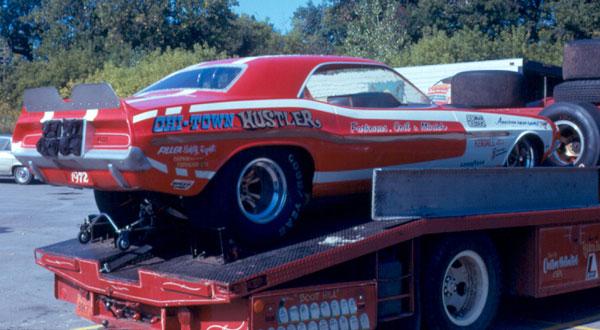 The famed Chi-Town Hustler with its "Boot Hill" tombstones 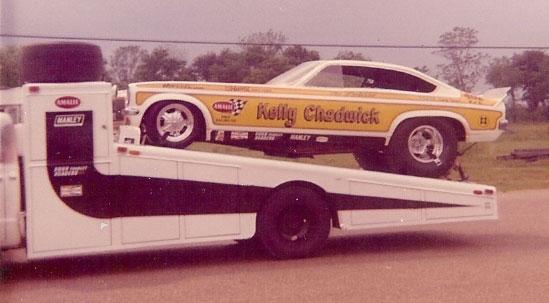 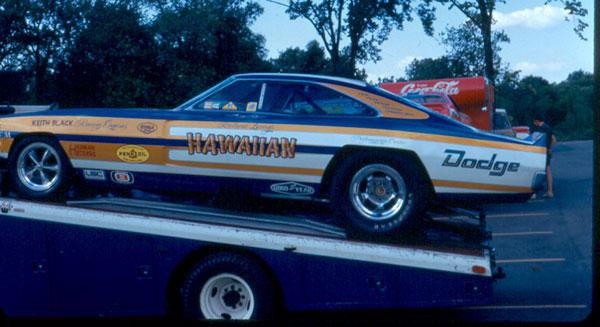 The Hawaiian. According to Roland Leong, this is the same car that is now restored but with a different paint job. He painted it after they won the Winternationals in 1970. 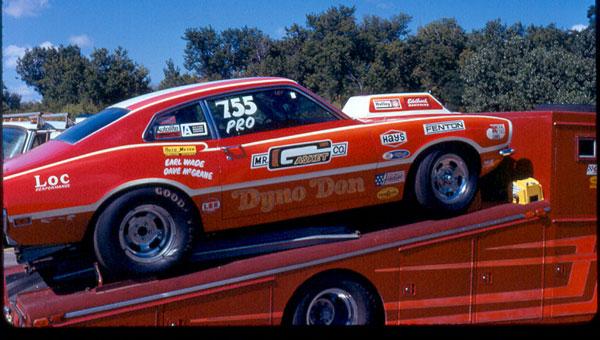 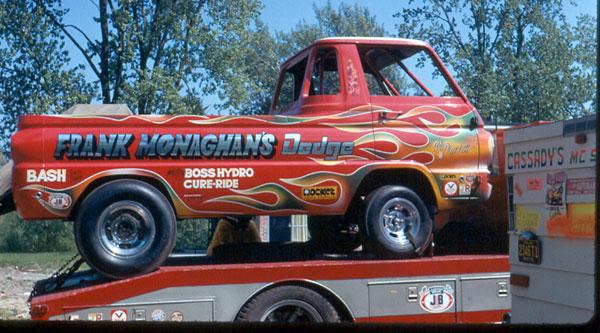 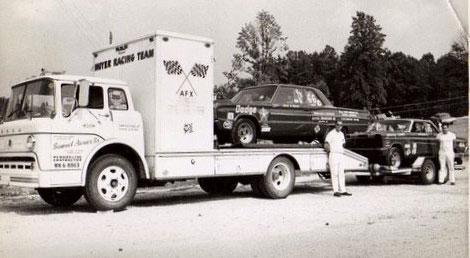 Sam Auxier said he believes that his truck, built in 1965, was the first state of the art in transport truck like it.

Bob Wood (AKA "The Original Woodeye") sent in this pic of himself and ""Fast Eddie Schartman at Lassiter Mountain Dragway in 1964. "I believe the truck was a '63 and we hauled the '64 Comet station wagon and the '65 Comet coupe with it. It had a well behind the cab where we could haul a spare motor," he writes. 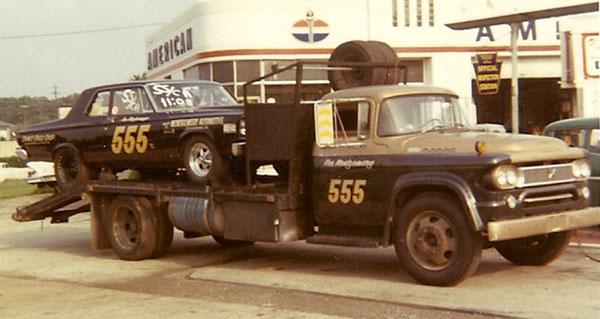 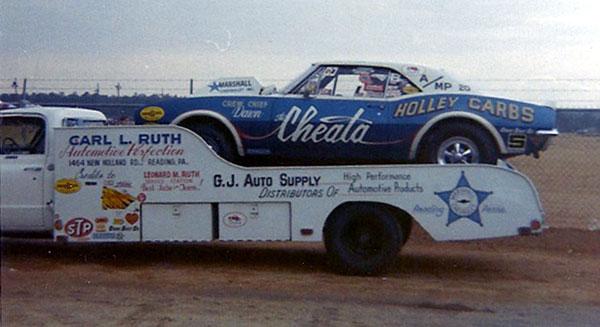 I'm guessing by the lettering on the truck that is is the machine of Carl Ruth, who many know as a former Alcohol Funny Car racer out of Reading, Pa., who once fielded that sweet Crown Victoria flopper.