Odds and ends injected to the thread

There are times when I wish that I could work exclusively on this column, and this is one of those weeks. I have so many things on my "want-to" list that I just can’t seem to get to them. I have promises out to so many people to call for stories that it's driving me a little crazy not being able to get to them all while doing my "real" job at National DRAGSTER.

I still need to call back Funny Car pioneer Ron Pellegrini to talk about a couple of things, including the founding of the Midwest injected Funny Car circuit, his involvement in early Funny Car body building through his company, Fiberglass Ltd., and the tale of Mickey Thompson's interesting Grand Am Funny Car, which I mentioned several times is (for some reason) one of my all-time favorite floppers. I still want to sit down with the one and only Bill Doner, whom I met at the Prudhomme get-together a few months ago, to share the tale of one of drag racing's most famous/notorious promoters and track operators. I just recently made contact with another much-storied figure from drag racing's past, "Captain Jack" McClure, he of rocket go-kart fame, and want to share his story. I have an ongoing promise to someday get and share the images of longtime SoCal photographer Barry Wiggins. I need/want to talk to well-traveled Funny Car racer Butch Maas about his storied career. I just talked with Rodney Flournoy the other day following the passing of his dad and want to tell their great and inspirational story as well. You can look for some of these tales in either upcoming columns here or in my Pure Nostalgia column in National DRAGSTER. So much to do, so little time!

In the meantime, feedback keeps backing up from stuff we've discussed, especially in the injected Funny Car thread, so I'm going to unburden my Inbox with some of the jewels therein.

How about injected Funny Car video? Reader Franklin Amiano pointed me to this video on YouTube that he thought we all might enjoy. "It's incorrectly tagged as a Coke Circuit race," he wrote. "It's actually an 'East vs. West' booked-in race between Smoker Smith's blown alky circuit (including the Cassidy Bros. Grand Am) against the Midwest UDRA guys, including Bob Larimore's Pegasus Pinto. These shows were common in the early spring when it was too cold to race up north. Enjoy!" We will. Thanks, Franklin!

Mike Sheets, another competitor in the Midwest circuit, sent this photo of his old ride. "This is a car I drove in 1972, with crew chief Al DaPozzo," he reported. "I left California with Leonard Wagner and a car he purchased from Ray Alley, a lay-down Firebird. We came to Chicago and stayed in Steve Manhart's shop for a while.

"Things didn't go so well, and Leonard decided to go home. Bob Chapman offered me the ride with Al as crew chief, a job in his shop building racing parts, and an apartment I shared with Lance Larsen. I could not say no. We had some good races and some not so good, but Al was a terrific guy to drive for."

Reader Dale Cole sent a handful of photos of injected Funny Cars from the 1960s and 1970s that you can find  below. "They were taken at Sunset Dragstrip in the summer of 1967. Sunset was an eighth-mile hole-in-the-wall place on Route 62 between Sharon and Mercer, Pa. It was owned by George and Alex Theopolis, who always got the best to come, rumor has it because they paid in CASH. What great times they were. I am 68 years young and have taken pics at every meet I attended back to the early '60s. I lived in northeast Ohio and now reside in Charlotte and attend zMax Dragway at both NHRA meets. Enjoy!" 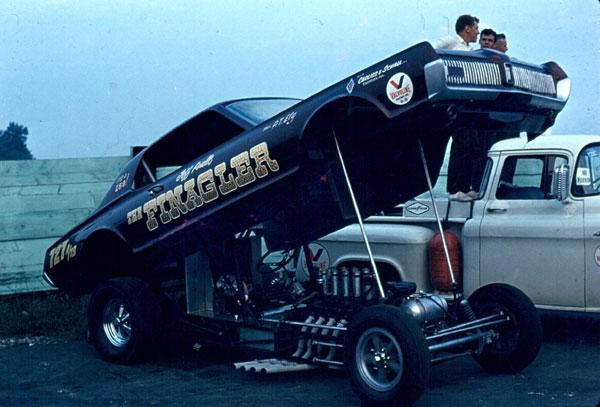 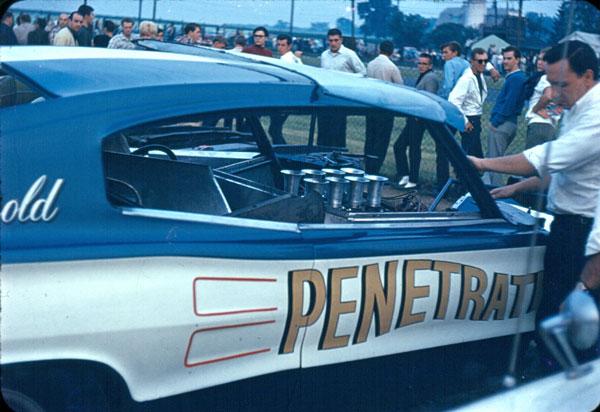 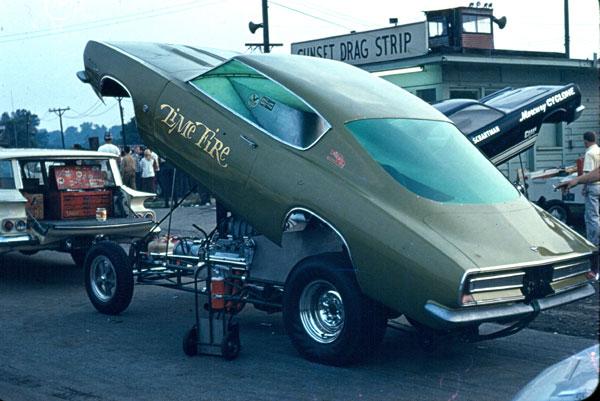 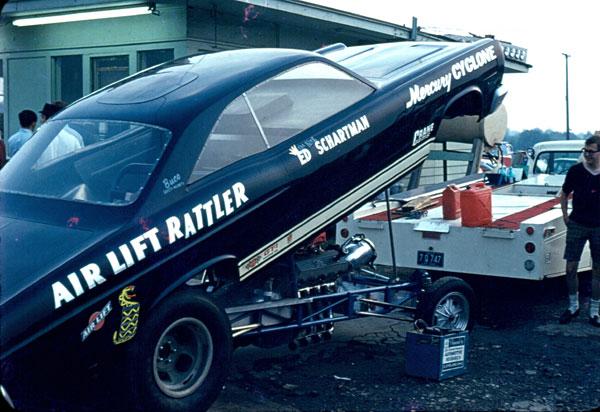 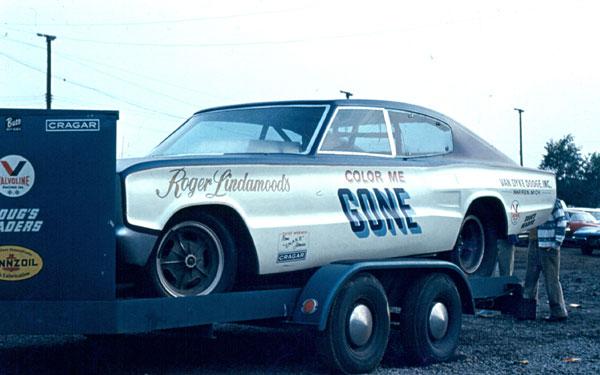 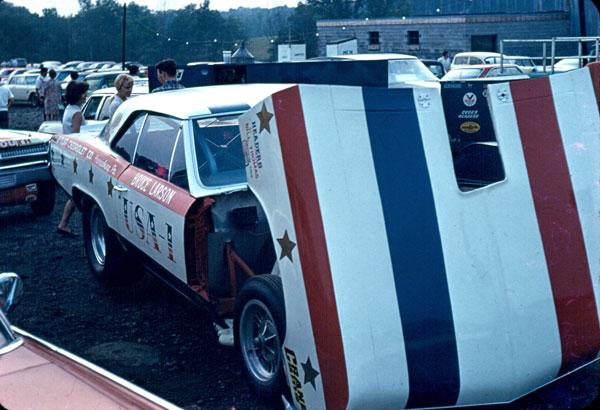 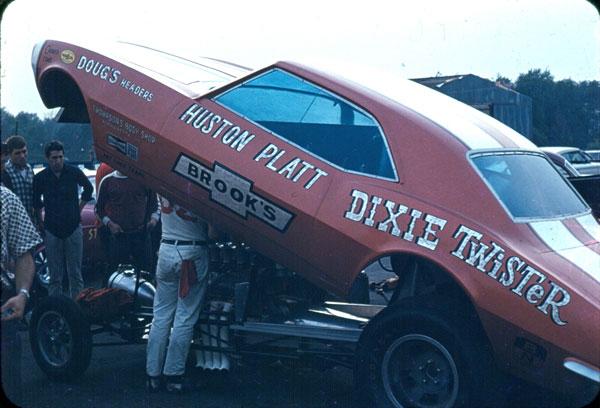 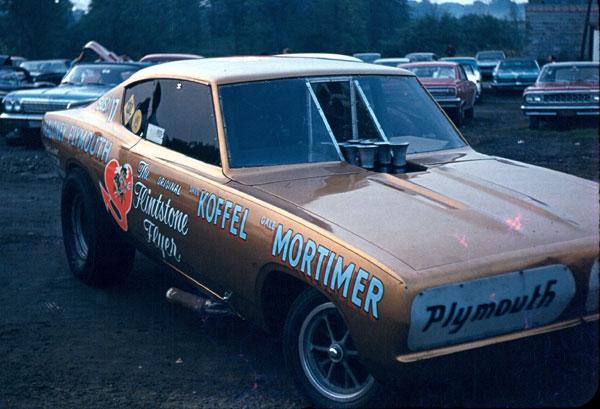 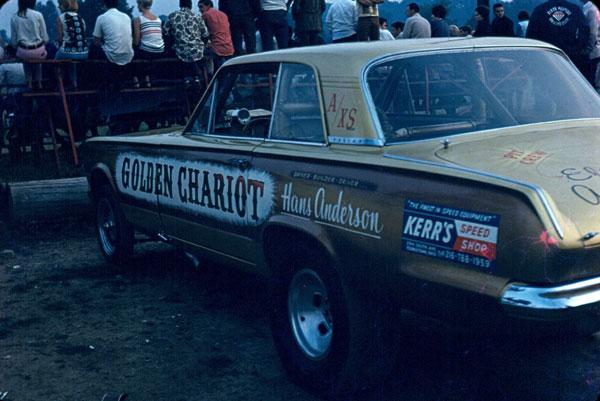 For a lot of SoCal fans, the John Kinsel-owned, Lorry Azevedo-driven Drummer Camaro is one of the first injected Funny Cars that comes to mind, and with good reason as the car ran hard and seemed to run everywhere. Bruce McClurg dropped me a note and some photos concerning the history of the car.

"The first photo (all photos are by Steve Reyes) are with the original paint, which was candy apple red with gold/orange trim. The second photo was around late '73-early'74 if I remember correctly with the flamed front. Lorry won the '72 Summernationals against Bob Durbin, driving the JEGS A/FC and setting the E.T. record of 7.34 (to the best of my memory) in the process. The car was converted to BB/FC in either late '74 of early '75. I worked for Lorry at his HAT Racing Enterprises in San Rafael, Calif., at the time. We met a lot of really great people while racing.

"The chassis was a Woody Gilmore, AA/FC-rated. I believe the body was from Fiberglass Specialties; paint by Don Kirby, Kenny Youngblood was responsible for the paint layout and detailing. Engine was a Keith Black 484 with Hilborn injectors, Crower clutch with a B&M Torqueflight. The rear end was the then -popular Halibrand quick change. The B&M just couldn't handle the power, we had to change them every third run, so a Lenco 3-speed was installed -- end of problem. I believe it was around '74 when a blower was installed and the car ran BB/FC. John eventually sold the car to Lorry who ran it for some time after."

California racer Dan Glover wanted to share the interesting story about his injected Vega wagon Funny Car that he ran in SoCal back in the 1980s which he believes wore an ex-Don Schumacher Wonder Wagon body.

"The two enclosed photos show two Funny Cars and may very well be the same car," he writes. "The only thing I can tell by the photo is whether or not the Wonder Wagon shown is the one that Kelly Brown drove. After some time after the Kelly Brown driven car finished its campaign the car was bought by Cragar and the body was set aside and another body was installed on the car which was the test car for the Cragar high pressure bottle in lieu of a normal blower. It never worked out as you might recall."

(I think that Glover is talking about the experimental car that Jake Johnston drove in testing in the early 1970s in which cold compressed air was injected into the engine in lieu of a blower. I remember seeing some photos of this back in the day. Anyway, his story continues.)

"I was looking for a Funny Car body and learned that an employee of Cragar had the Kelly Brown-driven Wonder Wagon body at his house. Long story short I bought the body from him. He was the son of [George] Cerny, the painter of many race cars of old, and had his own paint shop. I bought the body and a new paint job as a package and we retained the Kenny Youngblood graphics on the grill and lights. The body was originally built by John Buttera. Out in the sun and looking hard you could still see the Wonder Bread circles on the rear panels. I took some dimensions of the body and my partner Gary Bryngelson and I  built a new chassis to run  bracket races. It fit perfectly, even the cutouts for the roll cage. We mostly ran the car at OCIR and in the early days it was called the Blue Bitch (long story about that) and later we renamed the car Midnight Express We ran a 427 big-block Chevy with Hilborn stacks and a Turbo 400. Lots of fun. We never ran anything other than gas. In Funny Car style we had no suspension on the car and it worked really well. Larry Sutton commented that it was the hardest-leaving car he ever saw; I'm sure he meant with regards to bracket cars. We did need more horsepower since the body was over 350 pounds but we ran 9.30s and with the body off it ran 8.84."

OK, that's it for today. Thanks, as always, to those who have contributed, and for all of your memories and great photos. I know that very many of the photos that are sent are from personal collections and have never been seen before by the general racing public, so I appreciate you sharing them here. Have a great weekend. Me. I'm going to try to catch up on my phone calls!