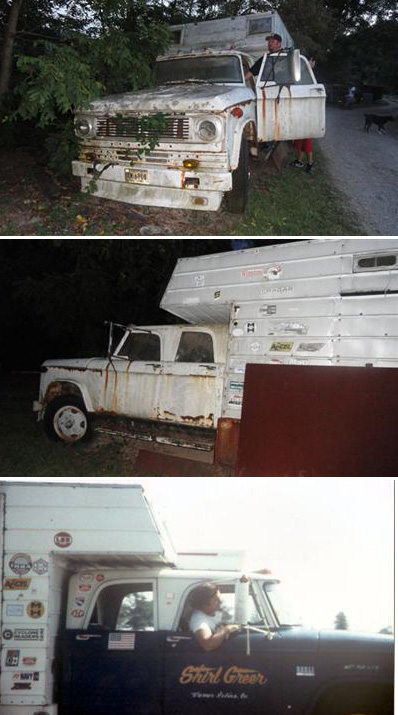 And the wheels on the ramp truck thread go 'round and 'round.

So here we are, columns later still talking about ramp trucks as this thing grows bigger and bigger tentacles, reminding many of the way that our wedge dragster thread spiraled out of control faster than you can say "Connie Kalitta at Indy."

Wiseacre Leigh Buttera, daughter of the late great "Lil John," cracked to me, "You know what I was just thinking? Wedge cars ON ramp trucks .... cool, eh? Just thinking." Now that's something I’d like to see.

Van Greer, son of late Funny Car champ Shirl Greer, picked up on a mention of his dad's truck here a few weeks ago and wanted to show off his and brother Brian's recent find, their dad's 1966 Dodge ramp truck.

"We found Dad's old truck that he had sold to a bracket racer friend of ours who quit racing 20 years ago," writes Van. "We found it only a mile away from home in the current state you see in the first two photos here.  It was great to see it again and think of all the great times we had in it. We found a tag inside it that said over 650,000 miles and still going strong.

"I remember many times we had to pull over on a trip and change a valve or a piston, Dad always had spares to fix anything on the truck; we usually could change a piston and be back on the road in a couple of hours — we had match races to get to and didn't have [Tom] McEwen's budget to get towed in (LOL). It was sad seeing the shape it was in. We are thinking of trying to get it and restore it if he will let it go."

Dave Christie, who later worked with the Sox & Martin team, knows that the whole hauler was in at least one accident, and the floor damage mentioned last week may not have come in the fender bender that Tom McEwen's team had. "The Dodge Clinic truck got the floor damage in a highway accident that occurred going from the AHRA event in Phoenix in the last weekend in January 1969 to Pomona for the NHRA Winternationals. The truck left after the Phoenix race and in the early morning went off the road into the center median east of Indio, Calif. You could not see the top of the truck from the roadside, but it stayed on the wheels with heavy front-axle damage. The '69 Barracuda (AM/P) barely stayed on the truck, but the roll bar was denting the top. The '69 Road Runner (BM/P) came off the trailer and had heavy front-end damage. Wiley Cossey went out with his truck and trailer and helped them bring down the cars, which were both badly damaged. The truck was towed a few days later to a truck repair center in Los Angeles. That is where I first met [Sox & Martin crew chief] Jake King, and by December of that year I went to work there with him. The two race cars were somehow straightened, repaired, painted, decaled, and lettered before qualifying and inspection the next weekend. A new Road Runner was borrowed from Haeffner Chrysler-Plymouth as a donor, and I think the carcass was still parked out behind Hooker Headers the next time we came back to town."

Stan Zigmont found this picture of Paul Smith's glass-sided ramp truck, which artfully combines the two running threads here about ramp trucks and glass-sided trailers. "This was in my dad's box of old drag photos, and I think it was from 1975, probably Englishtown," he informs

A few weeks ago, Todd Veney and some others had reminisced about his dad Ken's old black ramp truck, and Rona Veney sent me the only pic she had of the truck. Unfortunately, the pretty Veney's Vega is not on its back; fortunately, though, here's little Todd and sister Teri hunting for Easter Eggs around the truck April 2, 1972. Feel free to give Todd the business about this next time you see him. "The truck here is not completed," Rona notes. "Ken had red and yellow flames painted over the hood and coming back over the sides. Before we left for the 1974 Springnationals in Columbus, Ken had a 'convertible,' material with plastic (?) clear windows sewn in and zippers on the side."

Mr. Norm's Charger with the same "Boot Hill" motif as the Chi-Town Hustler, sent in by Al Booton.

Jim Millard sent in these two photos of two of Canada's major teams of the late 1960s and early 1970s. "Former Top Fuel pilot Scott Wilson (Time Machine SOHC Ford T/F) put the nitro away, and Ford of Canada gave him his own Performance Clinic in around 1969-70," he writes. "He had a Mustang Pro Stocker, plus I believe the other cars were all Stock and Super Stock classes. Lynda Pleva drove one of the cars for the team. Not a bad looking rig, eh? The other team was John Petrie's Chrysler Supercar Clinic, Canada's answer to Sox & Martin et al. John raced Mopars for years for Argyle Chrysler as the Canadian Highlander. His Pro Stock Duster made it to the late rounds at the Winternationals one year; broken porcelain on a spark plug cost him in the final. Who knows, he actually might have won! A couple of John's cars ended up with Beatty & Woods Racing and Mopar whiz Don Cloake."

Finally, a note from Mike Miller, who is Diane Sox's webmaster on the www.ronniesox.com website and sent along this trio of photos of Sox & Martin haulers over the years.