Just as the ramp trucks themselves passed into history, to be replaced by enclosed trailers, then fifth-wheel trailers, and ultimately 18-wheelers, so too must end (for now) the history of ramp trucks here. Oh sure, I could (and probably will) continue to receive images until trailers no longer have tires but float along on cushions of air on highways in the sky, but I thought I’d give this popular thread a massive send-off today.

It has been tremendous fun, and I've received tons and tons of thank-yous from the Insider Nation for looking back at this great period in our sport's history. As always, the plaudits really go to my readers, who supplied an unending stream of photos and stories from their personal archives, allowing many of us to see things we'd never dreamed of in images perhaps never before published.

On this page you'll find way too many photos, and your Web page probably won’t finish loading until 2013, but, hey, that's the price we pay for the history of the sport we love, right?

My quick count shows about 57 truck photos … damn, would have liked to have had 64. Wait … 64 ramp trucks! This Tuesday night at DRAGSTER Insider Raceway. Tuesday, Tuesday, Tuesday!

OK, on with the show. Let's get to truckin'. 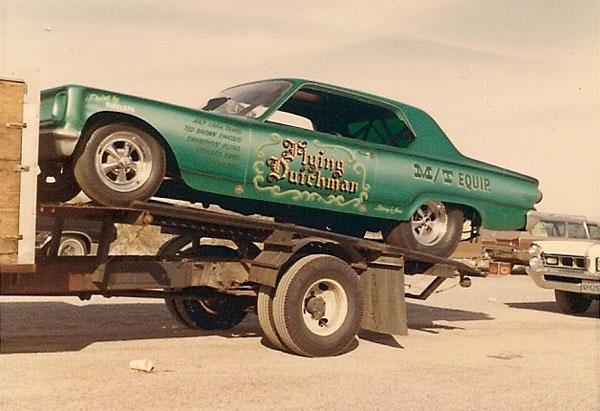 Jim Eshelman sent the following three images, which he took at his first AHRA national event at Beeline Dragway in early 1967. "I was 17 years old; man, how time flies," he wrote. This is Al Vanderwoude's famed Flying Dutchman. 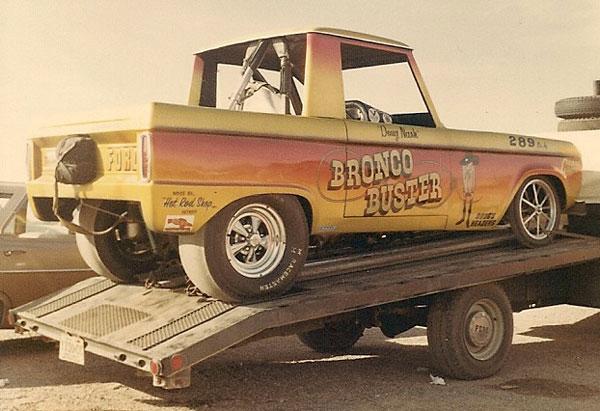 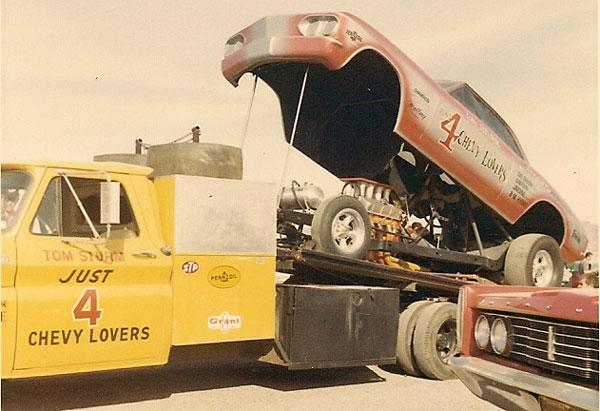 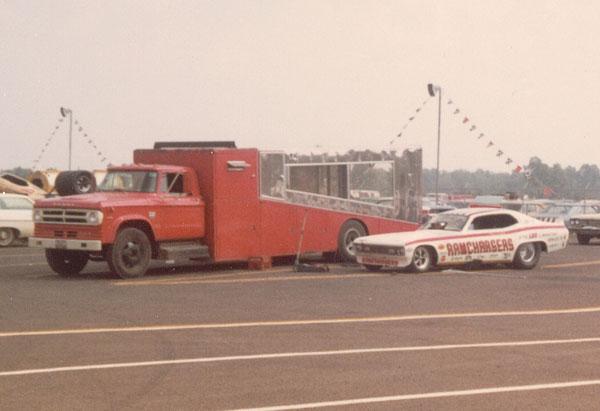 The next three shots come from the Kodak Duplex 126 of Ken Paynter, who took them at Niagara Int'l Drag Strip in the late 1960s and early 1970s. Here's the famed Ramchargers. 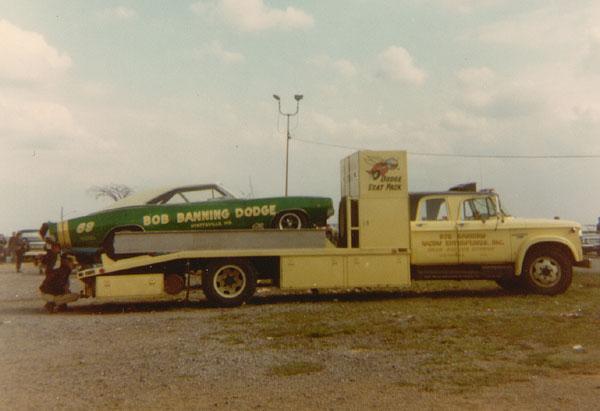 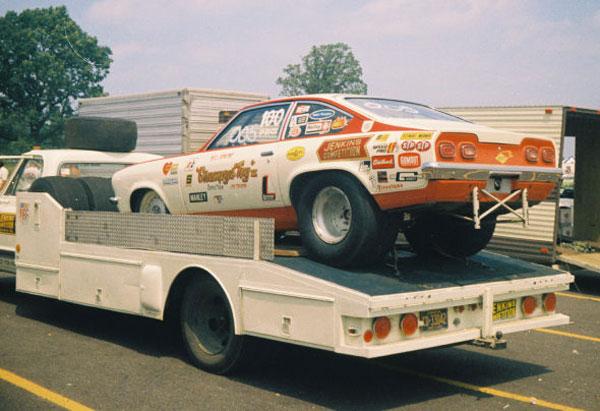 And the grumpy one. 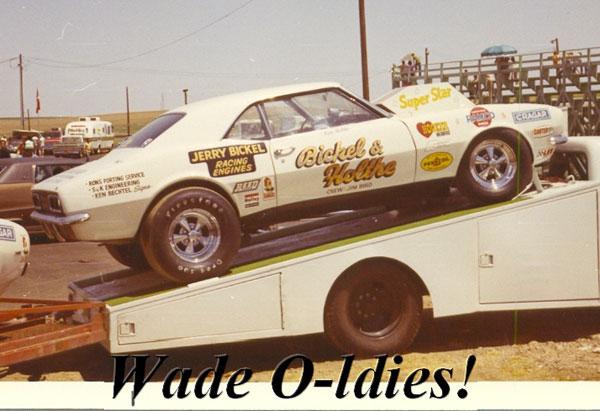 And you thought that Jerry Bickel only built cars. Scott Brown sent this shot that he found of Bickel's Camaro all ramped up. 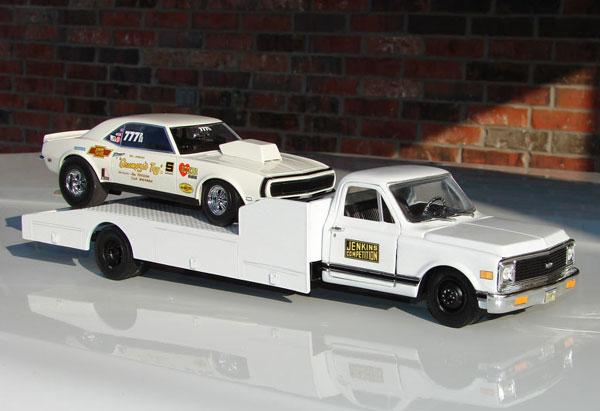 Brown also sent this great reproduction that he made of one of Bill Jenkins' operations. "I bought a cheapy diecast truck, then built the ramp bed out of styrene sheet," he wrote. "The wheels and tires are resin items." Pretty darned bitchn' there, Scott. 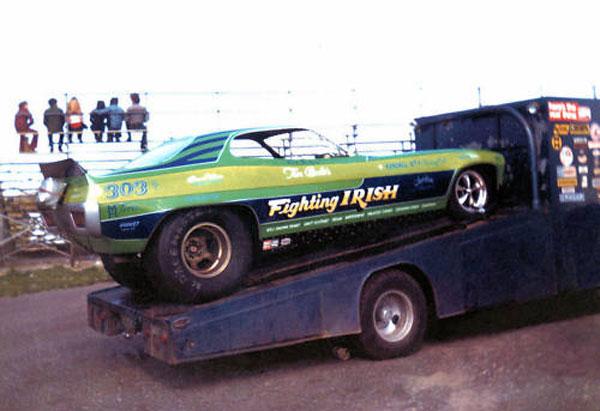 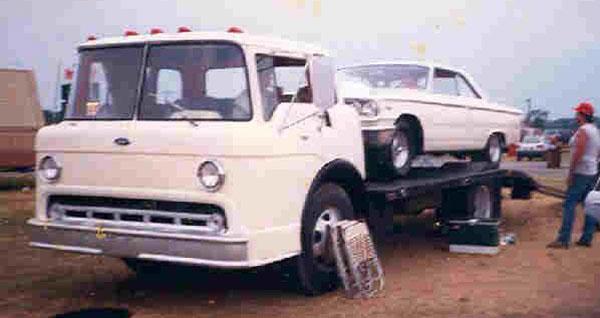 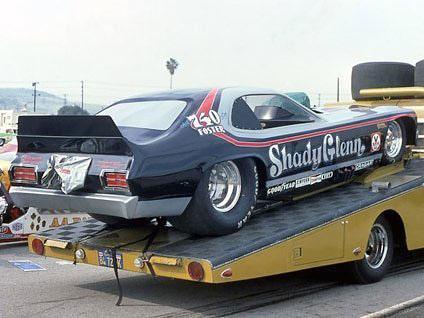 "Big Al" Liebmann of Team Frantic Ford sent this pic of the Shady Glenn flopper on the back of Goldy.

Wow, here's a great shot. Clinton Snead sent this photo of the ex-Richard Petty 43 JR. Barracuda, which by then had been purchased by Eddie Ratliff. "Maybe it's not a famous crew, but it is a famous car," wrote Snead. "The reason I have these pictures is because my dad, Larry Snead, actually drove this car for Eddie Ratliff a few times, and he is on the far left in this picture. One quick and interesting story about this truck: When Eddie acquired the car, he, of course, had to paint the truck to match. From what I have been told, they actually made a pattern from the '43 JR.' on the side of the race car and used that as a stencil to paint it on the door of the truck. No vinyl wraps in those days!  And yes, I know this is more of a flatbed truck, but I still thought it would go with the theme."

Longtime Texas fuel racer Bobby Rex, who has just completed a new version of the Mexican Revolution Vega on which he wrenched for Johnny Valdez, sent this photo and tale of woe from their touring days. "Johnny and I were booked in at a Funny Car show in Odessa, Texas," he wrote. "I think about 1973. We were in the staging lanes, about the third back. It was cold and cloudy. The pair that had run before us came to the staging lanes and told us that it was snowing in the traps. We all laughed and didn't pay any attention. Within five minutes, we were all trying to load our cars on the trucks in a light snow. Before we could get out of the gates, it was snowing. The temperature dropped 20 degrees in about 30 minutes. This picture was taken at the motel. We all drove home in the snow." If you look close enough, you can see the snow whipping past the car at a 45-degree angle. Cool! I mean, cold!

Wow, talk about good timing. Bobby Starks sent this photo, which shows "Big Mike" Burkhart's fuel-burning Chevy II. You probably can’t read it on the rear quarter, but the name there is Harry Schmidt ... yes, THAT Harry Schmidt. Before he created the Blue Max, Schmidt teamed with Burkhart in 1966-67 on this car. I know this only because I have penned a Blue Max history story for this week's Pure Nostalgia column in National DRAGSTER. A week ago, I might not have known that.

Last fall when Dale Adams was hunting for a ramp truck, he found a couple of interesting ones, including this gold Dodge that was for sale in Portland, Ore., but was originally from the Midwest. It had been restored yet still retained interesting decals on the windows, including class-winner stickers from Lions Drag Strip, York U.S. 30, Capitol Raceway, and Eldora Raceway and other period stickers.

Brad Barrie sent the above photo of the truck that he now owns when it was the property of the guy who also owned the '55 on its back and wanted to know if anyone knew of its roots. James Riola, who works for Kalitta Motorsports on Dave Grubnic's Top Fueler, is originally from California and believes that the truck and car belonged to a friend of his from the Canoga Park area. "His name is Guy Binko, and this car and truck were one of the staples of the bracket racing scene in Bakersfield from the '80s to the '90s," he wrote. I forwarded James' e-mail to Brad so they could figure it out.

Bob Snyder sent another boatload of his ramp-truck photos, which you can see below, but the above photo caught my eye as I was pretty sure that the Armstrong-Hoover-Larsen 'Cuda was one of Dale Armstrong's earliest cars. I dropped "Double A Dale" an e-mail asking for confirmation and identification of his partners. Although the first name of Mr. Larsen escaped Armstrong's memory ("He was a short-term partner for about a year or less."), Woody Hoover, who died four or five years ago, was a longtime Armstrong friend and partner who owned a drywall business.

"We built this car to run on the Southern California injected alcohol circuit," he reported. "It had a 511-cubic-inch big-block Chevy. About a month before the last race at Lions and just before they created Pro Comp, we put a blower on it and lowered the compression, and it ran under the NHRA classification of BB F/C. At the last Lions race, we ran in Comp eliminator, qualifying No. 2 by running .15-seconds under the existing NHRA BB F/C record."

I mentioned in a previous column that we thought we had a lead to find Armstrong's ramp truck, but the trail went cold. "Apparently, the fellow who had it sold it about five years ago and has no record of the sale. If you hear anything about a 1969 Chevy ramp truck with a Cadillac engine in it, please let me know. If we could find a photo that shows a license plate number, it would expedite the process."

And from our good pal in the Midwest and longtime National DRAGSTER contributor Tom Schiltz, here's this mini gallery.