Spaced out in H-town

Although I readily acknowledge that I have one of the coolest jobs in the world, the traveling part is not always all that it's cracked up to be. Because we're working on the current issue of National DRAGSTER through Wednesday night, we don't have much time for extracurricular activities when we travel to cover the national events. Usually it's an all-day flight Thursday, then straight from the airport to the hotel, a quick dinner, and then hit the rack. Then it's up and at 'em bright and early Friday, race all day, dinner, and the motel. Rinse, lather, and repeat for three days, then head to the airport early Monday, fly home, and if there's still time when you get home, maybe stop by the office and put in a few more hours.

Then there are rare times like yesterday. Our 6 a.m. flight out of Ontario got us into Houston at 11:30 a.m. and gave us a rare half day to ourselves. Houston, of course, is home to the Johnson Space Center, and because one of my travel mates, Associate Editor John Jodauga, is a bit of a space aficionado (an astronut?), we planned to drop by and take the nickel tour. 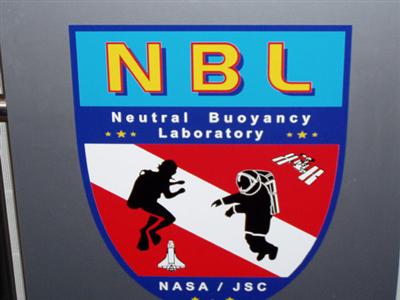 And then I remembered Reason No. 1,754 why I love writing this column: meeting people like Houston-area resident Todd Bailey. I first "met" Todd via e-mail in October 2007 after Wally Parks had died, and I met him for the first time for real yesterday, and boy was it a treat! Todd and I traded some e-mails about Wally and found out that, like me, he is a Comp racing fan, having grown up in the Houston area and watched the great Division 4 Modified wars. He was a fan of the then-still-kinda-new Insider column, but it turned out that he had followed my writing since the days of driving Frank and Linda Mazi's blown Opel back in the mid-1980s.

I noted his nasa.gov e-mail address and asked about his line of work. He invited me to stop by and visit him if ever I was back in Houston to show me firsthand what he does, so 18 months later, I got the chance to take him up on his offer. This edition of the Insider is going to vary a bit from the usual drag racing history lessons because I thought this was really cool, and I think you will too. Plus, hey, it's my column. 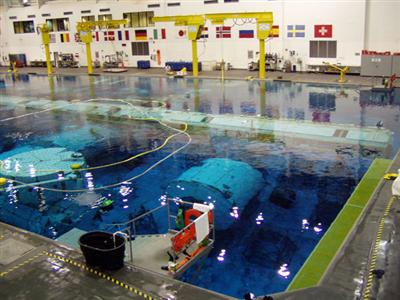 We met Todd, a 20-plus-year NASA veteran, at the Sonny Carter Training Facility, just down Space Center Boulevard from the space center. The training facility is home to the Neutral Buoyancy Laboratory (the NBL, as insiders call it), a 40-foot-deep water tank about 202x101 feet filled with 6.2 million gallons of chlorinated water so that astronauts can practice "extra vehicular activities" (EVAs, in the trade, or space walks to you and me) in a full space suit in relative simulated weightlessness. The pool is filled with mock-ups of everything from the cargo bay of the Space Shuttle to the still-growing International Space Station, which is updated in the pool as it is in space so the astronauts are training on the real deal 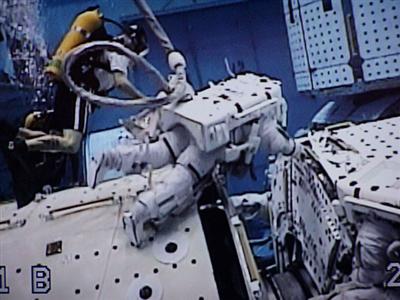 Todd, who started at NASA as one of the very safety divers he now helps oversee (back when the NLB was known as the Weightless Environment Training Facility) and has had experience in NASA's fabrication shop, is a safety test officer, which means he's charged with monitoring the astronauts' training "runs," allowing them to practice the actual jobs that they will perform for real in space on their shuttle missions in the not-too-distant future. It was fascinating and amazing at the same time. 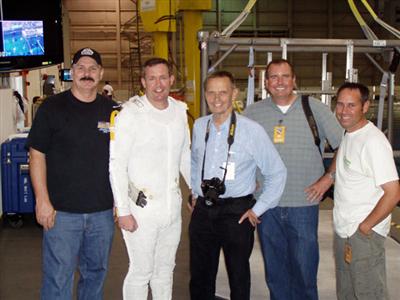 Todd had scheduled our tour so that we could see some astronauts at work in the NBL, then for us to meet one of them, shuttle veteran Michael Foreman, a Navy captain who flew on STS-123 (Endeavor) in March 2008 and will be headed back to space this November aboard STS-129 (Atlantis). The mission will focus on staging spare components outside the International Space Station and include at least three space walks. Foreman hails from Wadsworth, Ohio, originally made famous by the Veney family. 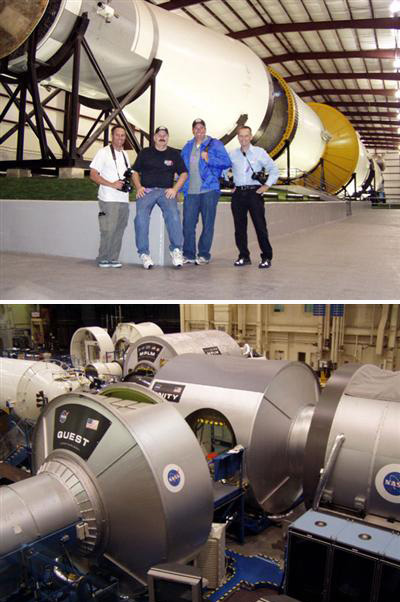 From the NBL, Todd took us into more secure areas of the Space Center, including Rocket Park, which houses a full-size mock-up of a Saturn V rocket of the type that carried the Apollo missions to the moon. You really don’t get an idea how big this monster is watching it on TV, but laid on its side inside a specially constructed building, its scale is amazing. It's a full 36 stories tall and then some.

While we were ogling Saturn V, a heavy, heavy rain began to fall – part of a 2.5-inch downpour that doused the area – and we slogged our way back to the rental car and to our final stop (well, other than a Mexican dinner at NASA hangout Don Pico's), the Space Vehicle Mockup Facility, where astronauts learn how to work various hatches, airlocks, and other components. They had three Space Shuttle simulators, and had not the current shuttle mission not been under way, we could have experienced them, too, as well as a visit to Mission Control (as Lloyd Bridges might have said in Airplane, "looks like I picked a bad week to visit NASA"); that will have to wait until next year.

All in all, a super day. A big thanks to Todd for his hospitality. Look for him on the track later this year once he gets his new Stocker built.

My trips to Houston haven't always been so pleasant. Just one year after history was made at the 1988 event with the first four-second Top Fuel pass at an NHRA national event, the track earned another distinction: hosting the first event ever to be "colded out." The weather got so cold that the event actually had to be postponed one week because it simply was too cold to run race cars. I'm not talking that it was 50 degrees; I'm talking single digits.

We had come to the race knowing it would be chilly -- I even had the foresight to pack gloves and a wool cap – but none of us was prepared for what happened. It was late Saturday afternoon when we heard that a strong cold front would be racing toward us from the north. It was about 50 degrees or so, and we were all bracing for a chilly final qualifying session when the thermometer nosedived 15 degrees in just a few minutes and more than 30 in a few hours. Before long, the wind kicked up, and the wind chill, according to those in the know, dropped into high single digits. How cold was it? Veteran photographers Dave Kommel, of Auto Imagery fame, and Jon Asher, whom we'd never seen wear anything but shorts to the starting line despite cold, rain, and wind, actually buckled down and put on some long pants. Now that's cold!

The Funny Cars came to the line, and the track was a veritable skating rink. Only a few cars were able to hook up despite tire-melting burnouts and a constant application of torches by the Safety Safari. Don Prudhomme, who qualified No. 1 with the first 5-teen in Funny Car history (5.19) but didn’t make it down the track in that frigid session, explained succinctly, "The motor said, 'Let's go,' and the tires said, 'Bulls__t.' "

Mark Oswald, driving the Motorcraft-sponsored Candies & Hughes Probe Funny Car, wrote in his On the Run column in National DRAGSTER, "I would have traded Motorcraft and [all their many other sponsors] for a product-only deal with a thermal-underwear supplier. … When the cold front moved through, the temperature dropped so fast I thought I had died. I believed for a moment that rigor mortis was setting in."

The end came when Jim White grenaded an engine in the Hawaiian Punch Dodge and the slick stuff just kind of congealed there on the track into a thick grease-like substance, trying its darndest to freeze. The Safety Safari made attempts to clean it up, but it was clear that wouldn't be an easy task. We called it a day and headed for the hotel.

I peeked outside the hotel-room window the next morning, and the cars were all frosted over. We turned on The Weather Channel and were greeted with the screen at right. It was on the verge of snowing – and, in fact, had snowed a bit locally – and the temperature was 32 degrees but a mere 3 degrees with the wind chill. We drove out to HRP anyway, knowing that the day was lost.

Coming back the next week was, in retrospect, well worth it as Scott Kalitta scored his long-overdue first win – and his only one in Funny Car, defeating Bruce Larson in the final. Gary Ormsby won Top Fuel,  and Bob Glidden bagged Pro Stock. A young Top Alcohol Dragster driver named Cruz Pedregon won a special Alcohol Showdown event.

Three years later, I witnessed more of Mother Nature's fury in Houston as the region was pounded with rain. We flew in Wednesday and met the tail end of a storm that dropped nine inches of rain on downtown H-town in six hours.

We all but had to wade to our rental car and joined a slow procession of cars out of town. Many areas of the freeway were flooded clear over; it was a good stretch of highway where only the slow lane was underwater. Low-lying local businesses along Interstate 45 were up to their windows in water. More than 1,500 homes were flooded. I-10, the nation's main east-west thoroughfare, was underwater as well, and one person died in the flood that day. Many, many hours later, we reached the hotel and were glad to see that the event had not been cancelled. Baytown had received its fair share of the wet stuff that made the grounds pretty soggy, but NHRA officials devised a scheme to get cars into the grounds on a staggered schedule, and those who lost were asked to quickly load and leave the pits to make room for the next class.

We dodged rain showers all weekend but got it in and made some history along the way. For the first time in NHRA history, women qualified in all three Pro classes as Kim LaHaie made the show in Top Fuel, Paula Martin qualified for Funny Car, and home-state heroine Lucinda McFarlin made the cut in Pro Stock. That guy Cruz Pedregon, who won the Alcohol Showdown three years earlier? He won Funny Car and ran the class' quickest e.t., 5.10. Mike Dunn took a shot at the 300-mph barrier that fell two weeks later in Gainesville and ran 297 mph in Jack Clark's dragster.

As you can see, my history with Houston has been interesting, to say the least, and I'm looking forward to even more rocket-like blastoffs this weekend.

Houston, we are go for launch!