In the last couple of years, Don Prudhomme has amassed a pretty good collection of the cars that made him famous throughout the years, including the yellow and white Hot Wheels Barracuda Funny Cars, U.S. Army Arrow, Pepsi Challenger Trans Am, and two Skoal Bandit Trans Ams, and as cool as it is for "the Snake" to have these genuine restorations (as opposed to "repopped" replicas), he has gotten more enjoyment from the recent restoration of a vehicle that he probably spent more time driving than any of his floppers: the '67 Dodge D700 truck that hauled his original Hot Wheels Funny Cars when he and Wildlife Racing partner Tom "the Mongoose" McEwen were barnstorming the country.

Although Funny Car-toting ramp trucks were plentiful in those days, the D700 was a step beyond most, from its crew-cab layout to overhead tire storage and lockers. Prudhomme's truck was used for two years by NASCAR legend Richard Petty before Prudhomme, who was seeking a quality ride to complement his new sponsorship, obtained it.

"There were a lot of ramp trucks around, but we wanted something special," he recalled. "The truck was part of the introduction of the Mattel Hot Wheels team, and we wanted some really nice trucks. I always liked to have nice equipment, and, at the time, it was the nicest there was. I really liked it back then because it was a good-looking truck, and I drove it a lot; Bob Brandt and I spent a lot of time going up and down the highway in it.

"I don't want anyone to think I'm getting soft here because I still love my U.S. Smokeless Top Fueler and I've never really been into being nostalgic, even though I've kept quite a few of my cars, but for guys like me who have been around for a while, it's neat to be able to keep or find some of your cars from over the years, especially from your beginnings."

Although Prudhomme certainly has a fine fleet of his former floppers – and just got back the '73 Vega that kicked off his U.S. Army sponsorship (and proved too heavy and was quickly sold to Tom Hoover) – he got the hankering to add this special piece to his collection.

"I dig my racing today and try to stay on top of everything, but I do enjoy going to the reunions, but what tops it off for me is to see a restored car and the truck they used to run it with," he said. "That’s what turns me on about it. The equipment has a lot of personality of its own, and the trucks were part of the show. When McEwen and I used to pull into the tracks, the fans would see those trucks and just surround us."

While going through some old paperwork – Prudhomme's wife, Lynn, is extremely organized – the Prudhommes came across the old bill of sale for the truck. The invoice had the truck's VIN on it, and Prudhomme and crewmember/ace restoration guy Willie Wolter found the truck, surprisingly still local to Prudhomme's former San Fernando Valley haunts.

"It never left California; we found it in Pacoima," said Prudhomme, who admitted he almost didn't wind up with the truck. "It had been through a couple of hands, but the guy knew that it used to be my truck, and he wanted a whole lot of money for it. Willie and I drove out there to look at it, and, my god, I didn't even recognize it. The guy told me it was cherry and that it ran and everything, but that wasn’t really the case. I first just walked away from it because I didn’t want it, but I was talking to Dale Armstrong about it later, and he told me, 'You've gotta get it; it's the only one like it left.' So I hired a wrecker and got it towed down here [to the team's shop in Vista, Calif.]. We had it dropped off at Rolling Wrenches to do the mechanical work for us, and then we did a total frame-off restoration."

As he did with all of the restorations of his race cars, Prudhomme put Wolter on point, and they hired a small staff to help with the enormous project. The truck originally had been painted yellow with stars to match the first Hot Wheels 'Cuda, then painted white with flames to match the Snake II 'Cuda, but Prudhomme chose to restore it to its original color. Using historical photos for reference, the now out-of-stock decals were painstakingly painted

"It had a lot of rust, but not to the point of being ridiculous and not being able to be restored," he said. "Willie is responsible for getting it into the great shape it's in. 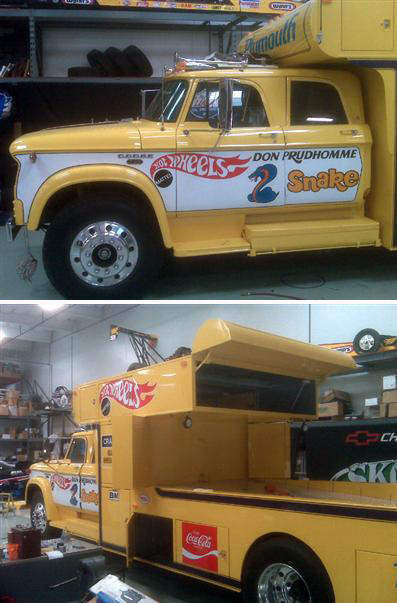 "It took a year, but it seemed like five years because it was being worked on pretty much every day," he said. "It's been a fun project. I've enjoyed it more than all of the other car projects we've done, but I won’t do it again; trust me. It was a big project."

The restoration complete, I had to ask: What does he intend to do with all of these time machines? Does he envision a museum or a John Force-like display at his shop?

"I don’t plan on being a Garlits and having a museum, but I think it's cool to have this one back. I can’t wait to show this truck. It's gorgeous and pretty sporty looking with the car sitting on the back."