Al Kean has been a loyal reader of this column from the start and also of National DRAGSTER. The Canadian race fan might best be remembered by his fellow fans for grabbing this amazing photo of Don Prudhomme's Hot Wheels Barracuda soaring through the lights at Seattle Int'l Raceway's Hot Wheels Northwest National Open in 1971. Kean shared his memories of that magnificent memory with me in a past Insider column (scroll down to the middle of it).

Anyway, after seeing the recent columns here showcasing some of former Division 1 photographer Fred von Sholly's great East Coast pics, Kean thought he would like to share some of his stuff, too! As a teen living just across the border in Victoria, B.C., Kean had frequented the Northwest tracks such as Seattle and Puyallup beginning in 1968 at the suggestion of his older brother. Even after moving some 500 miles north to Prince George, once he got some wheels, he began making the long trek south for the drags.

This last Christmas, while digging decorations out of the closet in his basement, Kean came across a box of slides from back in the day and had them scanned and placed on a CD, which he proudly sent to me with an index document seven pages long detailing the whos and wheres of the more than 300 images.

What's really cool to me about these images is that they are true fan photos, shot from the fences and grandstands and wherever Kean could get a decent line of sight on the cars (although it's clear in some of them that security may have been a bit lax in letting him get closer than most fans on occasion!). They remind me a lot of the photos I grabbed at OCIR and Irwindale – lots of shooting around heads and poles, some unfortunate misses (focus, frame), but some real gems, too. I've taken the liberty of cropping some of them for your viewing pleasure and left others as is. So, before we put the 2009 Seattle event in the rearview, here are a dozen images and a look back at Seattle from more than 30 years ago.

Kean got down as far as the guardrail for this great shot of Kenny Achs in his Black Sheep Challenger and Jerry Ruth in his famed Pay 'n' Pak Mustang laying down side-by-side smoky burnouts. The guardrails at Seattle in the early 1970s were set back from the track, allowing shots like this. "Looking at this picture makes me miss the smoke coming out of the side windows," Kean wrote. "That was cool." Indeed. 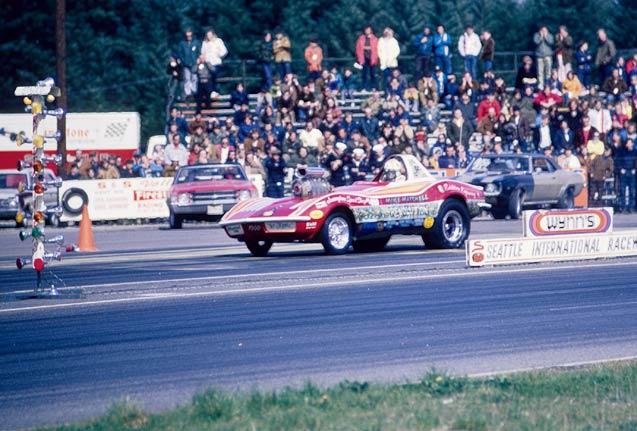 While Ed McCulloch had the Revell-sponsored Revellution, Mike Mitchell had the unsponsored Revolution BB/A Corvette. I've left this one cropped kind of wide and tall to show you the stands that are still there at what is now Pacific Raceways and the fir trees behind them and with the foreground to show you Kean's spot along the fence behind the guardrail. Mitchell went on to race nitro Funny Cars and was best known for the appellation that adorned his car: World's Fastest Hippie. Far out, man.

Speaking of McCulloch, here's one of "the Ace's" earliest floppers, the Whipple & McCulloch Duster. Art Whipple, who years later made a name for himself again with his Whipplecharger screw-type blower, campaigned this car with McCulloch in 1970 until it was lost in a trailer fire. They finished the season with a Barracuda. The Revell deal would come at the end of the 1971 season.

Here's Prudhomme, preflight, at that infamous 1971 Seattle event with a pretty burnout from the white Hot Wheels 'Cuda. According to Kean's story about that wild day, Prudhomme had run a 6.62 the weekend before at OCIR (funny … that's not even a great Pro Stock run today) and was gunning for the first 6.5-second pass in the final round against Dave Condit when all hell broke loose.

Kenney Goodell was one of the Northwest's early Funny Car stars and went by the nickname "the Action Man," and this photo is proof. At the 1972 Northwest National Open, Goodell's Duster launched into this wheelstand, and, according to Kean, he then lost control of the car and slid it into the grass alongside the track but missed the guardrail. "He cleaned up the car and came back the next day and won the event," noted Kean. According to my records, he set the national record the following month in Spokane at 6.58.

From the 1972 Northwest National Open, here's Larry Hendrickson burning out in John Blanchard's front-engined, wing-sporting Gladiator Top Fueler. The car was known for its big top speeds and in July 1970 set the national speed record at 232.55 that stood for a year and a half until Tony Nancy ran 233.16 at Lions in January 1972.

If you squint and look at this car, you'd swear from its distinctive silhouette and front wing that it was "Big Daddy" Don Garlits' Top Fueler, and you’d be half right. Garlits actually built this Hot Wheels dragster for "the Mongoose," Tom McEwen, for the 1972 season. As you can see from the car in the background, this still was the transitional period when front- and rear-engined Top Fuelers co-existed. And, hey, dig those cool Coca-Cola pants on McEwen's crewmember.

This photo was taken April 27, 1975, at the Northwest National Open at SIR and offers a little piece of drag racing history. That's Northwest veteran "Gentleman Hank" Johnson and his Mr. Auto Supply Top Fueler putting a holeshot on Jeb Allen to win the first all-five-second Top Fuel pairing, 5.99 to 5.95. Johnson is also the subject of this week's NHRA.com/Auto Imagery Photo of the Week.

This great photo was taken the same day as the one above and shows the wild Funny Car final between Bob Pickett in Mickey Thompson's unique U.S. Marines Grand Am and McCulloch's Revellution Dodge. Pickett launched M/T's Pontiac into a wheelstand, and the hard landing (note sparks under the car) unlatched the body, which came flying off.

This is "230 Gordie" (he wouldn’t run 240 for a couple of years) Bonin at SIR at that same 1975 event. I drank Bubble Up in high school in the mid-1970s, so Gordie Bonin's Funny Cars were always a favorite. Imagine my delight when, less than a year into my service here, Bonin became a co-worker when he accepted the job as marketing services manager right around the 1983 Winternationals. We worked together for six years before he moved on, but we stay in touch. Lately, we've been working together again – along with several others – to get his former boss, Roland Leong, inducted into the Hawaii Sports Hall of Fame. As another former Leong driver, Ron Capps, commented when I told him of our plans, "That's a no-brainer." Agree!

Here's another Northwest favorite, Twig Ziegler in the Pizza Haven Satellite. Ziegler's cars were always good-looking, and he recently re-popped one of his earlier cars, the all-orange Pizza Haven entry. Pizza Haven was one of the first pizzerias in the Northwest. The original outlet was a favorite of University of Washington students beginning in the late 1950s, and the chain eventually grew to 42 stores before competition and bankruptcies reduced it to one location by the late 1990s. It relaunched business in 2001 as a franchise operation.

And finally, there's this. Our Wild Rides Photo Greats book had the starting-line view of Jerry Ruth's skyscraping wheelie in his Competition Specialties Top Fueler during qualifying at the 1977 Fallnationals, and here's Kean's view from the finish line. I've inset the wheelie into the bigger photo, which shows Ruth, sans both front wheels, crossing the finish line, accompanied by one of the wheels bouncing merrily along next to him. Recalled Kean, "I watched him get out of the car very calmly. It didn't seem to bother him at all. Man, that guy could drive a race car." Ruth repaired the damage and was back in competition the following day.

Okay, those were some pretty keen Kean photos, eh? Thanks for sending them in, Al!