As you can see, the reports of this column's demise have been greatly exaggerated, but Wednesday's April Fools' stories here on the big .com (more on them later) not only continued an online tradition dating back 10 years but also an NHRA Publications tradition that goes back to 1970.

Bill Holland, a regular contributor to this column and National DRAGSTER editor from 1969 through 1974, was the early mastermind behind the section, which typically was four pages stuffed casually into the later pages of an early April issue. I heard Tuesday from some of you veteran fans out there who remembered the Natural Digger version, which was from 1974 and is featured in the gallery at right, kicked off with Bill "Grumpy" Jenkins' unforgettable bearskin-rug pose. Streakers were all the rage back then (kids, believe it or not, real grown adults used to take off their clothes and run nekkid at public events, streaking past unsuspecting spectators; I even remember seeing a quite-crazy motorcycle racer make a pass at OCIR in the buff), so the section followed that lead.

It also included some pretty funny ads, illustrated by current staffer John Jodauga, who worked for ND in the 1970s before starting his own business in the 1980s then returned to the fold in 1993.

"It was a form of escape from the rigors of putting out a weekly newspaper," explained Jodauga. "Many of the paper’s regular features, including Bits from the Pits, Tech Forum, regular columns, etc., were rewritten in satirical form, and we attempted to capture the flavor of such publications as the original MAD Magazine and National Lampoon. Some racers, just because of their unique personalities, were often targets of the jokes, with Bill Jenkins being a primary example. We couldn’t pass up reprinting Jenkins’ centerfold from Hot Rod magazine one year earlier, which of course was inspired by Burt Reynolds' similar effort in Cosmopolitan magazine.

"Because Ed McCulloch had a reputation of settling disputes in a physical manner back in those days, it was only natural that we created an ad promoting his fictional martial-arts training center. And after Wally Booth switched from his longtime crewcut to a longer-haired stylized look after he obtained factory backing with American Motors, we couldn’t resist putting together an advertisement for a proposed 1950s-style hair salon that included some high-profile clients.

"While putting these issues together, it was always in the back of our minds what the reaction would be from then-NHRA President Wally Parks, who was still very involved in a hands-on basis in the production of National DRAGSTER. It was one of Wally’s favorite rituals to critique each issue the day after it printed with his familiar red Sharpie felt pen, with which he highlighted captions, portions of copy, photo selection, or any other area he felt did not serve the best interests of NHRA.

"To his credit, Wally never asked us to submit our April Fools' stories to him before we went to press, but within days after publication, there would always follow a sternly written, highly detailed memo in which he would vent his displeasure. I remember the memo for the 1974 issue very well, in which he correctly assumed that the Snot Line was Holland’s brainchild and admonished me (again and again) that the purpose of National DRAGSTER was not to glorify Bill “Grumpy” Jenkins.

"In today’s very PC world, don’t look for a revival of this format in the foreseeable future."

Recalled Holland, "We really had some fun. Jodauga was in the thick of it all, and some of his wacky drawings helped make it a popular feature. We wrote a gag story about a mythical Eldorado Nationals where Caddie owners converged on Lassiter Mountain Raceway to slug it out. Damned if Mike Jones didn't turn it into a for-real race at OCIR. And, of course, April 1 was also Steve Gibbs' birthday, and 'Big Hook' lent his mischievousness to our journalistic pranks.

"Jim Edmunds, who took over for me in mid-year of 1974, was not made of the same silly putty as some of us," said Holland. "Jim was the managing editor during my tenure, and his forte was to get DRAGSTER done and out to [the printer] as fast as possible. Myself and John were of a more creative mind-set, wanting to improve the product. Bill Crites, of course, had his hand in some of the foolishness, and Leslie Lovett was a more-than-willing participant.

"For sure, we pushed the envelope with Wally, but given the success we were having and the reception by the racers, he gave us our lead. We might have pushed it a bit once when we made ex-Top Fuel owner Bruce Wheeler , the closest thing to a hippie we could find, into NHRA's new 'Division 8 director.' I suspect he knew that since Gibbs was part of our merry band of pranksters 'Hook' would say something if things got really rank. 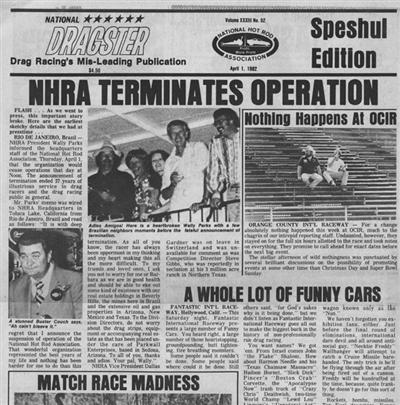 "All that said, I think Wally had a good sense of humor and really enjoyed some of the stunts we pulled. Even if he had to restrain himself for political reasons (around the house)."

Sadly for me, the final edition of the mini ND sections went to print six weeks before I joined the staff in May 1982 with a fake story about NHRA ceasing operation so that Wally and Barbara Parks could retire to Rio de Janeiro after amassing a fortune in oil and gas properties, diamond mines, and Beverly Hills real-estate holdings. It must not have played well (understandably) in the front office because it was the last one. I guess sometimes it's easy to go too far.

Did you guys catch the big brouhaha yesterday over the April Fools' story on the Car and Driver Web site? Basically, the staff, which also has been at this for years, posted a story saying that GM and Chrysler both had to leave NASCAR racing at the end of the season if they wanted to receive any more government assistance. Although NASCAR and the two manufacturers made no official statement about the story, which was hastily pulled after a furor arose, former NHRA Director of Media Relations Denny Darnell, who works for Dodge's NASCAR publicity team, was quoted in this FOXSports.com story.

Although I understand the sensitivity to the tough economic times, I thought that the C/D story was in line with a lot of the April Fools' stories being posted on other legitimate Web sites taking shots at everything from Microsoft to Google (Google Brain … LOL). There was a time yesterday when I began to wonder if the story about Summit Motorsports Park's proposed dome had fooled a lot of people because the phones started ringing pretty hard in some departments at NHRA.

Even if you looked past the obvious technical gaffes in the proposed dome – which was more like a tunnel than a dome – such as what would happen to cars in blowovers, how would the fumes be vented, how the tunnel would be kept clean enough for spectators to see through (not to mention line-of-sight issues for people downtrack (anyone who has ever sat "on the glass" at a hockey game knows what I mean), the sheer idea and the fact it would be ready for next year should have been enough to give people an inkling they were being had.

"I am a huge drag racing fan, but this is the stupidest thing I've seen in a long time," wrote one exasperated fan in an e-mail. "This is a testament to just how pathetic our country has gotten when we spend taxpayer money on something like this. I believe you will see and hear major opposition to this, including a backlash to NHRA."

Another fretted, "Even though the racing can continue during all kinds of weather, how many fans will hang in there during rain, snow, or etc. to watch the race? Besides the competition, etc., there are two components of the show that are fundamental to the experience of drag racing: the sound and the SMELL OF THE NITRO ... how much of this will be reduced or eliminated when races occur under the dome? Similarly, the dome will be like a greenhouse; won't it get mighty hot inside during the summer; how will this affect things like the drivers and traction?"

It was only after I responded to them and asked them to check the calendar did they realize they'd been had, which is probably a testimony not only to a sound idea for the joke – let's face it, people have been wondering how to build an enclosed racetrack since the first rainout -- but also to the exquisite photo illustration that accompanied the story. Both were the brainchild of the fertile mind of track publicist Jon Hedges.

"Each year, we try to come up with a wild April Fools' joke," he told me. "Last year as you know, it was John Force buying the track, and we still get questions to this day about it. In fact, the Web page with that story remains one of our most popular pages one year later.

"Bill Bader Jr. gives me great latitude to pull these April Fools' pranks off. I come up with the idea, write the story, and do the Photoshop work. Bill doesn’t even let the staff know what the prank will be until it shows up on the track’s Web site. I had the idea for the domed track worked out a few weeks ago and ran it by Bill on Monday.

"The 'dome' over the track started out as an image of a 20-foot-long metal garage/shed that I had to duplicate three times so it would stretch the entire length of the track. My original idea was to have it be solid metal (because how ridiculous would that be to have a race that you couldn’t actually see? At least with my warped sense of humor I thought that would be really funny), then at the last minute, I decided instead to make the shed transparent, which made it a little more believable. A lot of credit has to go to the Bader family, who all have a marvelous sense of humor and allow this sort of thing."

Only a few of you bit on my retirement of this column, but those who did were pretty pissed, which I find very flattering. TheNational DOGSTER and National CATSTER story drew some mild giggles, and though people told me they would actually subscribe to such publications, few were actually fooled. Ditto for the Tony Schumacher hockey story that ran in the Notebook.

There have been quite a few stories from years past that people really bit hard on, such as Top Fuel favorite 'Aussie Dave' exposed as native Southern Californian, which Grubnic told me he's still asked about; he also said he even got an angry call from a sponsor demanding to know why Grubnic hadn't told them about this deception ahead of time. NHRA changes Wally trophy to Kenny in salute of icon Bernstein had quite a few people riled up that NHRA was messing with the time-honored trophy, and even the ludicrous-sounding Schumacher admits: 'I drive with my eyes closed' had some takers. It's an inexact science predicting what plays and what doesn't but fun still to see what kind of reactions you can invoke.

Okay, that's all the foolishness I have time for this year; back to business next week with more great stories behind the stories.