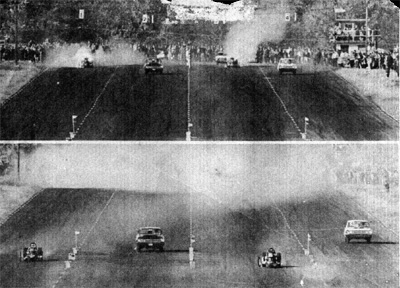 Explaining the basics of drag racing to your buddies down at the bar is pretty straightforward (pardon the pun), right? Two cars run in a straight line for 1,320 feet, right? Well, it wasn’t always two cars, as you’re about to read.

A lot of back-channel e-mail was traded after the passing of Ron Correnti last week, and memories were shared of the infamous four-lane racetrack in Byron, Ill., where four cars in the same class would face off. Correnti took part in this action, but in a wild combination concocted by owner Ron Leek that pitted two fuel dragsters against two Super Stockers.

Mark Pieri, who drove in Top Fuel, Top Gas, and Top Alcohol Funny Car and Dragster, took part in one of these wild matches, as depicted in the photos at right.

Pieri is in the far left lane in the Guzzler entry of Bud Roache and Don Mattson out of Chicago. Correnti is in the next lane in one of the Super Stockers; “the Greek,” Chris Karamesines, is in lane three with his Chizler; and Pieri thinks that's Ed Reshanski in lane four. The door cars got a flying start from behind the starting line, and the dragsters nailed it when the door cars hit the starting line.

“If memory serves me right, the door cars were staged 50 or 75 feet behind the starting line. The flagman waved one flag for them to start, and when they reached the starting line, he waved the other flag for ‘the Greek’ and I to give chase. It was an exciting race. We only did this one weekend, a two-out-of-three-type deal, and, fortunately, we didn't have any problems.”

Pieri recalls that he and Karamesines ran low sevens at 208 and 223 mph, respectively, and the door cars were in 140-mph range.

Pieri, the Top Gas winner at the 1966 Springnationals and a three-time Division 3 Top Gas champ (and multi-time UDRA champ), was a partner and driver in a Top Gas dragster from 1960 to 1971 and drove at match races for Roache and Mattson around the Midwest with the likes of Tommy Ivo, Maynard Rupp, Don Garlits, Bobby Walters, and “the Greek.” They also came west to Bakersfield, Calif., for the March Meet and to fabled California tracks such as Irwindale, Fontana, Long Beach, Carlsbad, Fremont, Riverside, and Pomona.

“I've raced on 11 different tracks in California and 65 different tracks in the U.S. and Canada,” he said. “In the late ‘80s, fear and common sense set in. I got out of the driver's seat and bought a cottage on a lake and never looked back. Fast-forward to 2005 and we re-created the 1966 Springnationals car, put it on nitro, and are having a ball cackling it.”

After my note about the great photo galleries from Bison Dragways, reader Allan Tucker of Summerland, B.C., alerted me to another great Canadian drag racing repository of history here. 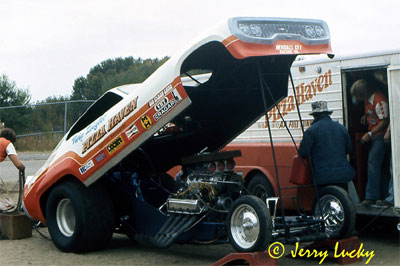 “I thought you would also enjoy this one from what used to be Saskatoon Int’l Raceway, or Southwinds. As you know, bookings for the ‘traveling’ racers were pretty few and far in Division 5 for many years. The distances were horrible, and, of course, there was always the border hassle for the U.S. guys. For many years, there was sort of an ‘agreement’ between Bison Dragways and Southwinds that their feature shows would be staggered so the racers would have sort of a circuit: Bison in Manitoba, Saskatoon in Saskatchewan, and whatever was operating in Calgary, Alta. Then you could swing back down to the States into Washington and then back to California … sort of like driving to the moon and back. The Saskatoon site has many of the famous dudes and a lot of mechanical detail in the shots. I should mention the great efforts of Darrell Zimmerman and the Division 5 crew of yesteryear, Kenny Arnold, LeRoy Collinson, and the bunch, to keep us all NHRA for many years up here.”

This is another wonderful site. There aren’t any captions or identifying info on the photos, most of which seem to have been shot in 1976, many by a talented lensman named Jerry Lucky, but any hard-core Funny Car fan should have no problem picking out Twig Zeigler’s Pizza Haven Satellites, Bill Spevacek, Bill Schifsky’s Beartown Shaker (Topper Kramer at the wheel?), Al Hanna’s Eastern Raider, Dick Custy, Dale Creasy’s Tyrant, Roger Lindamood’s Color Me Gone, Tripp Shumake in Dennis Fowler’s pretty Sundance Monza, “Mighty Mike” Van Sant’s Invader, Dick Bourgeois, Lil' John Lombardo, Mike Miller, Radici & Wise, the Green Elephant (Frank Hall driving?), Terry Capp’s Wheeler Dealer, and Junior Thompson. There’s also the Top Fuelers of Jerry Ruth, Gary Beck, Gaines Markley, Marvin Graham, Herm Petersen, “Backdoor Bob” Struksnes, Jeb Allen, Capp, plus the alcohol cars of Dale Armstrong, Ken Veney, Brent Bramley, and even Les Davenport’s squirrelly-looking Pinto. There are two different versions of “Wild Bill” Shrewsberry’s L.A. Dart wheelstander, Richard Schroeder’s Nova wheelstander, Ray Alley’s Age of Aquarius rocket dragster, and Tom McCourry in the ex-Ivo Wagonmaster. It’s packed with plenty of static shots that allow you to enjoy how cars used to look – Funny Cars with shock absorbers and with fire bottles mounted on the steering shaft, Top Fuel wings suspended on two spindly struts, etc., plus staging-lane and pit-area shots, plenty of images of crews pushing back their Top Fuelers, shots from interesting angles, including from inside the trucks as Top Fuelers were push-started, and more -- more than 1,000 pics in all. The fuel cars fill the first 10 pages (of 24), then there are lots of door cars. 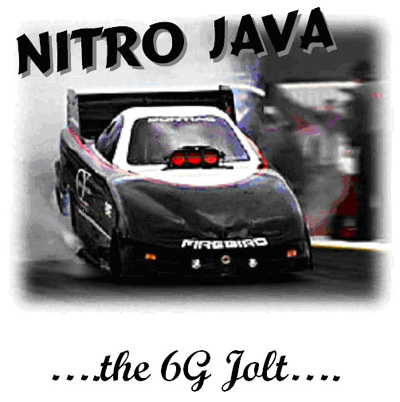 I received a lot of interesting feedback on my Memory Lane/Riverside Drive column (April 9), some from people who had heard about the old offices, but mostly drive-in memories inspired by my visit to the historic Bob’s Big Boy in Burbank, Calif.

Sam Sullivan was reminded of his first trip to Pasadena in 1957, to Henry's Drive-in in Pasadana, Calif., from Idaho. “Cruising street rods everywhere,” he recalls fondly. “I believe that Henry's was the inspiration for Arnold's on Happy Days. I especially remember being awestruck with the '32 Deuce coupes with 48 Merc flatheads with three Stromberg 97s with progressive linkage, '39 LaSalle transmissions driving nine-inch Ford rear ends, wide whitewall big and little tires and baby Moon hubcaps. To dream for. …”

Steve Vermillion can relate to the mention of my Diet Coke habit even though he’s in a different line of caffeine-fueled business at a small independent coffee company in Seattle, Martin Henry Coffee, which now brews a blend that should be near and dear to all drag racing fans -- Nitro Java -- to honor those who love racing. The Funny Car pictured on the logo is Randy Anderson’s old car.

Vermillion, who worked on sponsorship packages for Shelly and Randy Anderson after they lost their Parts America sponsorship as well as with a Pro Stock Truck team, reports that the new blend is “a medium roast of different coffee beans that provide combined layers of flavor -- rich and well-rounded, nicely balanced, low-end body, caramel-like sweetness, and a suggestion of black currant and chocolate. For some, this may be the 6G jolt they are looking for. For those who prefer a darker roasted coffee, we can provide a blend that is bold with a purpose, rich and weighty that provides just a spark of clear acidity.”

Coffee talk ... it has its own vernacular, just like drag racing.

Vermillion is also working on a way for sales of the new blend to support the Drag Racing Association of Women.

From the 'I-was-there' file: I heard back from Kalitta PR maestro Todd Myers about the infamous 1983 starting-line fireball in Englishtown (April 7 DI), and Scott K. verified that the engine hydraulicked at the hit of the throttle after Smart’s protracted burnout-backup-staging routine. And, contrary to other reports, Kalitta did have oil pressure.

Reader Todd Berube was in E-town that fateful day, working with the Bellboys BB/FC, whose trailer was not far from Kalitta’s. “A bunch of us headed that way after the semi's," he recalled. “When we got there, Connie was screaming and yelling at [crew chief] Ron Barrow about the upkeep of the cars. Ron stated that Connie had added a fuel car (Scott’s) and added no personnel. Then Connie headed over to Jody Smart’s trailer. Jody and [crew chief] J.E. Kristek met him at the trailer and said to him, ‘We told you our deal: long burnout, slow backup, because our fuel tank is not baffled properly.' Connie really flew off the handle then and said that if there were no one in Texas who could weld the [expletive] baffles in then give it to him and someone from Detroit would! Classic Kalitta.”

Steve Pramov was there, too, and remembers, “Kalitta was so hot when he got outta the car and stormed back to Buster I thought for sure he was going to take a swing at him. I had met Buster a couple of times, and I think as Kalitta approached Buster (a human mountain) and realized he was at a disadvantage, he decided to flap his jaws instead. Buster was a sweetheart of a man, but I guarantee Kalitta would have been on the losing end of that deal.”

I tried but couldn’t track down Smart, one of the true all-time gentlemen and good guys in our sport, to get his recollections. Hey Jody, if you’re out there, give your old buddy a call, y’hear?

Connell R. Miller was in Tulsa when Larry Brown pitched the engine out of his digger in the lights, as shown in Steve Reyes’ Five Favorite Fotos (April 4). “Tulsa was my home track,” he reports. “[I was] standing on the starting line and looking downtrack; it was quite spectacular, to say the least. I quickly made my way down to where a couple of friends were sitting, on the grass on the pit (left) side of the track, close to the finish line. An extremely hot part of the block had landed on a girl's leg about five feet from my friends. Of course, all the help was going past at a fast clip well beyond the finish line where the car finally stopped. Brown was unhurt in the explosion and had brought the car to a reasonably safe stop. The car was out of Oklahoma City, but the engine was owned by a Tulsan, the late Chester ‘Sarge’ Garris, who had a most shocked and sad look on his face as he rode on the back of a wrecker, holding on to the remains of the engine hanging from a chain. One look at that photo will tell you how violent that explosion was -- to kick the engine out of the car AND split it in two halves -- top and bottom!”

Garris, as faithful column readers may recall, was also the crew chief for Marvin “Who?” Graham during his stunning Indy win in 1974. Garris, who died last September, was remembered by Graham and others in my Sept. 13 and 21 entries.