Buckle up. This is where the ride gets a bit bumpy. The Countdown to the Championship playoffs for the NHRA Camping World Drag Racing Series is about to hit the halfway point with this week’s NHRA Midwest Nationals at World Wide Technology Raceway. Right now, all four Professional championships are very much up for grabs, but that might not be the case on Monday morning.
29 Sep 2022
NHRA National Dragster staff
Tricky Tipster®

Buckle up. This is where the ride gets a bit bumpy. The Countdown to the Championship playoffs for the NHRA Camping World Drag Racing Series is about to hit the halfway point with this week’s NHRA Midwest Nationals at World Wide Technology Raceway. Right now, all four Professional championships are very much up for grabs, but that might not be the case on Monday morning.

This week, Hight, Enders, and Gladstone are the favorites, while Tipster has selected Charlotte winner Antron Brown as the favorite in Top Fuel. 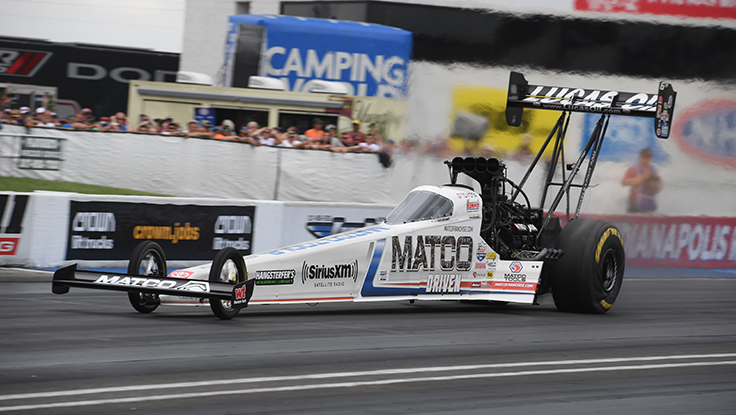 The favorite: If Antron Brown and the Matco Tools team can pull off a fourth championship this season, it will rank as one of the most impressive accomplishments in the history of the sport. After the Western Swing, Brown was buried in 12th place in the standings and appeared headed for a disappointing debut as a team owner.

Things can change quickly in this sport, and Brown has now won three of the last five races and finds himself just 43 points out of the lead. Brown has all the momentum in the world on his side, and his driving has been solid, even during his early-season struggles. It won’t be easy to pull off another championship, or even another win, but we like their chances this week.

The contenders: For the second race in a row, Justin Ashley is the championship leader, which is enviable, but it also comes with a lot of pressure. Losing a close final in Charlotte had to be painful, but certainly not as bad as an early loss. This car runs 3.6s whenever conditions allow, and that should be the case this weekend.

Brittany Force has been either a favorite or a leading contender at every event this year, and there is no reason for that trend not to continue. The Monster team tends to garner the bulk of the qualifying bonus points, but at this point in the season, they’re going to need to win some rounds to keep pace in the title hunt.

Mike Salinas has been quiet lately, but he finds himself just 54 points out of first place, which makes him a legit title contender. The Pep Boys/Scrappers team tends to take advantage of premium conditions, which should be present this week.

Finally, let’s take a closer look at four-time and reigning champ Steve Torrence. The Capco team is 105 points behind Brown, which makes St. Louis a nearly must-win event. At the very least, Torrence cannot afford to fall any further behind. A win here would likely be a season-saver.

The dark horse: He won’t win the championship, but Clay Millican might just have a say in who does. Since his team was acquired by Rick Ware Racing, Millican has shown significant improvement, especially in Charlotte, where they ran a string of 3.6s and made it to the semi’s. 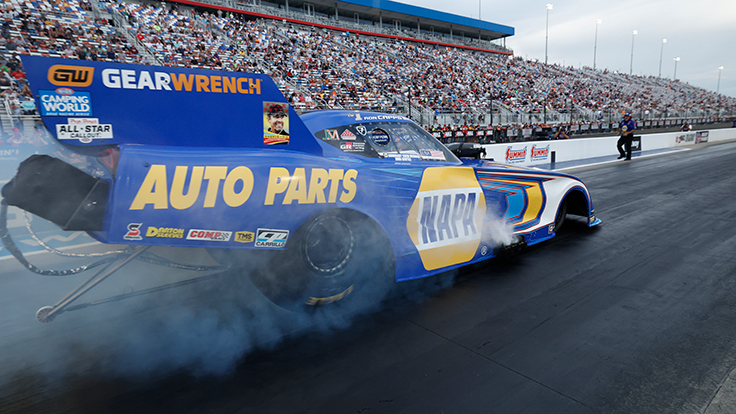 The favorite: We know that Ron Capps reads “Five Things We Learned” religiously, so it's likely that he’s also a regular visitor to Tricky Tipster, but that isn’t why we’re giving him the top spot this week. He’s earned it with a clutch win in Charlotte, as well as his recent Indy sweep. Capps still has some work to do in order to defend his 2021 title, but at this point, he’s just 27 points behind Robert Hight, who has won seven times in 18 races this season.

Capps and his NAPA team don’t generally light up the scoreboards with record-setting elapsed times or speeds, but it’s fair to point out that they’ve run 3.86 at the last four events in Brainerd, Indy, Reading, and Charlotte.

The contenders: If he’s not the favorite, then Robert Hight is certainly the leading contender, and with premium weather conditions expected in St. Louis, the Auto Club Camaro might just throw down a big number in qualifying. Hight lost a tough race to Alexis DeJoria in Charlotte, but the damage could have been worse. How he responds this weekend will make all the difference in the world.

Matt Hagan has been to the semifinals at the last two events, but to be honest, that might not be good enough to keep him in the championship battle much longer. Hagan is just 60 points out of first place, so he's got his fate in his own hands, but he can’t afford to let Capps and Hight get too much further ahead.

For the record, we’re also listing Bob Tasca III, J.R. Todd, and John Force as our favorites simply because all three are capable of winning and are overdue for some favorable results.

The dark horse: Perhaps dark horse isn’t the proper term right now, but we still think Alexis DeJoria has something going, especially after making the final round in Charlotte. The Bandero Toyota has been hit or miss this season, but one gets the feeling that they’re on to something good. With 129 points to make up, it’s hard to say she’s in the championship picture, but another big outing here might change that.

The favorite: OK, so she had an off race in Charlotte, but that doesn’t make Erica Enders any less of a favorite than she’s been at any other time this year. The fact is the Elite/Melling Camaro is still the best car in the class more often than not, and the same goes for Enders’ driving. It’s not that they aren’t beatable, it’s just extremely difficult to do so. Enders' lead has shrunk to 64 points over teammate Aaron Stanfield, but it’s still the biggest lead of any of the four NHRA Pro classes. A win here would do a lot to shut the door on the competition.

The contenders: As we noted last week, everyone else in the field is realistically a contender, but we have to single out a couple, so let's go with Stanfield, Troy Coughlin Jr., Dallas Glenn, and Matt Hartford, the Charlotte runner-up.

Stanfield and Coughlin have both had extraordinary seasons with multiple wins, but they’ve got their work cut out for them to catch or pass teammate Enders.

Over on the KB Racing side, Hartford has been amazing at times this season, but not as often as we’d like to see. Glenn remains one of the best pure drivers in the class, so he’s always a threat.

Oh, and we can’t forget reigning champ Greg Anderson, who often has the best car in the class but needs to get the clutch out on time in order to keep his title hopes alive.

The dark horse: Let’s take a shot in the dark here and go with rookie Camrie Caruso. We know, she’s been relatively quiet since her runner-up finish in Houston, but if you’ve been paying attention, her reaction times have improved dramatically this season. It would not be the least bit surprising to see Caruso put together a big finish to what has already been an amazing debut 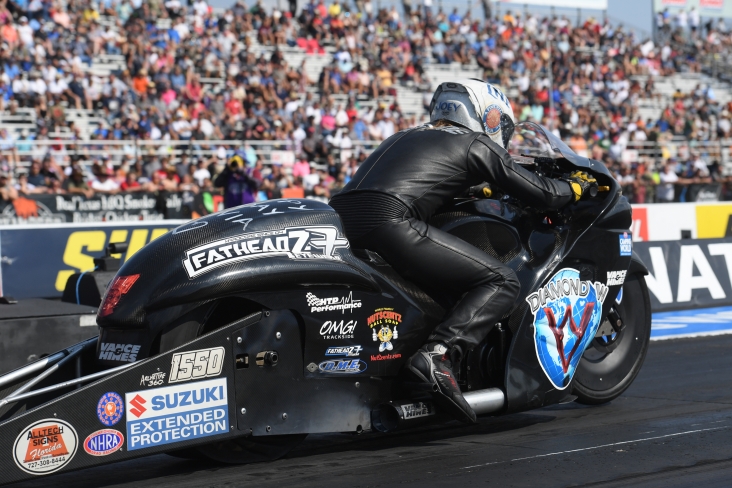 The favorite: This is a really hard class to handicap right now because no one has been able to seize momentum for very long. Matt Smith has been dominant at times, but for this week, we’re going to give the top spot to championship leader Joey Gladstone following his big win in Reading a couple of weeks ago. Gladstone struggled in Indy, which made some folks think he was going to fade. That clearly hasn’t happened. It isn’t an exaggeration to suggest that this is the best bike/rider combination in the class right now. In fact, Gladstone’s 2022 season is shaping up to look a lot like LE Tonglet’s 2010 championship campaign.

The contenders: Would anyone be surprised if Matt and Angie Smith pulled off an all V-Twin final round on their Denso Buells? Tipster certainly would not.

The Smiths are consistently quick and almost never bring an uncompetitive bike to the starting line. Matt is particularly savvy, which helps explain his five championships. He’s a little more than one round behind Gladstone, so he could easily leave the Gateway city as the leader.

Angie Smith hasn’t won a race in a while, but she’s been darn close, including a runner-up in Reading. She’s also just 49 points out of first place, which makes her very much a title contender. This race will tell us a lot about her chances going forward.

Finally, there is just 104 points separating the top eight riders in the class, so the championship is still very much up for grabs. Eddie Krawiec, Angelle Sampey, Steve Johnson, Marc Ingwersen, and Jerry Savoie are all in it, and all of them could benefit from a win here.

The dark horse: Karen Stoffer started the year off with a pair of 6.6-second runs on her way to a win in Gainesville, so where did that bike go? At times, she’s been very competitive, but right now, Stoffer is ninth in the standings and 116 points out of first place. That might be too much to make up, but if she can rekindle the early-season magic, another win is certainly not out of the question.