In 2002, Joey Severance reclaimed his position as King of the Hill and earned the fifth NHRA Lucas Oil Drag Racing Series Top Alcohol Dragster championship of his career in a category that is displaying increasing parity.
22 Dec 2022
Kelly Wade
2022 NHRA world champion

Not long ago, Joey Severance put forth a dominant performance that resulted in four consecutive championships; but from 2019 to 2021, the driver of the J&A Services supercharged Top Alcohol Dragster found himself displaced from the top spot. This year, Severance reclaimed his position as King of the Hill and earned the fifth NHRA Lucas Oil Drag Racing Series Top Alcohol Dragster championship of his career in a category that is displaying increasing parity.

“It’s definitely difficult; there are such great cars in the class,” said Severance, who earned six wins in nine final rounds this season. “It’s been a tough group, but it always has been. When it comes to [supercharged combinations] or A/Fuel, it really depends so much on the weekend, the weather, the track, and everything. There are times when one has an advantage over the other, but it seems fairly close. You’ve got quite a few that can step up at any time and beat you.”

The season started off on a promising note with Severance racing to the final round at the Lucas Oil NHRA Winternationals. 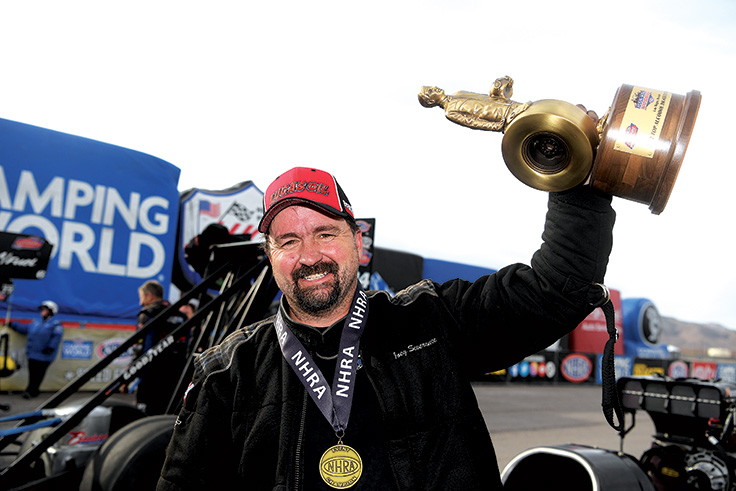 Not long after, he claimed victory at the NHRA Four-Wide Nationals in Las Vegas and ended a drought that had seen him winless at national events since 2018. Severance’s scorecard continued to glow as he added victories at the Las Vegas regional event and the NHRA SpringNationals in Houston, where he defeated Julie Nataas and Randy Meyer Racing, the team that has won the three most recent championship titles.

“After we won those three races in a row, I starting thinking maybe we had a shot at the championship,” said Severance, who locked down national event win No. 25 at Houston Raceway Park. “But I don’t know that we had as much of a shot to win it as we had a shot to screw it up. We started out really good, but then we lost first round at four national events [almost] in a row. Charlotte was a big turnaround for us.”

Although Severance did not claim points at the Betway NHRA Carolina Nationals and exited in the first round, the team utilized their time on track to put a few things to the test. Those experiments showed promise and brought about a renewed outlook as they ventured to World Wide Technology Raceway Park.

After missing the first regional race at Woodburn Dragstrip — the racetrack owned and operated by his family — and then painfully failing to qualify at the second one, Severance decided to claim the regional competition in St. Louis. Fatefully, he won the event and stayed alive.

The championship came all the way down to Pomona, and entering the final race of the year, Severance was in a familiar position. He was well familiar with winning a series title, but several times before, he’d barely missed it in the last few moments of the season. The veteran racer refused to let negative thoughts cloud his vision, though, just as he didn’t let the dry spell in the years before negatively impact his experience.

“I just don’t let these things bother me,” he said. “I’m pretty good about forgetting stuff – you can ask my wife about that. I let it go, because a lot of it is just being there with family and friends. The racing part is a big bonus. We want to win, that’s what we’re there to do, but if we don’t, it’s not the end of the world. There are other things that can make you happy, too.”

The J&A Services team was plenty pleased in Pomona. It was in the second round of eliminations that Severance defeated Matt Cummings soon after Madison Payne shut down Jasmine Salinas, sending the remaining two championship hopefuls home. Just like old times, the Top Alcohol Dragster title was going back to Woodburn Dragstrip with Severance.

“When Madison won that round, that took the pressure off,” he said. “She did good in the points and helped us out, beating Jasmine a couple times. Duane Shields [Payne’s car owner] came by and said I owe him a big bottle of something, and we probably do.” 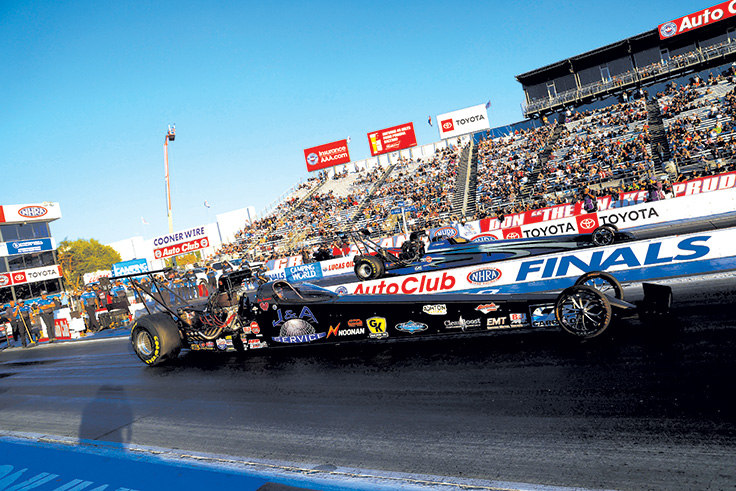 In a powerful final performance of the year, Severance zipped through eliminations with one of the most efficient cars in the field. He was second quickest in the first round with a monstrous 5.211-second pass at 275.45 mph to defeat Casey Grisel, and he was again second quickest of the round with a 5.233 to top Cummings in the second act. For his semifinals showing, Severance utilized a best-of-the-round 5.214 to top Garrett Bateman and gain a ticket to the final round. There, he fell to fellow supercharged competitor Taylor Vetter, who claimed her first national event win in dramatic fashion.

“It was going good other than I lost,” said Severance, who explained that they broke a blower belt and slowed before watching Vetter’s dragster get out of the groove, get back just enough to illuminate the win light, then go over on its side and grind to a stop in the shutdown area.

“It was a little surprising to see the top of her wing go by me,” he deadpanned. “But even though we lost, our car is running pretty good. A few little hiccups, but I feel like we got our tune-up pretty much back. We can do pretty decent next year. We’re going to try anyway.”

With the season wrapped, Severance reflected on the contributing factors in his return to the top.

“It just comes down to a lot of work by my dad [Joe] and a lot of luck,” said Severance. “No one really ran away with it this year. With the way the car was running at the end of the year, maybe we did deserve this after all. Next year, we’ll try for six – but if it doesn’t happen, at least we were able to try. We’re not smart enough to quit.”