A determined Erica Enders meant a dominant Erica Enders during the 2022 NHRA Camping World Drag Racing Series season, as the standout turned in one of the most dominant seasons in recent Pro Stock history.
21 Nov 2022
Posted by NHRA.com staff
2022 NHRA world champion

A determined Erica Enders meant a dominant Erica Enders during the 2022 NHRA Camping World Drag Racing Series season, as the standout turned in one of the most dominant seasons in recent Pro Stock history.

Enders rolled to her fifth world title in masterful fashion in her Melling Performance/Elite Motorsports Chevrolet Camaro, clinching the title at the penultimate race of the Countdown to the Championship playoffs in Las Vegas on the strength of 10 wins. She picked up three victories where she had never won before, set a career best for wins in a single season, and won more than half the races in a highly competitive Pro Stock class to win what she wanted most at the beginning of the year: a fifth Pro Stock world championship.

“It’s been a dream come true,” Enders said. “We set out every year to win as many races as we can and try to ultimately win the championship, and having the No. 2 on the car lit a fire under our butts. We wanted to be the champs again, and that’s the mentality we’ve had. It’s been a dogfight, but I’m proud of this team. You have to be hungry and fight tooth and nail to get these wins. We’ve been pretty mean this year, and I’m thankful for it.”

Enders was incredibly motivated from the start and was focused on winning a third championship in four years after Greg Anderson rolled to the title in 2021, becoming the all-time wins leader in class history in the process. 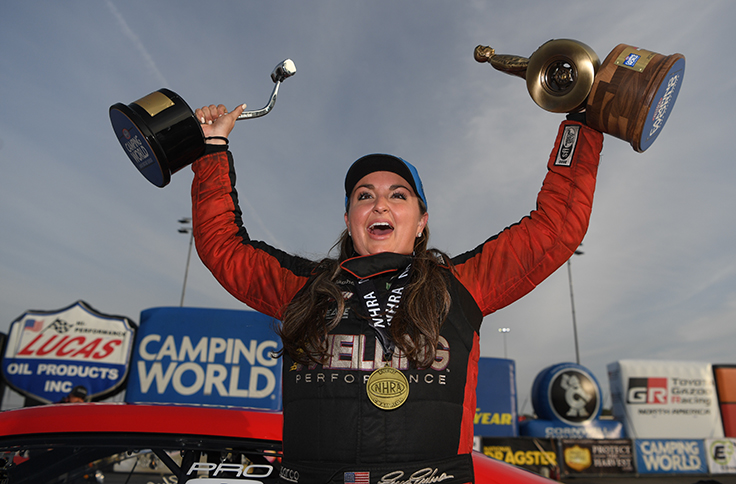 Enders didn’t waste any time, either, winning for the first time in her career at the Lucas Oil NHRA Winternationals in Pomona, also picking up the victory at the 900th race in Pro Stock history. She added two more important first-time victories in Sonoma and Reading, which opened the Countdown to the Championship in style, but an already motivated Enders got an extra boost with a first-round loss in Gainesville on a run, where she made the quickest run in class history by going 6.450 seconds at 213.57 mph.

“I got really mad in Gainesville when we set the world record and I lost on a holeshot. It was embarrassing, and I let my entire team down,” Enders said. “I knew I had to go to work, and from there, I’m pretty proud of the performance we’ve had. Through the summer, we really felt like we had something special, and we were going to keep moving forward. In the Countdown, starting off Reading on the right foot was big, and I’m really proud of the work everyone did.”

Enders went on a remarkable tear, winning in front of her hometown crowd at the final NHRA race in Houston, which came during a string of three straight wins. She won five of seven events, a stretch capped off by her impressive Sonoma win, and then went to work again in the postseason. 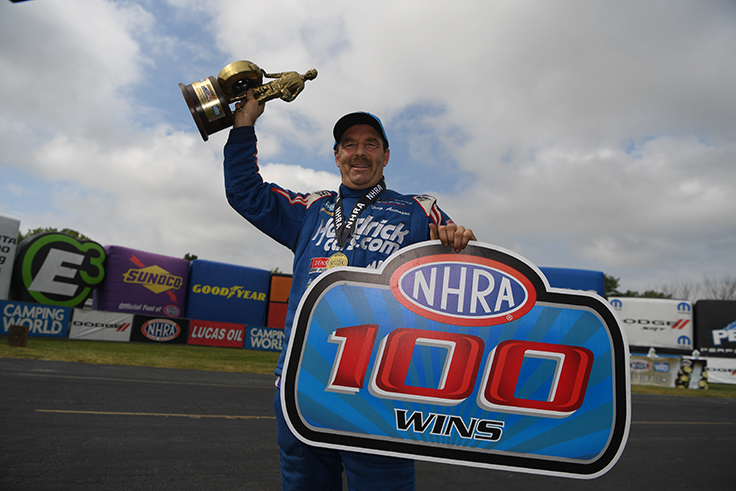 There were highlights for the rest of the standouts in the class, too, as Anderson picked up his 100th career win with his U.S. Nationals triumph, while teammate Aaron Stanfield picked up three victories in 2022. Troy Coughlin Jr. won for the first time in his Professional career, ending the year with two wins, and both Matt Hartford and Dallas Glenn also went to the winner’s circle this year.

But nobody could match Enders’ string of dominance. She won four of the first five races in the Countdown to the Championship, finishing off her terrific title run with another marquee performance in Las Vegas. She swept both races at the facility this year, with her nine victories at The Strip at Las Vegas Motor Speedway giving her the most for any Pro driver in NHRA history.

It was another accomplishment in a long list of successes this year, but a fifth championship may mean the most for Enders, who went to 13 final rounds in 2022 and now has 43 career wins. The fifth championship ties her with Anderson and Jeg Coughlin Jr. for the third-most in Pro Stock history, putting Enders just one behind Warren Johnson. From humble beginnings, Enders’ journey has been inspirational and thrilling, and as she proved in 2022, the standout may be better than ever.

“As a kid with big dreams, it makes me want to pinch myself,” Enders said. “We have worked really hard to get here, and we’ve sacrificed a lot. To put our name next to the likes of Jeg Coughlin and Greg Anderson, these guys are legends, and it’s really neat to join those guys. It’s just unbelievable, and I’m really thankful.”