Pedregon at the Pentagon: World champ gets a special trip between events

Between races in the Countdown to the Championship, two-time Funny Car world champ Cruz Pedregon and his team were able to enjoy an exclusive, behind-the-scenes tour at the Pentagon in Washington, D.C.
21 Sep 2022
Posted by NHRA.com staff
News

Between races in the Countdown to the Championship, two-time Funny Car world champ Cruz Pedregon and his team were able to enjoy an exclusive, behind-the-scenes tour at the Pentagon in Washington, D.C.

The tour took place on Monday after an invite from Brigadier General Max J. Stitzer from the United States Air Force, who also attended last weekend’s race at Maple Grove Raceway and is a longtime friend of Pedregon.

“It was really, really cool,” Pedregon said. “We’ve done several fun events with the military, and Snap-on has a great military connection, but not very many people get invited to see the Pentagon and see the things we were able to see. It was a really big honor for us.”

Pedregon, who also celebrated his birthday on Monday, has enjoyed several meaningful events with the military through the years, including Honor Flight and military crewmember swaps through his Snap-on sponsorships. 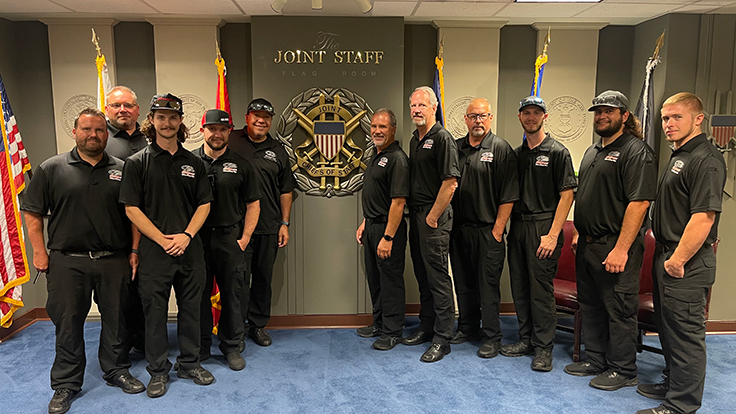 Pedregon, though, was thrilled to have his entire team participate in the Pentagon tour, which gave an extensive look inside the building.

“One thing that was very emotional was seeing the 9/11 memorial, and it was surreal to walk through the different offices of the U.S. Armed Forces,” Pedregon said. “I’m just grateful and thankful for all the people there. Max is a big fan of NHRA, and I’m grateful to call him a friend as well.”

Pedregon returns to action on the track at this weekend’s Betway NHRA Carolina Nationals, which is the second of six races in the Countdown to the Championship. The veteran is currently eighth in the Funny Car standings.