“I just love the challenge and the mental toughness this sport requires,” said Hidalgo, who sealed the deal on the Stock championship during eliminations at the Auto Club NHRA Finals then went on to win the main event in Super Stock.

“You have to be able to perform under pressure, and it took a lot of that in Pomona. I performed at a very high level, and I was very pleased with myself that weekend. Winning the championship is everybody’s dream, and to close it out at Pomona, at one of the most historic dragstrips in the country – it meant the world to me.” 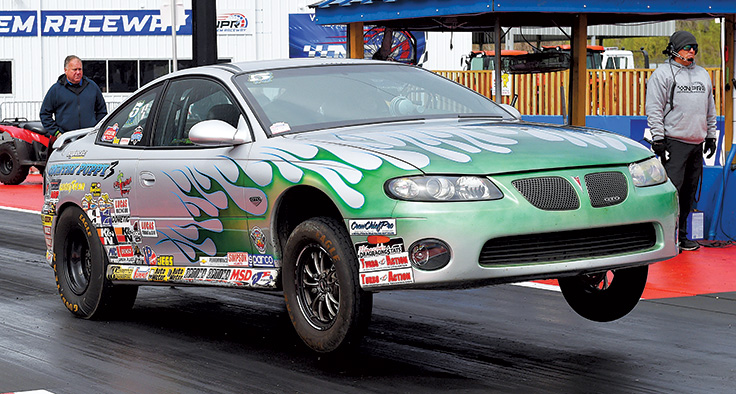 Hidalgo, an NHRA South Central Division racer based in Donaldsonville, La., had never raced in Pomona before. After a late-season charge put him in contention for the title, however, the second-generation racer knew he would have to pack it up and head west. Piloting his ’04 Pontiac GTO in E/SA, Hidalgo had a 20-point lead entering the last event of the season, but Brad Burton – a two-time champion in the category – was just as motivated to cart away the coveted series trophy when the curtain dropped.

As fate would have it, the course of events at the previous national event – the NHRA Nevada Nationals in Las Vegas – ultimately determined the outcome.

“It was a great challenge in Vegas; the ladder ended up with me falling on Brad Burton first round,” told Hidalgo, who ran dead on his number plus .008-second to strike down Burton’s breakout effort, then he concluded his own weekend in the quarterfinals. “Brad’s a very tough racer, and beating him there came out to mean something at the end.”

The Southern California sun rose brightly on a crisp Saturday in Pomona to find Hidalgo and Burton both still in the hunt. There in the fourth round, the final outcome began to take shape. Hidalgo’s quick reaction time proved crucial in his defeat of Chad Loge, and then he set his attention to the match that played out in the pair that followed his own: Burton vs. Chris Hall.

As Hall’s ’70 Camaro and Burton’s ’72 Firebird crossed the finish-line stripe, the scoreboards revealed a double breakout. With Hall’s win light flashing, Burton’s 2022 final score was locked in at 655 points, and when Hidalgo exited the next round, he matched the tally precisely. The decision came down to the Las Vegas results as a tiebreaker, and with that, Hidalgo held the upper hand. The championship was his.

“I had been pretty calm, and coming into Pomona, I did have hope that I didn’t absolutely have to win to get it done,” said Hidalgo. “Obviously, the goal is always to win – but I came in trying to take it one round at a time, one win light at a time, and let the rest fall where it may.”

The Lucas Oil Series championship was the first for the Hidalgo family, which includes Hidalgo’s father and fellow Stock competitor, Jimmy Hidalgo Sr. The two have raced together in the doorslammer category since the younger Hidalgo was 16. 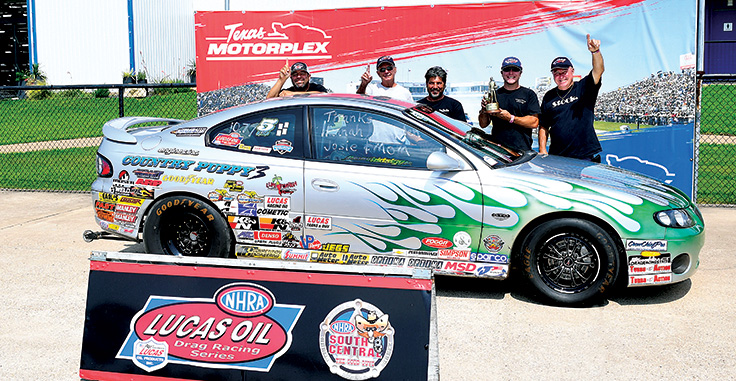 His 19th season behind the wheel in Stock began with a small glow of promise as Hidalgo reached the semifinals at the Belle Rose, La., Division 4 race, then one month later was a quarterfinalist in Noble, Okla. Early exits at both the Houston divisional and national events preceded an unfulfilling performance at the first race in the Dallas divisional, but the second act of that week at Texas Motorplex sent the pendulum swinging in a much more pleasing direction. Hidalgo claimed victory over Jeff Lopez to earn his first win of the season.

“Around the middle of the year, it turned around,” said Hidalgo. “Several years, I’ve made late-season runs, but a lot of times, it doesn’t work out the way you want. I think every year you envision this is where you want to be at the end. This year, I won a race and was just able to carry that momentum. Other than the Las Vegas division race, I was making rounds everywhere I went.”

After the Dallas triumph came a semifinal finish in an incredibly tough field at the NHRA U.S. Nationals in Indianapolis. Fueled by coming so close to glory on the hallowed grounds in Indy, Hidalgo ventured to St. Louis one month later for the national and double-divisional events. He kicked off the excursion with an invigorating victory over Chris Knudsen at the NHRA Midwest Nationals, then he closed out the next weekend with an imperative final-round defeat of fellow championship contender Joe Santangelo.

A trip to the quarterfinals at both the Las Vegas national and the Finals rounded out Hidalgo’s victorious score. The former division champ landed No. 2 in both Stock and Super Stock in the South Central Division. 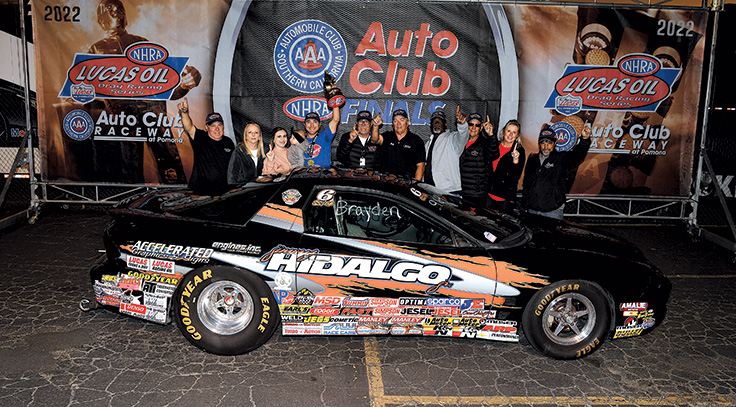 “To get the Stock championship done on Saturday and then finish it up in Super Stock with a win on Sunday at a track I’ve never been to was unforgettable,” he said. “My passion is Stock and Super Stock, and hopefully, we can build on this, get more wins, and hopefully get more championships.”