It was a longshot, but it was one that Bob Locke had to take. In the end, it paid off, and as he stood in the shadows awaiting the bright lights of the winner’s circle at the Auto Club NHRA Finals, the only thing sparkling more than Locke’s glistening new set of trophies was a gigantic, insuppressible grin.
15 Dec 2022
Kelly Wade
2022 NHRA world champion

It was a longshot, but it was one that Whiteland, Ind., Super Gas racer Bob Locke had to take. In the end, it paid off, and as he stood in the shadows awaiting the bright lights of the winner’s circle at the Auto Club NHRA Finals, the only thing sparkling more than Locke’s glistening new set of trophies was a gigantic, insuppressible grin.

Locke had more than the obvious reasons to be filled with such glee. Yes, securing the NHRA Lucas Oil Drag Racing Series Super Comp world championship by winning his first national event in his first final round at the last race of the season was the stuff dreams are made of. But, approximately 19 months prior to the joyful celebration, Locke had been diagnosed with Stage 4 prostate cancer. The real dream come true is that although he’s still receiving treatment for the next few months, Locke’s doctor has all but declared the disease a memory.

“Through God’s hands, we’ve made great strides,” said Locke, with wife Ronda and their jubilant family beside him. “[My] blood numbers and everything are fantastic; it’s nothing short of miraculous. And now this. It’s all just incredible.”

Before dipping his toes into the Super Gas category in the late 2000s, Locke was an avid bracket racer. The 9.90 class appealed to him, but it didn’t grab his full attention until last year, when he ran the full schedule for the first time. Locke claimed victory at the division race in Columbus – his second career divisional win – in 2021, but he came into the 2022 season without so much as a peek at the inside of a final on the national stage.

This year, his racing schedule came with a delayed start, but a runner-up at the NHRA North Central Division race at Summit Motorsports Park in June was proper footing for efficient progress. After going a couple of rounds at the JEGS NHRA SPORTSnationals in Columbus, he reached the final again at a division race that began at Route 66 Raceway and concluded in Bowling Green, Ky. Another round-win at the divisional in Earlsville, Iowa, preceded a plan-altering performance at World Wide Technology Raceway in St. Louis.

“We weren’t chasing national points at the beginning of the year,” admitted Locke. “We just weren’t ready. We knew we were going to run all the divisionals and do the best we could in Division 3, but then some of the nationals we went to exceeded what we thought we could do. We had to keep going.”

After a semifinal performance at the NHRA Midwest Nationals in St. Louis, Locke and company stayed on at World Wide Technology Raceway for the divisional doubleheader. In the first race, he was runner-up. In the second, he scored the win.

“At the time, we still weren’t sure we were going to chase the title,” he recalled. “But Facebook blew up. We had so many people asking how they could help get us there. Friends of ours, the Butners [fellow racers Bo and Randi Lyn], put up a post on Facebook that made all the difference in the world. We had more than a little help, and when it was all said and done, we had no choice but to come. The support from the racing community was beyond amazing.”

And so, the Locke family loaded up and headed west for the Las Vegas national and division races and the season closer in Pomona. Uncomfortably, the first leg of the journey gave them pause to ponder.

“We came into the national event knowing that the weather conditions and everything would be different at Vegas, and we knew we needed all of our practice runs to figure it out,” he said. “Well, we had some problems.”

While putting new tires on his ’57 Corvette roadster at The Strip at Las Vegas Motor Speedway, Locke noticed the rotor on the right side was completely broken. Thankful to have found the issue and avert major catastrophe, Locke fixed the problem only to uncover an issue with the caliper.

“Before it was all done, we replaced both calipers and a master cylinder, and we missed our first time run,” he said. “We were scrambling, didn’t get good time runs, and I missed the setup in round one. We lost.”

The painful fall from the high they’d been riding on did not deter the team, and they prepared for the divisional there the next weekend.

“We felt a lot better and like we had a handle on it,” he continued. “We won first round, but then I went -.002 red in round two. We were a little defeated when we left Vegas. We still knew it was possible because [closest competitor] Phil Unruh hadn’t gained anything. But Vegas was a tough time.”

Fast forward to Pomona, more than 2,000 miles from home, and a win-or-get-nothing scenario. Unperturbed, Locke launched into eliminations with a series of steady reaction times and victories over Jason Kenny, Damon Bustamonte, Matt Treadway, and Evan Kowalksi en route to the critical final round. Aiming at the target remarkably well, Locke was 9.90 at the final stripe in all but two of six elimination rounds.

In the final, 2020 Super Gas champion Brian Preszler was the only one left standing between Locke and the world title, and he’d come too far to come up short. Locke was better at both ends of the racetrack to etch his name in Super Gas history. 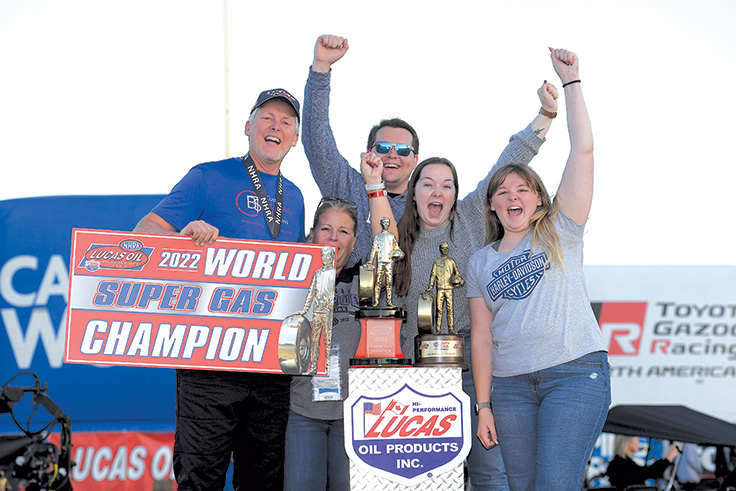 “We’re just having so much fun,” he said, just before stepping in front of the flashing cameras in the winner’s circle. “That’s really been our motto the whole time. We committed it to God and put our faith in the results. Not that God would make us win – that’s silly – but I believe he allowed us to do our best and have some success in racing to show us how much he cares for us. He gave us an amazing year, and not just in racing.”

Locke expressed enormous gratitude for those who have supported his racing endeavors.

“First and foremost, I have to thank my wife [Ronda]. I simply wouldn’t do this without her,” he said. “I’d also like to thank Custom Business & Tax Solutions; Woody’s Automotive for supplying a great engine; Two Lane Performance and Automotion Race Cars for always helping with parts and chassis work; Crew Chief Pro Software for incredible prediction and planning tools; Indy Racing Fuels; Coan Transmission and Converters; K&R Performance Engineering for always being available to help with questions and problems; Advanced Product Design for great products and technical help; This is Bracket Racing Elite for the resources I need to make me a better racer; and all of our friends across the country who encouraged us to chase our dream and helped make it happen.”